National Liberation Front (NLF), 3 Years National Liberation Front, December 20th, 1963, Perforation 11.0, Michel Nr. NLF 1-3; ,  After the Geneva Convention in July of 1954 it was agreed by the world powers and the Viet Minh to end the First Indochinese War and divide the country at the 17th Parallel. Ho Chi Minh’s Government began ruling the North and Bao Dai the South. The idea was that this division was going to be temporary and that a country wide election would be held two years later in July of 1956 to decide the political fate of the country and reunite both parts. This election never took place as the South kept delaying the issue. Because of his success in winning over the French colonialists and because of his nationalistic fervor that was reflected in the population as a whole, Ho Chi Minh was beloved all over the country and it was clear to Bao Dai that he would lose the an election and with that power. As the years dragged on a discussion started within the North Vietnamese Government if the reunification should be attempted by force and if hostilities should commence. For a while the moderate elements in the party surrounding Ho Chi Minh were able to prevent hostilities but by 1960 the more militaristic elements in the Government prevailed. The situation in the South also had become explosive. The Americans had installed Ngo Dinh Diem as President in 1955 and he was rather unpopular within the population as he was pursuing former Viet Minh cadre aggressively, was loathed for the land reform he pursued by farmers and suppressed religious sects in order to consolidate his power. In 1956/1957 a first resistance movement was founded and on December 20th, 1960 the National Liberation Front for the Liberation of South Vietnam was formally declared. While it was a pretty homogenous mixture of Viet Minh supporters, farmers, Vietnamese Nationalists and religious sects it was clearly dominated by the Communist Party in the North. As a guerrilla army the NLF operated in the underground and communicated among each other via messengers. The letters carried by them were mostly handmade, had no markings beyond coded addresses and senders and were usually immediately destroyed upon receipt. Being caught with one of them would have meant a death sentence at the hand of the South Vietnamese regime. The NLF did not transport any civilian mail (i.e. mail from civilian to civilian). The population in South Vietnam continued to use the South Vietnamese Postal Administration and its stamps. Nevertheless, on October 5th, 1963, three stamps were produced by the Tien Bo Printing House in the North for the NLF. They were inscribed with “Mat Tran Dan Toc Giai Phong Mien Nam Viet Nam” (=National Liberation Front for South Vietnam”) and carried “20” nominals. They were supposed to be based on the currency that was also produced for the NLF in 1963 but these notes, printed in the Peoples Republic of China, were never issued. A plan to use the notes as “Military Payment Certificates” after the fall of South Vietnam also never came to pass as most of them were captured by American and South Vietnamese troops during the surprise incursion into Cambodia in 1970. 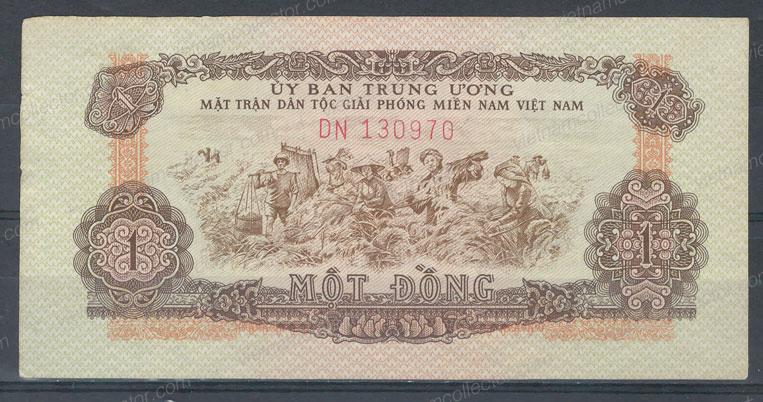 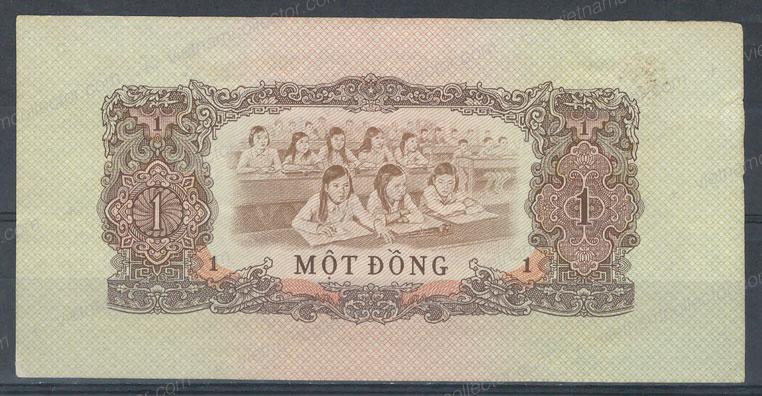 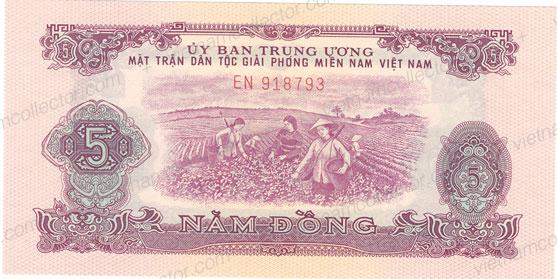 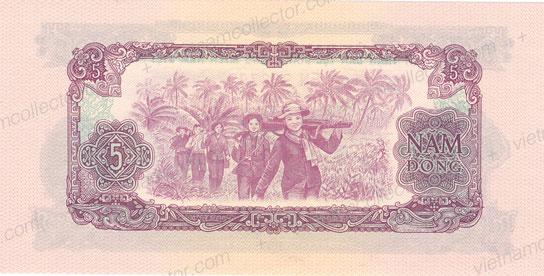 It was probably clear to the NLF leadership that their own currency would not be used for quite a while and in order to provide flexibility, the early postage stamps did not show and currency unit but simply a nominal. The idea behind this probably was, according to Ta Phi Long, that the stamps could be used in either North- or South Vietnamese Dong. So “20” could mean North Vietnamese xu or South Vietnamese Dong. Postage rates in the North and South were quite different. The standard letter rate in the North was kept fixed from April 15th, 1959 until after reunification of the country in 1976 at 12xu. In the South the same letter already cost 3 Dong in 1963 and steadily rose with inflation to 25 Dong towards the end of the war in 1974.

NLF stamps did not find any postal use until May of 1974 (one letter known which may be or may not be authentic) when the NLF and the North Vietnamese Army had already secured larger swaths of territory in the South and hence could control the postal administration. So the large majority of NLF stamps have to be seen more as propaganda vignettes or donation receipts. They were primarily issued to spread the word of the NLF struggle to the world and as importantly, to collect funds for the cause. Also the NLF was not recognized by the UPU so the stamps could not be used for any mail abroad. As a result most of these stamps are only available mint and with cancels that were never used postally but simply favor cancelled to please collectors and to increase revenue.

Nevertheless, while no civilian mail was processed by the NLF, there was military mail that went from North to South and the other way. Again, these letters carries very few identifying marks beyond the Hom Thu number that was designated to a particular unit. Here are the administrative districts used by NLF for the underground army in the South. The first number in the Hom Thu number often allows for a geographic allocation on thus basis. 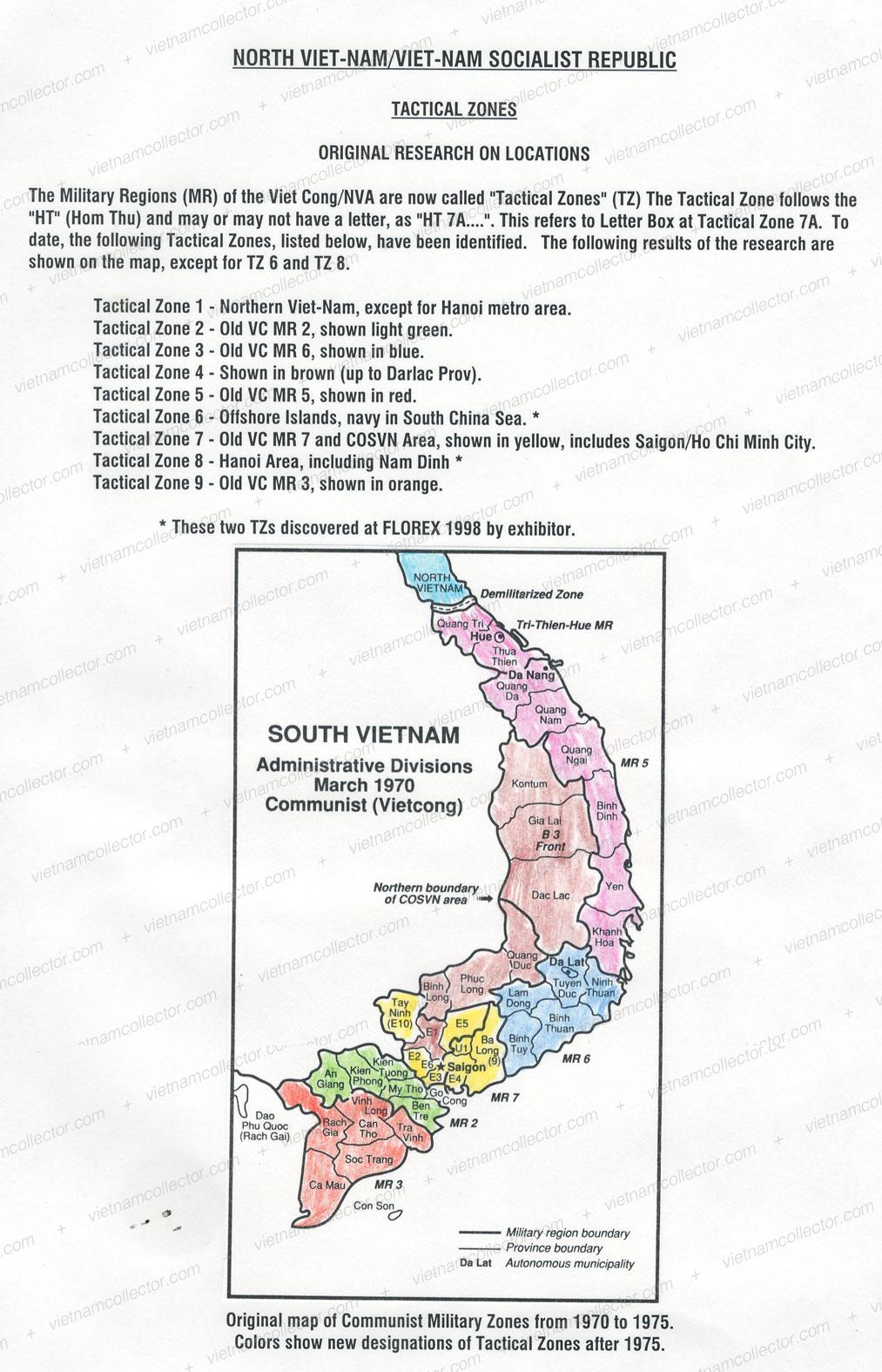 Here is the mint set. It was produced in sheets of 50 stamps and perforation 11.0. Note that the basic design is the same and only the foreign language inscription changes from English to French to Spanish. The large foreign language inscription also makes it clear that these stamps were basically made for foreign collectors and not the South Vietnamese population at large.

A small plate error does occur. Below is a mint 20x stamp with the Spanish inscription that shows a yellow dot under “Phong”.

The error does in fact occur repeatedly which can be seen on this mint block of four on which the top left stamp shows the error.

Detailed scan of the plate error 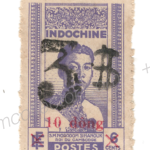 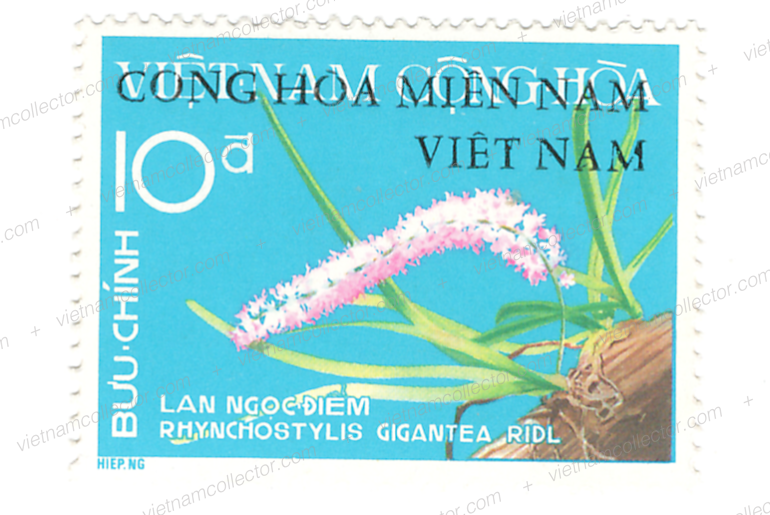