North Vietnam, 10. Anniversary of the Battle of Dien Bien Phu, May 7th, 1964, Michel Nr. 310-313, Block 9; Four stamps for the pivotal battle of 1954 were issued in the nominals of 3 xu, 6 xu and 12 xu (two stamps).The stamps were released perforated (11.0) and im-perforated. There was also a souvenir sheet issued (imperforate only) that featured the entire set.

Here is the mint imperforate set in pairs:

This is the imperforate souvenir sheet that was issued for the occasion. 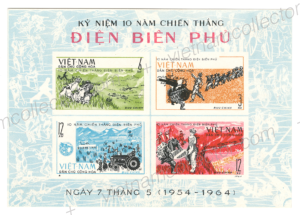 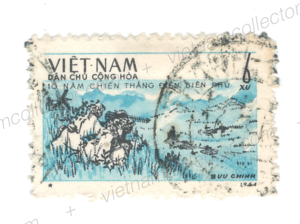 Beware of bogus cancels that are sometimes applied to make a poorly preserved souvenir-sheet more attractive. Below is a Bien Dien PHu sheet that carries an illegible cancel that is clearly not from Vietnam. 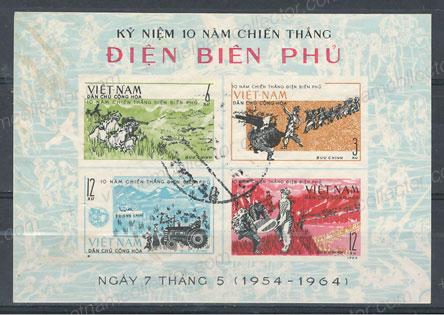 Here are very rare trial prof sheetlets of all four stamps. Note the different color from the final issued stamp on the 3xu value. 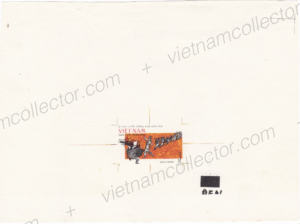 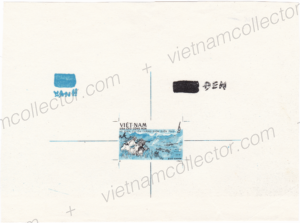 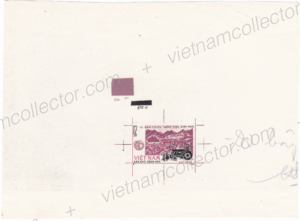 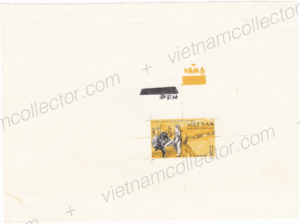 Here is an error stamp that shows a significant passer-shift of the black color downwards on a 6xu imperforate stamp. 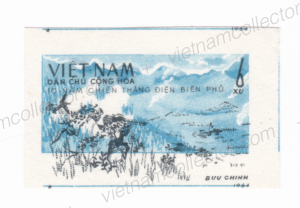 Registered letter sent to Klewitz on the First Day of Issuance with the complete set. The overall postage amounted to 73 xu which was too little for a registered letter to West Germany (Tariff of 1.1 Dong). However, the clever sender had duped the postal clerk into thinking the letter was actually directed to East Germany as he wrote “Germany RDA” which stood for East Germany. The required postage to that destination was only 72 xu and so the postal clerk was happy with the overall franking. 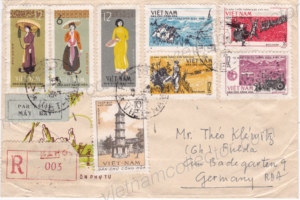 Rare single franking of one of the 12xu Dien Bien Phu stamps on a local letter from Phu Bin to Hanoi. Most local letters were lost due to the longtime war, the aggressive climate or recycling due to raw material shortages. 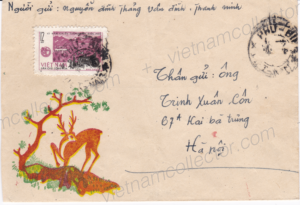 Similar franking of the 12xu value but this time the letter was international and directed to East Germany. This documents that the standard domestic letter tariff and the letter tariff to fellow socialist countries were identical. 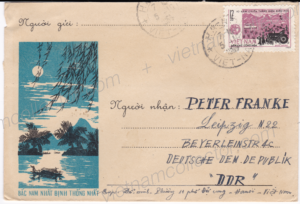 Very rare air-mail letter from October of 1964 featuring an imperforate 50xu Animal stamp plus the 3xu Dien Bien PHu stamp for an overall postage of 53xu. Imperforate stamps on postally used cover are very hard to find. The standard letter rate to Czechoslovakia was only 12xu so either this letter was much heavier than the standard 20g or it was philatelcally inspired. 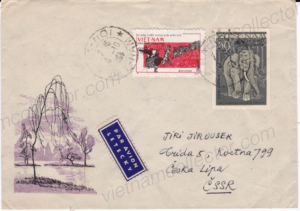 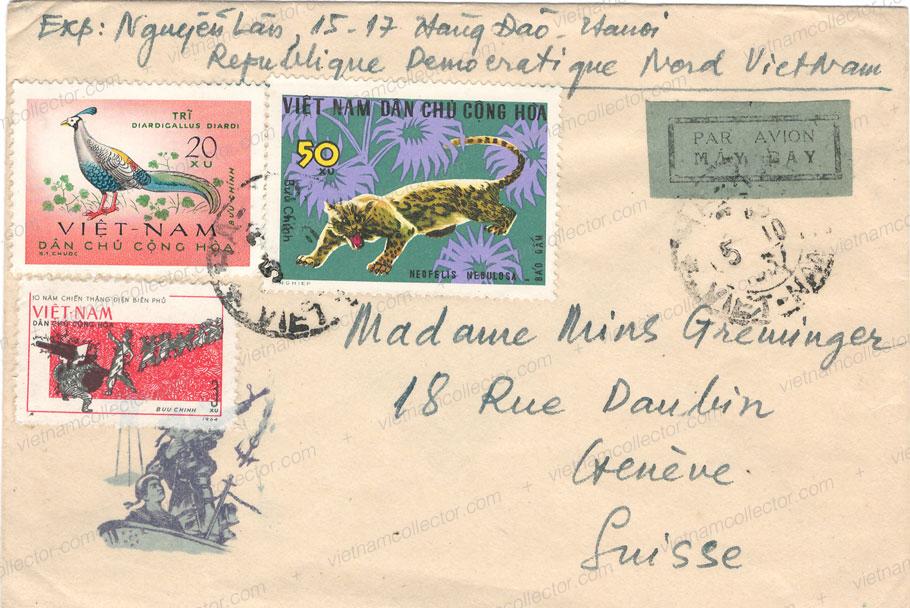 Very rare express mail letter sent to Klewitz in February of 1970 . The letter contains the entire imperforate set of the Dien Bine Phu issue. Imperfroate stamps on postal used cover are very rare. The overall postage amounted to 1.61 Dong. The standard letter rate to West Germany amounted to 50 xu, the registration fee to 60 xu and the express mail fee to 50 xu for a required postage of 1.60 Dong. 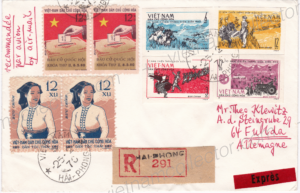 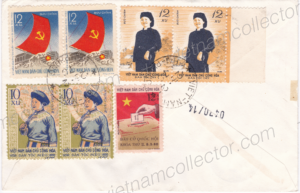 Very rare letter featuring the im-perforated souvenir sheet of the Dien Bien Phu set- Souvenir sheets on postally used cover are very rare. Only a handful of other examples exist. The letter is franked with 53 xu which was slightly in excess of the required rate of 50 xu. 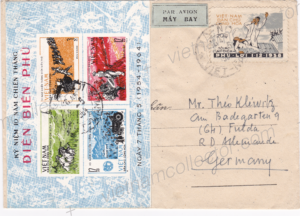 Mixed franking using two of the 12xu Costumes stamps plus other NVN stamps (including one of the 12xu Dien Bien Ph stamps) for an overall franking of 60xu (Probably over-franked) on an air-mail letter to East Germany. 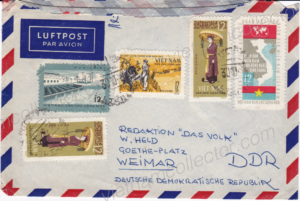 Mixed franking of the 12xu Bridge stamp with other NVN stamps (including the 3xu Dien Boen Phu stamp) for an overall postage of 75xu. The required postage to France was only 50xu for a standard letter so this one must have been heavier the 20g. 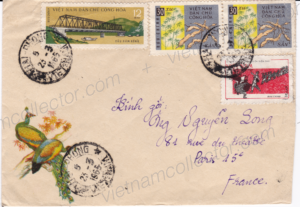 Rare express mail letter sent to Klewitz on the First Day Issuance in West Germany. The letter also carries the special cachet that was produced for the occasion. Rather playful use of the Dien Bine Phu stamps from 1954/1956 and 1964. The old stamps had already been devalued on March 1st, 1959 by 1,000:1 which meant that the 60 Dong the two values initially represented were only worth 0.06  New Dong in 1974. The over-all postage of the letter only amounted to 57.06 Dong which is short of the proper tariff for a standard express mail letter (Tariff 1.00). The under-franking was apparently not noticed in Vietnam and Germany and the letter was delivered without postage due charges. Fulda arrival cancel on the reverse. 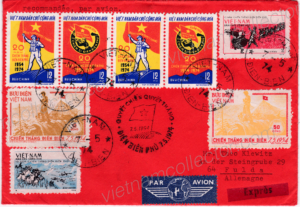 Late usage (May of 1974) of the perforated 3xu and imperforate 6xu Dien Bien Phu stamps  together with a 50xu Wood Cut series for an overall postage of 59xu on an air-mail letter sent to Gregor Schwirtz. Imperforate stamps on postally used cover are very rare. 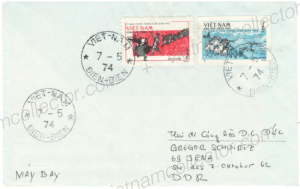 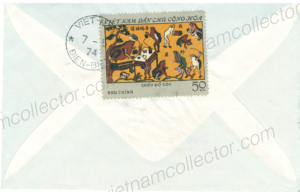 Very rare express mail letter sent to Klewitz in October of 1976. The letter carries half of the im-perforated tropical fish  plus a stamps from the Dien Bien Phu set for an overall postage of 2.26 Dong. Im-perforated stamps on postally used cover are very rare. Fulda arrival cancel on the reverse. 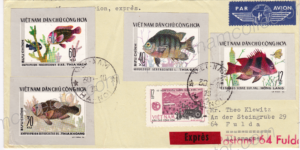 Another rare registered express mail letter sent from Dien-Bien Phu to Klewitz in October of 1980. The letter carries the other values of the perforated Fish set plus other NVN stamps for a total postage of 4.80 Dong. Late usage of the 6 xu Dien Bien Phu stamp probably owed to the senders location. Fulda arrival cancel on the reverse. Green Fulda custom cachet on front.

Rare registered express mail letter sent from Dien Bien Phu to Klewitz in April of 1980. It carries pairs of the set plus the rare 6 xu Flower stamp and parts of the Dien Bien Phu set for an overall postage of 4.81 Dong. Unusual hand-written R-label. Fulda arrival cancel the reverse. Fragment of the green Fulda custom cachet on front. 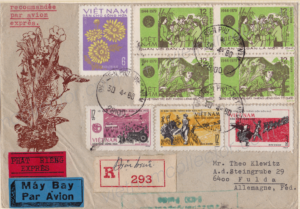 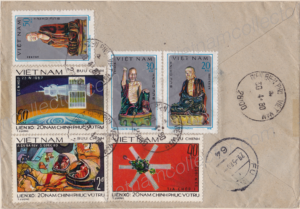 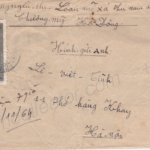