Unified Vietnam, World Postal Congress Hamburg, June 19th, 1984, Michel Nr. 1452, Block 28; A single souvenir-sheet with a nominal of 10D and in perforation 13 and imperforate was issued.

Here is the mint perforated souvenir-sheet 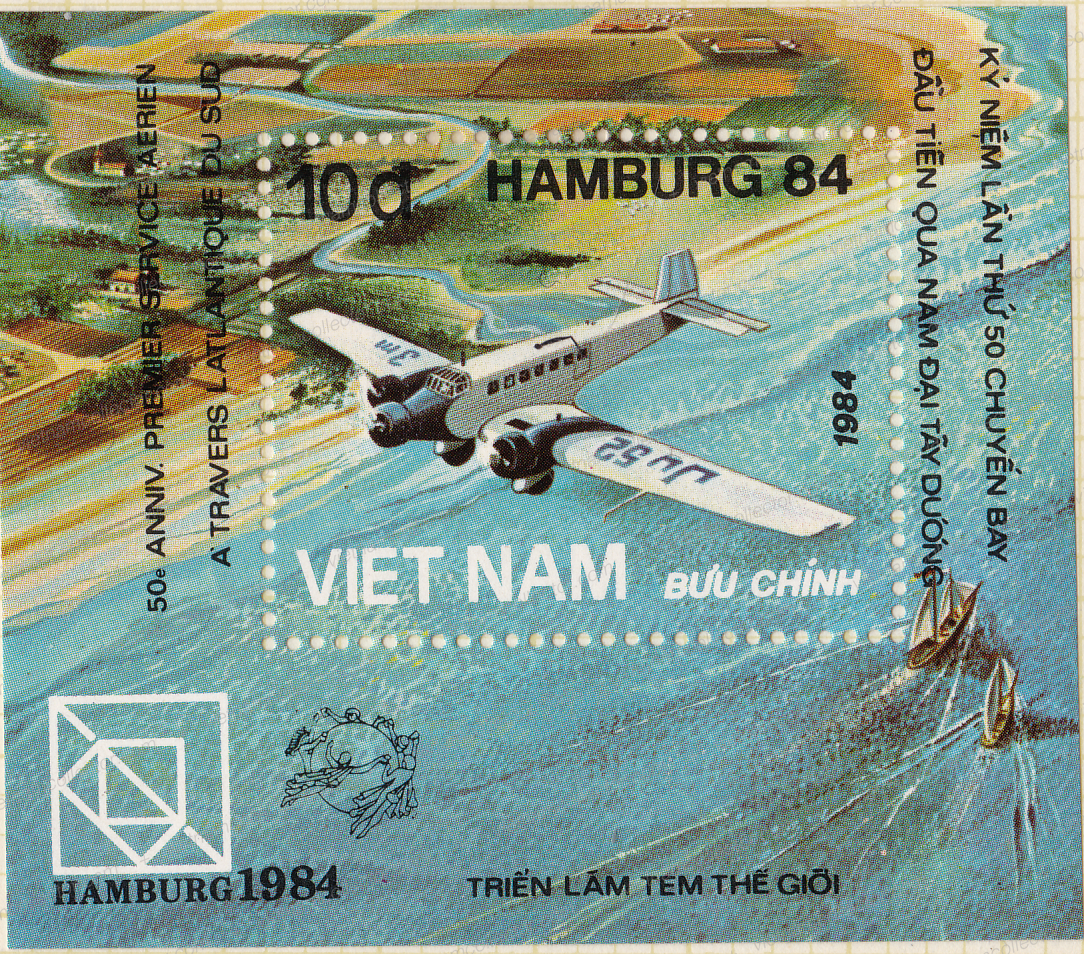 Here is the mint imperforate souvenir-sheet. 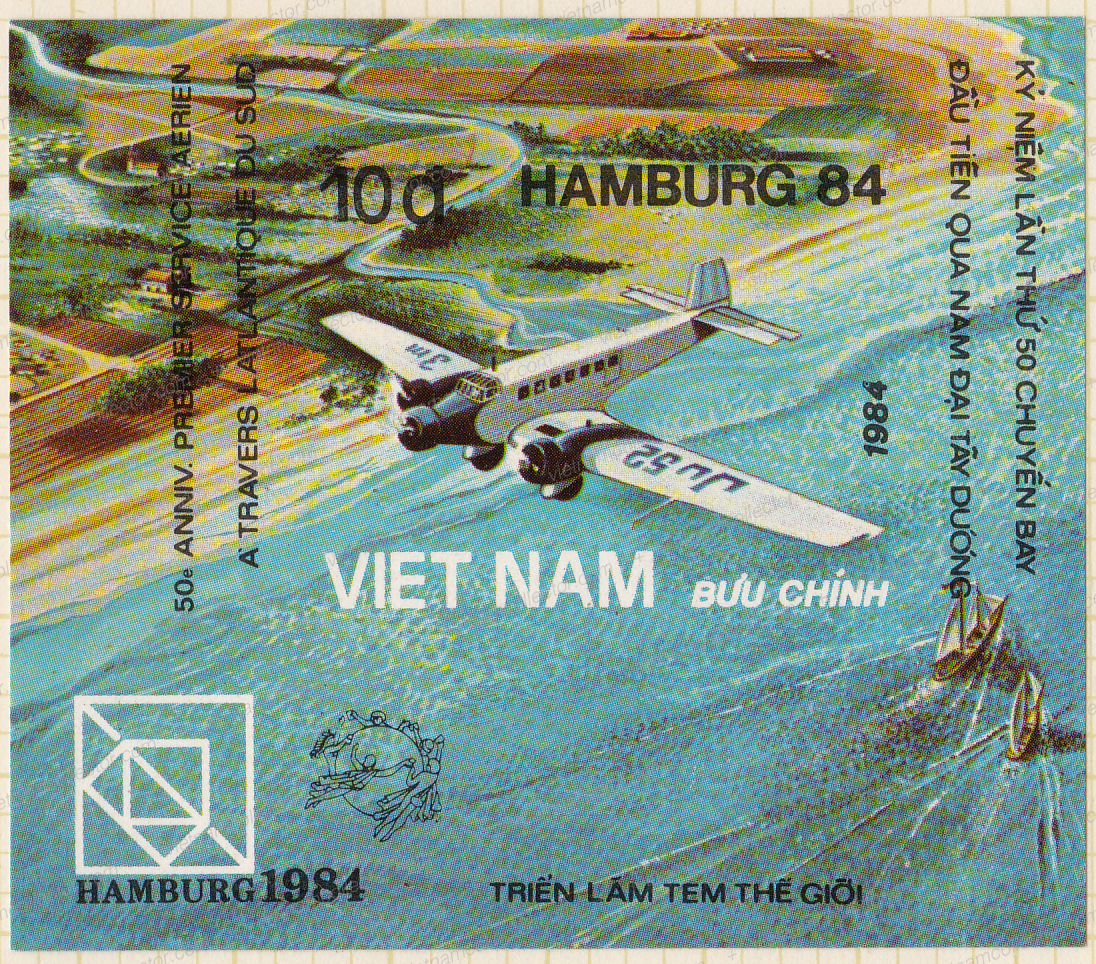 First Day Cover with special cancel designed for the occasion with the perforated souvenir-sheet. The decal shows the West Africa-South America route that was served by the Junker 52. The JU 52 was collegially called “Aunt Ju” by the German population and was the most well known German passenger airplane until the  end of the second world war. 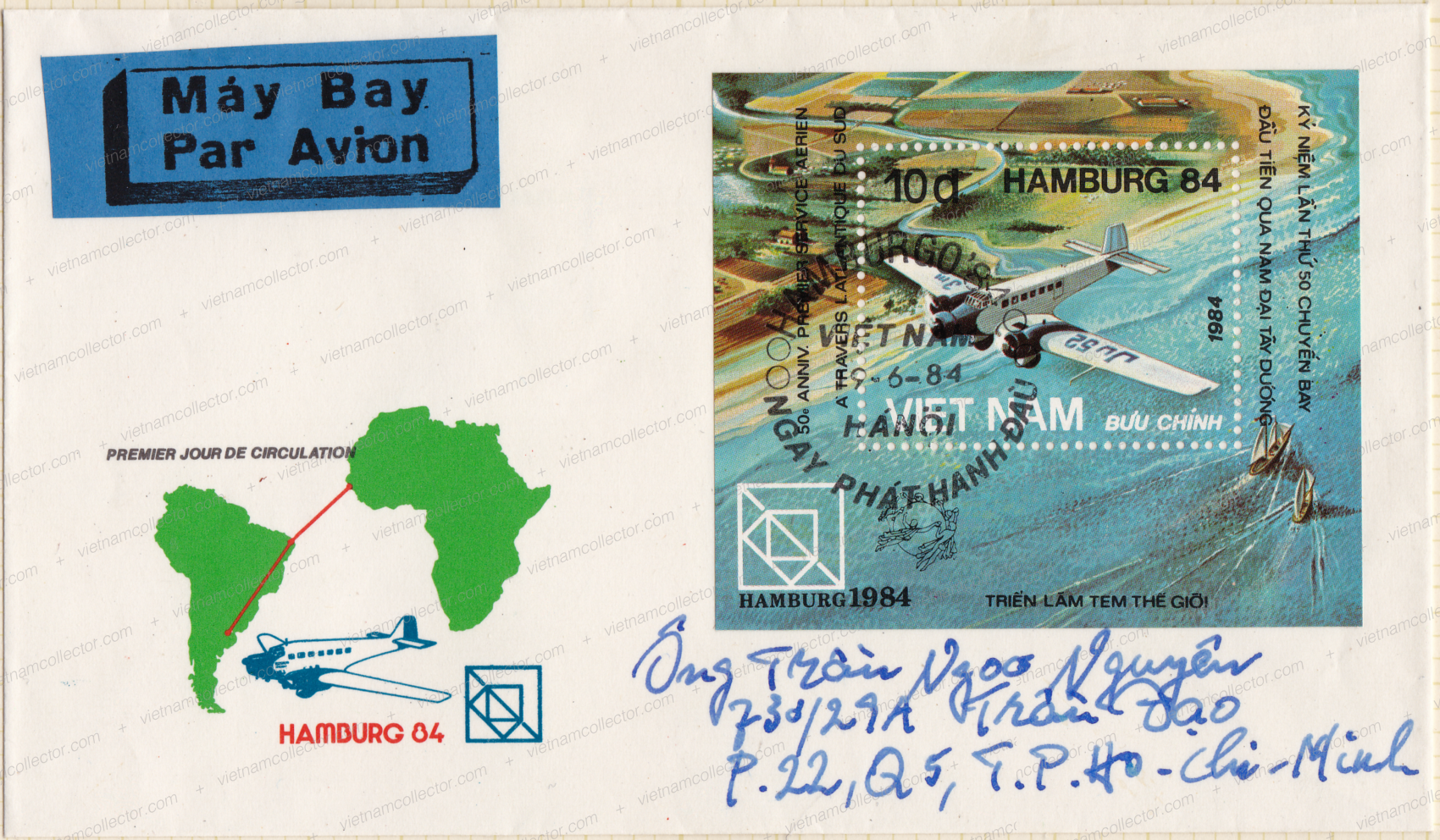 Registered air mail letter sent in August of 1984 from Quan 5 (Cholon) to Klewitz. The letter carries the perforated World Postal Congress souvenir-sheet along with some of the provisional overprints, stamps from the Karl Marx and Day pf the Environment sets for an overall postage of 52.60D. Souvenir-sheets on postally used cover are very rare. Green Fulda custom cachet on front. 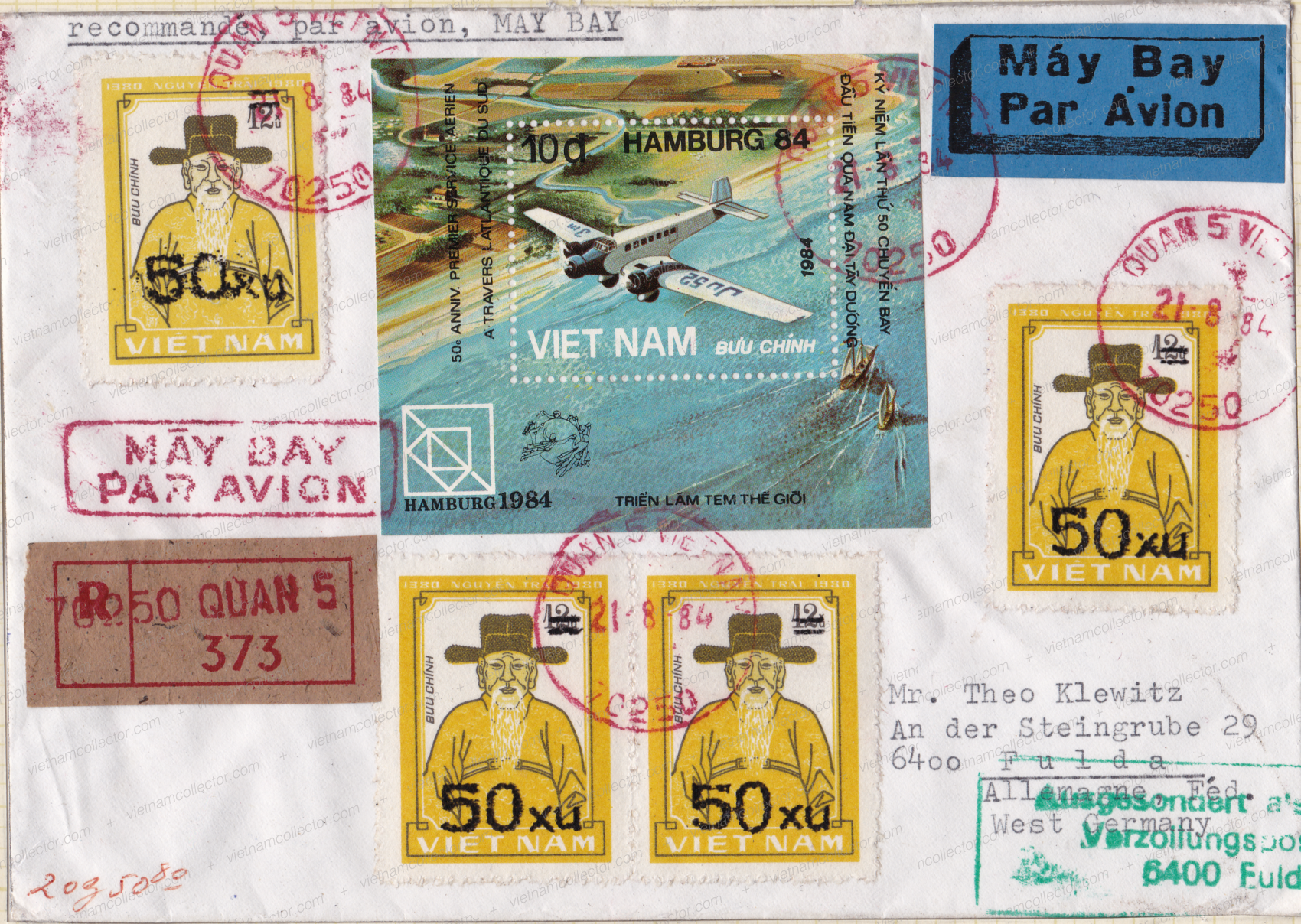 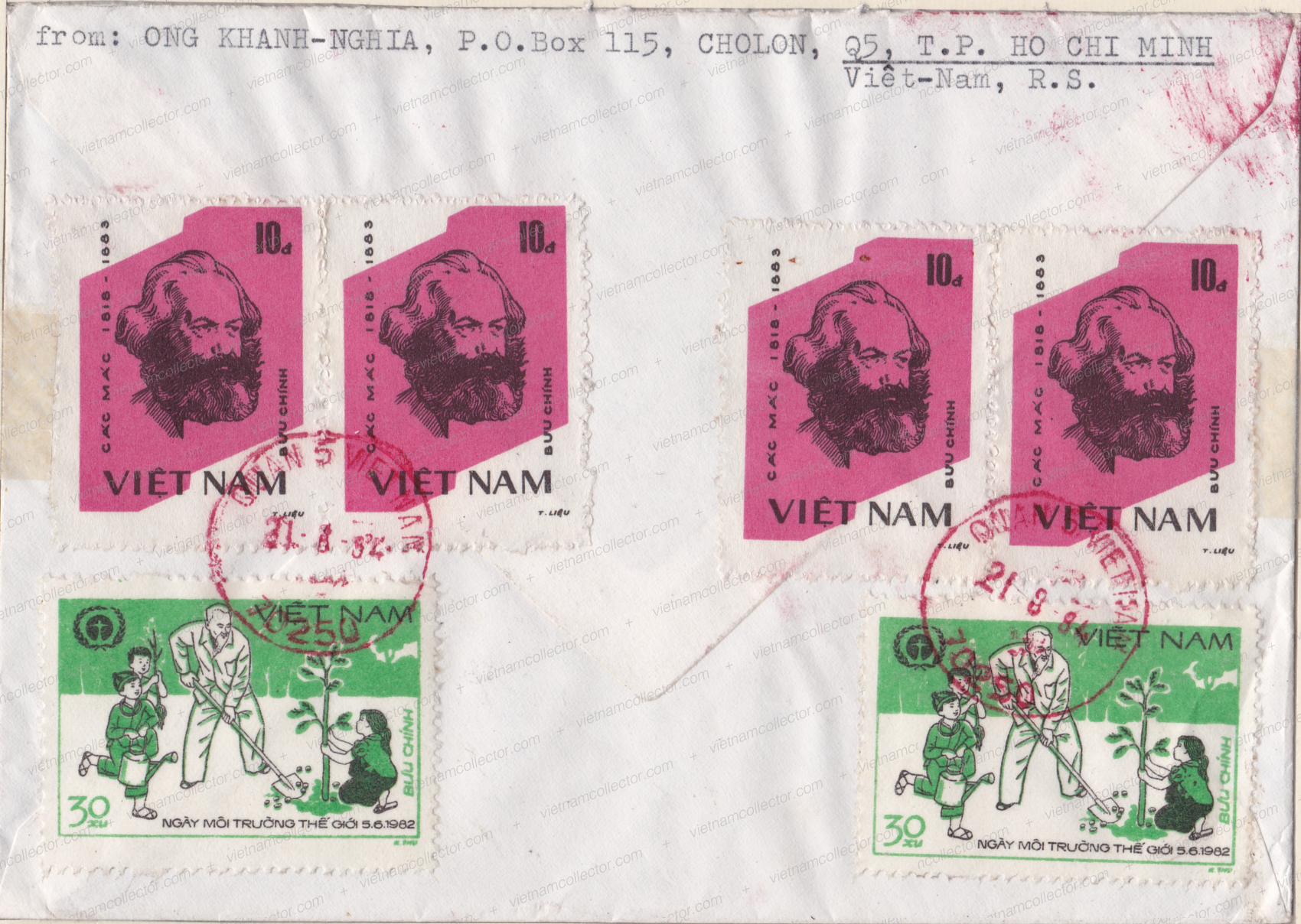 Registered air mail letter sent in October of 1986 from Ho Chi Minh City to Klewitz. The letter represents a mixed currency franking as the Dong was devalued by 10:1 on September 14th, 1985. The letter carries the imperforate World Postal Congress souvenir-sheet and other stamps in the old Dong for a total of 15.70D (worth 1.57 New Dong at the time of mailing) plus stamps nominated in New Dong for 22ND for an overall postage of 23.57ND. The letter also carries the 50xu Friendship between Vietnam,Laos and Cambodia stamp in two color variations. Souvenir-Sheets and error stamps on postally used cover are very rare. The zero money red free frank was required to produce the R-label that came out of the same machine. Partial green Fulda custom cachet on front.

Registered air mail letter sent in July of 1987 as a mixed currency franking from Ho Chi Minh City to Klewitz. The letter carries perforated stamps from the Year of Peace, Birds, Labor Day, National Assembly, Communist Party sets and the souvenir-sheet from the Post Congress Hamburg set. Souvenir-Sheets on postally used cover are very rare. Apart from the Post Congress Hamburg souvenir-sheet all other stamps were already denominated in new Dong.  The Vietnamese Government conducted a devaluation of the Dong on September 14th, 1985. This meant that all stamps issued prior to this date were only worth one tenth at the time of mailing. The overall postage hence amounted to  10.00 oD =1 nD. plus the stamps in new Dong (44 nD) plus the red free frank for 319 nD for 364 nD. Fragment of the green Fulda custom cachet on front.