South Vietnam; July 1st 1960; Military Free Frank (Michel Nr. M 1a); this stamp was issued without a nominal value for members of the South Vietnamese military (Army of the Republic of Vietnam) and handed out at no charge and at a rate of two stamps per month. This practice ended the postage free military mail status that existed until then. The free frank was sufficient for a standard letter at the surface rate. Additional services (i.e air mail, registered letters, express letters, etc.) had to be paid in addition at the prevailing tariff. Contrary to most South Vietnamese stamps this stamp was produced locally in Vietnam. As a result it is of poorer printing quality and man error stamps that normally would have been destroyed by the printer came to market.

A folded letter aerogramme with the same image was produced in two printings.

The first one is darker in colors and the red inscription in Vietnamese on the reverse is longer. The second is lighter in colors and the red inscription in Vietnamese on the reverse is longer. Block of 30 stamps that shows two errors: the yellow-orange color is moved 8mm too high creating a white path in the middle of the stamp and all of the dark-brown/black color is missing. 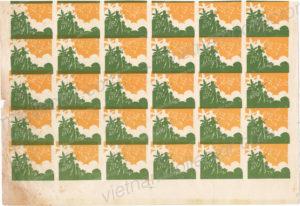 Philatelic product using the first printing of the stamp (dark green/yellow-orange color) on a domestic letter sent in June of 1973. Nothing is known about KBC 3736 except that letters from the unit have only shown up between June 13th through June 30th of 1973. Cancelled with the “mute” Quan Buu military cancel. The Postage Due Stamps of South Vietnam