South Vietnam, 1. Anniversary of the Arrival of Evacuees from North Vietnam, October 11th, 1955, Michel Nr. SVN 102-107, Michel Nr. SVN 126; The separation of the country in 1954 into a Northern and Southern part precipitated a refugee wave of people primarily moving from the communist North to the capitalist South. Six stamps in nominals of 70c (Q:500,000), 80c (Q:500,000), 10P (Q:200,000), 20P (Q:200,000), 35P (Q:500,000) and 100P (Q:100,000) were issued in perforation 13.0. SICP member Kenneth Lake reports in the SICP Journal Nr.10 of February, 1973 that proofs of these stamps were originally prepared with the inscription of L’Exode (= The Exodus). This was a political reference to the fact that a large number of Vietnamese emigrated from North Vietnam to South Vietnam after the Geneva Agreement. However, this provocative reference was removed from the stamps that were ultimately issued. Instead only on the 35P stamps the reference “Campaign/Operation Brotherhood” was printed and even that reference had to be blocked out later on after protests from the North (see additional remarks below). 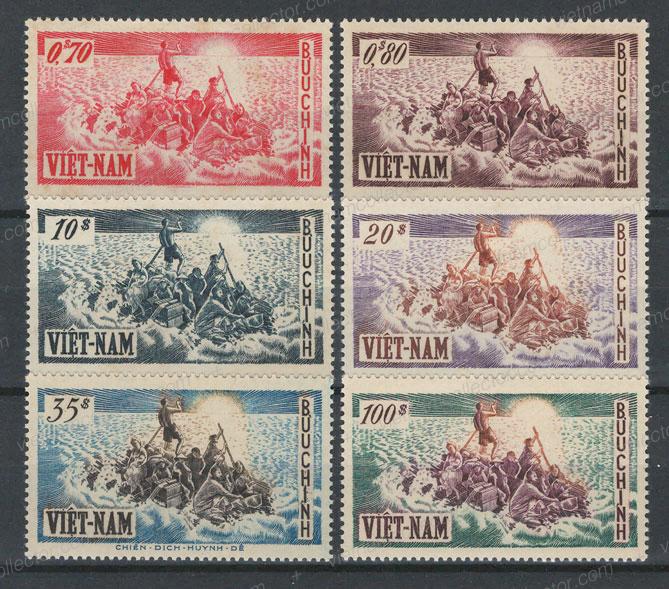 The inscription at the bottom the 35P stamp “Chien Dich Huyhn De” (= Campaign/Operation Brotherhood) referred to a Philippine based humanitarian operation that sent doctors and nurses to Vietnam in 1954. Right after the division of the country following the Geneva Agreement a propaganda war ensued between the South and North as to which political system was preferable. This was geared towards the elections that had been scheduled for two years after the Agreement which of course both sides hoped to win and which ultimately were never held. The inscription can be seen as part of this propaganda war as it used the goodwill created by the private organization “Operation Brotherhood” by suggesting that the humanitarian work done by the organization was in fact the work of the South Vietnamese regime. This was politically not acceptable to the North as stamps from the State of Vietnam and the Republic of Vietnam could be used in the North until the end of March in 1955. Most likely protests from the North ensued to end this provocation and on August 6th, 1956 the remaining unsold stamps received an overprint in the shape of a black bar essentially blocking out the inscription. It is not known how many stamps were overprinted but overprinted stamps are clearly more numerous.

Members of a Vietnamese stamp club have also suggested that the overprinted stamp signaled the end of a donation campaign by the Vietnamese Government. The 35 Piastre stamp represented 1 U.S. Dollar at the time. According to this view the Vietnamese postal system vouched to donate up to U.S.$1 million of the sales proceeds of the 35 Piastre stamp to the United Nations quasi as a thank you gesture for “Operation Brotherhood”. When the U.S. $ 1 million target had been reached in 1956 all remaining stamps were supposedly overprinted to signal the end of the donation campaign. The editor is unable to prove or disprove this theory.  The Republic of Vietnam had issued stamps with donation surcharges in 1952 (Red Cross and War Invalids) so it is unclear why the postal authorities would not have simply continued in this tradition by adding a 35 Piastre surcharge in addition to the nominal amount on the stamp. Issuing the 35 Piastre nominal as a purely donation stamp would have violated UPU regulations and would have made the stamp invalid for the use on international postage (similar to the Military or War Invalid stamps issued in North Vietnam). So a direct donation of the 35 Piastre stamp to the U.N. is highly unlikely. What is more likely is that the Vietnamese Government decided to simply donate U.S. $ 1 million to the United Nations in addition to its standard membership fees in a separate transaction. Why the Government would have donated to the U.N. and not the Philippine Nation remains an open question. The editor has not found a direct link between “Operation Brotherhood” and the United Nations.

In the SICP Journal Volume 2 Nr. 1 from February of 1972 member Robert B. Potter advanced another reason for the bar overprint. He was told by the Saigon stamp dealer Dang Khan that the phrase “Chien Dich Huyhn De” stood for “War between brothers” but this is not correct. “Chien Dich Huyhn De” means Campaign/Operation  Brotherhood. So his explanation that the overprint occurred as a result of South Vietnamese Nationalists complaining that the communist in the North should not be called “Brothers” and therefore the inscription had to be blocked out is probably erroneous.

Michel lists this stamp with a separate catalogue number Nr. SVN 126. Here are the two versions of the stamp side by side. The un-overprinted stamp is definitely rarer than the overprinted one, especially in used condition.

Mint block of four of the overprinted stamp. 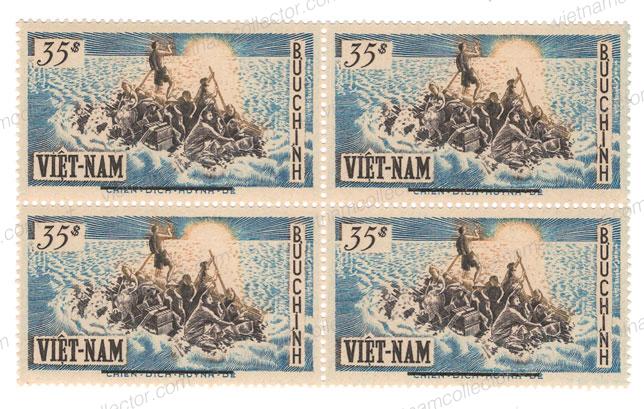 There are double and triple overprint errors, where the black bar was erroneously applied twice or thrice. Here is a single mint stamp showing a double overprint. 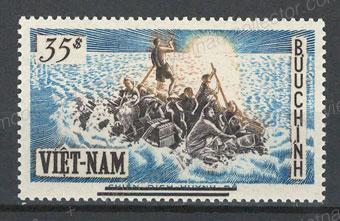 Vertical mint pair from the bottom selvage that shows a double overprint. 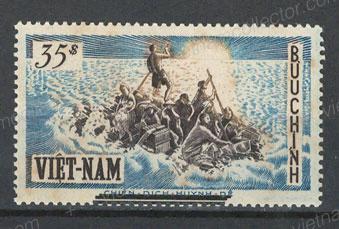 Note that forgeries of double and tripple overprints do exist. They can be identified by the slanted shape of the end of the overprint bar. On the originals the bar always has a rectangular shape.

As part of the stamp production process the South Vietnamese Postal Administration had the printing works prepare imperforate color proofs. This was done to be able to select the best color combination for the final production of the stamps. Below is an imperforate strip of five color proofs from the top part of the sheet. Note that they showed the text LExode (= The Exodus) at the bottom that was removed on the finally issued stamps. Very rare.

A very small number of Enpreuve de Luxe imperforate sheetlets, also called “Minister Blocks” were produced on light carton paper as sunken die proofs and handed out or sent to very important people of other countries. These early sheetlets are very rare and seldom come to market. They are not comparable to Enpreuve de Luxe issued later primarily for the benefit of collectors. Here is the sunken die proof of the 70c value signed by the stamp designer as well as the complete imperforate set printed on a light carton paper. Note the imprint of “L’Exode” (= The Exodus”) which was remove on the ultimately issued stamps. Very rare. 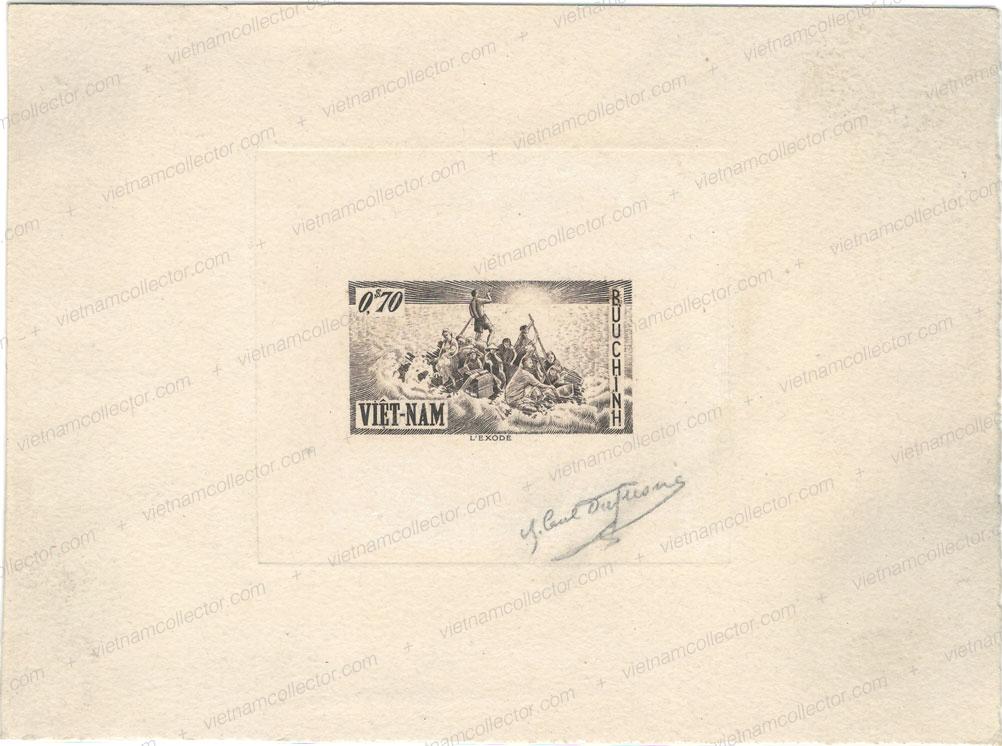 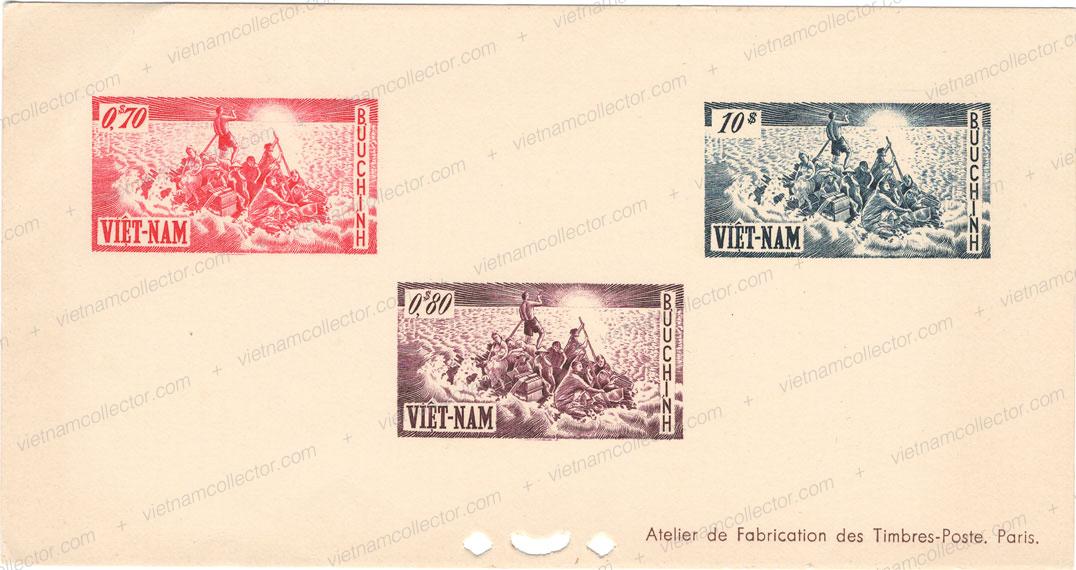 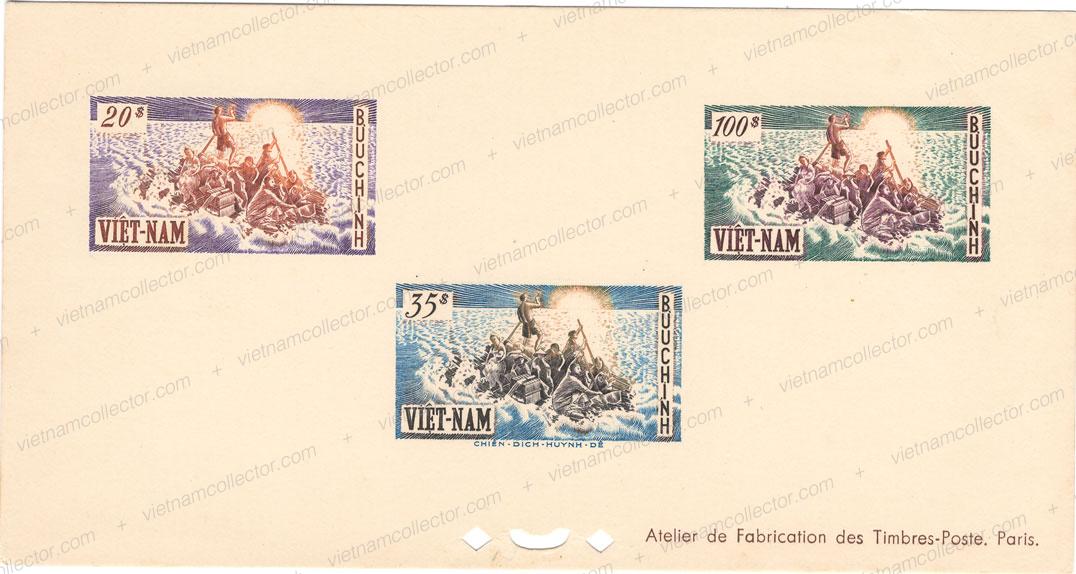 Mixed franking of the 70c and 80c value for an overall postage of 1.50D on a rare local letter sent in June of 1956 from Cholon to Saigon.  Saigon machine arrival cancel on the reverse. 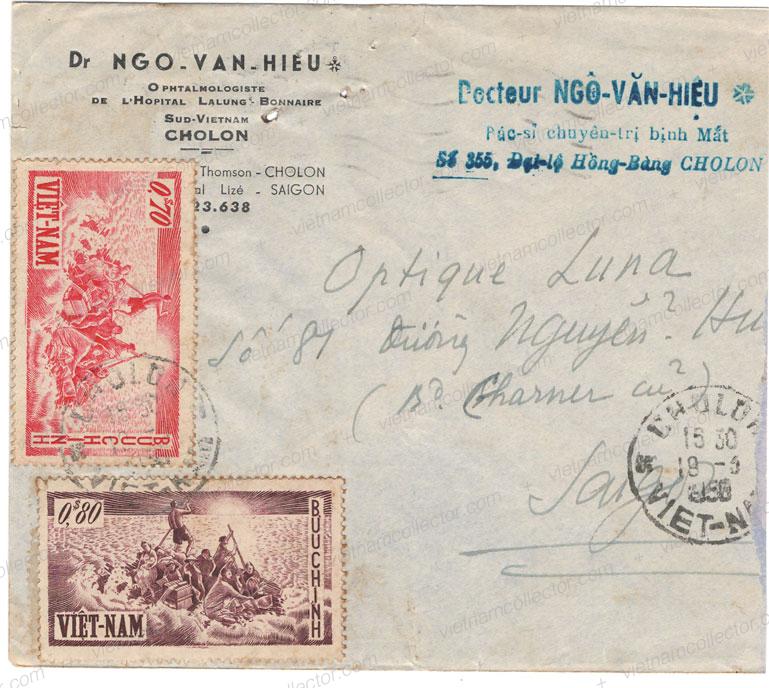 Mixed franking of the 70c and 80c value plus the 1.50D Geneva Agreement for an overall postage of 3D on an international letter sent from Saigon to Canada. 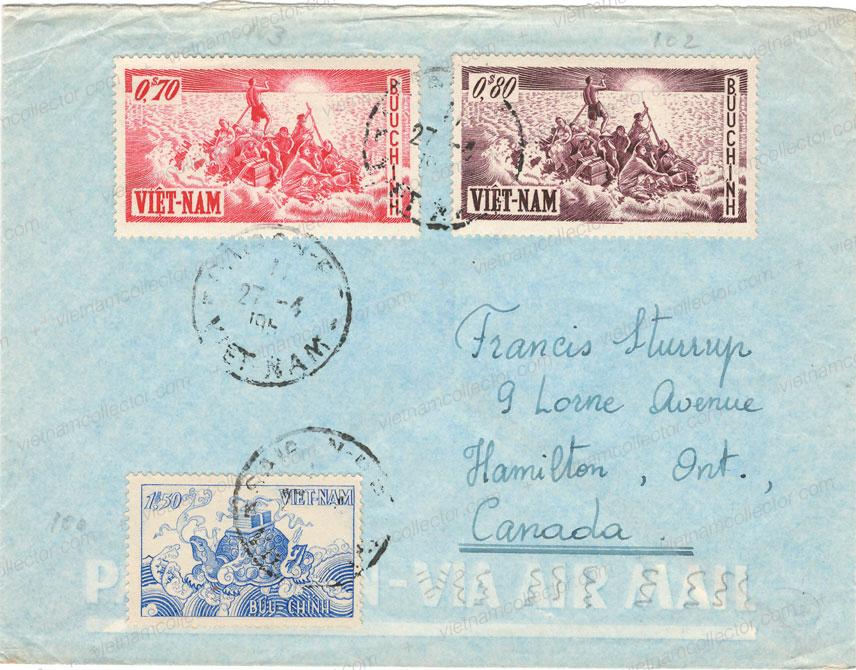 Mixed franking of the 0.70 and 0.80P Refugee stamps together with 0.60P UPU stamp paying an overall postage of 6P  on a registered domestic letter sent from Hue to Saigon in January of 1956. 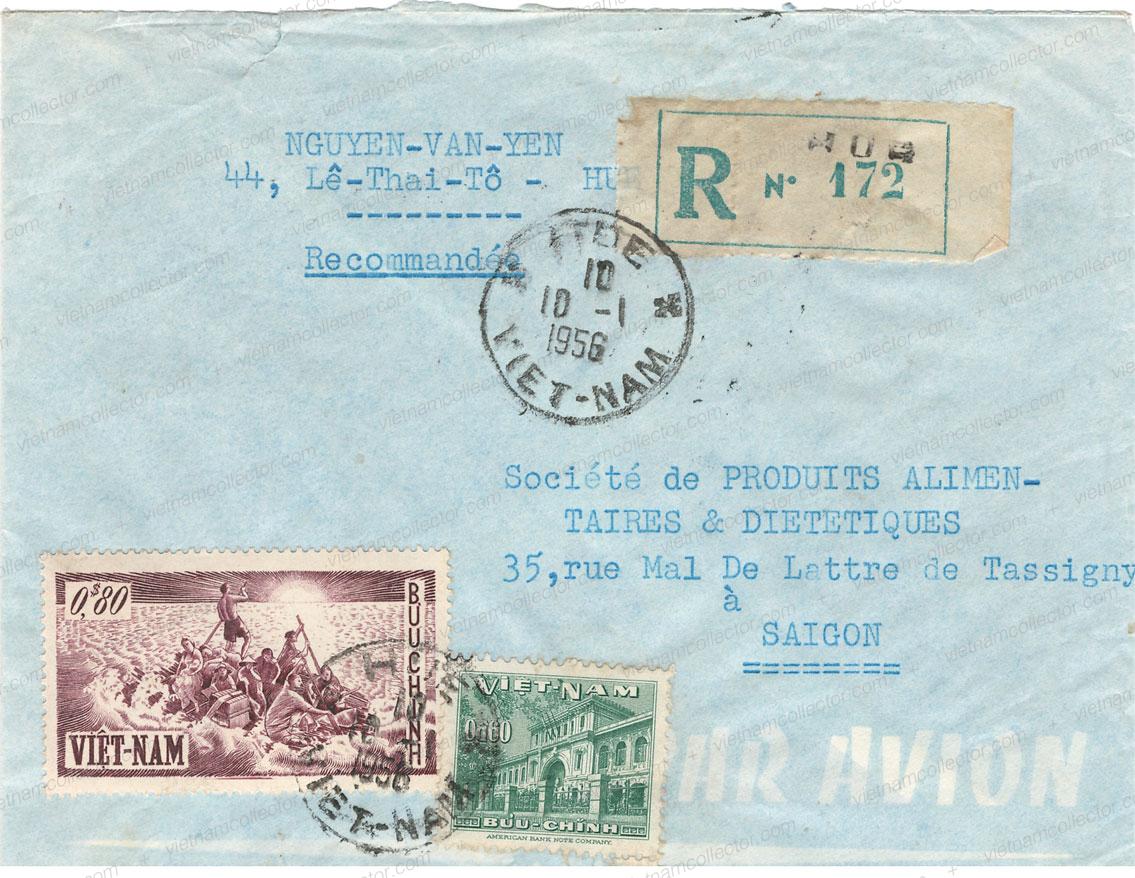 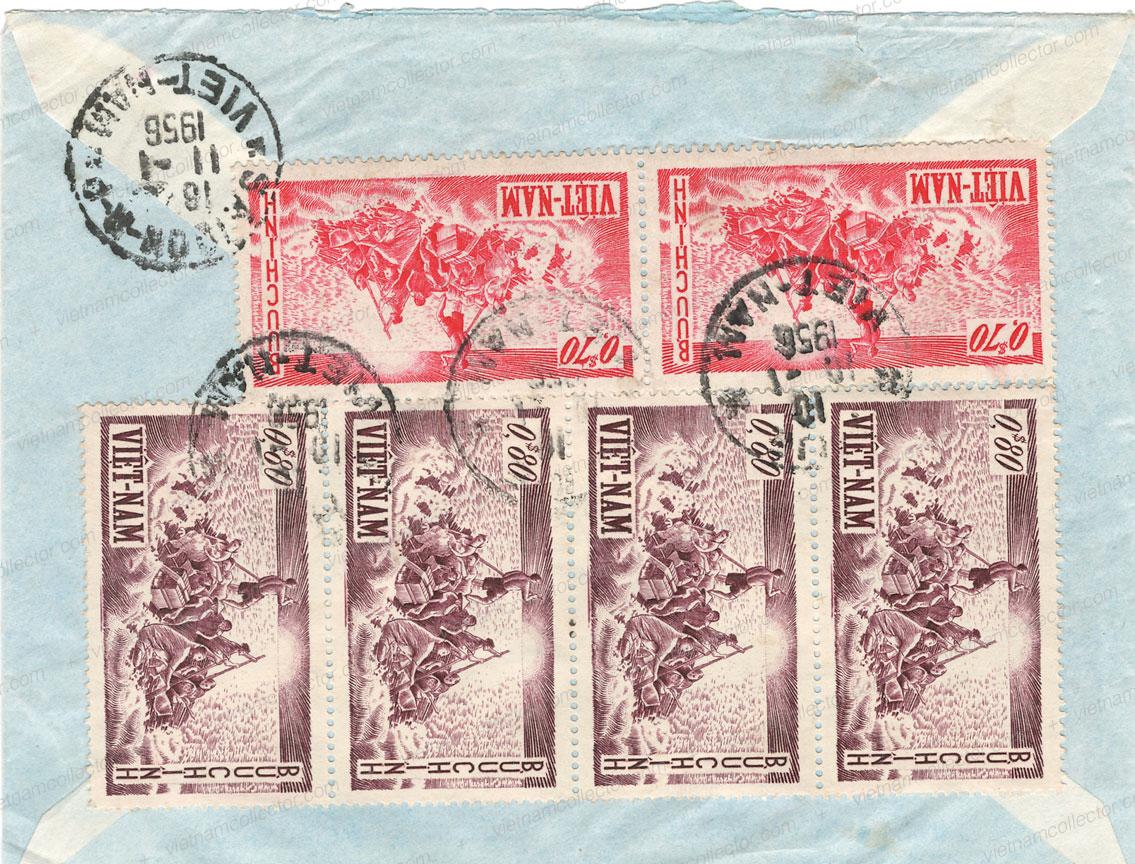 Rare single franking of the 10P value on an international air mail letter sent from a hospital to the United States in March of 1956. Washington D.C: machine arrival cancel on front. 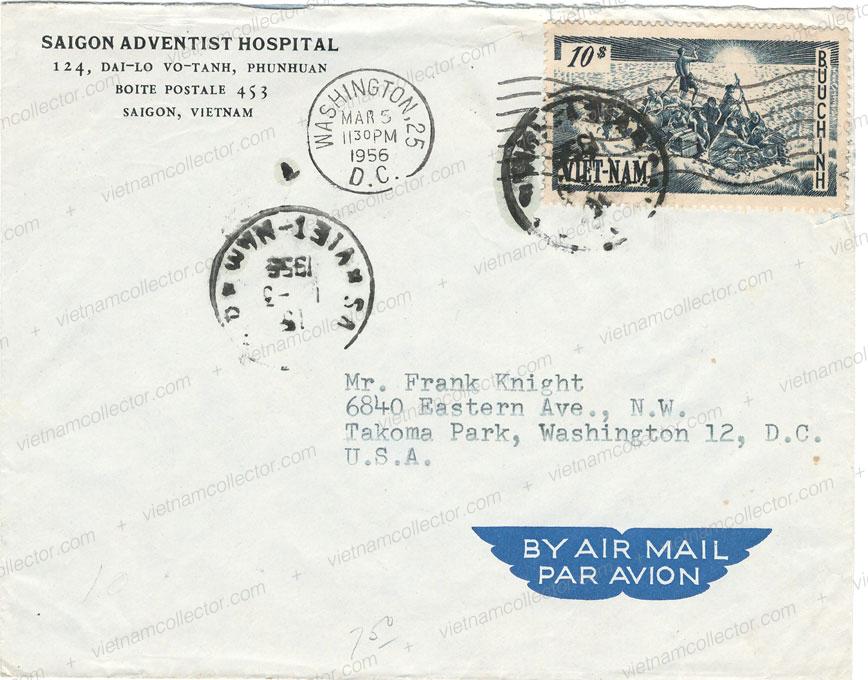 Very rare mass franking of the 10P (8) and 20P (5) stamps paying an overall postage of 180P on a large commercial air mail letter sent from Saigon to France in August of 1956. 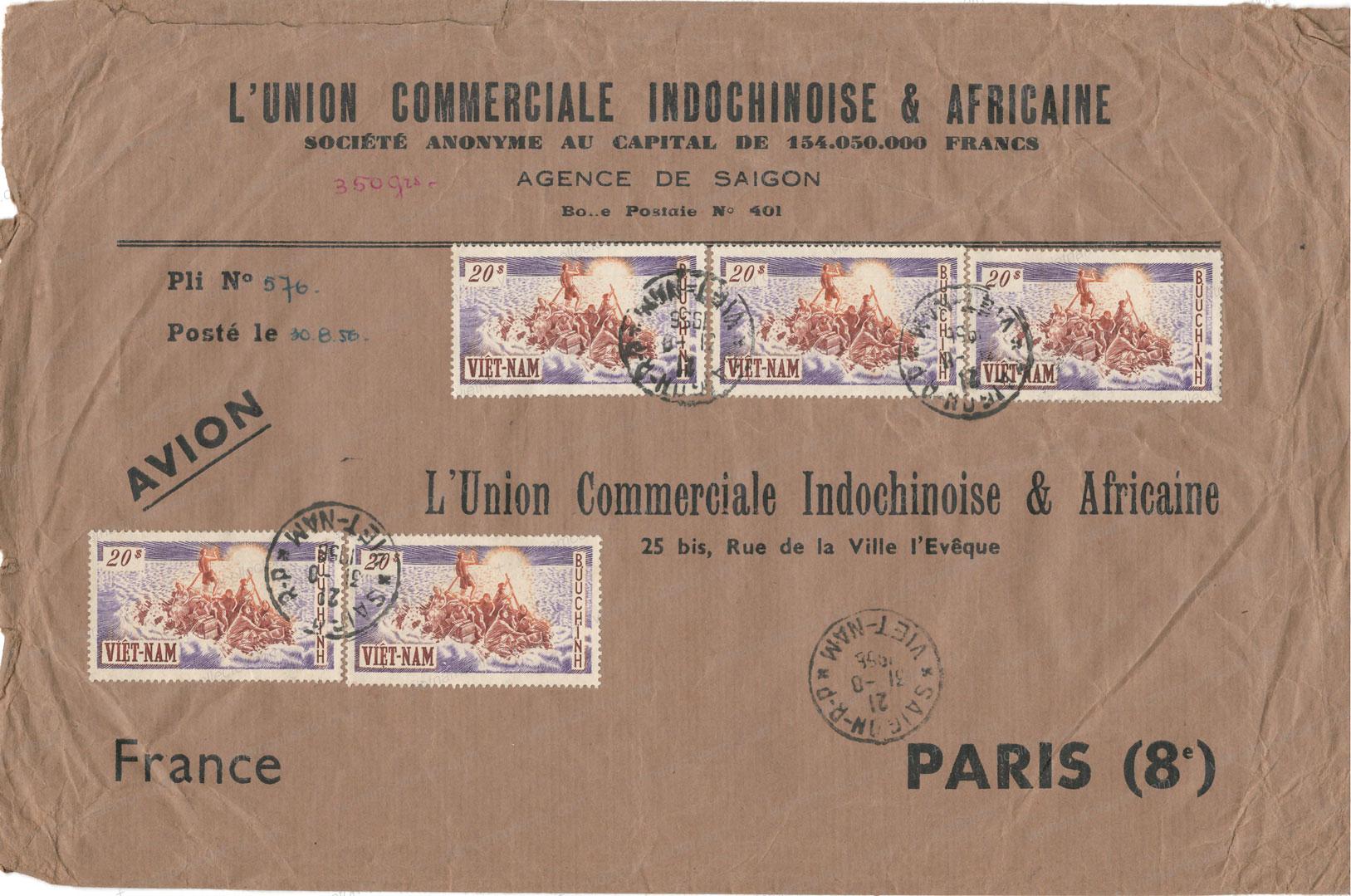 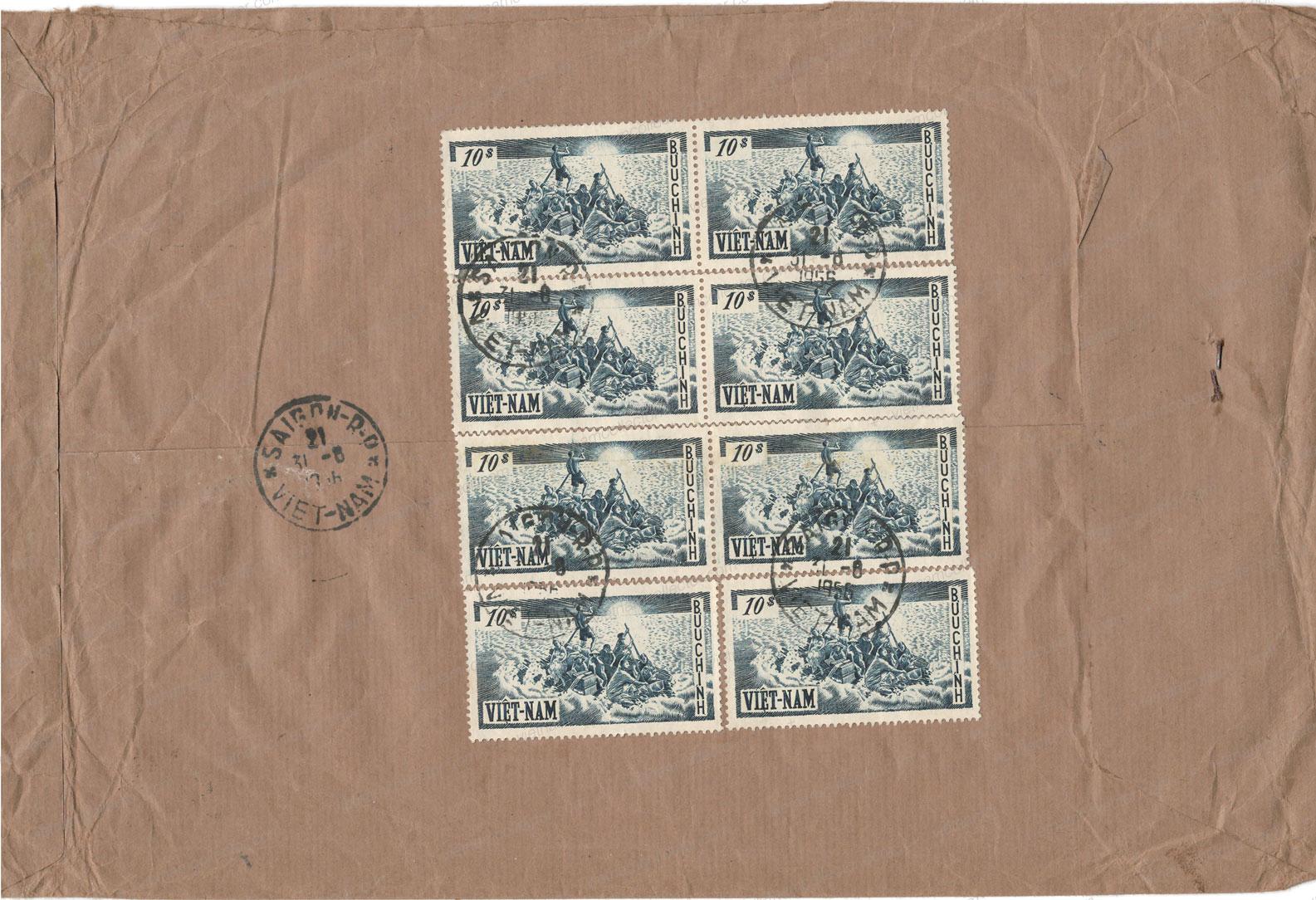 Rare single franking of the 35P value (overprinted) on a registered international air mail letter sent from Saigon to the United States in June, 1961. 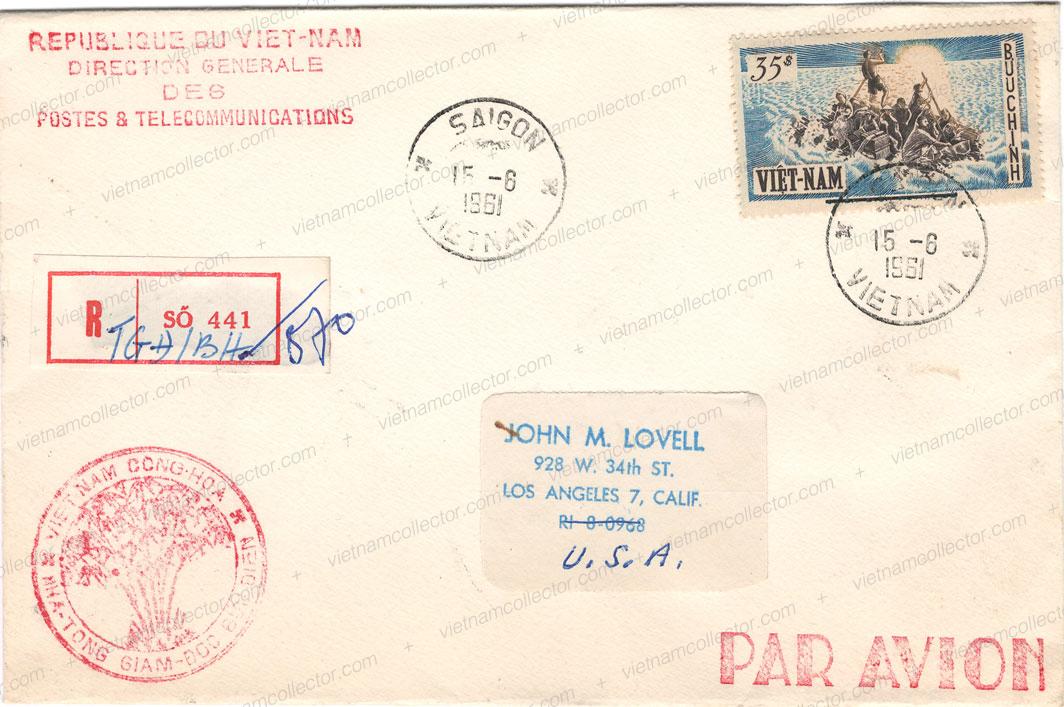 Mixed franking of the 35P Refugee stamp (overprinted) together with the 50c Defense of Country  stamp paying an overall postage of 35.5P on a registered international air mail letter sent fromSaigon to the United States. Boston arrival cancels on the reverse. 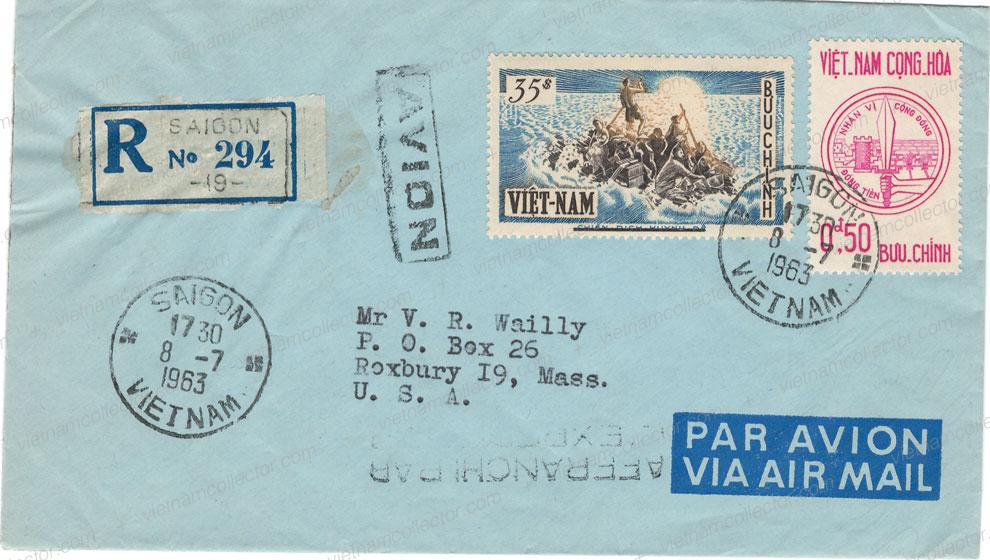 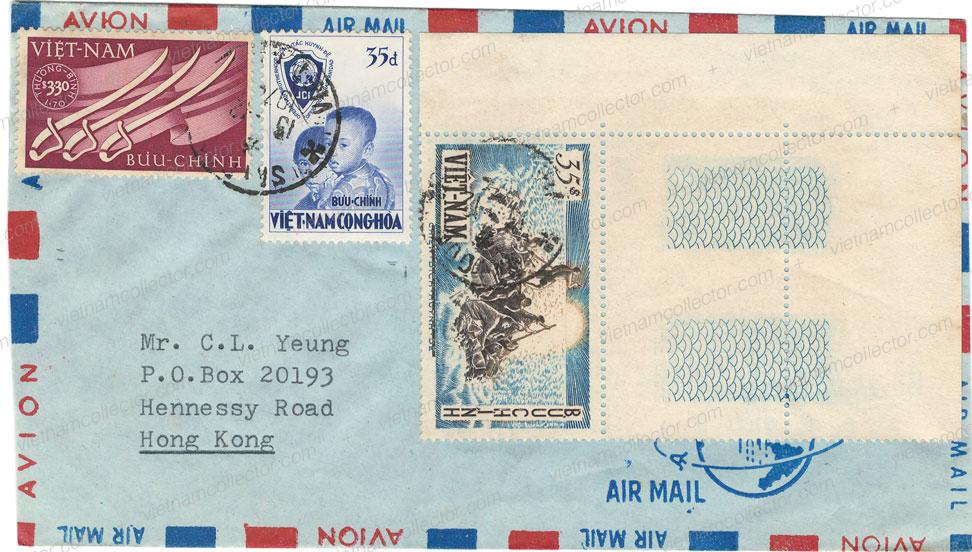 Mixed franking of the 35P Refugee stamp (overprinted) together with two 10P War Rural Mail stamps paying an overall postage of 55P on an international air mail letter sent by an American soldier to Hong Kong in December of 1972.

Mixed franking of the 35P Refugee stamps (2) together with the 8D Sport and Youth stamp paying an overall postage of 78P on a large commercial air mail envelope sent from Saigon to West Germany. 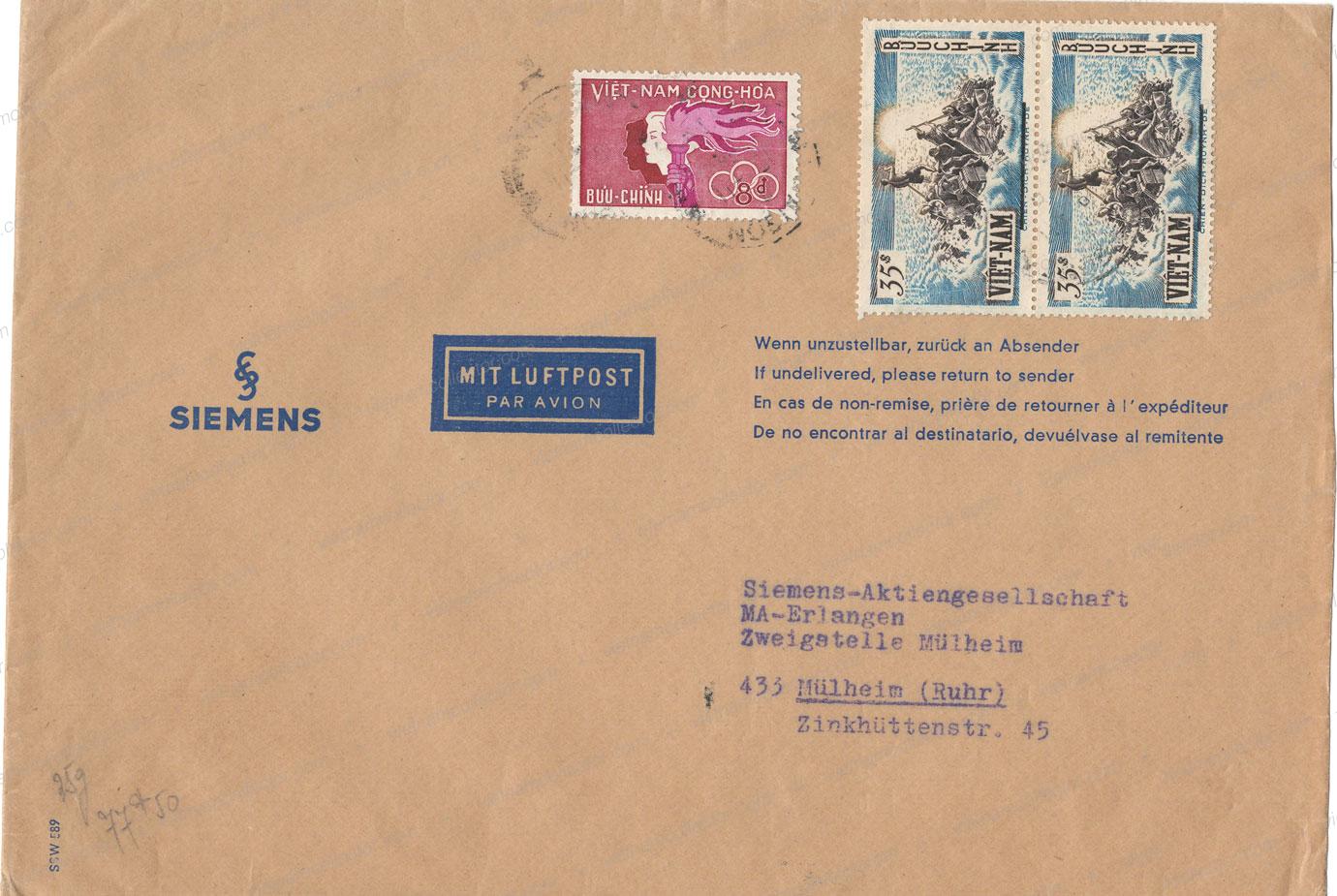 Mixed franking of the 35P Refugee stamp (2) together with stamps from the Air Mail and Sports sets paying an overall postage of 101D on a large commercial envelope sent from Saigon to West Germany in December of 1966. 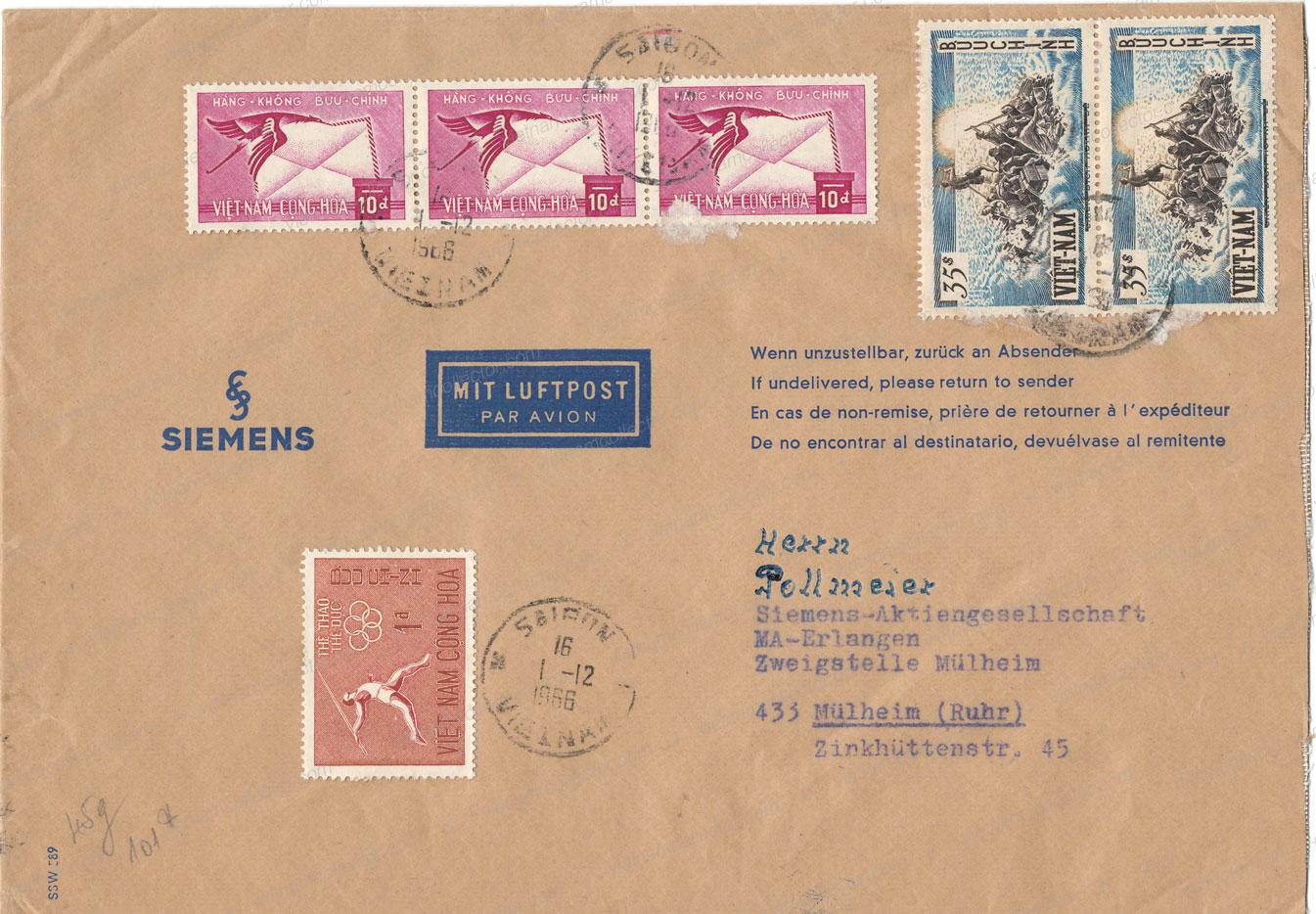 Rare multiple franking of the 35P overprinted Refugee stamp (4) paying an overall postage of 140P on a registered express mail letter sent in November of 1966 from Saigon Switzerland. Bern arrival cancel on the reverse.

Multiple franking of the 35P overprinted Refugee stamp (2) paying an overall postage of 70P on a large commercial air mail envelope sent from Saigon to West Germany in January of 1967. 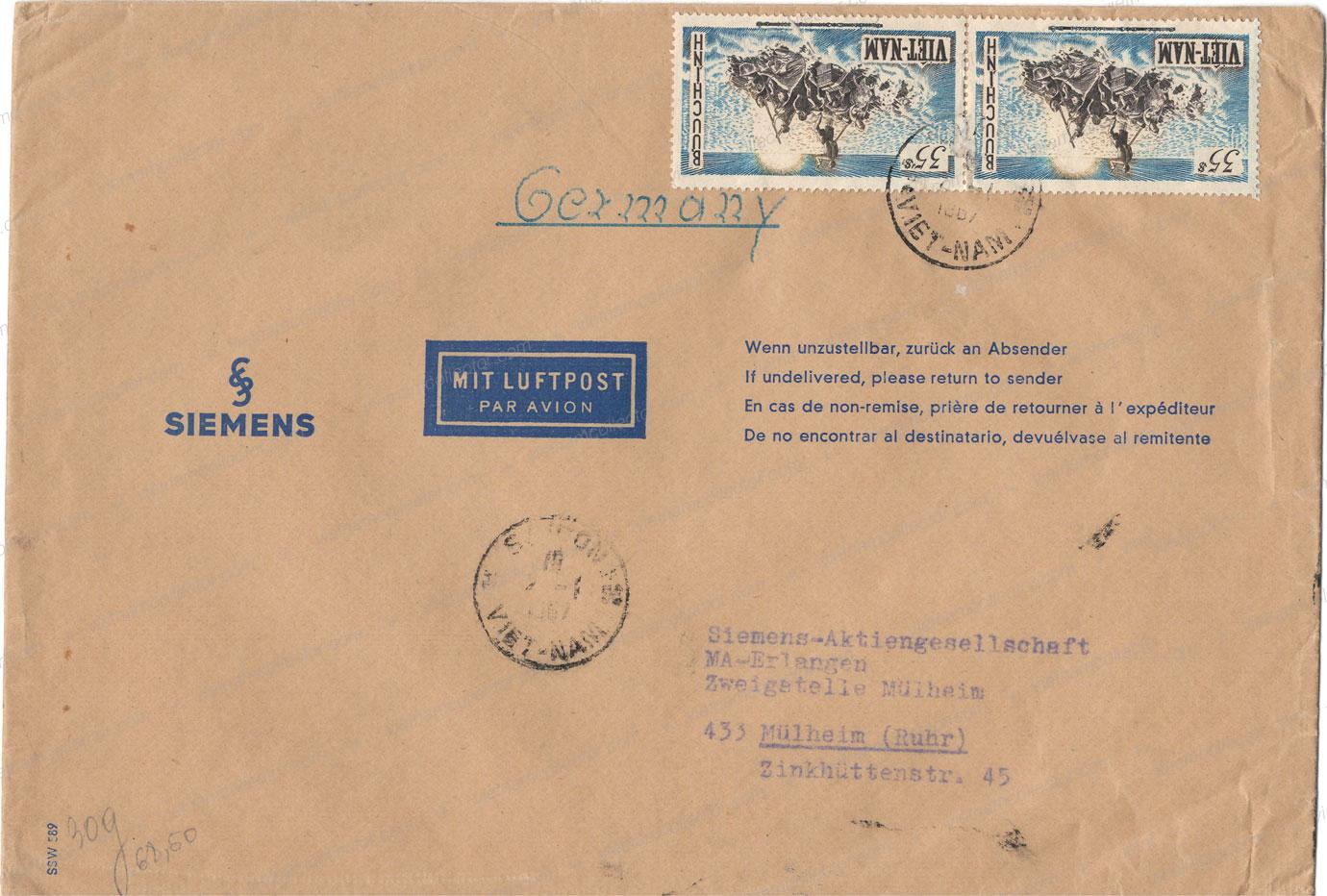 Very rare registered air mail letter featuring the entire Refuge set and mailed on the First Day Issuance from Saigon to the United States. New York arrival cancel on the reverse. The un-overprinted 35P and the 100P value on postally used cover are very rare. 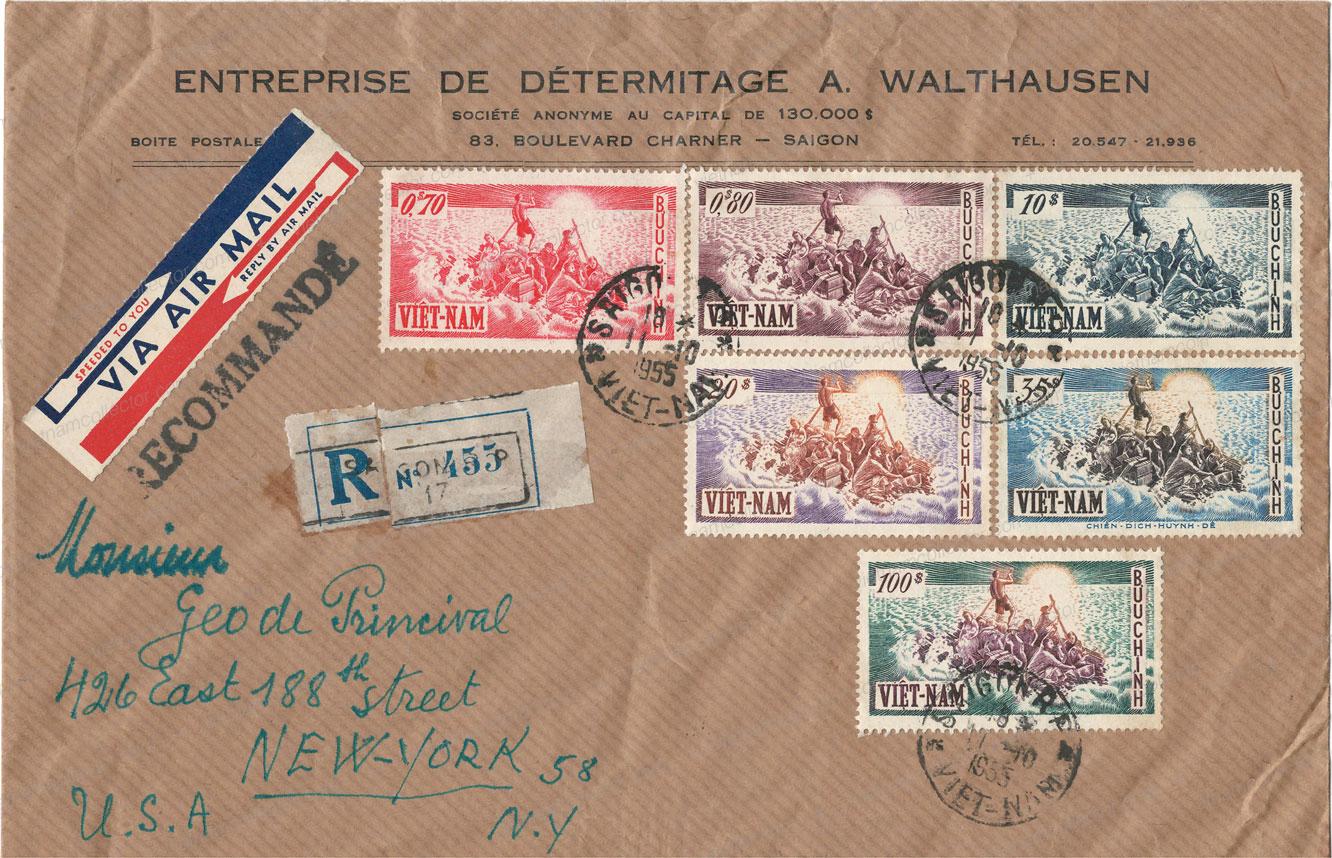 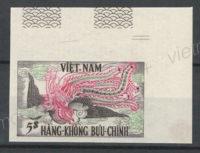 1.Anniversary of the Establishment of the Independence Palace in Saigon