North Vietnam, 1st Anniversary of Tran Dang Ninh’s Death, July 1st, 1956 (Michel Nr. 42-45); This set, honoring the recent death of a military commander, was clearly intended for the local population, especially ex military personnel, as the fairly low three nominals only had the purpose as add-on values to complete odd postage rates. Four stamps with nominals of 5D, 10D, 20D and 100D were produced at the Vietnam National Printing Works in Hanoi. The sheet size was an odd 196 stamps per sheet.

Since the lower values could only be used as completion values they did not find a lot of use. Postally cancelled stamps are therefore very rare. Below is the meager yield of 25 years of collection activity. The editor has yet to find an off-cover 5D value that was postally used. So, €13 (Michel) and $14 (Scott) for a postally used set are quite inadequate given the lack of supply.

Cancelled to order stamps were prepped and hence this is the most likely way you will find a used set. Keep in mind that cancelled to order sets are worth a lot less than postally used sets. Note that the 100D value shows the plate error short 1 in 1910.

Here is a portion of a complete sheet of the 5D value cancelled to order that is in the editors collection (all margins intact). For technical reasons only a part of the very large sheet (196 stamps) is shown. As you can neatly see the clerk always struck four stamps at the same time so that each stamp only got 25% of the standard Hanoi cancel. 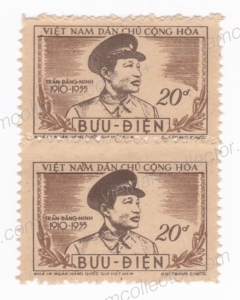 Other perforation errors do occur. Here is a pair of the 10D value imperforate in-between. The top stamp also has a small paper fold. 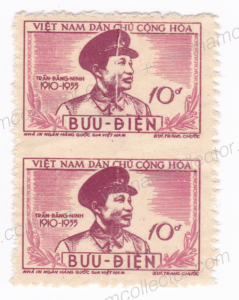 Complete letters with these stamps, are, as is typical for mail in the 1950’s, hard to find. That is especially true for the very low 5D value that offered barely any postal functionality. Here is an air mail letter to Czechoslovakia from August, 1957 that shows a multiple franking, two of which are the 5D nominal. The overall rate amounted to 1,020D. Given a base surface letter rate of 300D and 350D for each 5 grams if sent by airmail, as this letter was, it must have weighed between 5-10 grams. 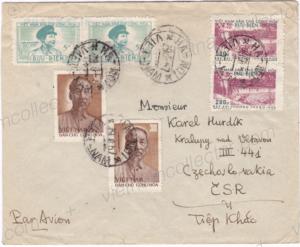 Mixed currency franking of three National Assembly stamp plus two 5D Tran Dang stamps that are hard to find on cover on a Xunhasaba bulletin mailing. The old 5D stamps had been devalued by 1,000:1 on March 1st, 1960 so they were only worth 1xu. The overall postage hence amounted to 37xu. 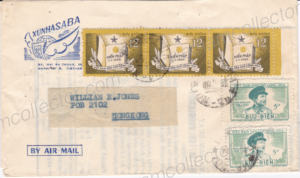 Mixed currency franking featuring a 10D Tran Dang Ninh that was devalued 1,000:1 on March 1st, 1959 and hence only worth 1xu in August of 1960. The overall franking amounted to 12xu (the standard letter rate to Eastern countries as of march 1st,1960). The letter was adressed to Czechoslovakia. 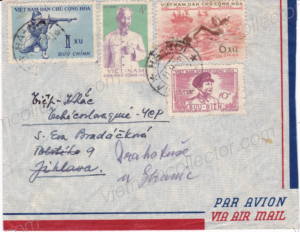 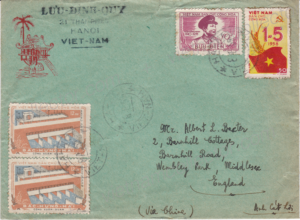 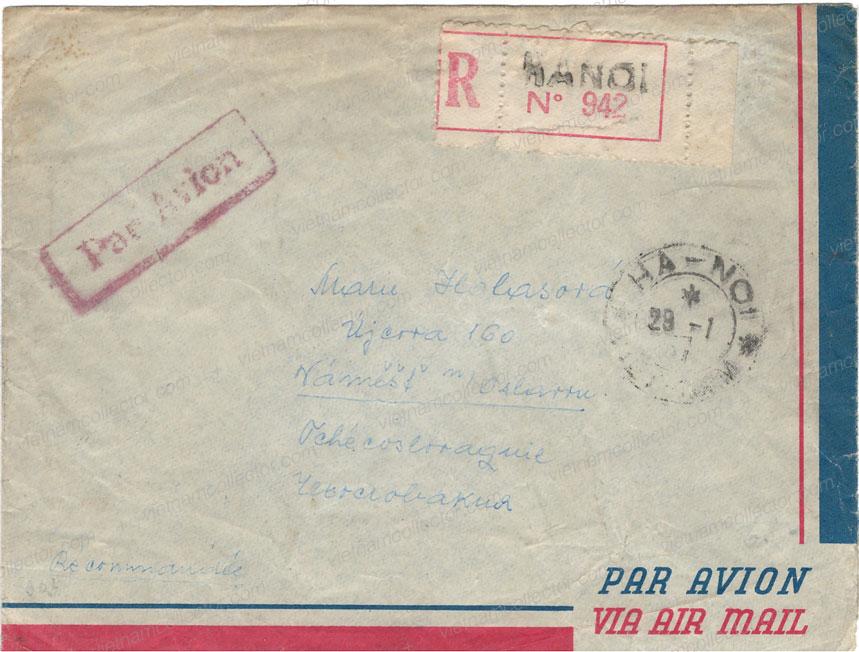 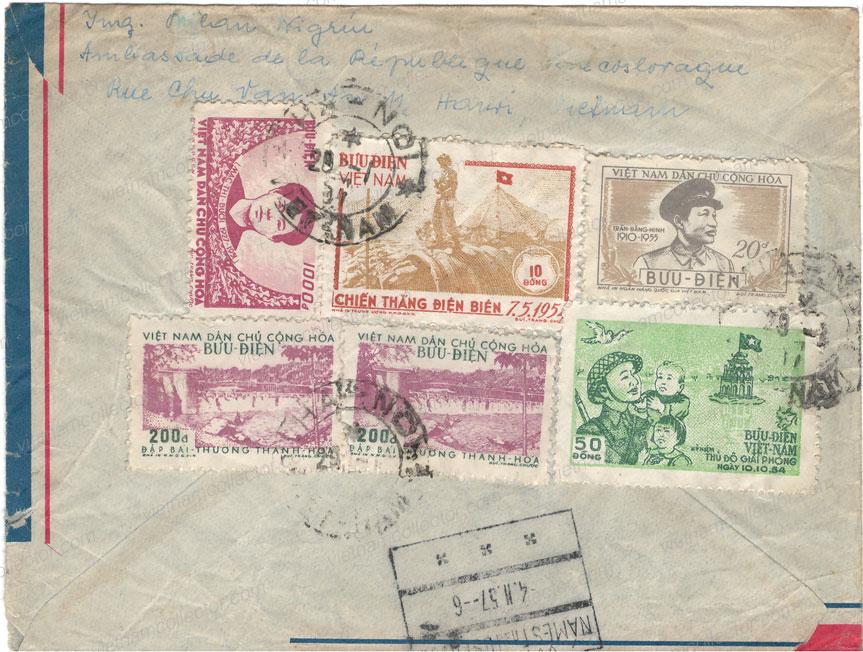 Here is an example sent in November, 1956 (just ahead of the higher tariff that come into force on March, 13th, 1957) to Czechoslovakia that carried a postage of 590 Dong using, among other early NVN stamps, two of the 20D values. 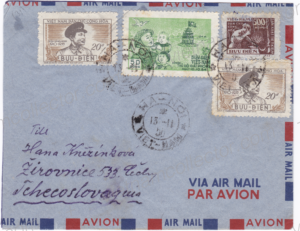 Mixed franking of the 500D Production and Thrift stamp together with the 100D HCM, 20D (2) Tran Dang Ninh and 10D Dien Bien Phu stamp paying an overall postage of 650D on an international air mail letter sent from Hanoi to Czechoslovakia in January of 1958. 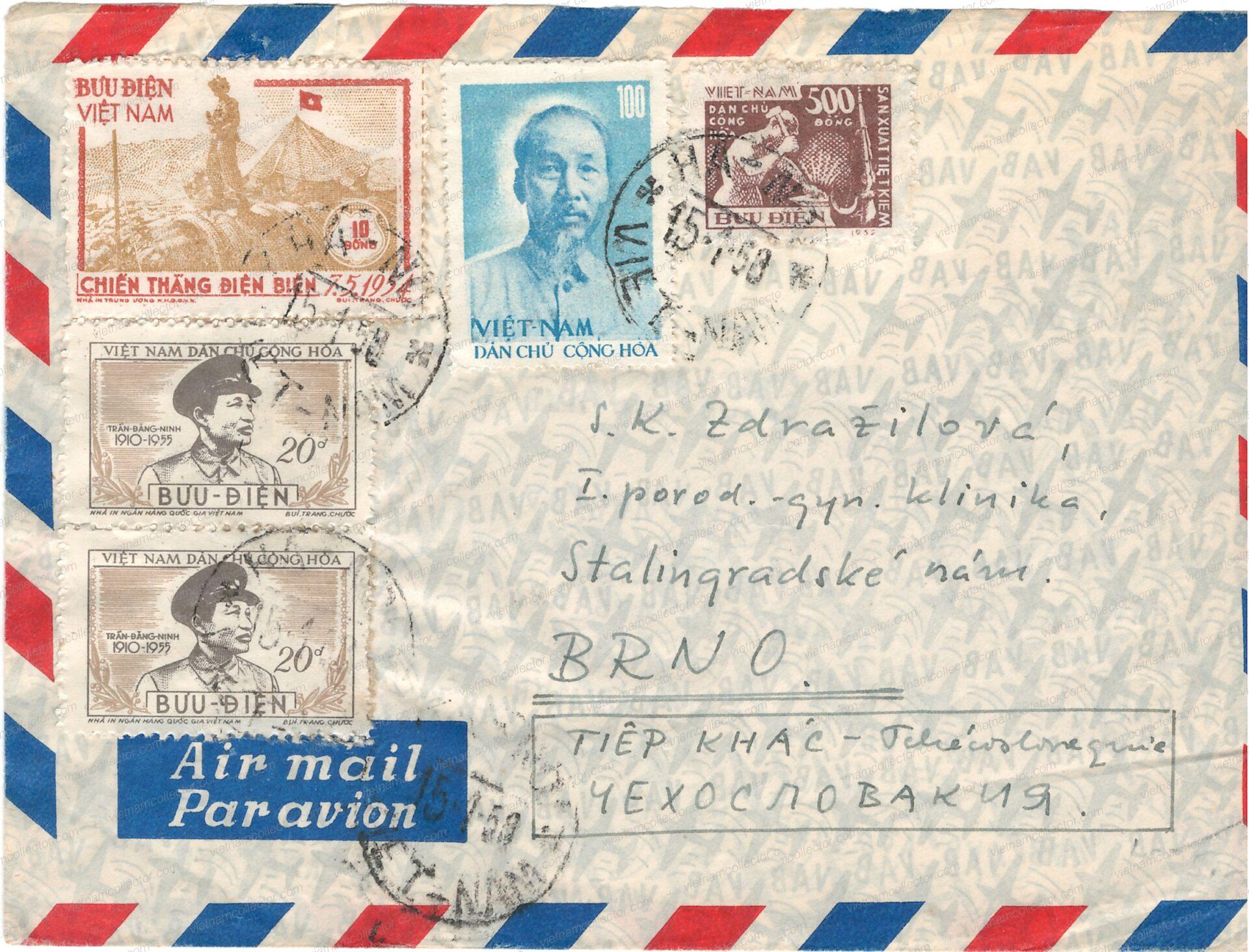 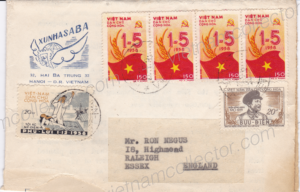 Mixed franking of the 150D Jade Tempel stamp with other early NVN stamps (including the 20D Tran Dang stamp) for an overall postage of 770D mailed in December of 1958. 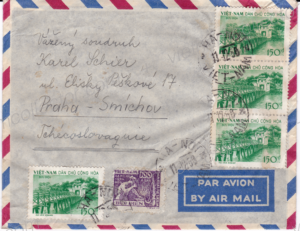 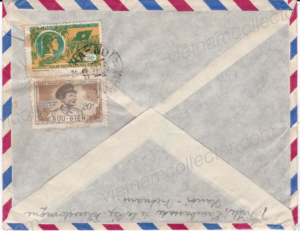 Local letters of the 1950’s are extremely rare (ex Schwirtz). This has to do with the punishing humid climate that destroyed paper in a few years and the fact that raw material, such as paper, was very scarce then. So most envelopes were re-used or recycled. This letter only survived as Gregor Schwirtz the well known East German linguist and philatelist collected it at the time. Here is a single franking of the 100D stamp used on an adversity cover (made up from used notepad-paper-writing inside) from Hai-Phong that covered the standard letter rate in force in October, 1956. 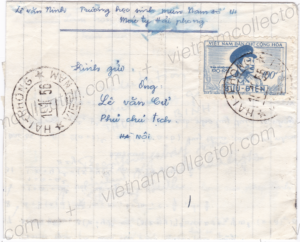 Another single franking of the 100D value on a domestic letter sent on December 24th, 1956 within Hanoi. The letter still contains a Christmas Card. Note that the stamp shows the plate error “white line in hat of Trăn Đăng Ninh”. Plate errors on postally used letters are very rare. 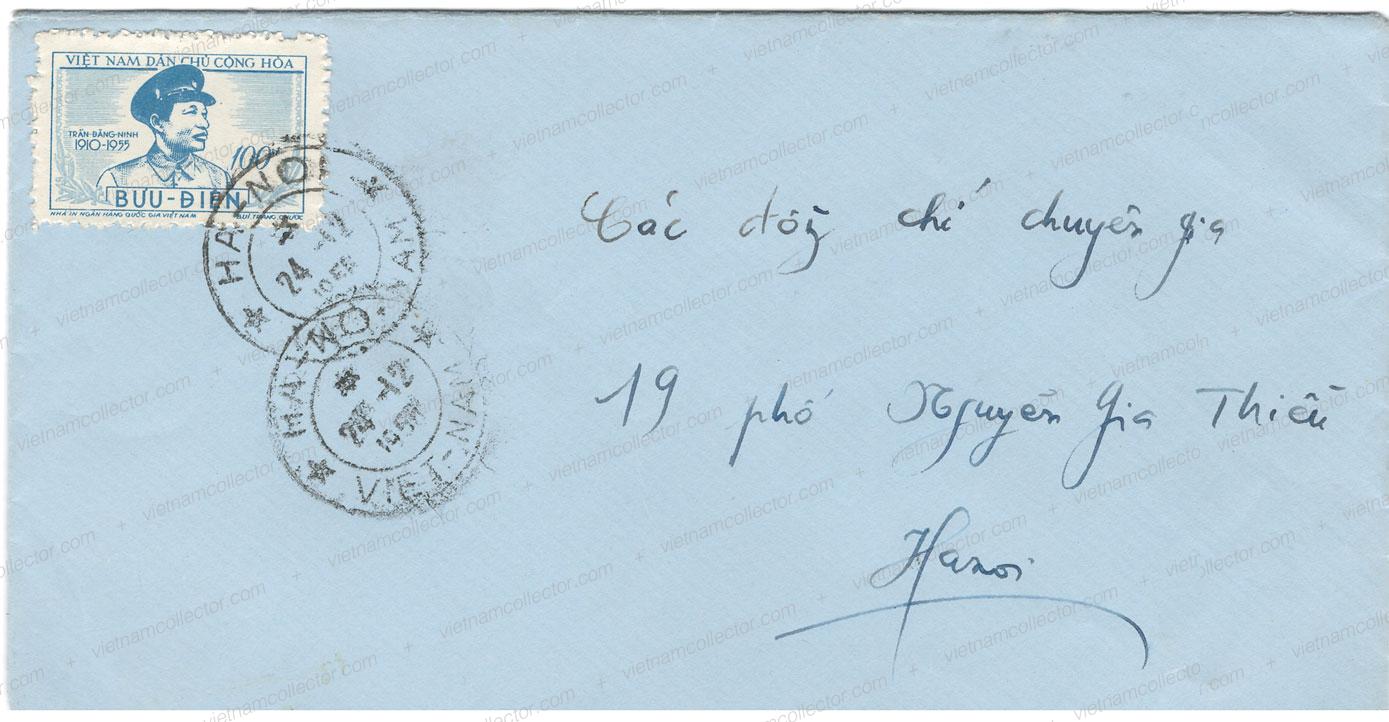 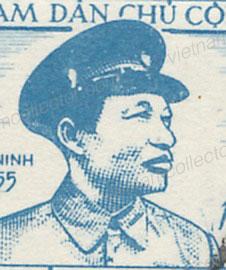 Another local letter, this time from August, 1956, mailed in Hanoi showing the third weight level rate of 300 Dong made up of a strip of three 100D stamps. Very rare multiple franking of this stamp. 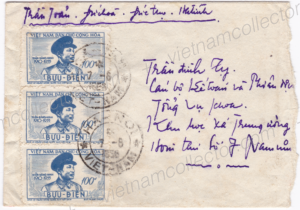 Air mail letter sent from Hanoi in April of 1957 to China bearing a block of four of the perforated Dien Bien Phu 50D stamp (orange-yellow) plus a pair of the 100D Tran Dang Ninh stamps for an overall postage of 400D. The basic surface letter rate amounted to 300D plus 100D would be charged for every 5g of weight if mailed by air. This letter hence must have weighed under 5g. 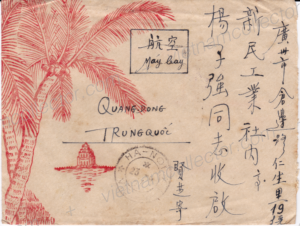 Rare multiple franking of the 100D value in a block of four paying the air mail letter rate to China (300D + 100D for every 5g of weight). Round and square Chinese censor hand stamps on front and reverse. Note that the bottom two stamps show the plate error short first 5 in 1955. Mixed franking of the 100D value along with a 500D railroad stamp, above the 470D air mail letter rate to East Germany from an employee at the East German Embassy to East Germany. So, the letter must have been heavier than 5 grams. 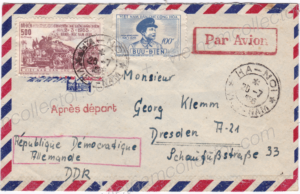 Very late usage of the 100D value (March, 1965) to West Germany together with a 1,000D value of the Handicraft Fair in Hanoi stamp for a total of 1,100 old Dong or 1.1. new Dong. The letters was most likely heavier than the standard 20g as Xunhasaba usually sent stamps in them. Due to very high inflation the Government performed another devaluation of the currency on March 1, 1959. 1,000 old Dong equaled 1 new Dong. Xunhasaba was, among other things,  the Government monopoly for selling philatelic products to dealers and collectors. Another Xunhasaba letter. This time a very interesting combination of the old Dong currency and the new Dong currency. Old stamps remained valid without any limitations. Again the franking was 1.1 new Dong or 110 Xu and it also went to West Germany.