Unified Vietnam, Orchids,  July 1977, Michel Nr. A917-918; Two stamps with nominals of 6 xu and 12 xu were issued in perforation 11.0. These stamps look very similar to Michel Nr. 841-842 but this time they do carry the country name “Vietnam”. According to Klewitz’ notes the 6 xu stamp was only issued on August 25th, 1980, which explains why the Michel catalogue had to insert an “A” into the catalogue number. 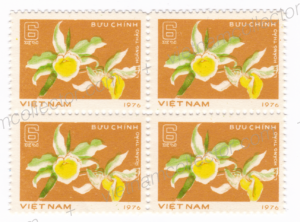 There are perforation errors known on the 12 xu value. Below are two of them. The first shows an im-perforated selvage at the bottom and the second im-perfroated selvage on the right. 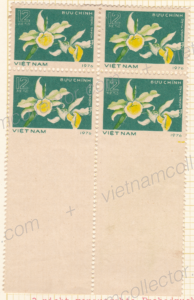 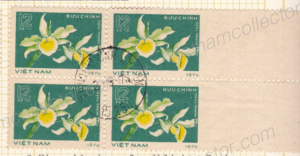 There are a very small number of im-perforated trial proofs (ex Klewitz) that show a nominal of 5 xu and 10 xu. It is not clear why postal authorities would select these nominals for the trial run as both values had little application. Note the different color of the 12 xu value from the issued stamp. 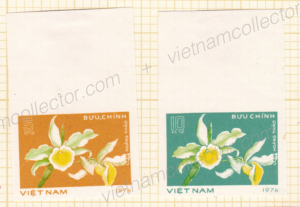 Rare local letter featuring a single franking of the 12xu stamp sent from Ho Chi Minh City to Hanoi in August of 1978. Fragment of Hanoi arrival cancel the reverse. 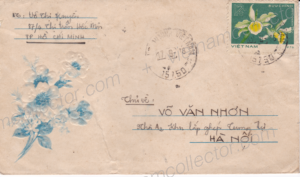 Local letter sent from Ho Chi Minh City to Dalat in September of 1979 with a single franking of the 12 xu stamp covering the standard domestic letter rate. Dalat arrival cancel on the reverse. 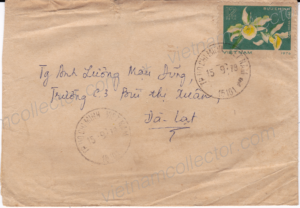 Another, rare local letter featuring a single franking of the 12x stamp sent from Vinh Long to Ho Chi Minh City in August of 1978. 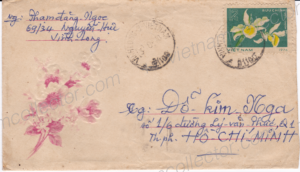 Single franking of the 12 xu orchid value on a domestic letter sent by a member of the military (note the Hom Thu Nr. in the sender line) from Hanoi to Saigon in April of 1978. 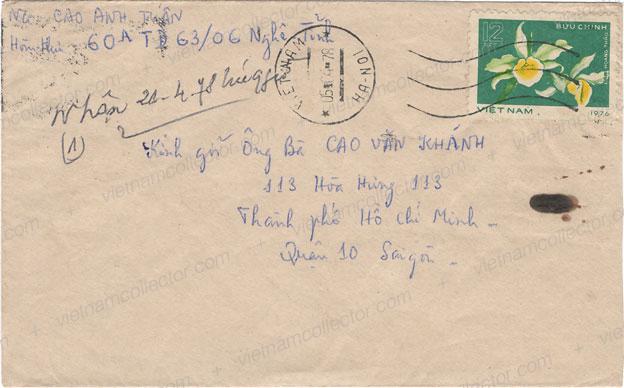 Mixed franking using two of the orchid stamps (The 12xu value with the country name “Vietnam”) paying an overall postage of 2.60D on a letter sent from Ho Chi Minh City to Paris, France in 1977. 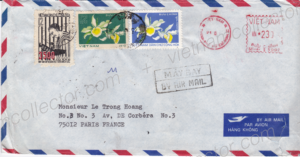 Rare registered express mail letter sent to Klewitz in July of 1978. The letter carries nine of the 12 xu orchid stamps plus the orchid set issued in 1976. The overall postage amounted to 6.10 Dong. Fulda arrival cancel on the reverse. Green Fulda customs cachet on front. 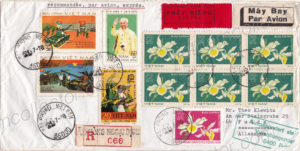 Another very rare registered letter mailed in August of 1977 from Hanoi to Essen, West Germany featuring the entire im-perforated Tropical Fruit set plus a range of other NVN stamps (including two of the green 12 xu Orchid stamps) from the mid 1970’s for an overall postage of 3.80D. Im-perforated stamps on postally used cover are very rare. 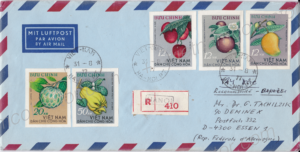 Rare registered express mail letter sent to Klewitz in August of 1978. It features one of the 12 xu stamps plus other NVN stamps for an overall postage of 4.10 Dong. Fulda arrival cancel on the reverse. Green Fulda custom cachet on the front. Air mail letter sent in April of 1978 from Ho Chi Minh City to Paris, France. It carries two of the 12 xu orchid stamps. The overall postage amounted to 3.44 Dong. Rare registered express mail letter sent to Klewitz in August of 1978. It carries a number of the orchid stamps plus a range of other contemporary NVN stamps for an overall postage of 4.40 Dong. Interesting Basel-Frankfurt rail transit cancel and Fulda arrival cancel on the reverse. Green Fulda custom cachet on front. 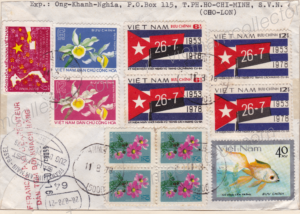 Another late usage of the souvenir sheet on a mixed franking registered air mail letter sent from Hanoi to West Germany in February of 1978. Together with the other range of NVN stamps (including two of the Orchid stamps) the overall postage amounted to 4.40D. Registered air mail letter sent as a mixed currency franking in November of 1995 from Ho Chi Minh City to Klewitz. The letter carries the 1995 Observances set plus stamps from the Alpine Roses and the 1977 Orchid set. The Orchid set was still denominated in old Dong. The Vietnamese Government conducted a devaluation of the Dong on September 14th, 1985. This meant that all stamps issued prior to this date were only worth one tenth at the time of mailing. The overall postage hence amounted to  0.18 oD = 0.02 nD. plus the stamps in new Dong (19,600 nD)  for 19,600.02nD.