North Vietnam, Mother and Child, June 1st, 1961, Michel Nr. 164-165; While this issue is officially called “Mother and Child” it most likely is another issue to commemorate the Red Cross as a red cross is prominently displayed in the center of the stamps. “Red Cross” is a much collected theme by thematic philatelists and hence is a popular topic by postal authorities around the world to earn hard currencies. Two stamps were issued. One with  nominal of 4 xu (extension value) and one with 12 xu (standard domestic letter rate). The stamps were perforated 11:0. Here is the official Xunhasaba stamp bulletin that was released upon issuance of the set. 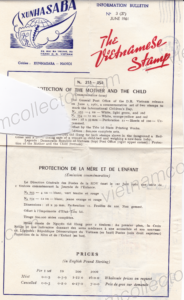 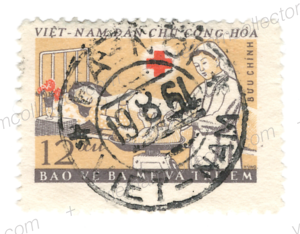 These stamps were not officially issued imperforate, however a small number of imperforate trial proofs have come to market. Rare!

Color errors do occur but are much rarer than the catalogue value in Michel would suggest. This 4 xu stamp that is missing all of the red print very rarely comes up for sale at auctions and is always readily snapped up by collectors but Michel values it only at €30. 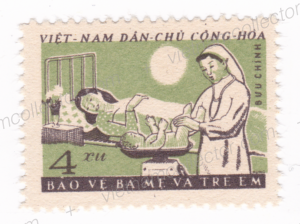 Here is a letter featuring the set that was mailed June 6, 1961 to Klewitz in West Germany. The overall postage is only 16 xu which would have been insufficient as the standard international letter rate to Europe was 20 xu, however, it was transported without incident and penalty. This was most likely because the sender wrote “Germany RDA” which stood for East Germany. The standard letter rate to fellow socialist countries like East Germany was only 12 xu so in the eyes of the postal clerk the postage of 16 xu was actually excessive. 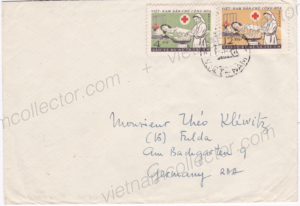 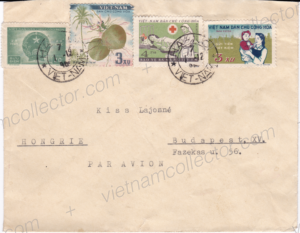 Registered letter mailed on October 20th, 1966 to Klewitz featuring one of the stamps. The overall postage amounted to 1.13 Dong which was a tad above the required tariff of 1.10 Dong for a standard letter to West Germany. 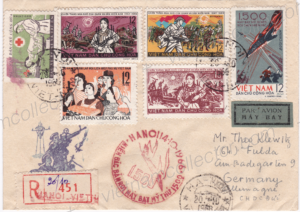 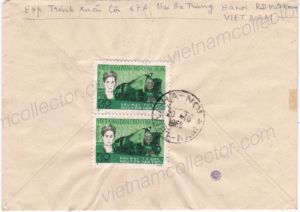 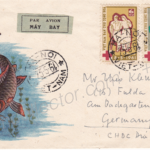 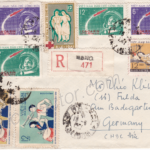