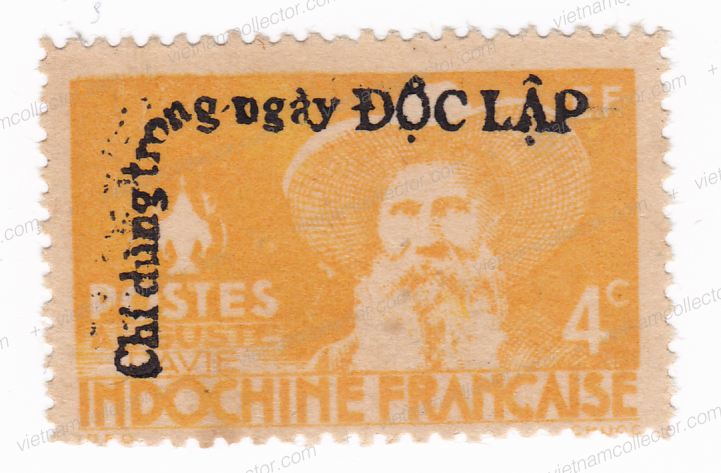 Sometimes stamps are offered in auctions that purport to have been prepared for the September 2nd, 1945 Independence Day. The stamps started to appear in the mid 1980’s and were accompanied by a newspaper article in Vietnamese that was supposed to be published on September 1st, 1945. 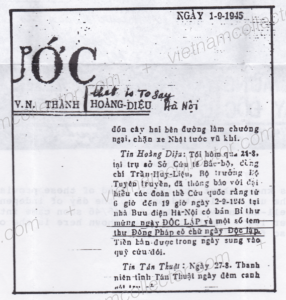 The article’s translation offered was:

“Comrade Tran Huy Lien, gave the news to the representatives of the organization of the national rescue in the building of the relief organization for Tonking, that on September 2nd, during the time from 6 to 19 O’clock in the Head Post Office Hanoi greeting-covers for the Day of Independence and some stamps of French Indochina with the inscription for the day of Independence were sold. The cashed money on this day is for hunger relief.” ( all SIC)

The article turned out to be a clever ruse by a Hanoi forger with inside knowledge of the Viet Minh postal administration. Forged announcements supposedly issue by the Viet Minh postal administration often accompanied new fakes to provide them with credibility. During the same time the forger produced fake and fantasy Ho Chi Minh stamps from South Central Vietnam as well as many others fantasy products. Below is  a group of five stamps that show the overprint:

Translated it reads: “Greetings to the independence day”.  The stamps also are offered on sale colorful covers with fake cancels showing the Vietnamese flag. Reportedly 29 different Indochinese values were overprinted in either black or red in this way. Here is a more detailed view of the overprint: 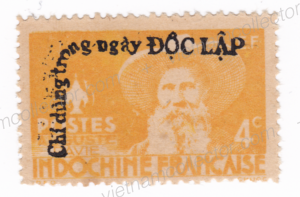 Unfortunately the ruse was initially effective as the Society of Indochinese Philatelists (SICP) reported the discovery of these overprinted values in their May/June 1987 Journal. The article did not opine if the stamps were genuine or fakes it simply reported their appearance in the market place. Unfortunately the article was then used by the forger to extensively market the fakes to Asian and U.S. auction houses who unwittingly sold the fakes often for hundreds of Dollars. Also, the Michel catalogue was duped into showing the overprints but cautioned that they were “under study” and that more research was needed. Again, this action assisted the forger. In the meantime both, the SICP and Michel have made clear that these stamps are pure fantasy products that were simply made to defraud collectors.

The old adage “Buyer beware” rings very much true in this case. 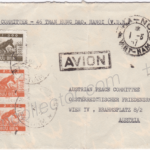 Production and Thrift/Worker and Anvil Issue 1953/1955 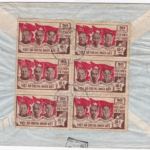 Month of Friendship between Vietnam, the Soviet Union and China