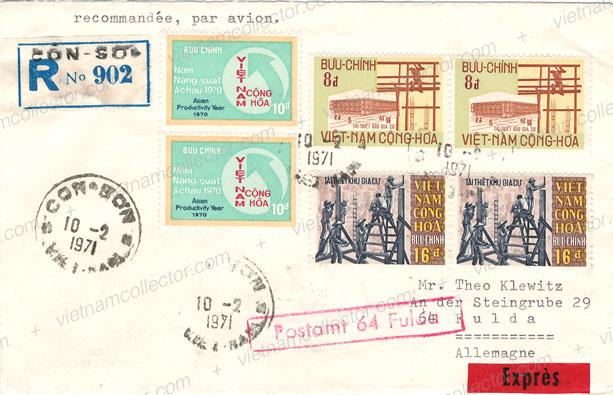 This stamp was not officially released imperforate however, a small number of imperforate trial proofs have come to market. Here is an imperforate strip of four stamps on un-gummed paper.

Mixed franking of the Reconstruction after the Destruction of the TET Offensive set plus a pair of Asian Productivity Year stamp paying an overall postage of 68D on a rare international registered express air mail letter sent from Con Son to West Germany in February of 1971. Saigon machine transit and Frankfurt arrival cancel on the reverse.

Mixed franking of the 10D Labor Organization stamp together with the 3D Mobile Post Office stamp paying an overall postage of 13D on an international air mail letter sent from Saigon to England in December of 1970.

Mixed franking of the 10D Aviation stamps (4) together with the Asian Productivity stamp paying an overall postage of 50D on an international air mail letter sent by a member of the U.S. Consulate in Hong Kong using a San Francisco military sending address to Hong Kong and mailed in May of 1972.