Indochina/South East Asia, 1946-1947, War Grave Registration Unit in South East Asia; The history of the U.S. Army  War Grave Registration unit goes back to the civil war and continues until today. The responsibility of the unit was to locate deceased soldiers in the battle field and to reunite the remains with their loved ones at home. Men in the unit were responsible to clearly identify deceased soldiers and to provide routine burial services that are usually taken over by a private mortuary. As one can imagine this task was not espoused to by any soldier and so men were either ordered into the Grave Registration Unit or lured by promotions and higher pay. Also men in the unit were generally avoided by other soldiers due to the soldiers superstitions much like people in the Middle Ages that avoided the executioner and made him live outside of walled cities.

After Word War II the work of the Ware Grave Registration Unit was basically performed outside the United States as that is where all the combat action took place. Men of the unit were sent to international battle fields around the world, wherever American Servicemen had seen any action.

The following covers document the work that Lieutenant Irving Robert Wendt performed in South East Asia in 1946 and 1947. Lieutenant Wendt (later promoted to Colonel) was born in Toledo, Ohio in 1922, so was around 24 year of age when his tour in South East Asia began. As per his obituary on findagrave.com “He served his country as an Army officer in World War II, The Korean conflict, Vietnam and the the Cold War… As a career Army officer, he served his country in the China-Burma-India theater, Korea, Vietnam and Germany… He was shot twice in Vietnam ans stopped a revolution there.”

The involvement of the U.S. military in South East Asia was mainly focused on Japan and its islands in the Pacific and the Philippines but the Americans also intervened in theaters of war that were generally dominated by the French or the British as they simply had the better logistical support and hence greater reach. After the Japanese occupation of Indochina in 1942 the Office of Strategic Services (O.S.S.) which was the precursor organization to the C.I.A., began to create an informal network in Indochina to identify bombing targets there. The bombing raids were initially conducted from Southern China and later in the war from India which was a British colony at the time (Wikipedia). The raids were focused on industrial facilities, ports and railroads and general infrastructure that aided the Japanese war effort. Some of the aircraft were shot down by the Japanese resulting in pilots and  crew men that became “missing in action” (MIA). Sergeant Wendt’s task was to locate the bodies of these service men and return their remains to their loved ones.

Wendt was drafted into the U.S. Army in 1943 and one of his first assignments after basic training apparently was in India with the War Grave Registration Unit. The first two exhibits are letters from April and August, 1946 that were directed to Wendt. The first was directed to the United States Forces General Depot in New Delhi and the second simply to the U.S. Army Grave registration Unit in Calcutta. Clearly Wendt was traveling around India in order to pick up trace information that may have allowed him to locate perished American service members. The letters may have included information on certain individuals Wendt was trying to locate.

Letter sent from Paval, India on April 10th, 1946 to Wendt in Dehli. New Delhi arrival cancel on the reverse. Letter sent from Agral, India in August of,1946 to Wendt in Calcutta. Calcutta arrival and advertisement cancel (Buy National Savings Certificates) on the reverse. 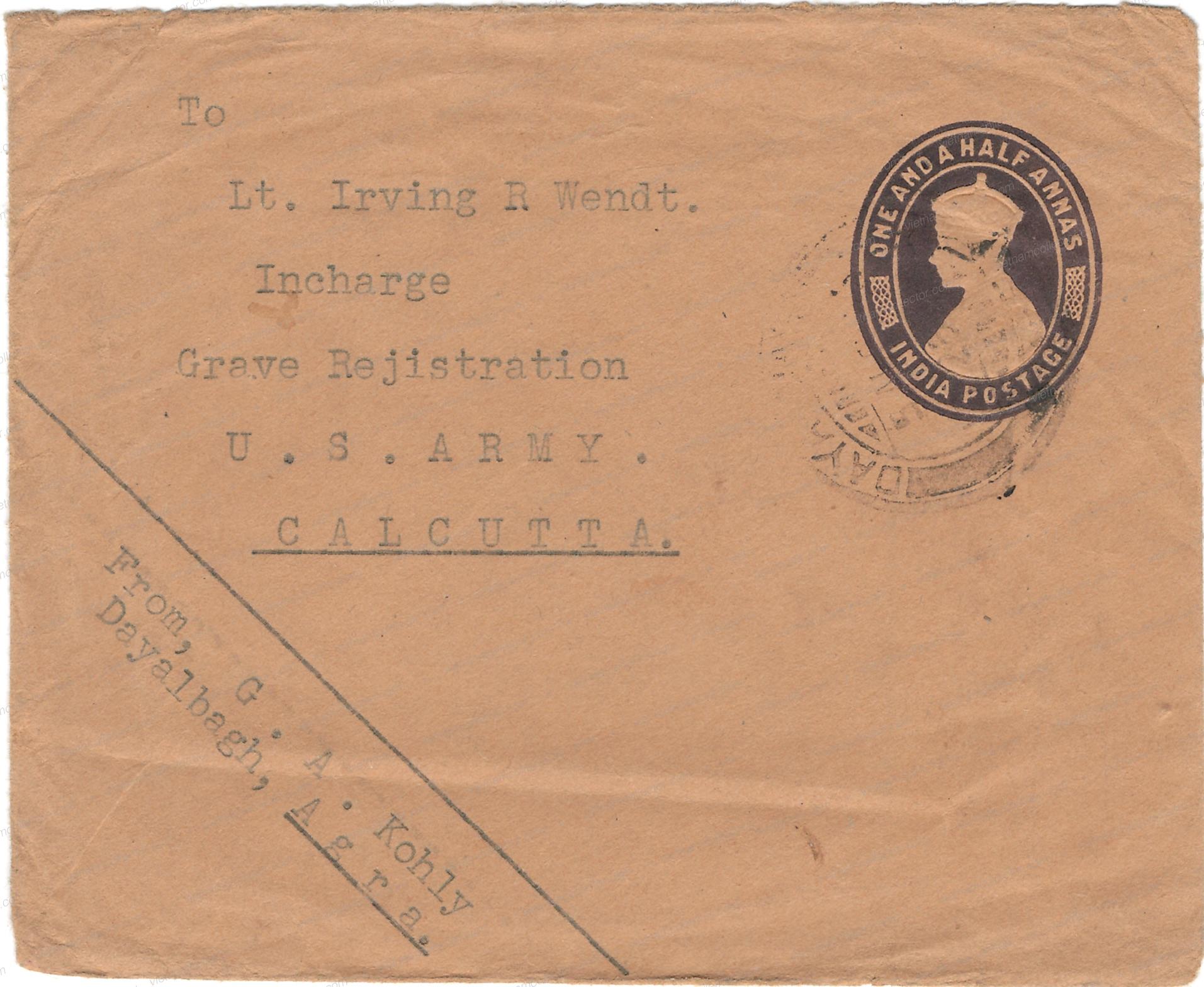 India must have been some sort of staging ground to which Wendt returned repeatedly as this registered air mail letter franked with Indian service stamps and which he mailed to his parents in Michigan in June of 1947 documents. New York City transit and Milan, Michigan arrival cancels on the reverse.

In August of 1946 Wendt relocated to Indochina as the three letters below he sent to his parents document. He appears to have been a prolific writer as he sent three letters in short succession on August 19th, August 20th and August 26th, 1946 to their home in Michigan.

Air Mail letter sent by Wendt from Saigon to Milan, Michigan on August 19th, 1946 franked with two 10C Charner stamps (in two shades of green) , the 30C Rodes and 40C de Lagree stamps as well as the 60C Air Mail stamp paying an overall postage of 1.50P on an international air mail letter. 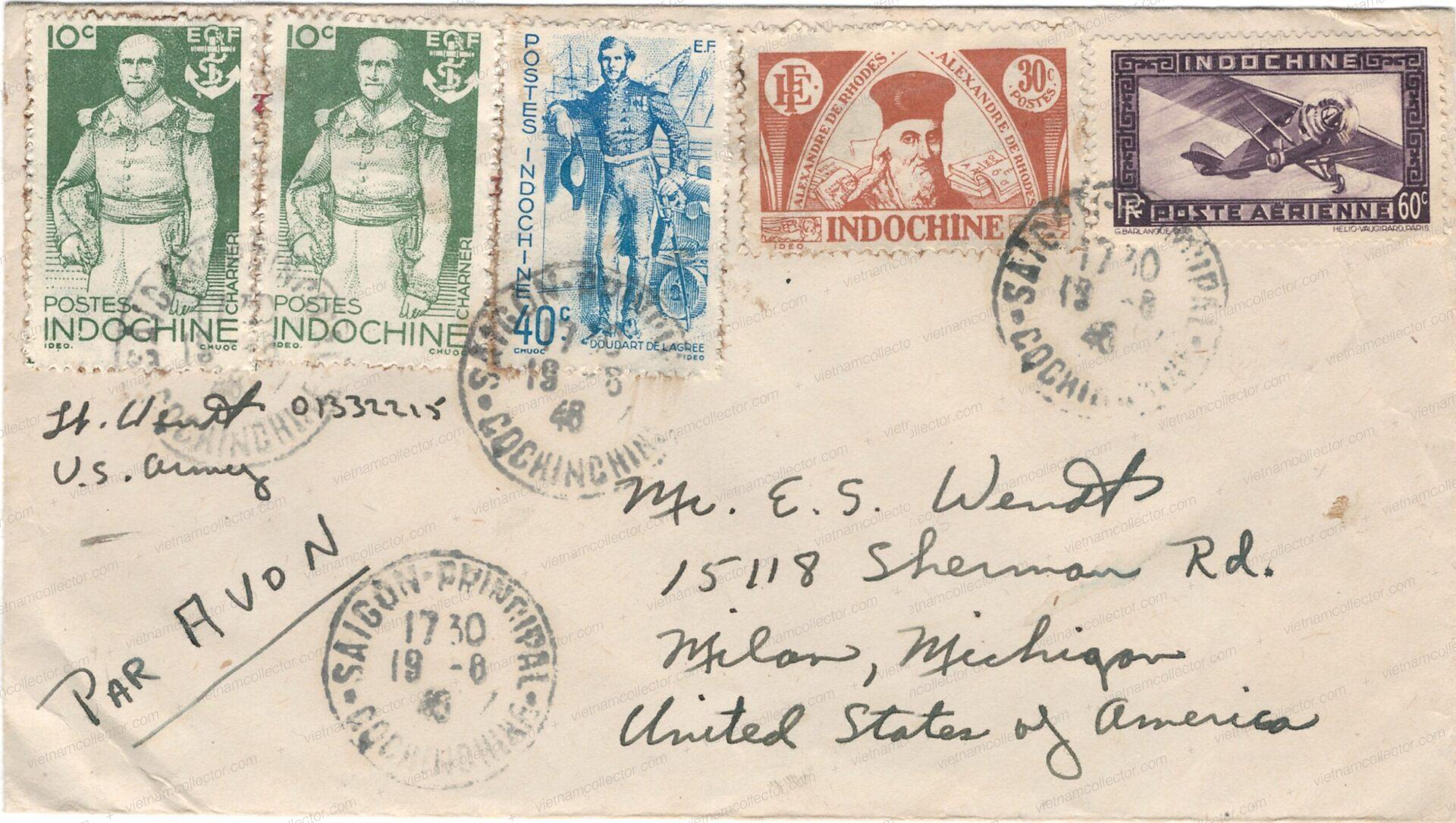 Air Mail letter sent by Wendt from Saigon to Milan, Michigan on August 20th, 1946 franked with 15C and 1P Yersin stamps paying an overall postage of 1.15P on an international air mail letter. He was using a repurposed Red Cross envelope. 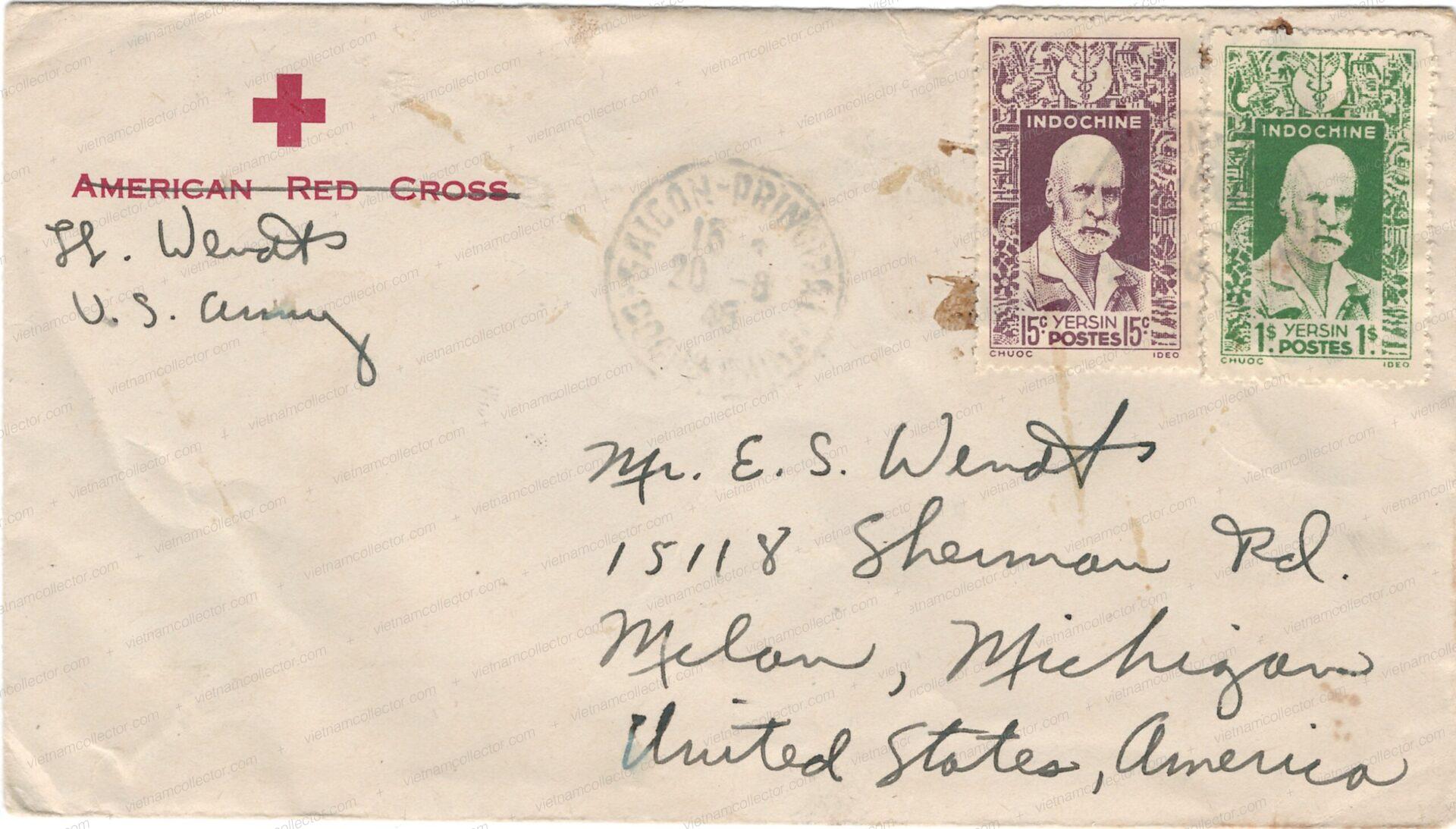 Air Mail letter sent by Wendt from Saigon to Milan, Michigan on August 26th, 1946 franked with two 10C Charner stamps (in two shades of green) , the 30C Rodes and 1P Yersin stamps as well as the 2P Air Mail stamp paying an overall postage of 3.50P on an international air mail letter. 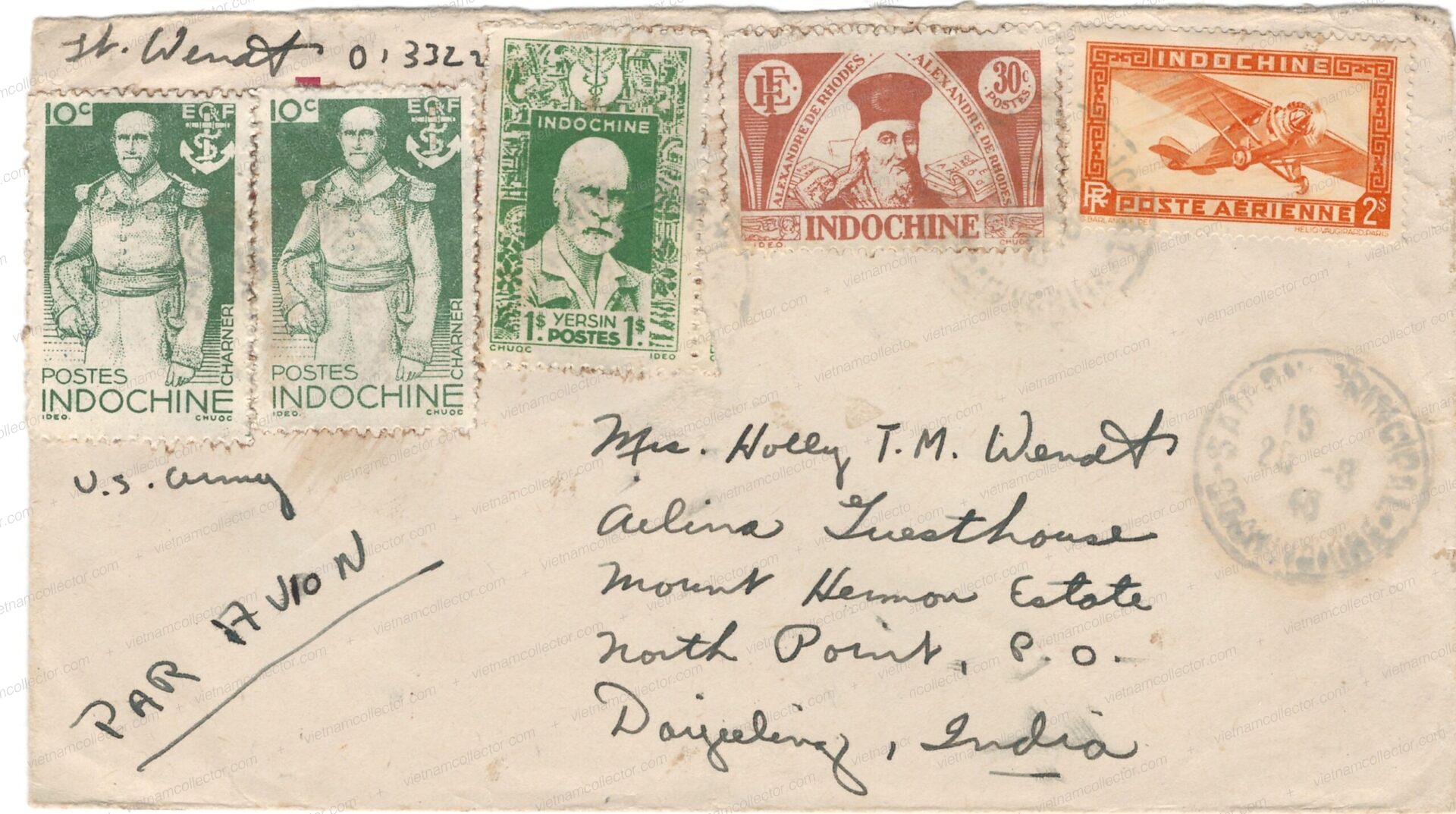 Wendt must have stayed for a relative short period in Indochina as four days later he already was located in Celebes on Sulawesi Island which was located in the Netherlands East Indies (today Indonesia). The post card below was written on August 30th, 1946 in the Empress Hotel in Makasser. On it he documents a few of the places he has recently been: Batavia (Jakarta), Surabaya on island of Java, Balikpapan on the island of Kalimantan (formerly Borneo) and the island of Bali, He also mentions that “Balikpapan was ruined, the Americans bombed everything in sight. Makasser was also bombed by the Americans.”

Post card franked with 76 Cents worth of Netherland-Indies stamps sent by Air Mail to the United States on August 30th, 1946. The journey clearly must have been scheduled ahead of time as Wendt was able to receive a letter from the East Indian Railway Company in Allahabad in India while he was staying at the hotel in Nakasser, Celebes. 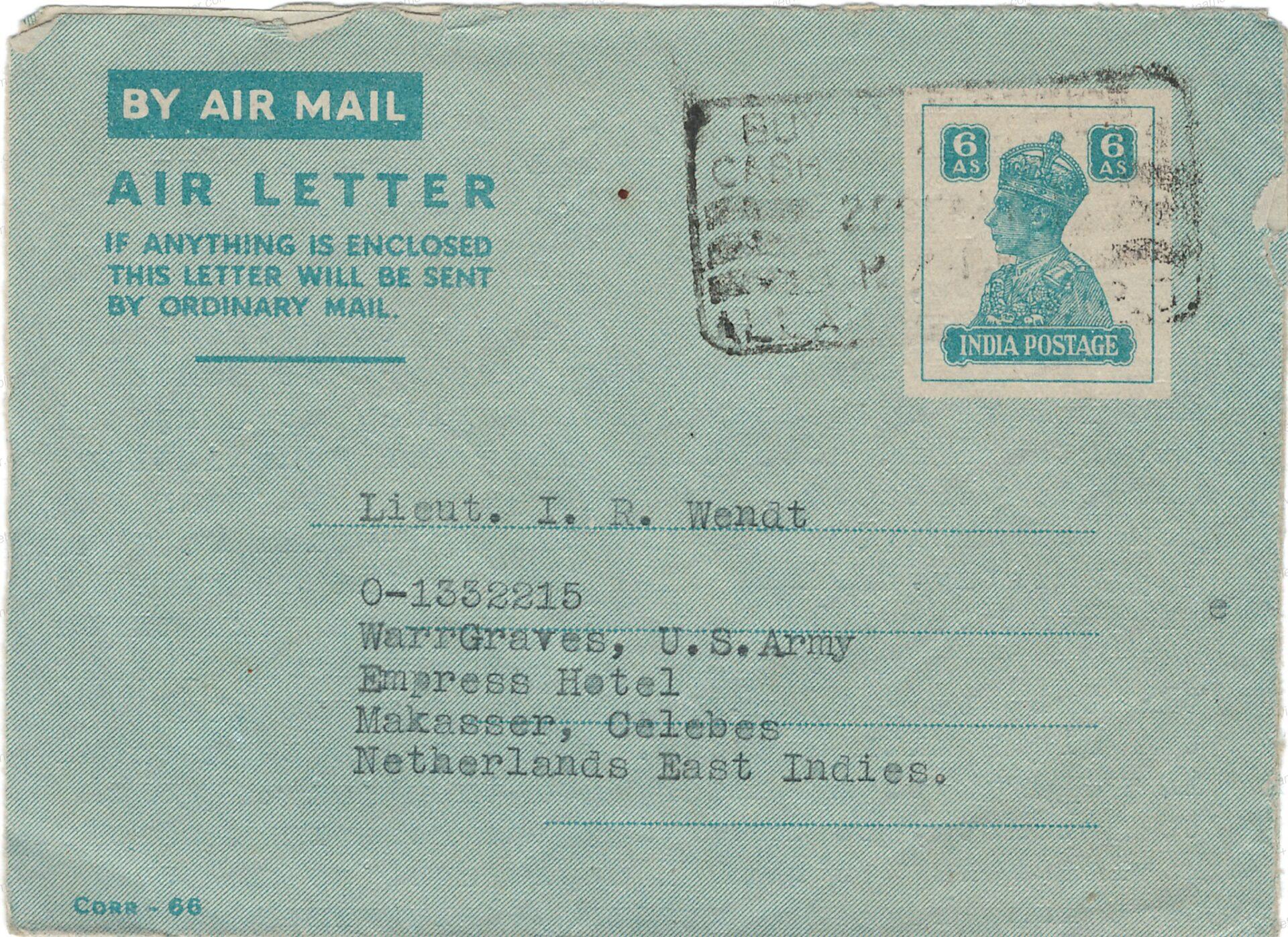 Wendt probably did not stay long in the Netherlands Indies but clearly he returned there in February of 1947. From where he sent a letter from Balikpapan (Borneo) to his parents in Milan, Michigan franked with 3.35 Gilders of Netherland Indies stamps. The final entry to this interesting convolute of postal history is a post card from Tarakan on Borneo to his parents in Milan, Michigan. Franked with 49.5 Cents of Netherland Indies stamps. On it he writes that he is looking forward to seeing them in a few months so presumably he returned to the United Stats in summer of 1947. 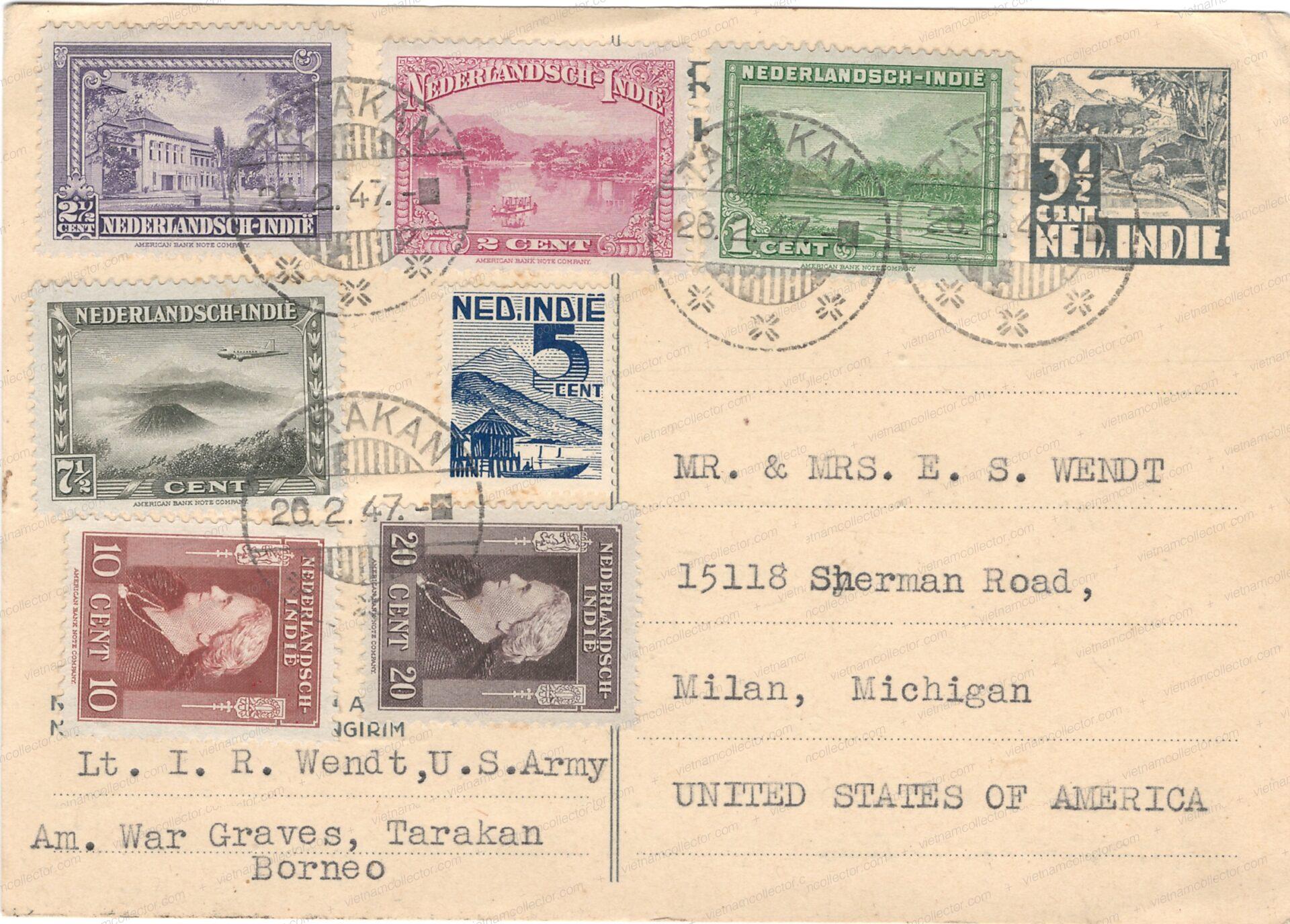 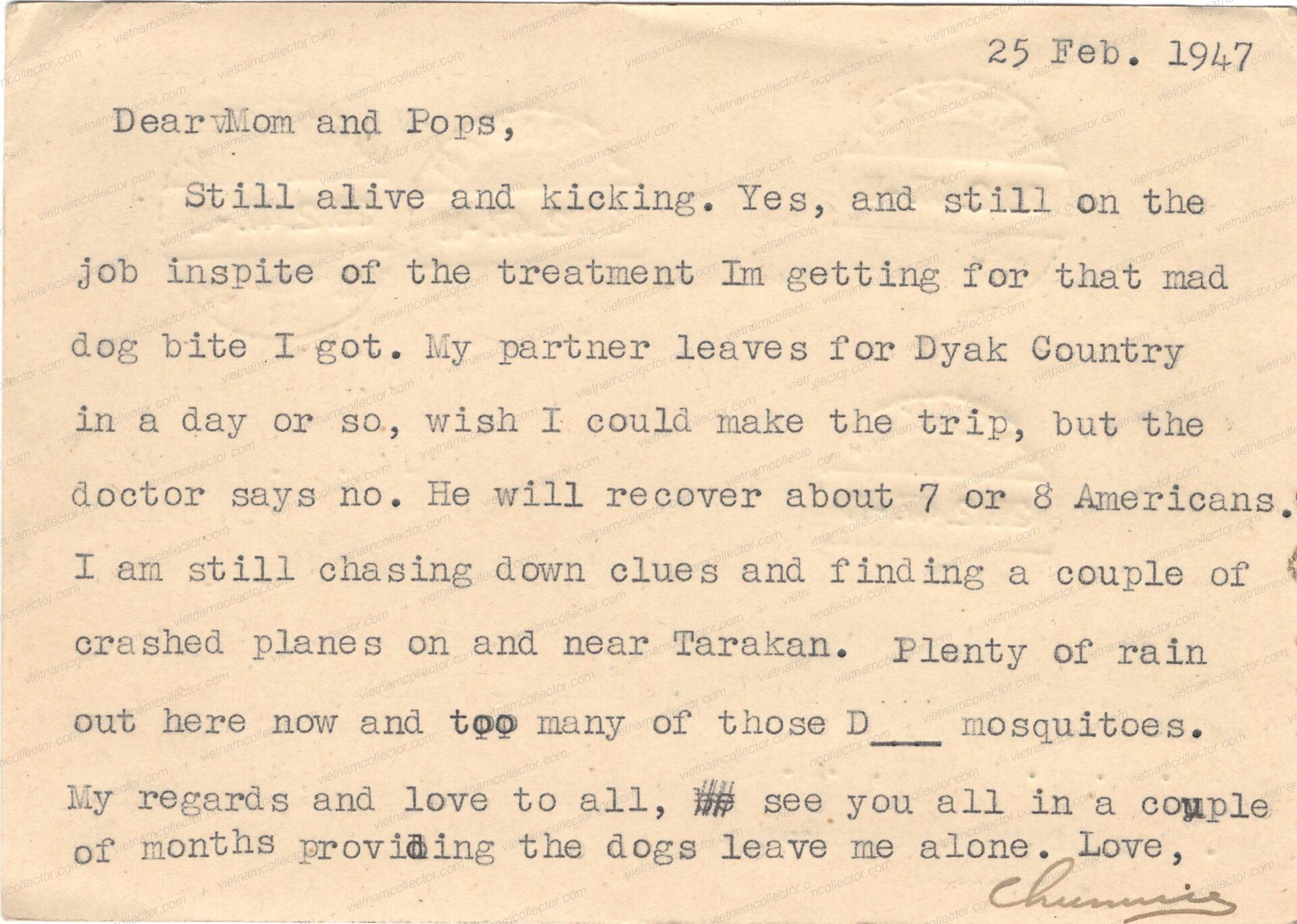 Long after his service in Indochina in the 1940’s Colonel Wendt apparently returned Vietnam as evidenced by this registered letter sent in November of 1964 by the German Ambassador in Saigon to Wendt. He functioned as a Senior Adviser to the 23rd Infantry Division. 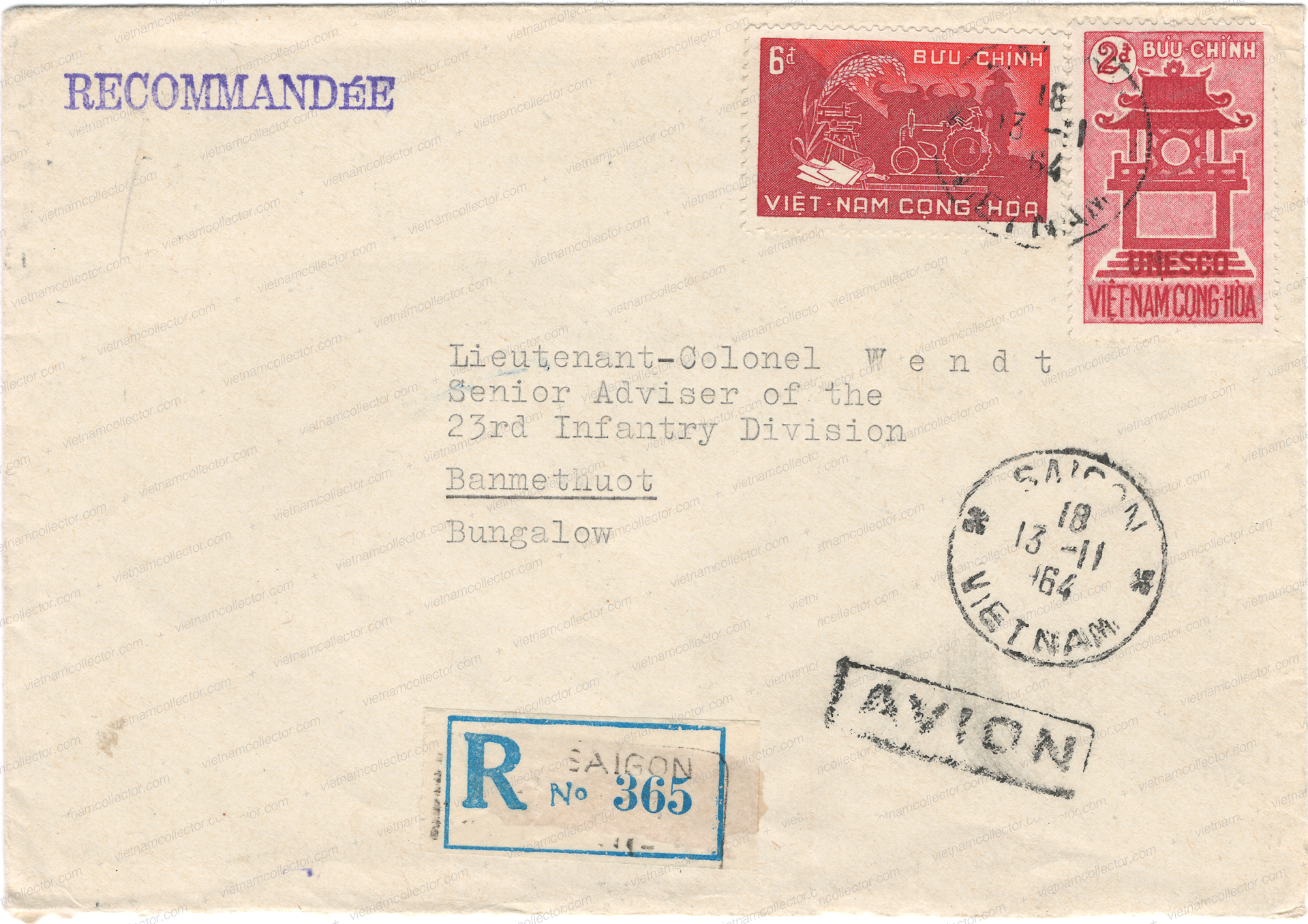 As per his obituary Irving Robert Wendt died of of natural causes at age 89 in 2012:

All covers in this exhibit are ex SICP Member Andrew Crenshaw but are now owned by the editor.