North Vietnam, 3. National Women Congress, March 8th, 1961, Michel Nr. 152-153; This issue again underlines the importance of women in Vietnamese society. Given the severe depletion of men during the war, women were an important economic factor that could not be neglected by the Government. Two values were issued. One with a 6 xu nominal and one with 12xu. The perforation was 11:0. Like other issues from this time period the issue comes on horizontally and vertically ribbed paper. The ribbing was a function of how the printing paper was fed into the printing machine. The ribbing can only be seen on the back of the stamp by holding it into good light. There is no difference in values between the two variations. The set was issued in an edition of 500,000. Below is the official Xunhasaba bulletin that was issued on occasion of the stamps release. 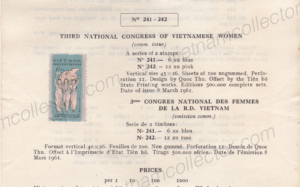 Here is a mint set on horizontally ribbed paper. The issue was printed on very large sheets. In-between the various sheets a white spacer was inserted that contained the total cost of the vertical rows above to that point (in the example 3.00 for 25 stamps) and the number of stamps in the row below (25). According to Klewitz’ notes the intention was, that the large sheets would be cut by scissors at the position of the spacer thus separating the two numbers correctly from each other. However, as can be seen here, this was not always done in that fashion by the post office as it was simply easier to use the available perforation of the spacer to separate sheets. 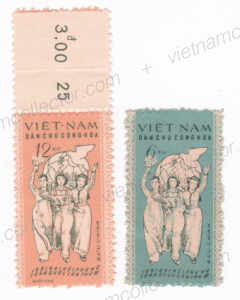 Hers is a mint set in vertically ribbed paper. Note that the top and bottom selvage of the large sheets only contained one number (either the number of stamps or the collective nominal value of the stamp so far). The combination of numbers as seen on the 6 xu value only occurred in-between the individual sheets. 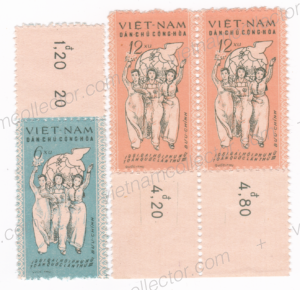 These stamps were not officially released imperforate, however a very small number of imperforate trial proofs have come to market. Rare! 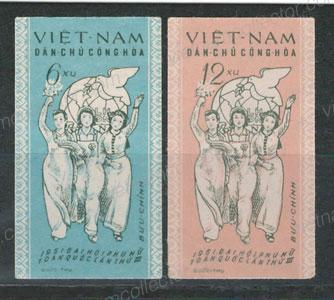 Here is a First Date Cover (Ex Klewitz). It carried the complete set (i.e. 18 xu postage), however, this ws not enough to get the letter to West Germany. The standard letter rate at the time was 50 xu, so the letter was under-franked by 38 xu. Nevertheless the letter was passed without penalty as the writer wrote “Cong Hoa Dan Chu Duc” which stood for Democratic Republic of Germany = East Germany. The standard letter rate to fellow socialist countries like East Germany was only 12 xu. 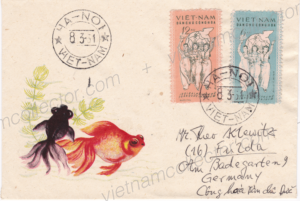 Local letter mailed in Phu Tho featuring the entire set for an 18xu postage. Since the local standard letter rate was only 12xu this is most likely a philatelically inspired mailing. 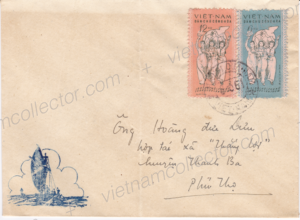 Rare single franking of the blue 12xu stamp on a postcard from Sam-Son (small post office) to East Germany in July of 1961. The sender, probably unaware that the postcard postage only amounted to 6xu, used the standard letter rate of 12xu instead. 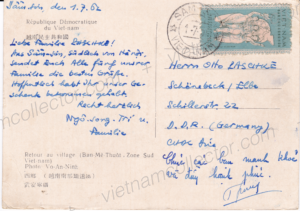 Here is a similar franking, this time with the pink stamp, on a letter from Hanoi to Leipzig, East Germany. This time the postage was correct. 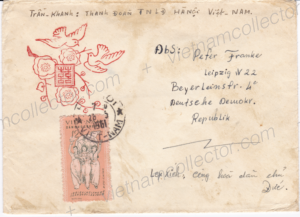 Letter mailed to Klewitz in August of 1964 containing a single of the 6 xu stamp. Overall franking amounts to 54 xu which was slightly above the required rate to Wes Germany of 50 xu. 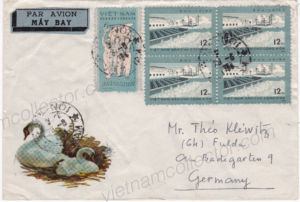 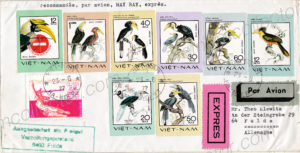 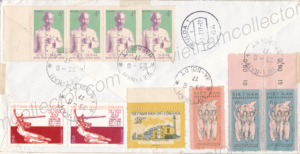 Rare registered express mail letter sent to Klewitz in November of 1978. It carries three of the 6 xu stamps without the name of the designer at the bottom plus many other flower stamps. There is also one 6 xu Women Congress stamp. The overall postage amounted to 4.02 Dong. Fulda arrival cancel on the reverse. Green Fulda custom cachet on front. 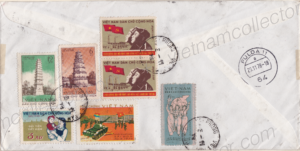 Rare registered express mail letter sent to Klewitz in October of 1980. It carries two of the 1 Dong Day of the Cild stamps plus two of the 6 xu Women Conference stamps for an overall postage of 4.42 Dong. Red “Franked by Sender” hand stamp and green Fulda custom cachet on front.  The zero red free frank was required to produce the R-label as they came out of the same machine. 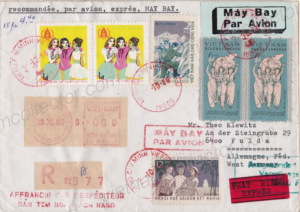 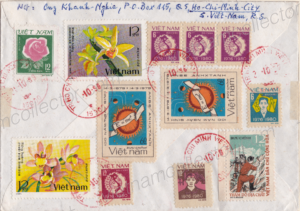 Rare registered express mail letter sent from Ho Chi Minh City to Klewitz in September of 1980. The letter carries the entire perforated Intercosmo set plus Women Congress stamps for an overall postage of 4.45 Dong. The zero money red free frank was required to produce the R-label as it came out of the same machine. Green Fulda custom cachet on front. 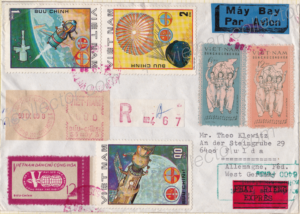 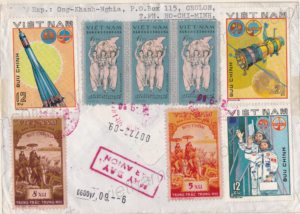 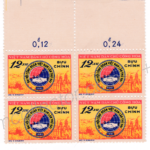 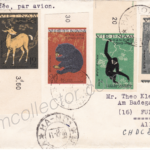