North Vietnam, Scale, Postage Due Stamp, July 1955 (Michel Nr. P14); Prior to the issuance of this first postage due stamp in North Vietnam the country had simply used hand stamps, that were mostly struck in black ink (rarely in red or other colors) directly on the envelope to indicate to the delivery person that prior to handing over the letter he/she had to collect the postage that was due. Like in Indochina before, the form and shape of the hand stamp was not centrally ordered by the central post office but it was left up to each local office to produce their own hand stamps. Small post offices did not even bother to have a hand stamp but simply wrote “T.T.” on the envelope. Some hand stamps were in the shape of a diamond or rhombus shape. Others were in rectangular boxes. What they all had in common though were the letters “T.T.” which stood for “Tiem Thieu” or “Postage Due”. Sometimes a capricious postal clerk also struck this hand stamp directly on a postage stamp that was affixed to the envelope for paying the fine so the stamp could not be re-used later. But this was simply a local preference and was not mandated by the central postal administration. In order to encourage the public to properly pre-pay for mail that was dropped into mail boxes, postal authorities doubled the missing postage to assess postage due for a 100% sucharge or fine of the missing postage. That practice was ended in 1955, when the first postage due stamp was issued, but later on taken up again and continuous until today as after 1958 no new postage due stamps were produced. The Vietnamese Postage Stamp Catalogue reports that the stamps were produced in the National Bank Printing Works with a perforation of 11.0. Scott reports a perforation of 11.5 and Michel reports 12.5. This led the editor to check which number was actually true. He measured all of his stamps and it turned out that Scott was mostly right. None of the 100+ stamps measured was 11.0 or 12.5, all but one had a perforation of 11.5, however a single mint stamp had a mixed perforation that measured 12.5:11.5! So, clearly there are perforation varieties that have yet to be catalogued. 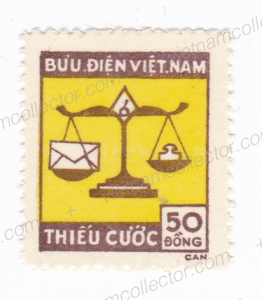 Please note, that paint “kisses” are the norm for this stamp and do not represent errors that justify price increases. Apparently it was standard during the production runs to stack the still wet sheets so that most of them show a more or less clear mirror image on the back like the one shown here. 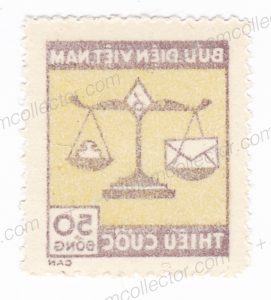 Here is an original sheet of 50 with a perforation of 11.5.(yet unlisted perforation) 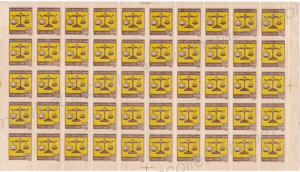 Michel lists the frame color of the stamp as brown and that is true for most stamps. However, on some specimens the editor has found a frame color that according to the Michel Color Guide represents “dark-sienna” as shown here oaths CTO stamp.. 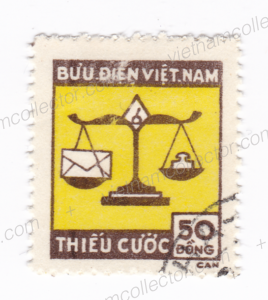 Perforation Errors are known. Here is a block of four that shows a double perforation (11.5) in the vertical center and lacks any horizontal perforation. 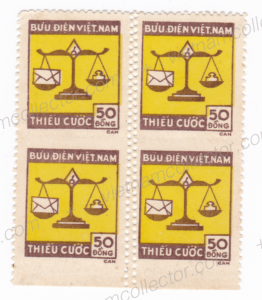 Please note that on this block the color “kiss” is only yellow. So the brown color was already dry when the sheets were stacked. 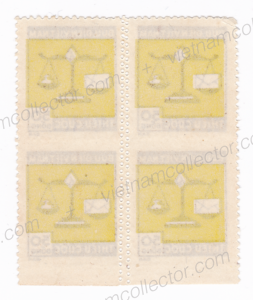 Since these stamps were, by definition, only used on in-coming local or international mail it appears that virtually all postally used stamps were destroyed due to recycling or during the decades long 1st and 2nd Indochinese War which means that the great majority of used stamps are cancelled to order. The editor has only seen four covers bearing the stamp. Two were illustrated in Ta Phi Longs Book about North Vietnamese Military Mail  and the others were contained in the Klewitz collection. Klewitz intentionally sent an under-franked letter to a contact in Vietnam who then made sure that the stamp was used to pay the resulting fine. Klewitz wanted to collect every North Vietnamese stamp on cover and this was his way to get this accomplished. Here is a very rare postally used specimen that was used in 1959. It is the only one the editor has seen in over 25 years of collecting Vietnamese stamps. 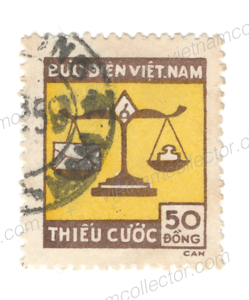 With postally used stamps basically not being available the only way to obtain a used specimen are the cancelled to order ones that were distributed by Xunhasaba. They are easily identifiable by the standard Hanoi canceler that is always struck across four stamps at a time. 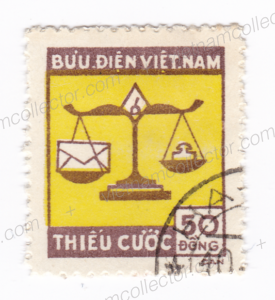 Below is a letter bearing s single franking of the scale stamp on a letter to Vienna, Austria. It looks like it was cancelled in March of 1976. While the stamp was still valid postage then it had been devalued by 1,000:1 on March 1st, 1959 so was only worth 5 xu which was not enough to cover the postal tariff in 1976 (1 Dong to Western countries). So this letter represents a favor cancel for philatelic purposes. 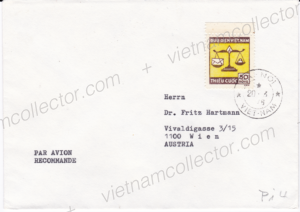 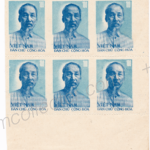 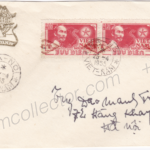