This section demonstrates postal mail markings that can be found on incoming Indochinese mail.

Single franking of an FM perforated 10C French stamp on a military postcard sent from Tangiers in Morocco to Phu Doan in Tonkin November of 1911. Military administrative cachet on front and reverse. Phu Doan arrival cancel on the reverse. 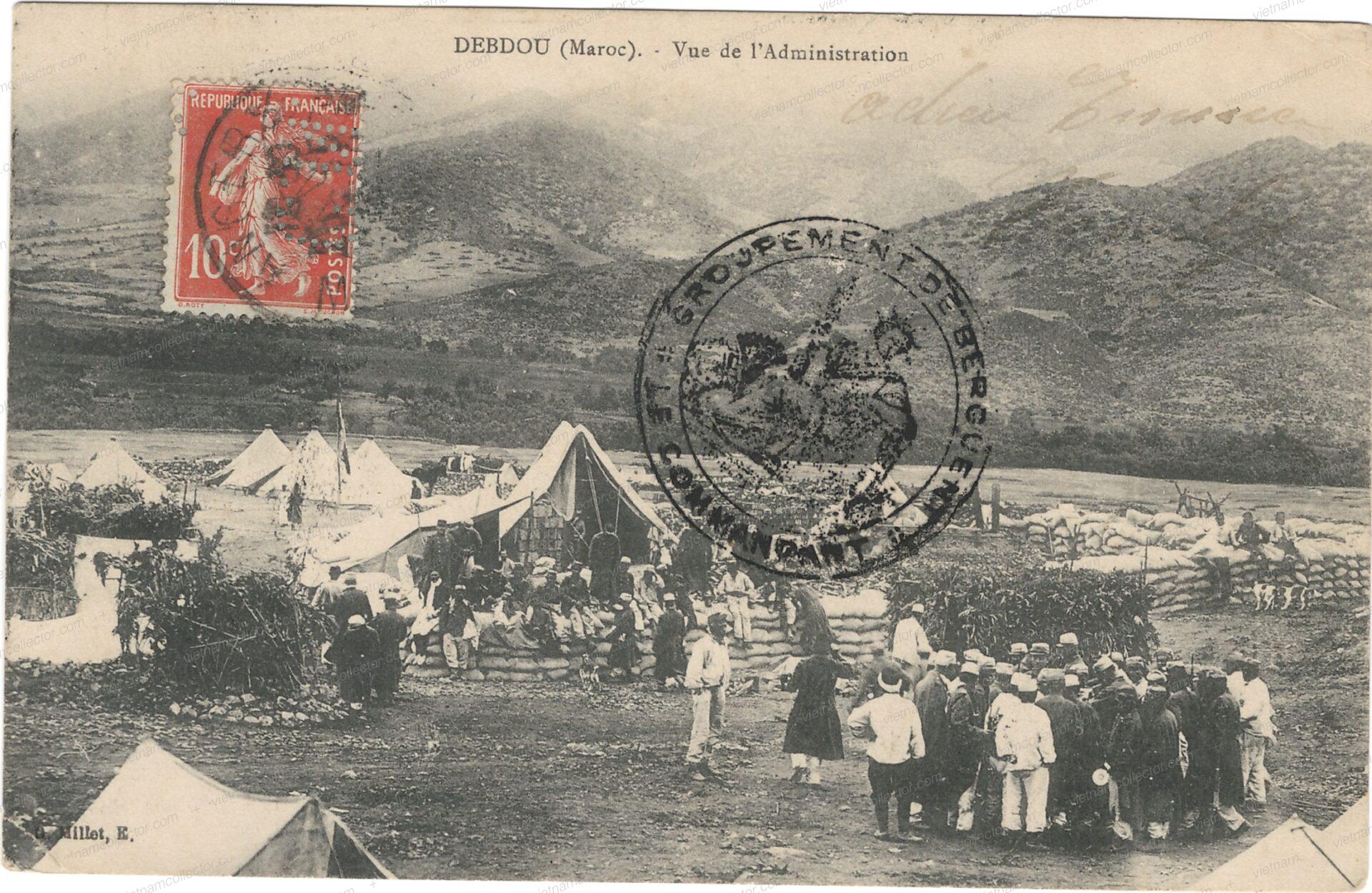 International surface letter sent during World War I from Hamburg to Saigon. Germany was at war with France and as a result the letter received a boxed cachet stating “Return due to State of War”. It is not clear if this was due to an interruption in the means of transit or simply a choice by Germany not to deliver letters to an enemies colony. 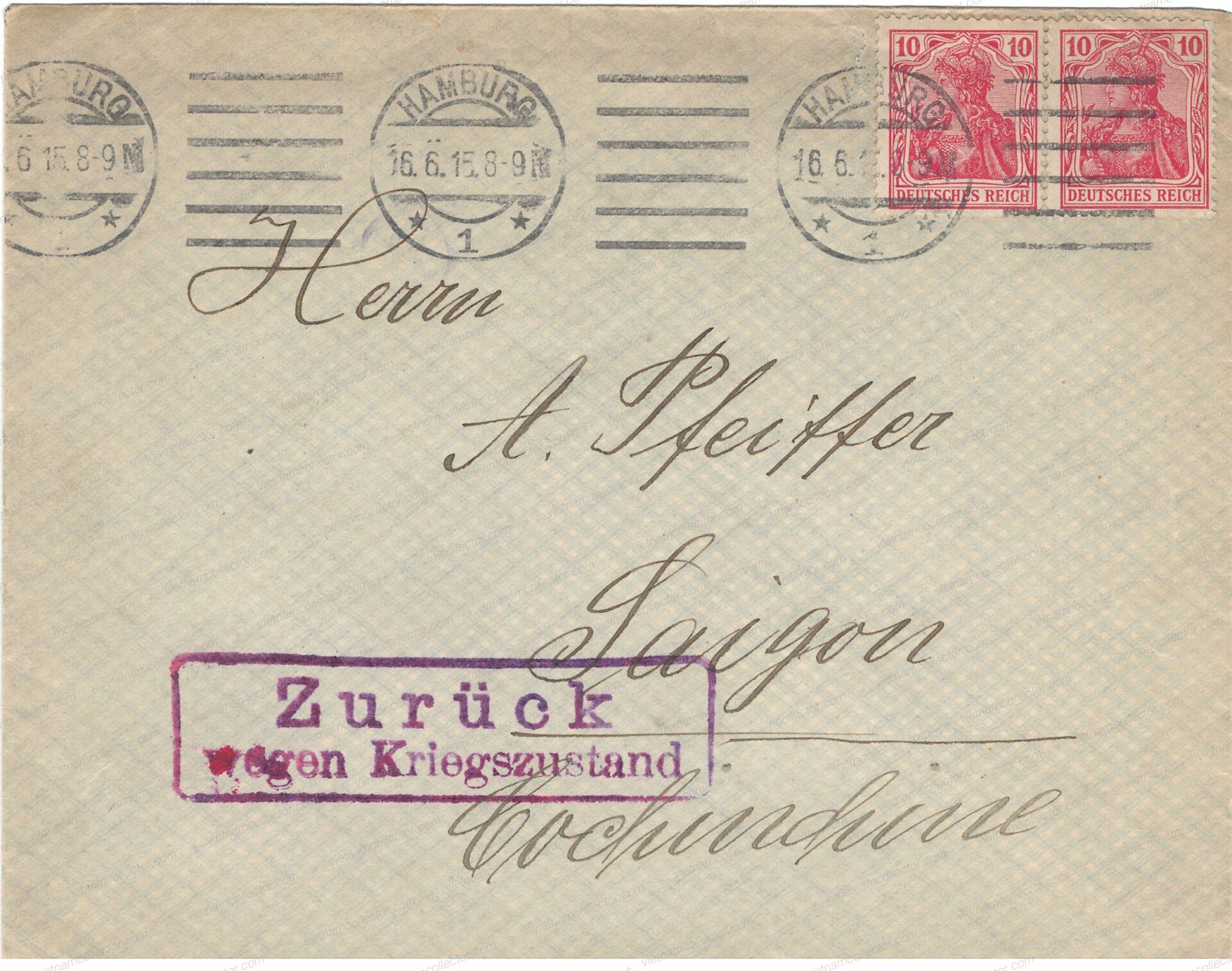 International air mail letter sent from France to Can Tho in Indochina on February 17th, 1929. The letters put on a flight two days later. According to the book “Recovered Mail” by Henri L.Nierinck “The plane left Le Bourget at 5:55 pm but a short time later it had motor troubles and had to land in the outskirts of Bondy station. The plane was completely destroyed. The occupants of the plane: Costes, Codos and Bellmonte were wounded. The plane had to make a quick flight to Indochina passing by Tunis, Tripoli, Cairo, Karachi, Allahabad and Hanoi. The mail was returned to senders with the special violet cachet. 542 cachets received by mistake the ordinary cancelation instead of the special cancellation (Poste Aerienne France-Indochina 18h. 19.2.29) The administration cancelled the earlier franking by affixing a hand cachet “ANNULE” on the stamps. The covers received for the second time a franking and were cancelled by the special cachet.” Valued at Swiss Frans 350 in the 1985 catalogue. Rare Crash Cover. 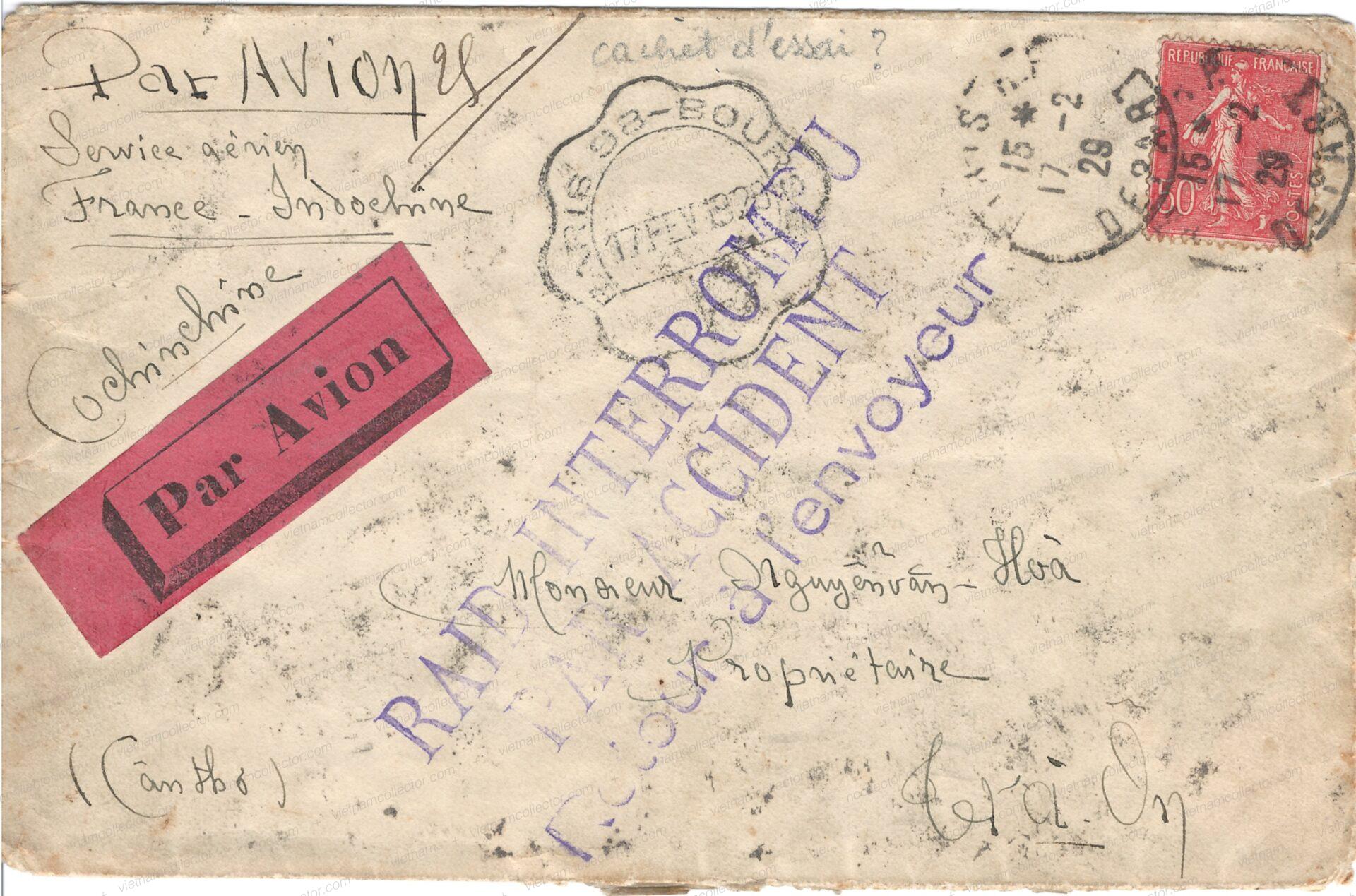 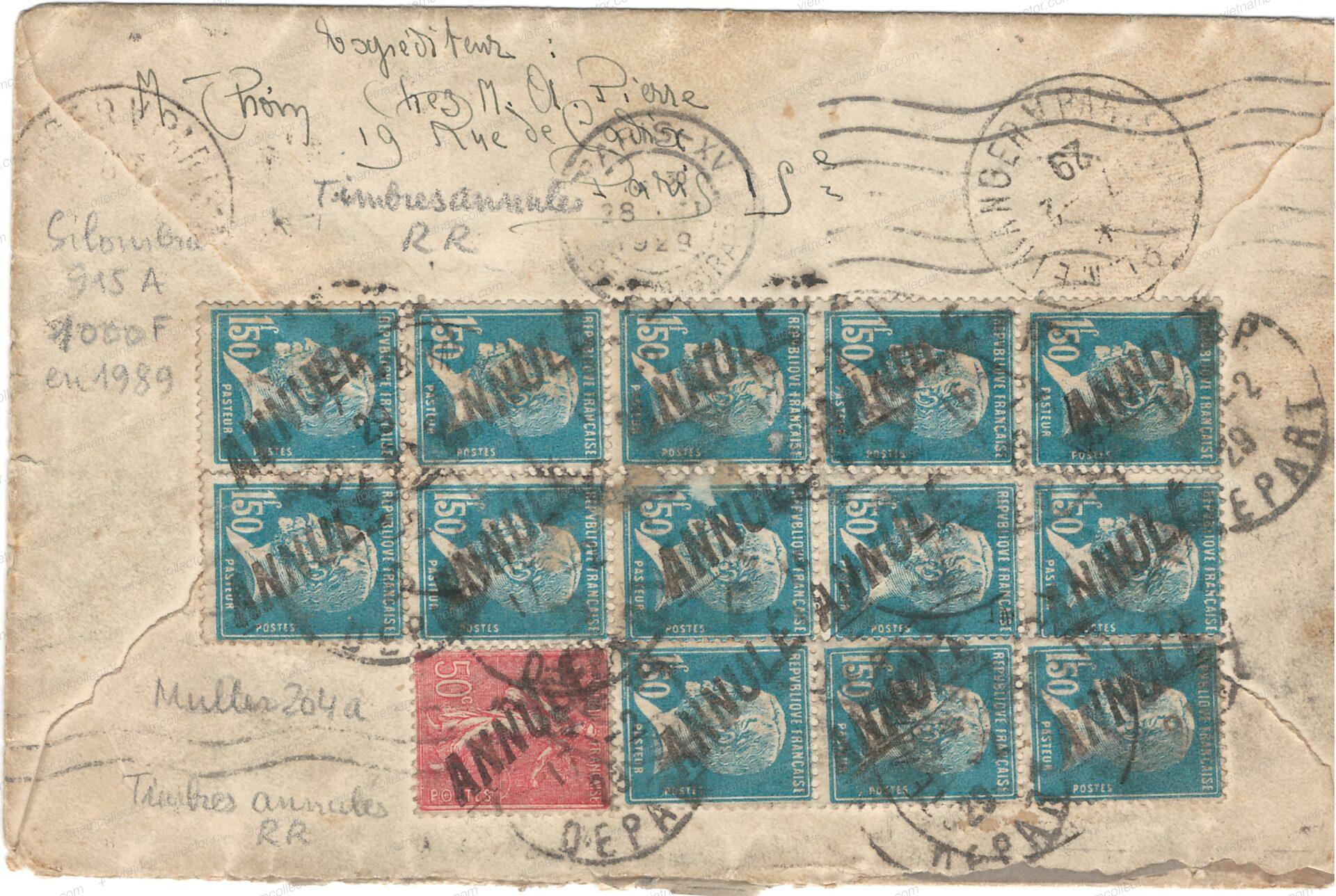 Here are two Crash Covers from the same flight but these were correctly cancelled, so they did not receive the additional “ANNULE” cancelation. Valued at Swiss Francs 80 each in the 1985 catalogue. 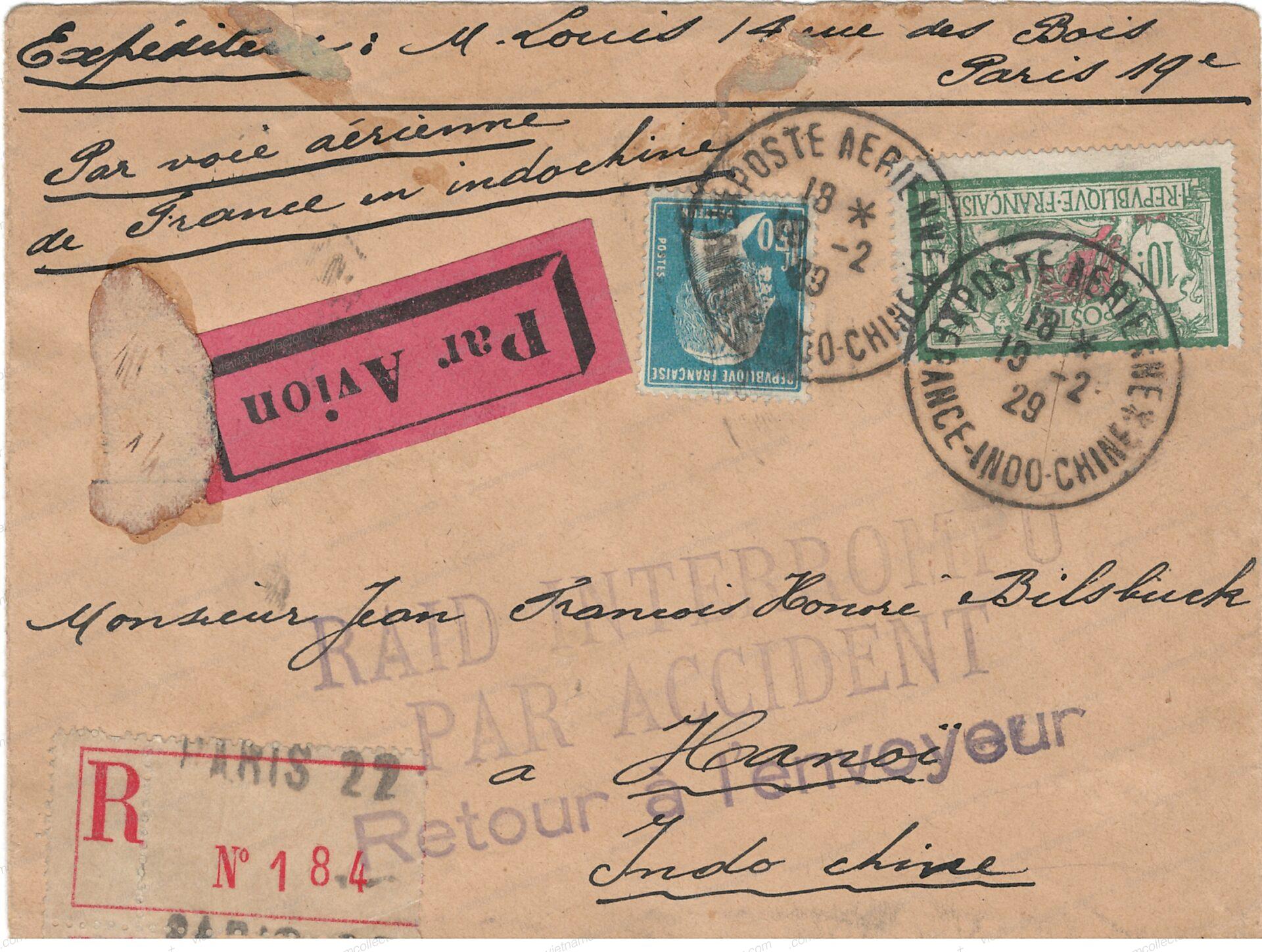 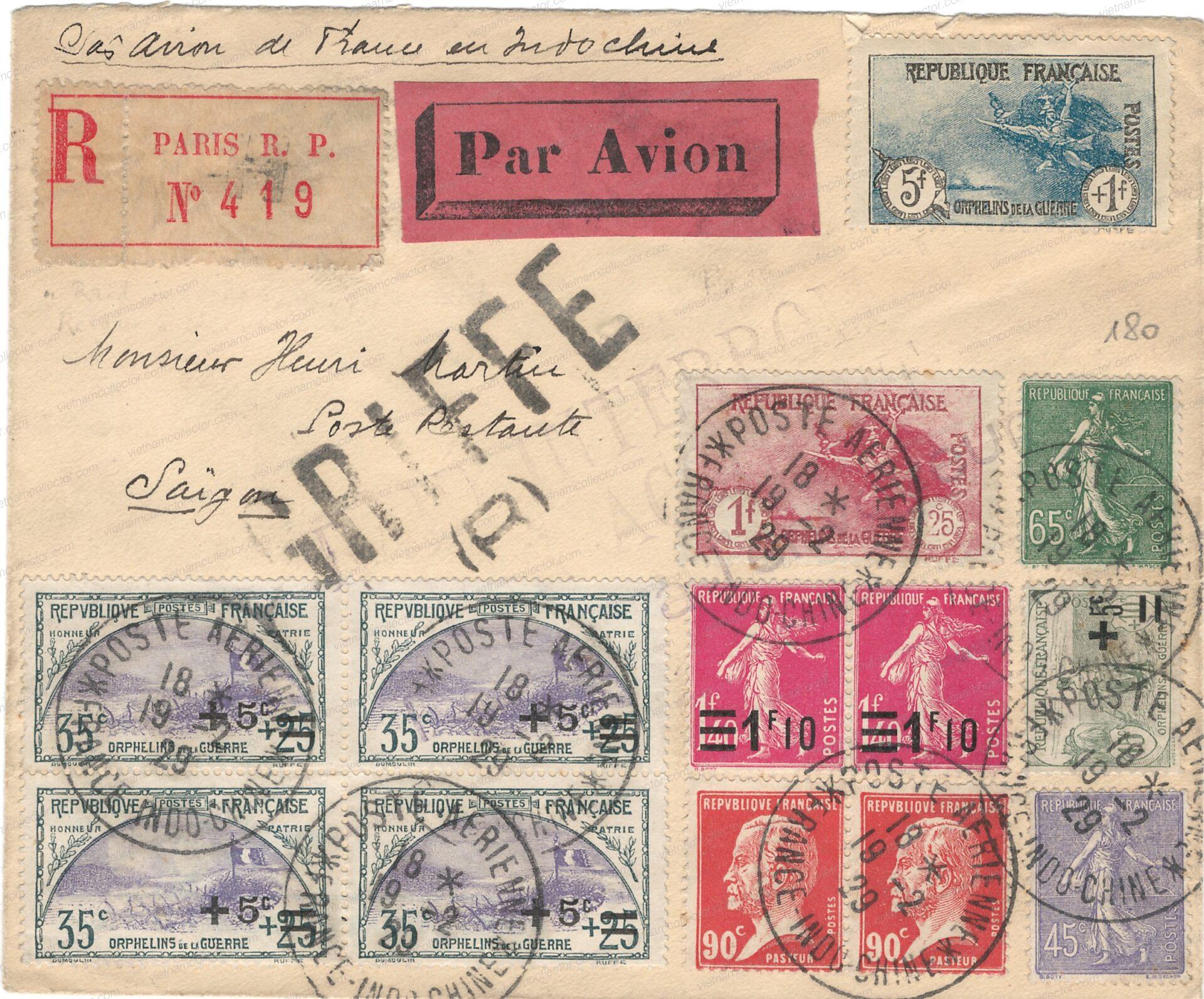 International Air Mail letter sent in late September of 1939 by the Hong Kong & Shanghai Banking Corp. in the Netherlands to  a fellow office located in Saigon. World War II had started a few days earlier and as a result the letter was censured by the French military upon arrival. Apparently this early into the war the authorities did not have pre-printed censor tape at the ready and so standard masking tape was used to re-seal the letter. Military censured cachets on front and back. Bangkok trust and Saigon arrival cancels on the reverse. International letter sent in January of 1940 from Malaysia to Saigon. Malaysia was a British colony and since World War II was in full swing the letter was censured by the British military  as indicated by the “Passed for Transmission” cachet on front. Saigon machine arrival cancel on the reverse. 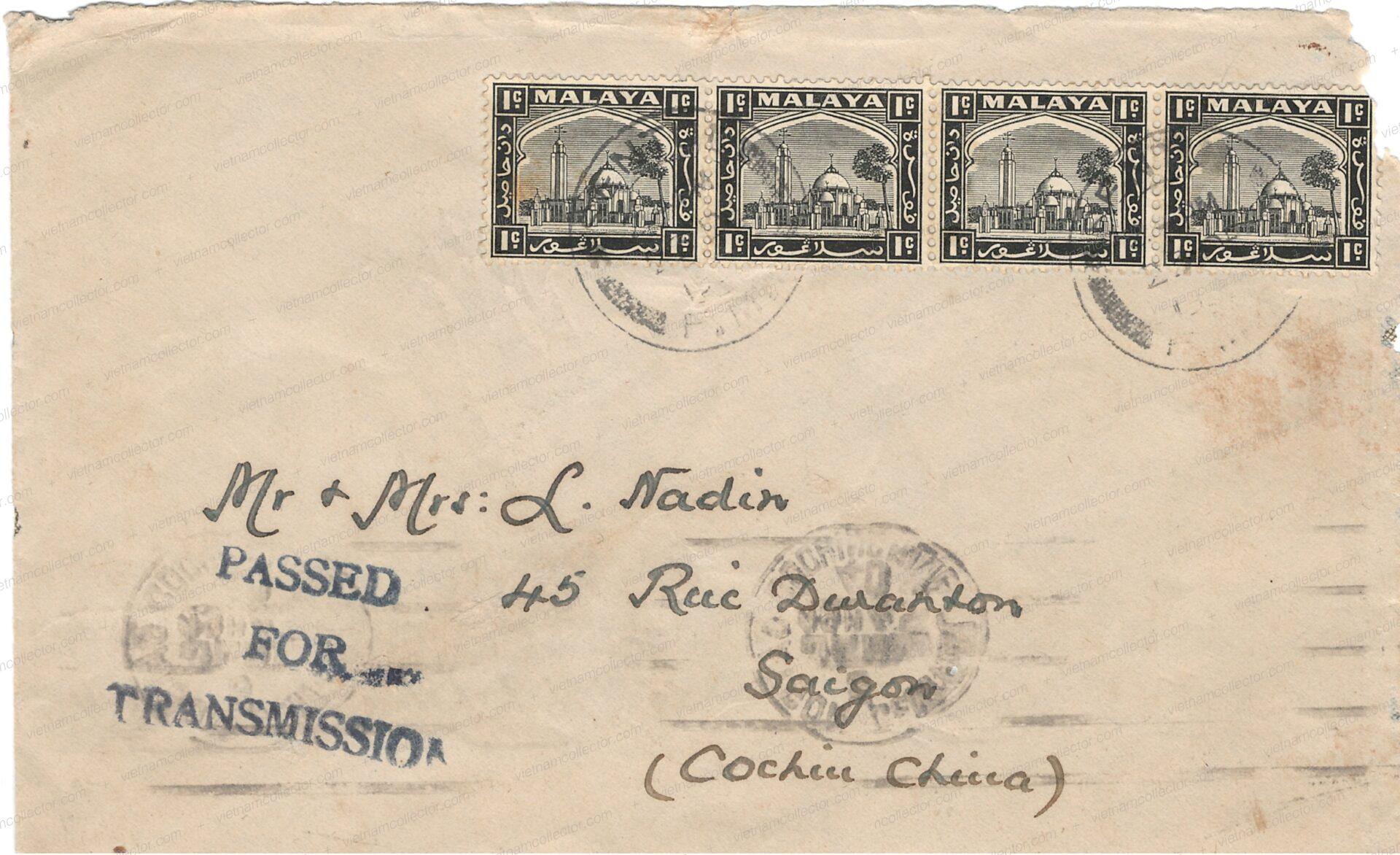 International air mail letter sent in March of 1941 from Prades in the South of France to Hanoi. Despite the air mail envelope the letter was routed through the Orient Express to Lydda (Lot) that was located in Palestine. The train connected Paris with Constantinople (Istanbul) through Milano, Venice and Belgrad. The letter was instructed to be carried the “car de deposit”. Hanoi arrival cancel on the reverse. 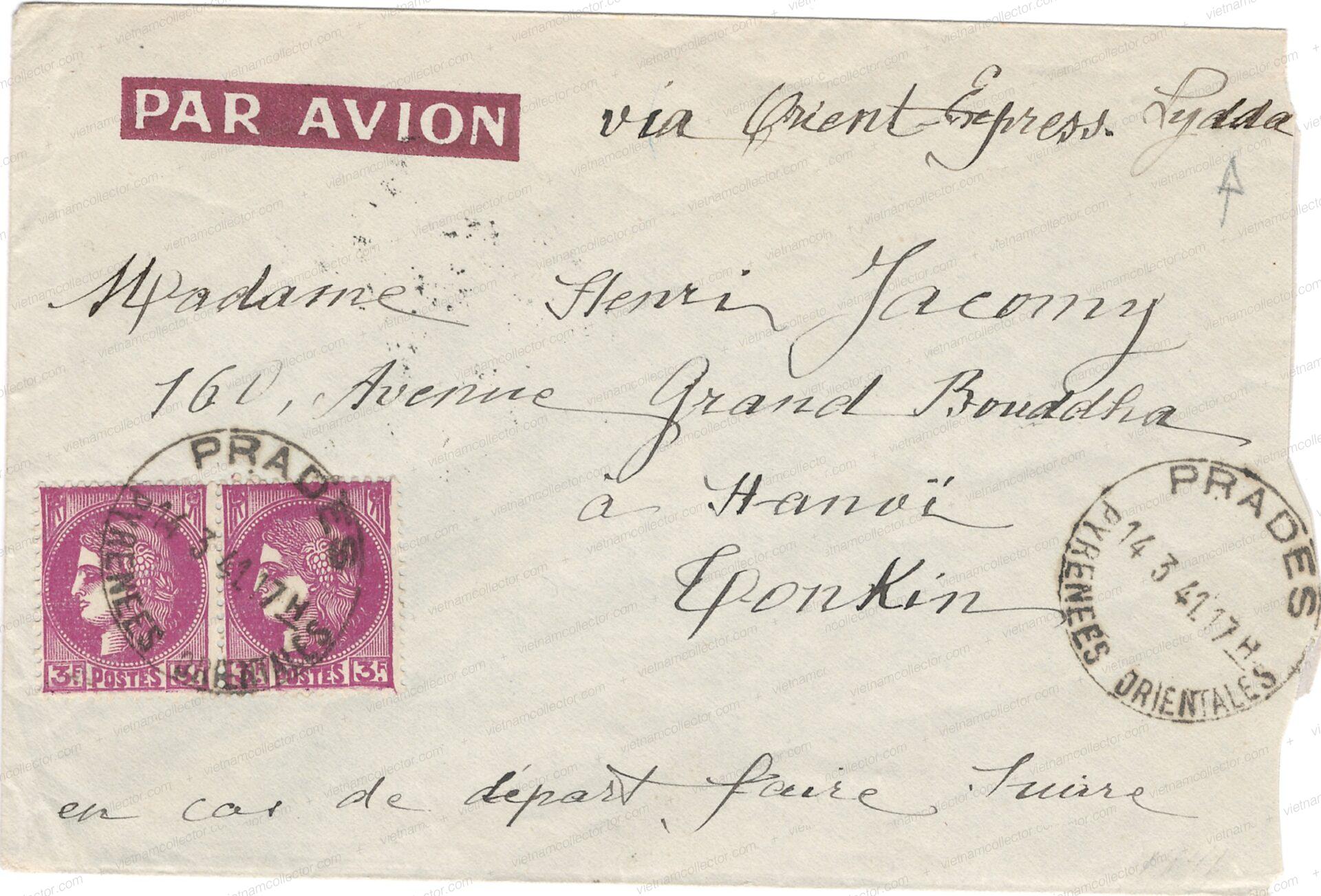 Here are three philatelic letters sent on the occasion of the re-opening of the air line route from France to Indochina on June 11th, 1946. Some letters had already left Saigon right after the war in October of 1945 but this was due to military flights. These letters document the opening of the civilian line. 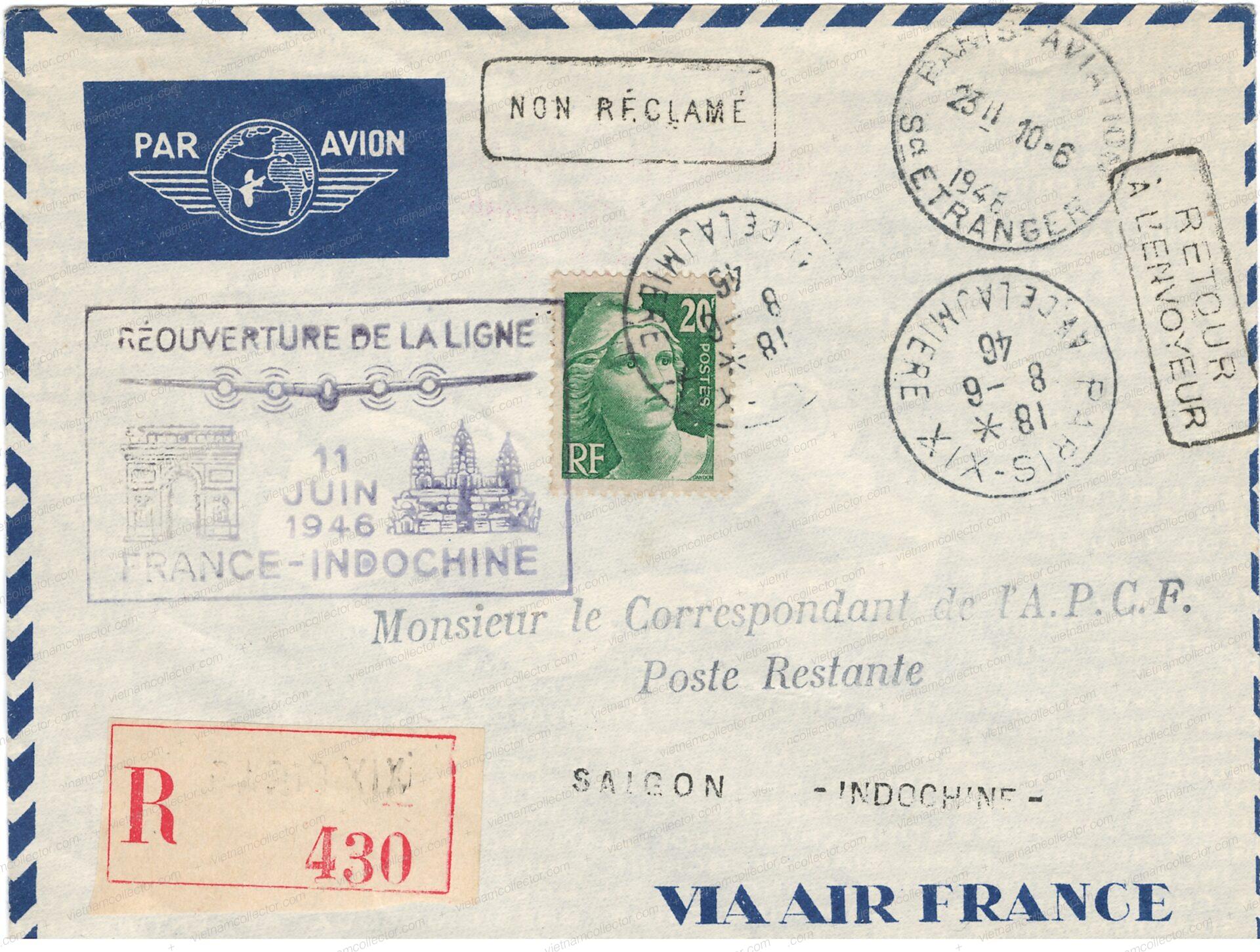 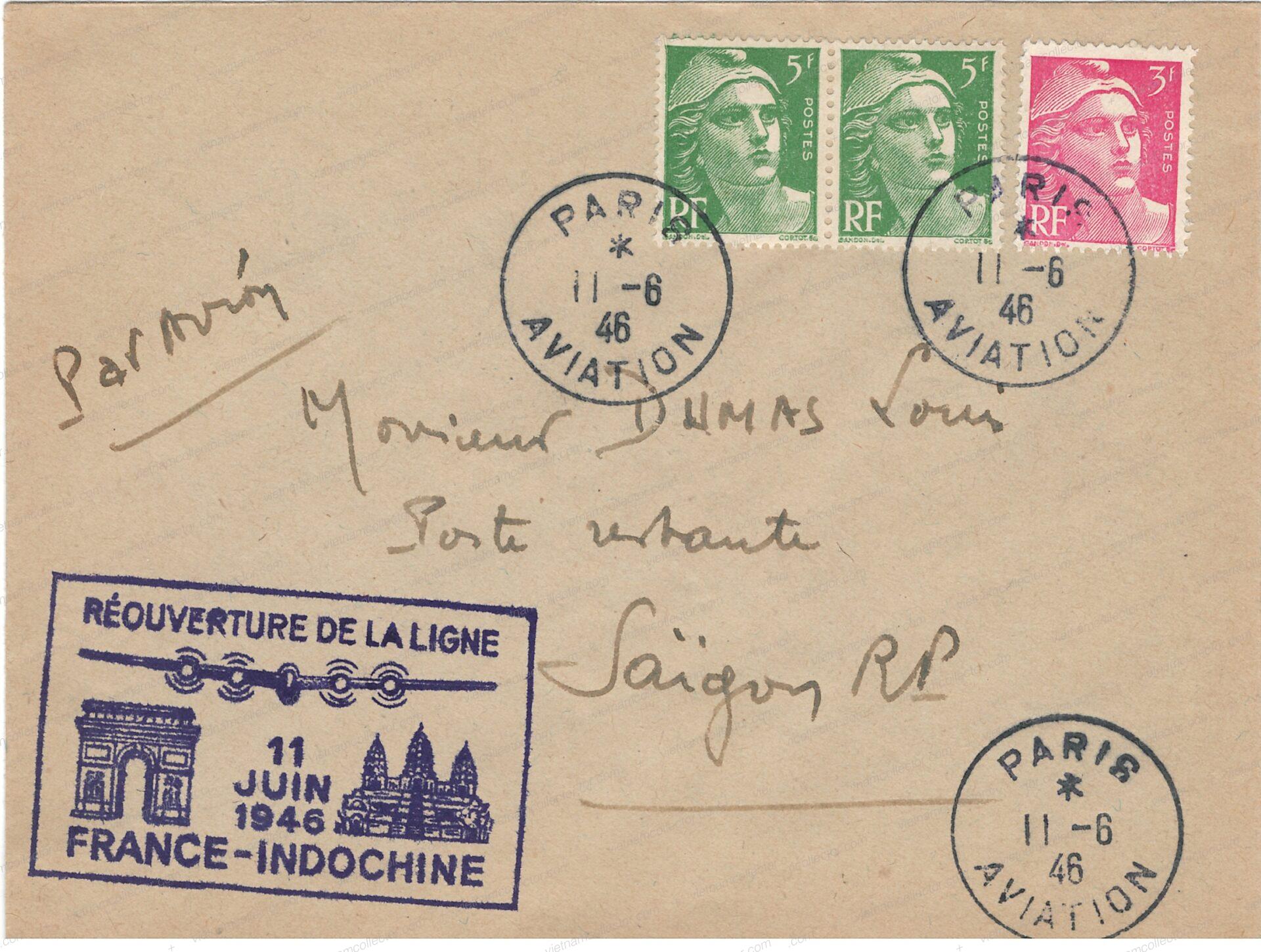