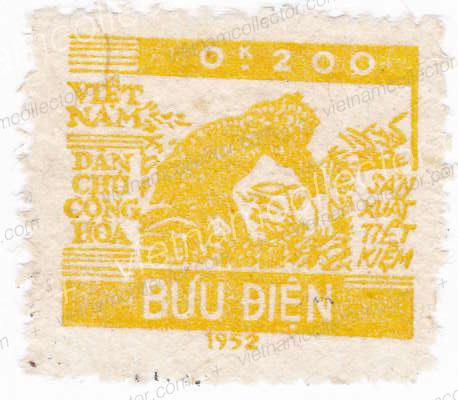 Once in a while, a North Vietnamese service stamp that was supposedly not issued by postal authorities comes to market and it is always described as very rare. Price demands for the stamp usually vary anywhere from $400-600 but last summer a large auction house in Germany offered the stamp for €4,700 (roughly $5,650 at today’s exchange rate) by falsely stating that the stamp had not been offered for 50 years on the market. In fact, it had been offered numerous times on Delcampe just in recent years. Nevertheless, it actually sold for 90% of the offering price at €4,200 (approx. $5,050). Together with the hammer charge the buyer therefore paid over €5,000 or roughly $6,200 for this stamp. Based on this extraordinary result it is worthwhile to take a closer look at this stamp.

On its face the genealogy of the stamp looks pretty-good. The well-known philatelist Theo Klewitz reported the issuance of this stamp back in 1955 in his publication “Die kleine Briefmarkenkunde” along with the other values in the set (0.600kg Rice, 1.000kg Rice, 2,000kg Rice and 5,000kg Rice). Clearly, Klewitz had been told by his high-level Vietnamese philatelic contacts that the stamp was planned for issuance. However, later-on, he manually struck the 0.200kg Rice value from his own copy of the publication[1].

He left no remarks as to why he did this but we can surmise that, after publication of his booklet, he was later-on told by his informants that the stamp had not been issued after all and that he therefore corrected his own internal record. The author is unaware of any correction notice that Klewitz may have published to his readers or SICP members. Clearly, based on this background it is entirely possible that the stamp had in fact been prepared but not been released and that the un-issued stamp might slumber in the postal archive of North Vietnam along with other non-issued stamps.

However, on closer examination this story does not hold water. By July 1953 the standard letter rate for official mail was already at 0.600kg Rice and so issuing a 0.200kg Rice nominal value would have only made sense if it was destined to be used for less expensive mailings such as domestic printed matter. The author, however, is not aware of any domestic printed matter mailings by a NVN Government office. Also, by closer examining the 0.200kg Rice stamp it becomes clear, that it was not printed of the same plate as the other issued values. While the stamp image dimensions are identical to other values, that cannot be said about other features, namely:

• the “1952” at the bottom of the stamp uses numbers that are clearly different from the typeface used on the other four issued stamps (from now on called “the originals”).

• the rice husk that is depicted surrounding the human harvester is drawn much finer in the originals and thicker/cruder in the fake.

• the paper of the fake shows vertical lines that are similar to a water-mark. These lines are not present in the originals.

Overall, the quality of the image is much cruder and letters are more jumbled on the fake as on the originals. 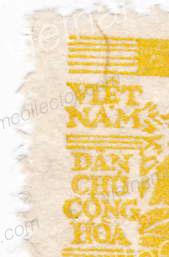 Fellow member Jean Goanvic shows on his website an imperforated specimen in a slightly brighter yellow, that he speculates may be a trial proof. Due to the color the image is very difficult to see but he also features a black and white scan of the same stamp on which one can make out the details. The image is in fact slightly different in appearance (mostly the lettering) than the fake described above, but overall the engraving of the so called “proof” is equally poor in appearance than the fake and nowhere near the engraving quality of the originals. Also, the “proof” is printed on the same paper showing the same vertical lines “water-mark” as the fake.

It should also be noted that imperforated “proofs” of the issued nominals (0.600kg rice, 1.000kg rice, etc.) are offered sometimes on auction websites. These “proofs” are printed on slightly tan paper but their appearance overall (other than the inserted value, that of course changes) is identical to the 0.200kg rice. So, clearly the forger manufactured multiple plates to produce fake “proofs” of all nominals.

Vietnamese Postal Authorities have regularily solicited multiple versions of a stamp before it went into print; sometimes from multiple engravers. They were either provided hand-drawn by the artists but sometimes the engraver already provided print phases from engraved metal plates which reflected the ultimate print quality. Both, drawings or plate prints were always done in a highly professional manner. The author is unaware of any case in which first a crude plate version of a design was prepared by what looks like an apprentice and then a final version of the very same design by the master engraver thereafter. So, it is very unlikely that the “proof” was in fact commissioned by postal authorities but simply reflects another plate version of the fake stamp.

Producing fake stamps that were either previously announced and then not produced or withdrawn is not new to Vietnamese philatelic circles. All the un-issued stamps of North Vietnam (Michel I to IV) exist in much greater numbers as fakes than the originals. There are crude re-prints from counterfeit plates of the South Central Vietnam Ho Chi Minh stamps and the same is true for the 1962 Weightlifter stamp (Michel Nr. 226). Counterfeit stamps that have been previously announced at one point or withdrawn shortly after issuance (so seen by none or few) are simply more credible in the market place; making the selling of the fakes easier.

Of course, no one can conclusively provide proof, that both versions of the 0.200kg rice stamp are 100% fake but were this a criminal case, the preponderance of evidence that they are, is simply so much greater that they represent proofs.

No philatelist, the author included, likes to find out that she/he was duped by spending money on a forgery. However, if all signs point to that, one just has to accept such an outcome. The alternative is to propagate a fake narrative so that other collectors may be duped as well and, to the author this is not acceptable. One’s integrity is much more important than losing a few hundred Dollars.

If you have information that may shed more light on this issue, please feel free to write to the author.

[1] Information provided by SICP member Frank Duering, who purchased most of Klewitz’collection after his death 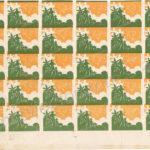 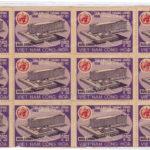