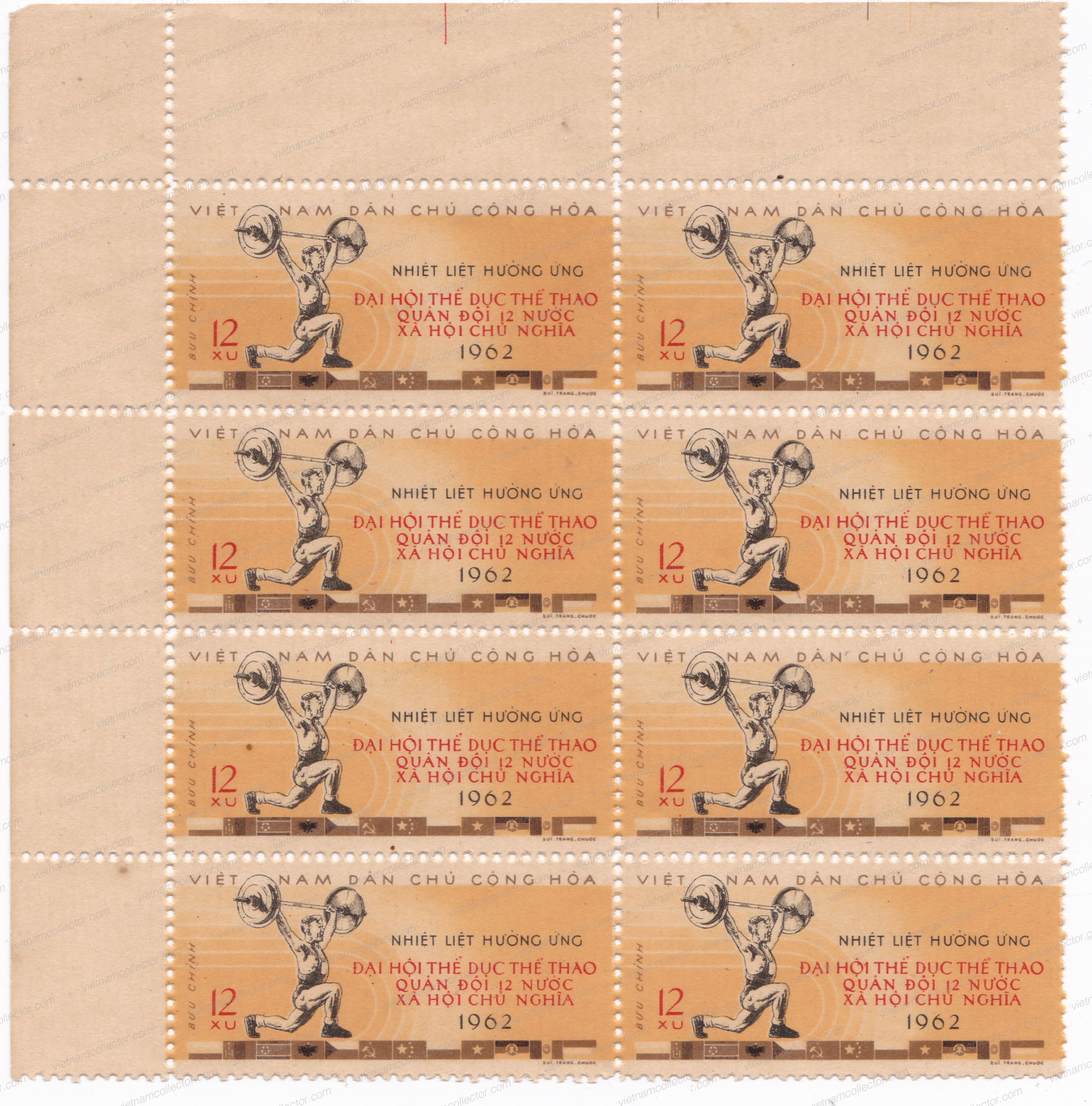 North Vietnam, 2.Summer Spakardiade of the Armees, September 1st, 1962, Michel Nr. 226. On September 1, 1962, North Vietnam issued a stamp to commemorate the second summer Spartakiad of the armies in Prague, Czechoslovakia. The stamp featured a black and white drawing of a weight lifter in front of a stadium outline.[1] The stamp was withdrawn from sale two months later as the design created political concerns, but it remained valid for postage thereafter.[2]

The idea of the Spartakiad was born out of the German labor and sports movement but was ultimately picked up by the Soviet Union to create an Easter Bloc counterweight to the Olympic Games that the U.S.S.R. did not participate in until after World War II. Spartakiad borrows its name from the Roman slave Spartacus who rebelled against Roman authorities. The Spartakiad was an international sports event, the first one of which was held in 1928 in Moscow and it involved eighteen communist countries. Further international events were held in Oslo (1928), Berlin (1931) and Oslo 1936. In 1952, the Soviet Union joined the Olympic Games and therefore the international events ceased. They persisted however on a national stage in various Eastern Bloc countries but became more of a public event in which a great portion of the population participated. Every citizen could participate and some groups (i.e. pupils and members of the armed forces) were actually mandated to participate.[3] The first Spartakiad in Czechoslovakia was held in 1955 to celebrate the liberation of the country by the U.S.S.R in 1945. The venue was the Strahov stadium in Prague. Wikipedia reports that the event was held every five years. The spartakiad scheduled for 1970 was canceled because of the “Prague Spring”, an anti-communist uprising.[4]

This background would suggest that Spartakiades were held in Prague in 1960 and 1965 but not in 1962. This begs the question as to why North Vietnam issued a stamp that honored these games in 1962. Was the stamp’s subject simply an error that then led to its recall? The author thinks not. While no direct information about the 1962 event in Prague could be found, it must have been held. Clearly, this was not the large mass domestic gymnastics event mentioned above but a more limited international event that only involved participants from the armed forces. Evidence for that can be found on some stamps issued by Czechoslovakia on July 20th, 1962. The host country released four stamps commemorating the 2nd Military Spartacist Games. [5] So, why then was the stamp withdrawn? The likely cause was simply poor design. The orange-brown background color of the stamp obscures a number of flags of participating countries at the bottom of the stamp and so makes it difficult to recognize them. Also, the fact that the weight-lifter appears to tread on parts of four flags may not have amused officials from these countries. The stamp website “Withdrawn” also mentions that North Korea withdrew from the event and did not participate.[6] It just happens, that the weight-lifter does tread on the North Korean flag. So, even back in 1962 it must have been a challenge to please the North Koreans diplomatically.

Since the stamp was in fact released at the post office, it is not extremely rare (like the unissued Michel I to IV) but is a lot less numerous than other stamps issued in the 1960s in North Vietnam. Scott wrongly asserts that the stamp was not released and values it at $200 (presumably for mint only). This, to the author, is a bit excessive. Michel (as well as the Vietnam Postage Stamp Catalogue 1945-2005) does show the release date of the stamp and values a mint copy at €80 (about $100 at current exchange rates). Larger mint units (Exhibit 1) or even a complete sheet are very rare and should be valued higher. The paper the stamp was printed on shows lines that are similar to a water-mark”. Depending on how the paper was inserted into the printer the lines are either horizontal (Michel Nr. 226x) or vertical (Michel Nr. 226y). There is no price differential for both versions. 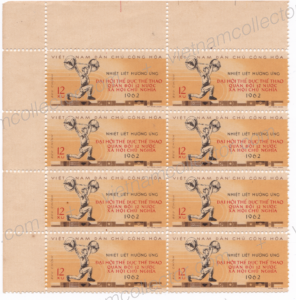 The fact that the stamp was withdrawn from sale clearly limited its availability and probably caught collectors by surprise.  The typical reaction of stamp collectors when a stamp is considered rare is always to hold on to it and not use it. This means that finding used copies of the stamp (Exhibit 2) is very difficult. Michel therefore values a used copy at €200 (U.S. $250) and even that may be too low given its general lack of availability. 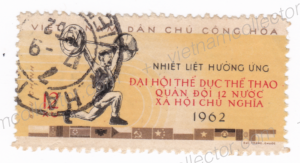 Of course, finding this stamp on cover is even more of a challenge. The most likely version will be a First Date Cover (Exhibit 3). A small number of them were prepared and sometimes come onto the market. They usually trade at around $500. A genuine, postally used sample is virtually impossible to find. The author possesses a cover that appears to be locally used in Hanoi but it is possible that the sender’s and recipient’s address were simply added later on (Exhibit 4). There is a verifiable postally used cover in the Klewitz collection where the stamp was used in a mailing to him. 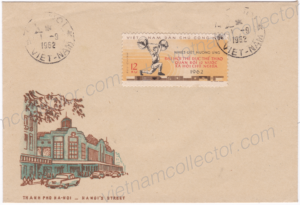 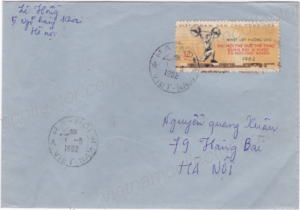 Here is one of only two international letters the editor has ever seen which carries the weight lifter stamp stamp. It was mailed in late September, 1962 from Hanoi to Fulda, West Germany. It is actually under-franked for a registered letter to West Germany (Tariff of 1.1 Dong) but the clever sender wrote “RDA” at the bottom of the address which stood for “East Germany”. He therefore apparently duped the postal clerk into accepting the 12 xu rate to East Germany. Since the letter was mailed registered (registration cost 60 xu) the letter should have at least carried 72 xu but math may not have been the strength of the postal clerk. Only 70 xu were attached but no postage due was ever indicated. Extremely rare postal used letter with this iconic stamp. 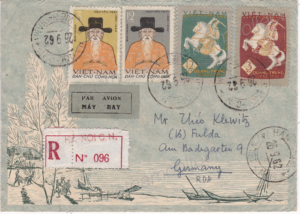 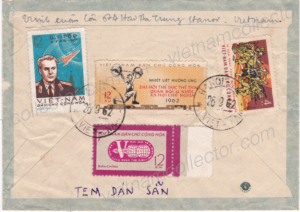 The other international mailing is from the Government owned stamp dealer Xunhasaba who used the weightlifter stamp on a medium sized envelope to a stamp dealer/collector in England. England was still a scarce destination in the early 1960’s. The envelope carries an overall postage of 18xu. Red propaganda hand stamp on front. 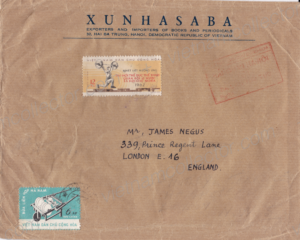 It should be mentioned that  crude forgeries of this stamp do exist. They are fairly easy to spot as the drawing of the weight-lifter is a lot more crude on the forgeries than on the original. Also, the background color is more yellowish than on the originals (which are more brownish) and the accents above the letters E”, “A”, “U” and “O” in the country name “Viet Nam Dan Chu Cong Hoa” are much more subtle in the originals than in the forgery. The forgery is often offered imperforated as an un-issued trial print. Interestingly enough the forgery here is harder to find than the original stamp. The forgery is produced by the letter press method and not in offset print. 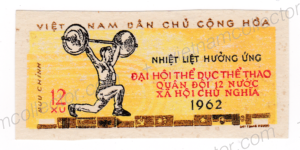 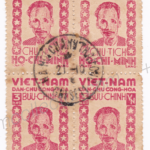