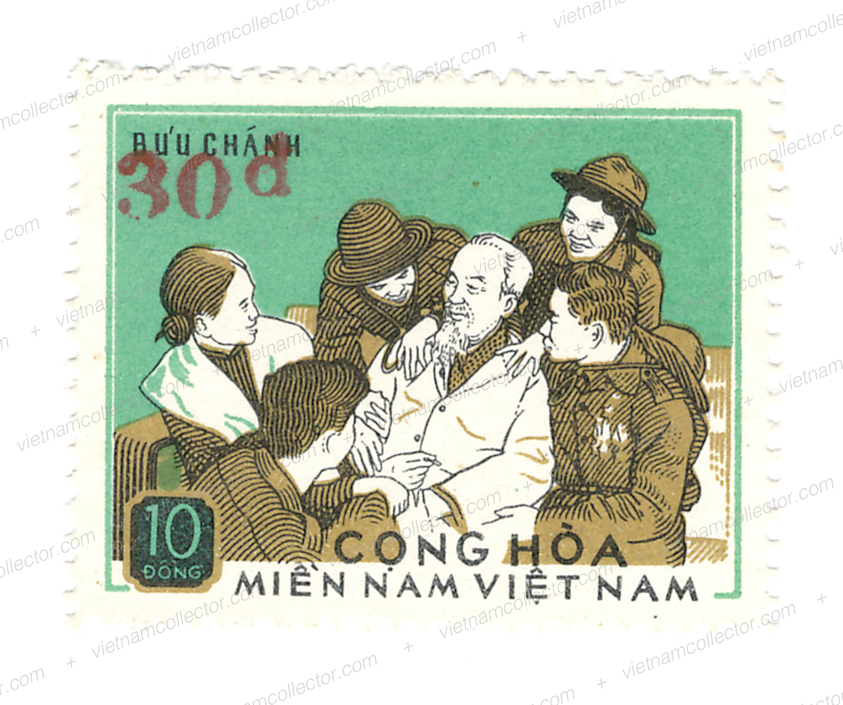 National Liberation Front, 5th Founding Anniversary of the Provisional Revolutionary Government of the Republic of South Vietnam, June 6th, 1974, Michel Nr. NLF 50-51; Two stamps in the nominals of 10D and 20D (in the currency of the South Vietnamese Regime) were issued in perforation 11.0. Again, the nominals are baffling. The standard domestic letter rate in the South was already 25 Dong at that time and was slated to go up to 30 Dong in the middle of 1975, so the two nominals were not very practical for actual use in liberated areas. The only reason the editor can think that these particular nominals were selected is that the NLF Regime initially had the intention to demonstrate a benefit to the population in the liberated areas by lowering the postal rate from 25D to 10D but, if this was the plan, it was never followed through. While no postally used samples of the un-overprinted stamps exist prior to the “Fall of Saigon” ,at the end of April in 1975, all stamps used thereafter reflect overprints of 25D and 30D for a standard letter. The surcharge for registration amounted to 60D.

Here is the cancelled to order set (un-overprinted). 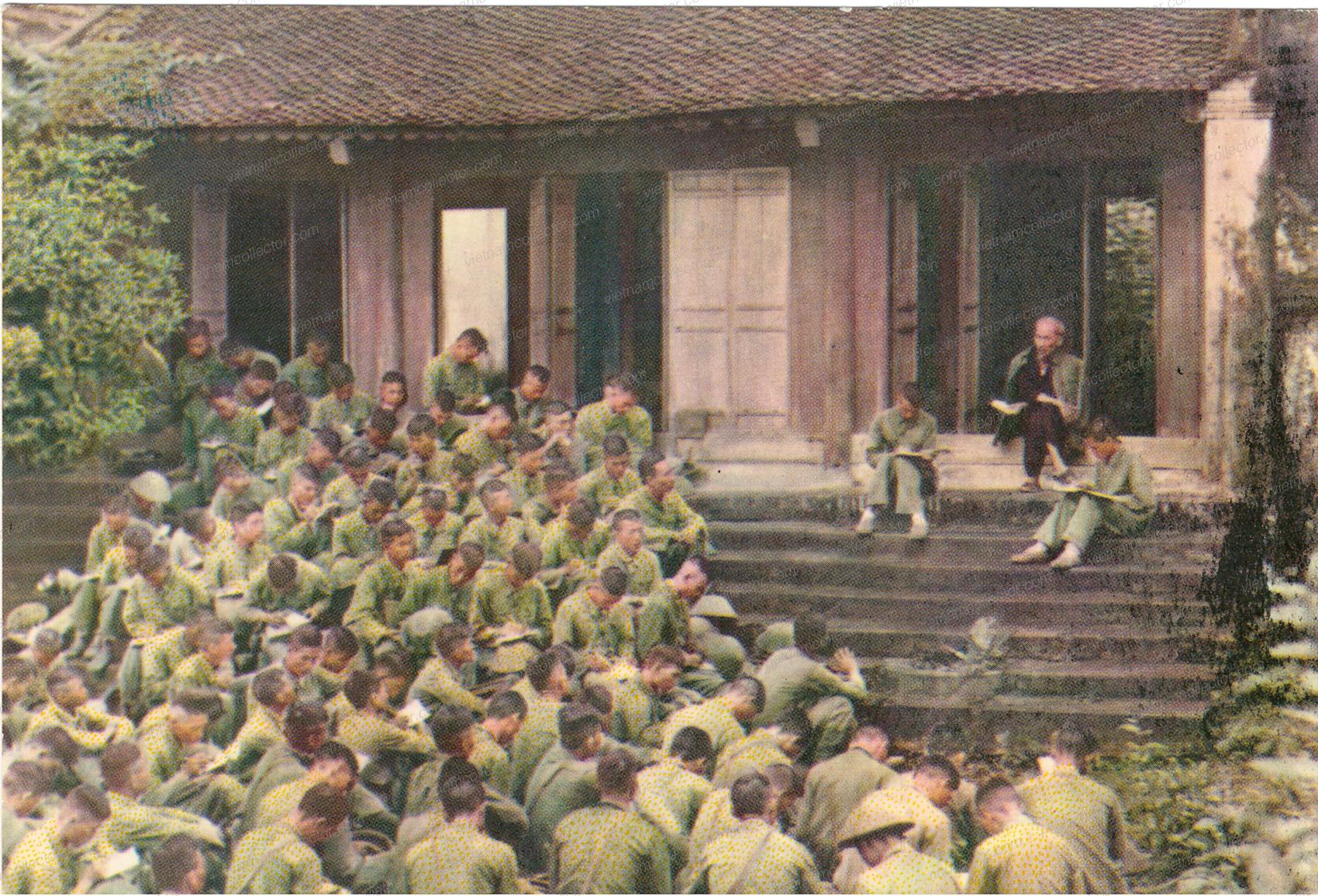 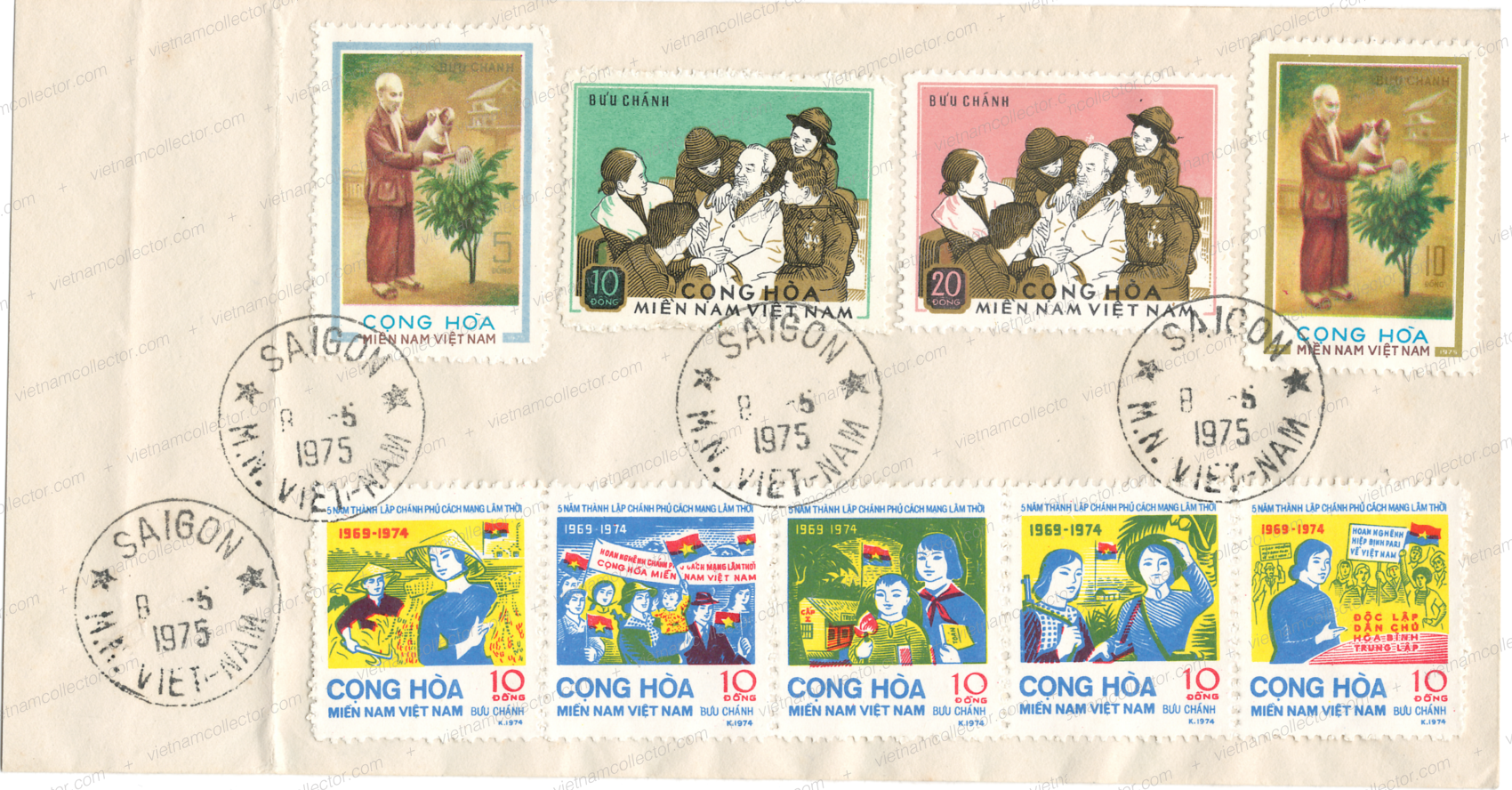 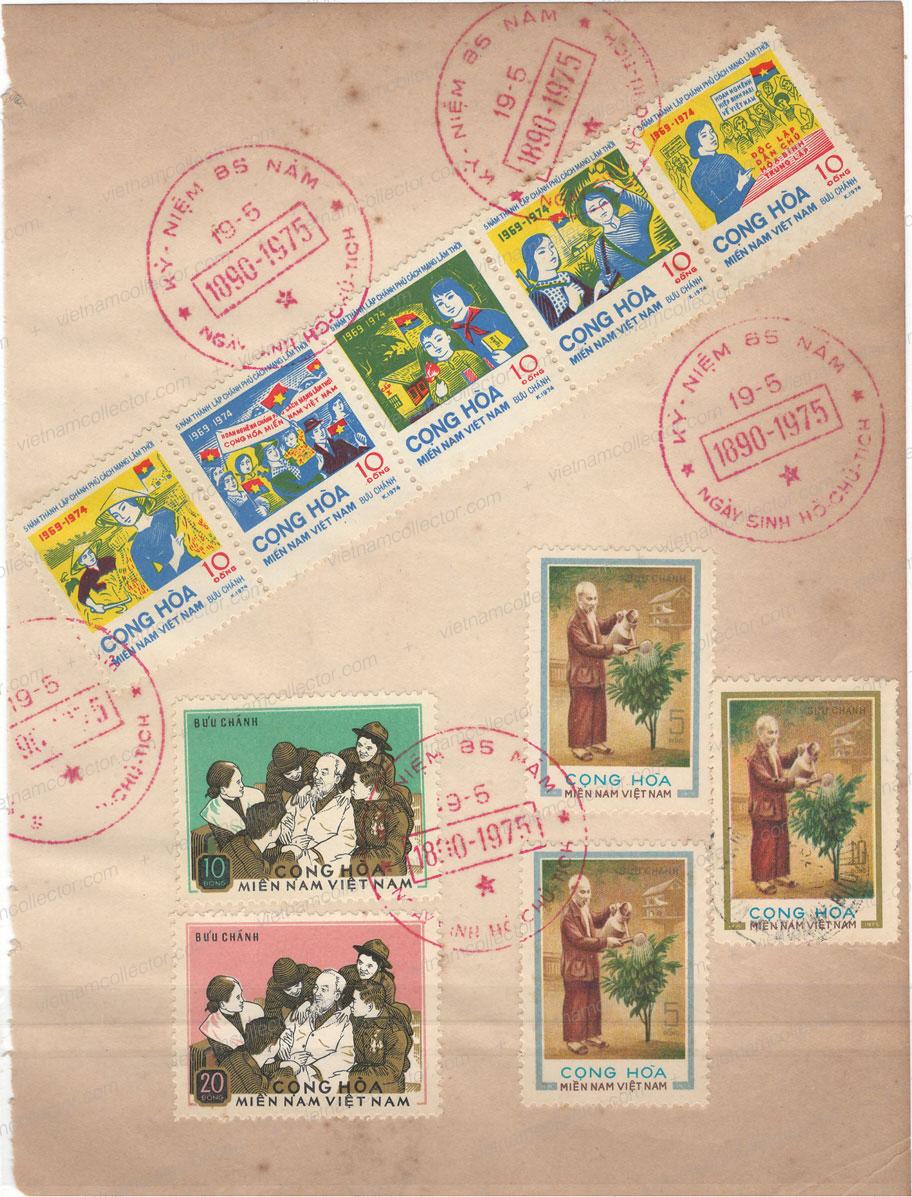 Here is a local letter with a multiple franking of the 10D value sent from Saigon to Hanoi on May 23rd, 1975 so shortly after the “Fall of Saigon”. While the cancel already has the “M.N” inserted it still shows the old city name that shortly after would  be changed to Ho Chi Minh City. June 3rd, 1975 transit cancel on the reverse. Mixed franking of the the 10D value (2) issued in February 1975 and the 30D value issued in September of 1975 paying an overall postage of 50D on a letter sent from Da-Nang to Ho Chi Minh City in September of 1976. The stamps with nominals in South Vietnamese Dongs were devalued by 500:1 in April of 1976 so the postage here amounted to 10 North Vietnamese Xu. Given that the standard letter rate was already 12 xu at the time the letter was sent it was under-paid but did not receive a postage due notification. Ho Chi Minh City machine arrival cancel on the reverse. Very rare mixed currency franking from July of 1976 of the 10D value HCM among soldiers and the 6xu National Assembly stamp (3) on a registered letter sent inside Ho Chi Minh City. The 10D stamp in NLF currency was devalued by 500:1 in April of 1976 when the currencies of the North and the South were harmonized. The means the 10D stamp was only worth 2xu at the time of mailing. Together with the 18xu of new currency stamps the overall franking hence amounted to 20xu. Letters mailed within the city were discounted 50% and only cost 6xu. This suggests that the registration fee amounted to 14xu. Registered letters were very rare shortly after the war as very few people could afford the additional cost for the registration service. Machine arrival cancel on the reverse. 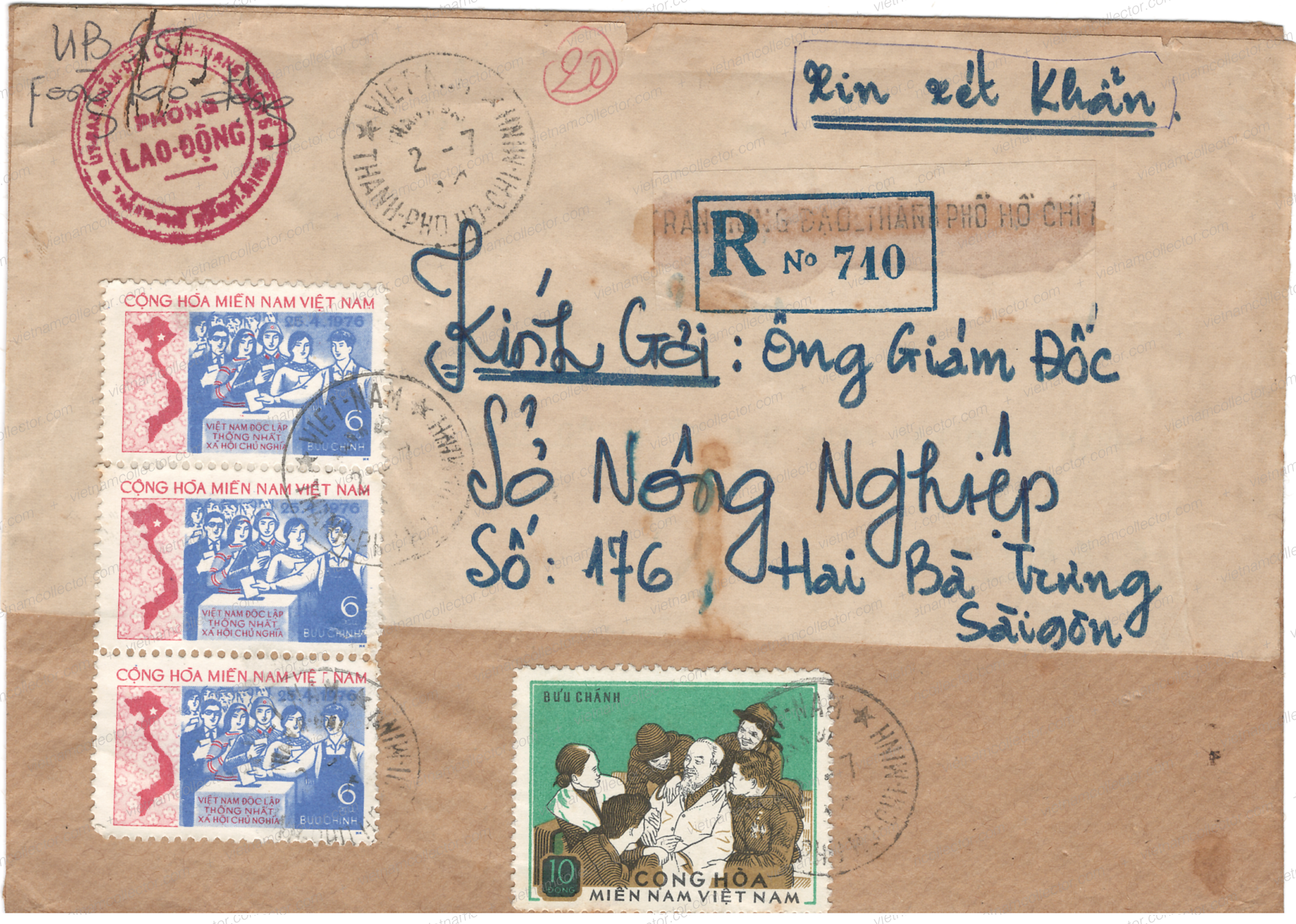 Rare mixed currency franking of the 10D HCM among soldiers stamp along with the 6xu NLF National Assembly stamp and the 1Dong North Vietnam Air Defense and Communist Party stamps. The 10D NLF stamp in old currency was devalued by 500:1 in April of 1976 so was only worth 4xu at the time of mailing. The overall postage hence amounted to 1.46D. The letter was sent internationally to Marseille, France in December of 1976 which was now possible as the new regime had been accepted by the international community and hence was part of the UPU. 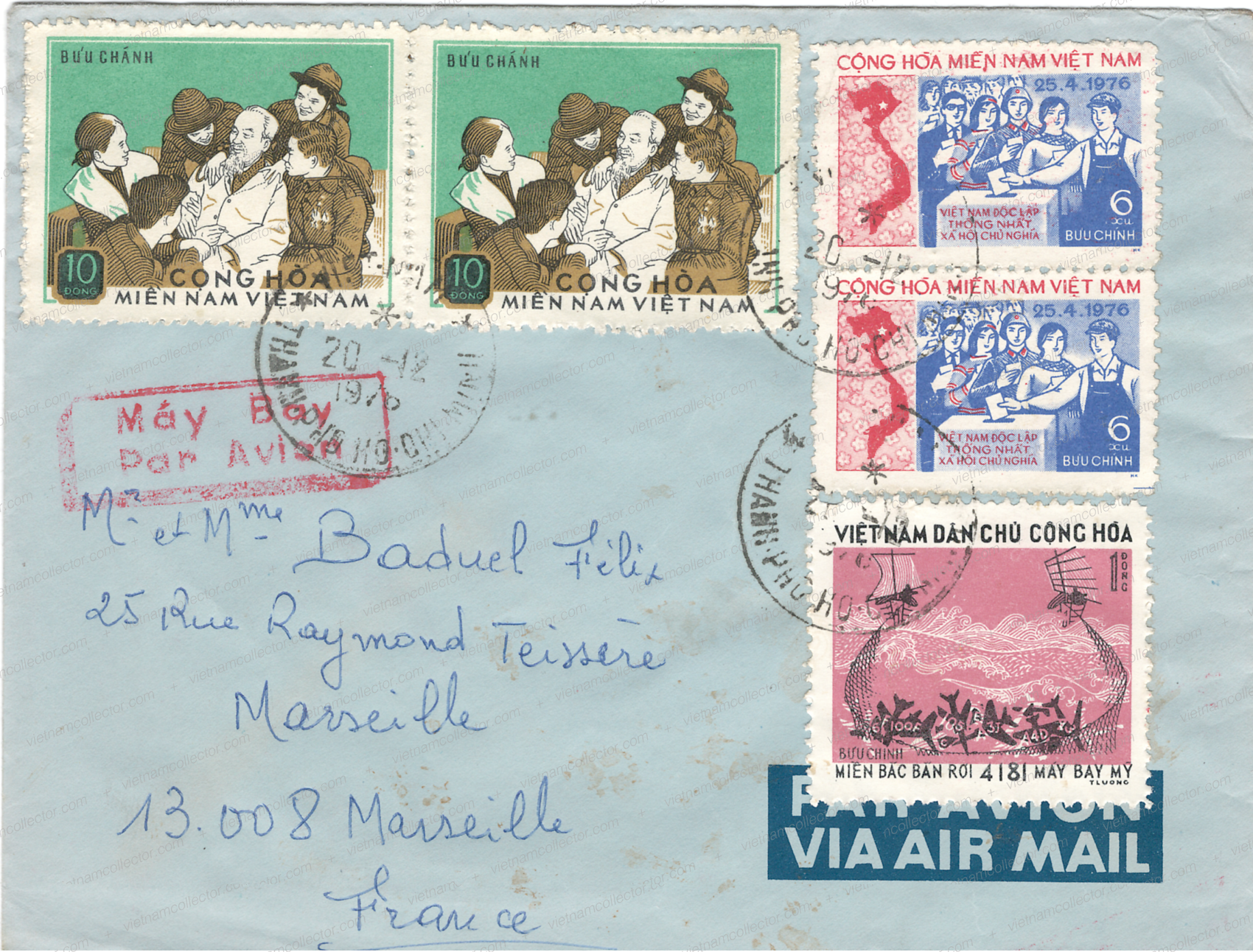 Here is the 30D overprint in black.

Detail scan of the overprint.

Here is the overprint in red.

Detailed scan of the overprint

Numerous forged overprints exist, so make sure that the shape is identical to the stamps shown here.

Michel reports that genuine postal history with these overprinted stamps exists between October of 1974 and the beginning of 1976, after which the shortage of stamps was alleviated. It is very rare. Many of the letters that are offered in the market place and even some of the letters featured in Ta Phi Long’s book “Some features of Postal History in the Period of revolutionary South Vietnam”, are letters that were made up for collectors after the end of the war. They either show genuine postal cancels of the old South Vietnamese Regime (i.e. without the Mien Nam “M.N.” inscription, which were no longer used after the war) that fell in the hands of forgers or they are using correct “Mien Nam” cancels but they letters lack transit and arrival cancels that were standard at the time. This suggest these letters only represent favor cancels provided for a small “fee” by postal clerks. So be extremely wary when purchasing such letters. 2nd Anniversary of the Proclamation of the Republic of South Vietnam