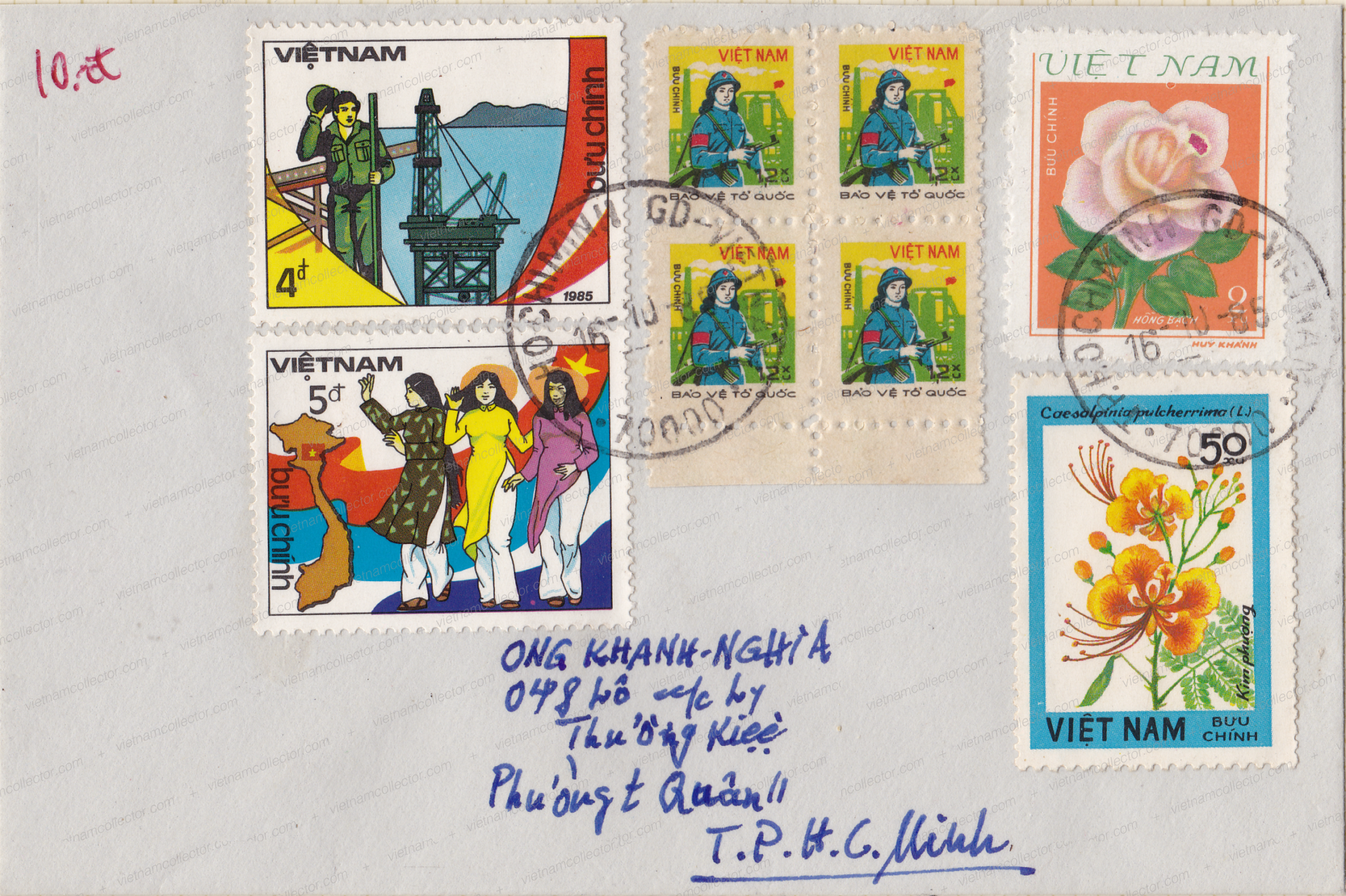 Unified Vietnam, Worker Militia, August, 1981, Michel Nr. A1178; The release of this 12 xu stamp is a bit of a mystery. Just by looking at the Michel catalogue number, which is a late addition and hence carries an “A” in front of the 1178 (Michel Nr. 1178 had already been assigned to the 1 Dong Bird stamp from 1981), it becomes clear that this stamp was not announced properly prior to release as other issues have been. Michel simply states that the stamp was issued in August of 1981 but the editor believes that this is not correct. The late SICP member Theo Klewitz had multiple contacts in Vietnam that sent him letters with all the stamps that postal authorities issued. There is no such letter in Klewitz’ expansive collection from around August of 1981. This means Klewitz’ contacts had no notice that this stamp was going to be issued. Neither did Michel as it was basically Klewitz that informed them about all new issues. In the SICP Journal Nr. 75 from January/February 1986 Klewitz speculated that the stamp must have all been used up locally without philatelists outside of Vietnam noticing. Today we know that this couldn’t have been true as a large quantity of CTO stamps and a number of mint stamps were sold by the Vietnamese philatelic agency later on. 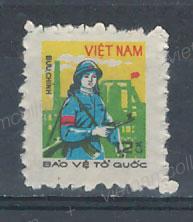 Here is a block of six mint stamps from the top margin: 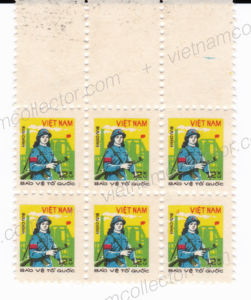 Also the mint version of the stamp carries an unusually high catalogue value. Michel still lists it with €20 which is very high for a mint 12 xu stamp from the period. The editor believes that this stamp, while already printed, was not released in 1981 as the standard domestic letter rate had just gone up from 12 xu to 30 xu in the middle of 1981 and hence the stamp was not particularly useful anymore. Based on the scant evidence available, it appears that in the middle of 1985 postal authorities decided to release the stamp after all (mostly in cancelled to order condition) into the collector market. In that condition the stamp is plentiful and cheap. Mint stamps were probably released very slowly or at a later date which would explain why Michel put its value at the very high €20 where it still stands today. Today, both conditions of the stamp are easily available in the marketplace. While mint stamps are still more scare than cancelled to order stamps it is not a problem to buy a mint one for less then €3, so the catalogue value should be decreased accordingly.

These stamps were printed in an unusual confection of 250 stamps that was principally made up of 16 rows of 16 stamps (=256 stamps). In order to make the calculation for postal workers more easy the Tran Phu Printing works removed the first six cliches of the stamp in the top row resulting in a the total of 250 stamp. The first six fields in each sheet were simply left unprinted (= white). These standard blank fields together with the adjoining stamps are often offered as an error but this is simply not the case. These sheets are normal. There are errors however, where the six cliches were only removed partially and where the red printing phase is still visible. Here is a piece from the top left of the sheet that shows four fields with the red color only adjoined by four normal stamps. 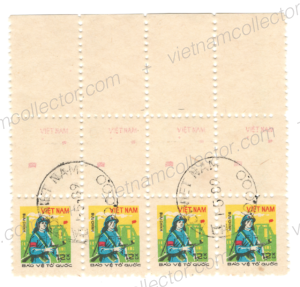 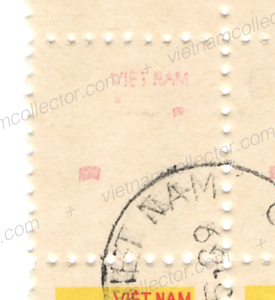 Similarly errors are known on which the yellow printing on the first six fields is visible. Below is a block sixteen (of which the top left six fields should have been empty) that shows only the yellow color. 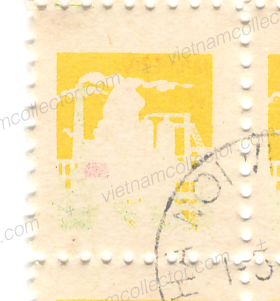 For the past 10 years the editor had tried to locate this stamp on cover, however, not a single First Day Cover or postally used letter has ever appeared in the market place! The same is true for postally used specimens. If one parallels this with the military free frank (Michel Nr. M38) that shows the same image, but has slightly different colors and was issued in April of 1982 without a nominal value, that is highly unusual. While Michel Nr. M38 is not common on postally used cover it can be easily obtained on cover or postally used with a bit of patience.

Here is a mint pair of the military free frank: 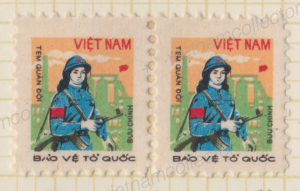 The only reason that Michel Nr. A1178 cannot be found on cover or postally used has to be that it was basically missed by the entire philatelic community and the Vietnamese public and that would only be the case if the stamp simply was not issued in 1981. When then mint and used stamps were sold to collectors in 1985 the stamp was simply collected in this fashion and not used postally anymore. By late 1985 the standard domestic letter rate apparently had gone up to 10 Dong caused by rapid inflation which meant that the 12 xu Militia stamp simply was no longer practical.

The Klewitz collection, however, did contain two local letters that feature the stamp. The first one was mailed locally in October of 1985 within Ho Chi Minh City and it carries a block of four of the 12 xu Miltia stamp among other NVN stamps for an overall postage of 10 Dong. 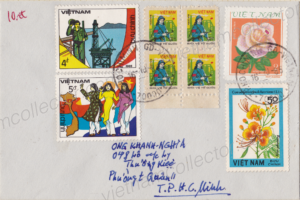 The second letter, also mailed inside Ho Chi Minh City,  was mailed in November of 1985 and it carries one of the 12 xu Militia stamp plus the military free frank with the same image (that was devoid of any nominal) plus other NVN stamps. The overall franking of this letter amounted to 10.04 Dong so a fraction above the required tariff. The free frank was counted with its implied nominal value of 12 xu. 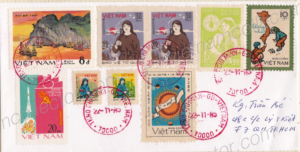 Based on the colorful frankings both letters appear to be made by a collector that was intent to document this stamp on postally used cover. These are the only letters with this stamp the editor has ever seen, which would make them modern day rarities.

The editor is curious if other collectors have a First Day Cover or postally used cover of this stamp in their collection. If you do, please contact the editor via the contact feature. 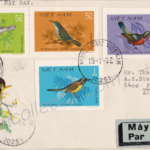 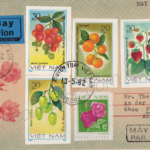