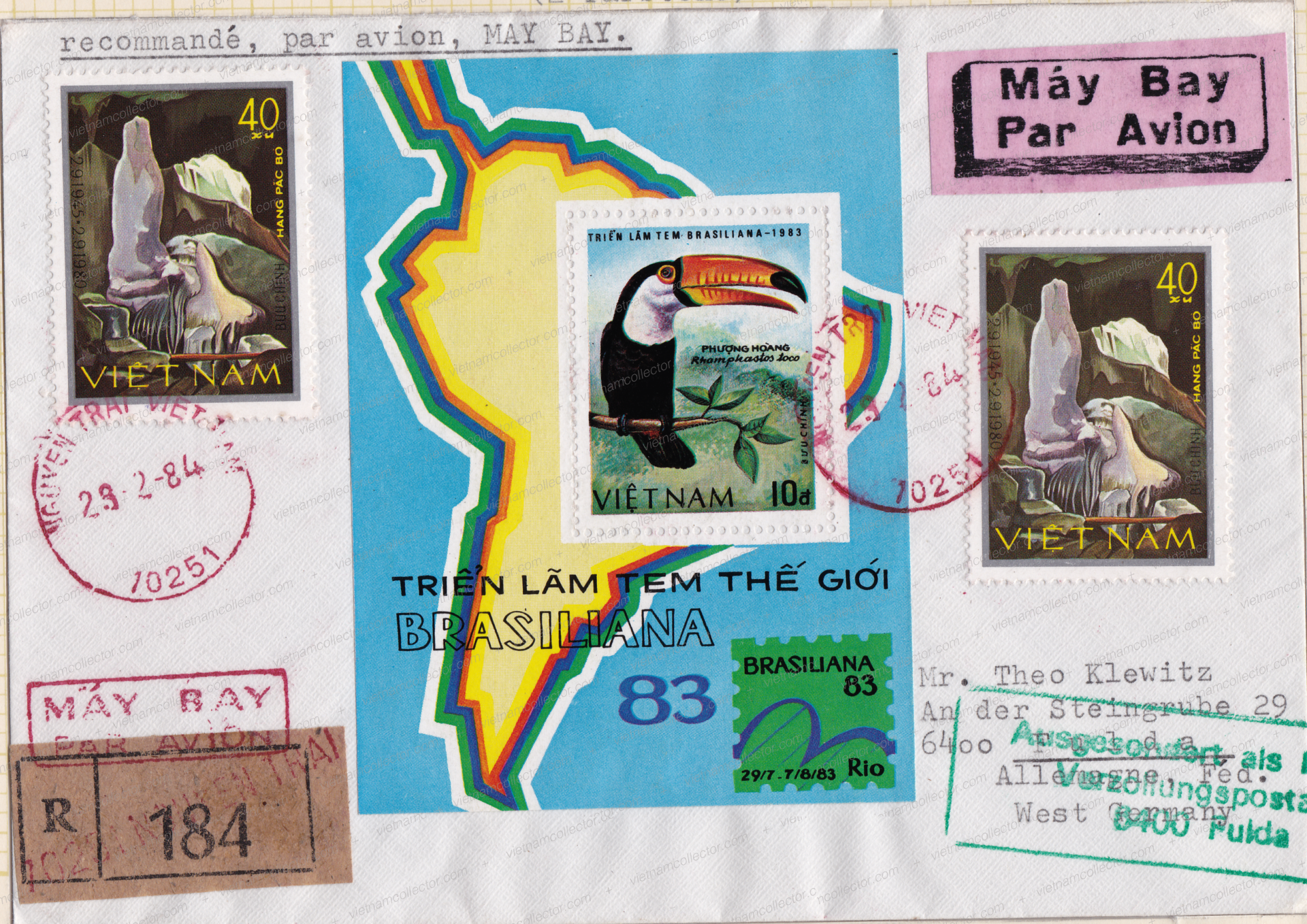 Unified Vietnam, International Stamp Exhibition Brasiliana 83, Rio de Janeiro, July 20th, 1983, Michel Nr. 1352, Block 21; A single 10D souvenir sheet was issued in honor of the exhibition. The souvenir sheet was perforated 13. Klewitz also reported that the “Protected Bird” stamp set that was initially released in April of 1977 was re-issued in slightly different frame colors as the original release. The editor has compared the two sets in the Klewitz collection but could not verify his statement. The frame colors look the same to him. The souvenir sheet comes in two different blue base colors. Here are the light blue and blue versions that can be found. 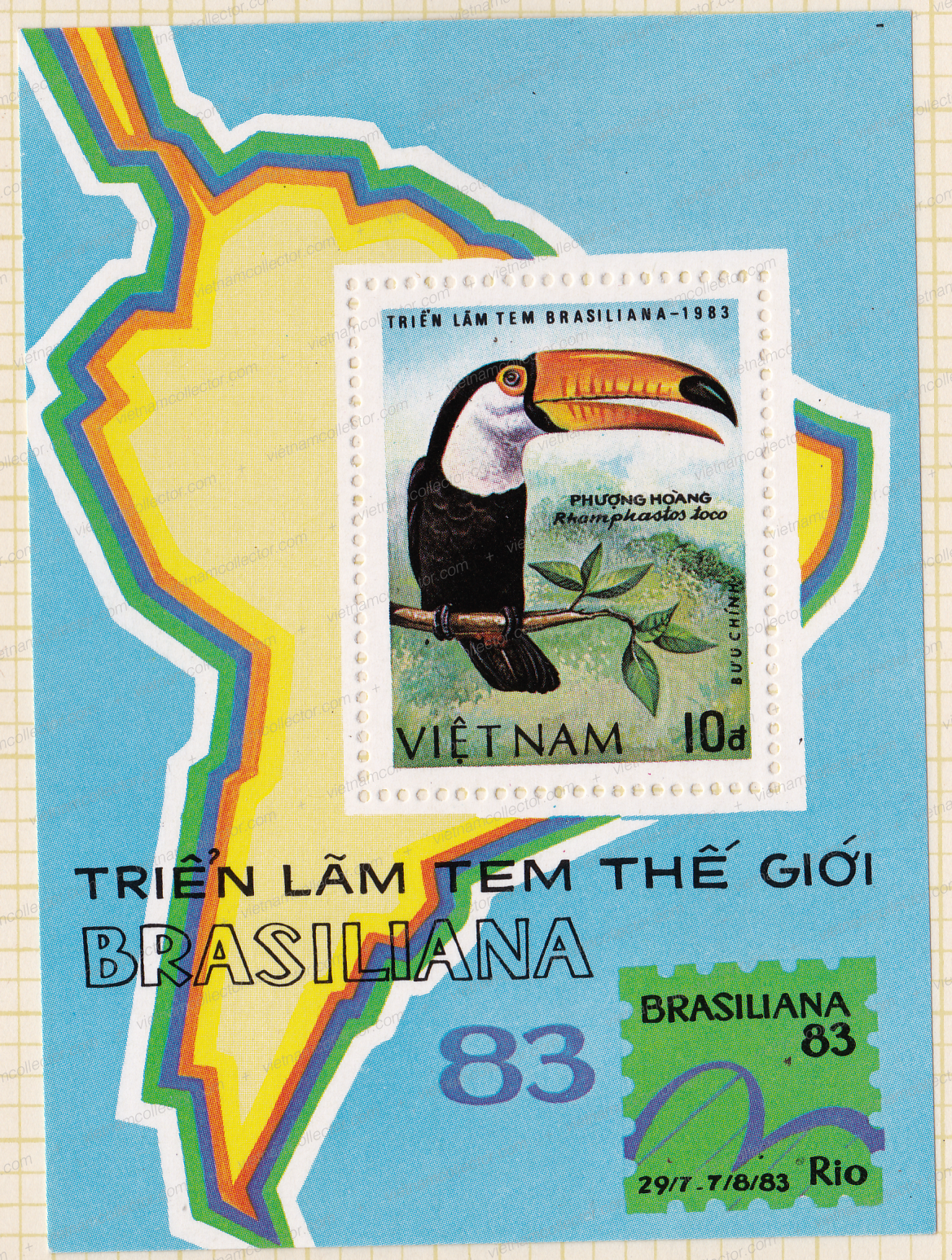 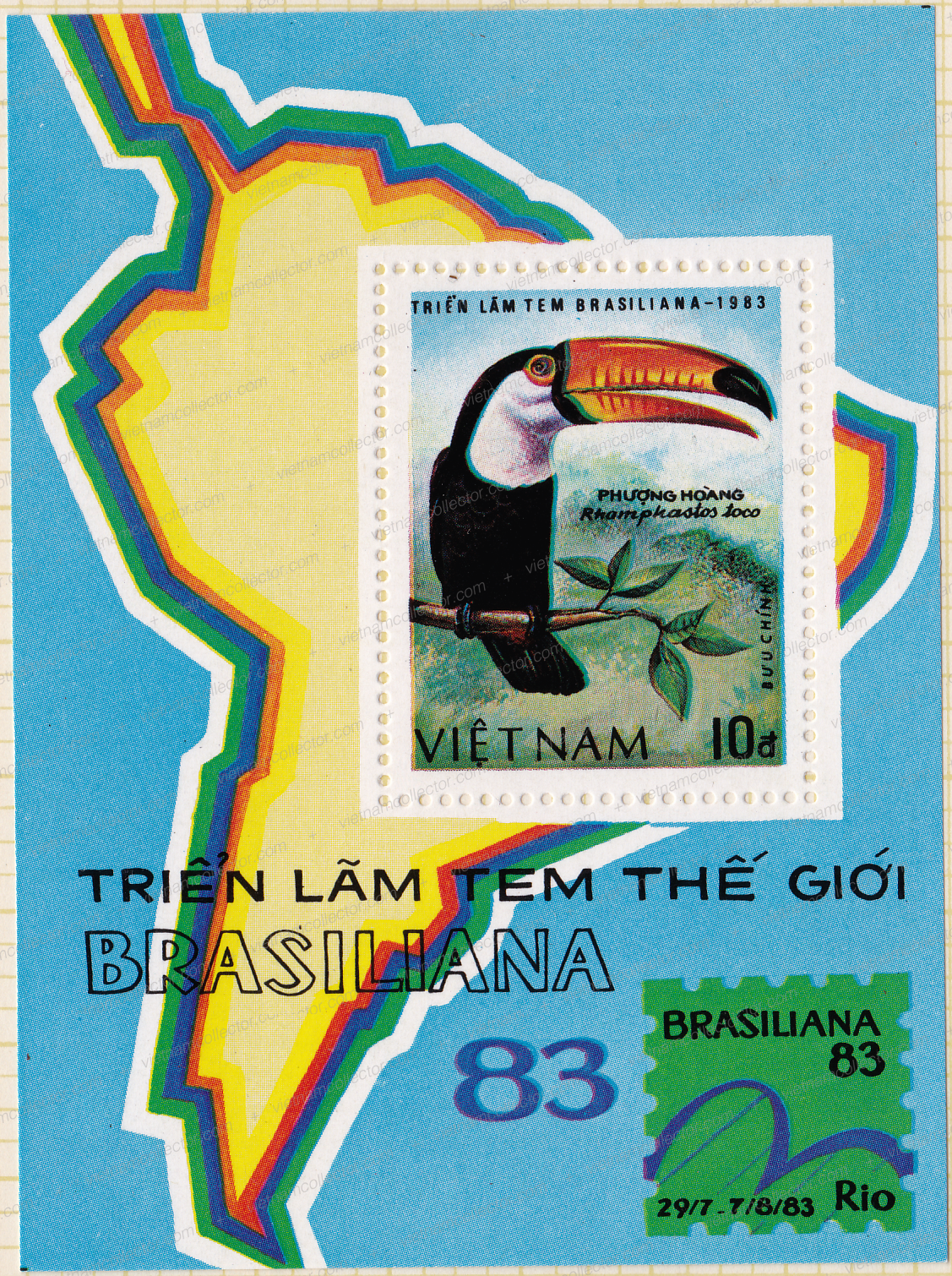 Registered air mail letter featuring the entire perforated Protected Birds stamp set that was re-issued along with the souvenir sheet for the international stamp exhibition in Rio de Janeiro in 1983. Klewitz reports slightly different colors of the stamp frames on the re-issued set but the editor has not been able to confirm that. The frame colors look the same as on the original set. The letter also carries the imperforate 1D of the End of WW2 set. Imperforated stamps on postally used cover are very rare, The overall postage of the letter amounted to 41.47D (including the red free frank for 23xu).  Green Fulda custom cachet on front. 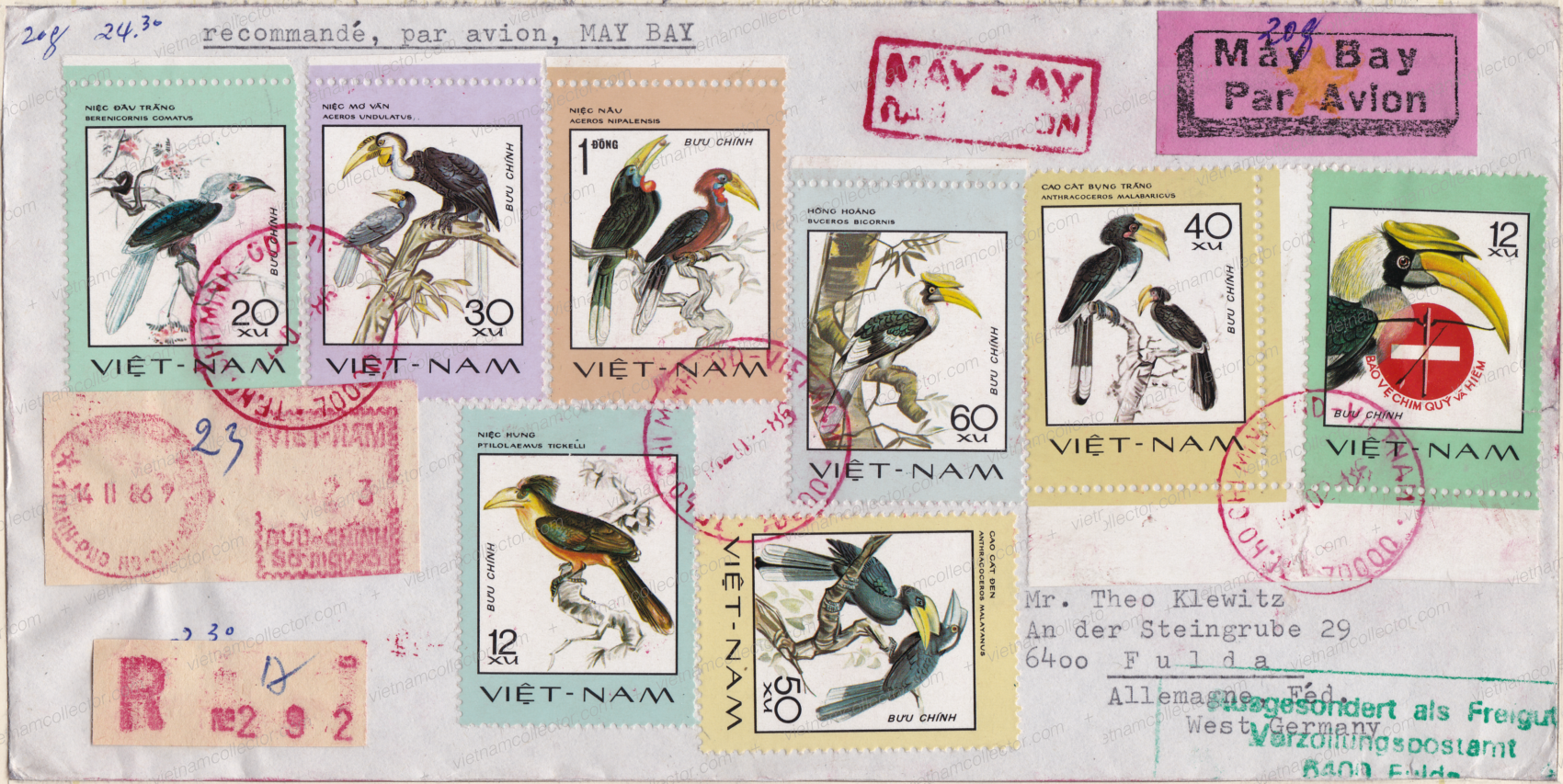 Registered air mail letter sent from Nguyen Trai to Klewitz in February of 1984. The letter carries the souvenir-sheet as well as some of the 35 Years Independence stamps for an overall postage of 19.46D (including the red free frank for 4.26D). Souvenir sheets on postally used cover are very rare. Green Fulda custom cachet on front. 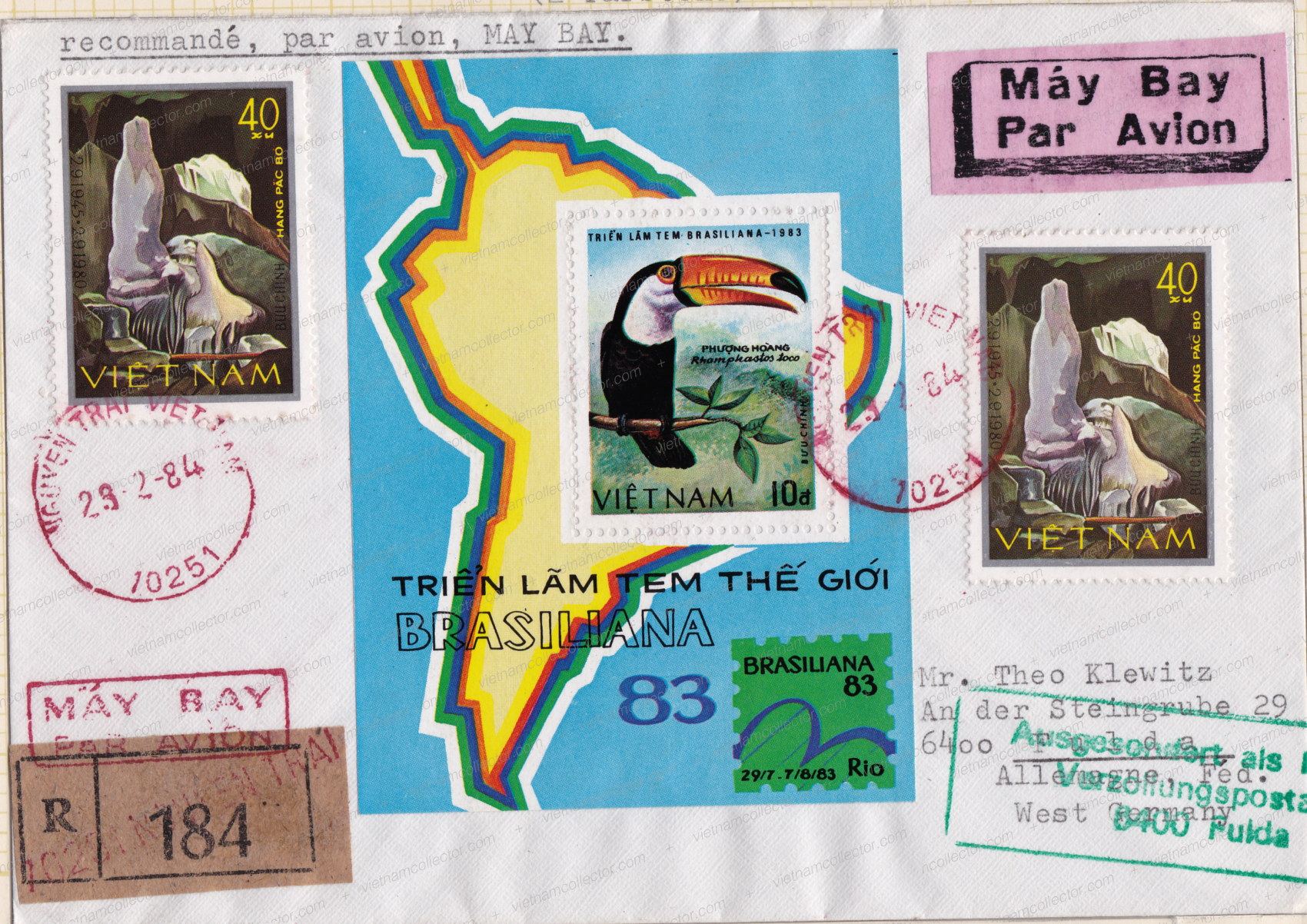