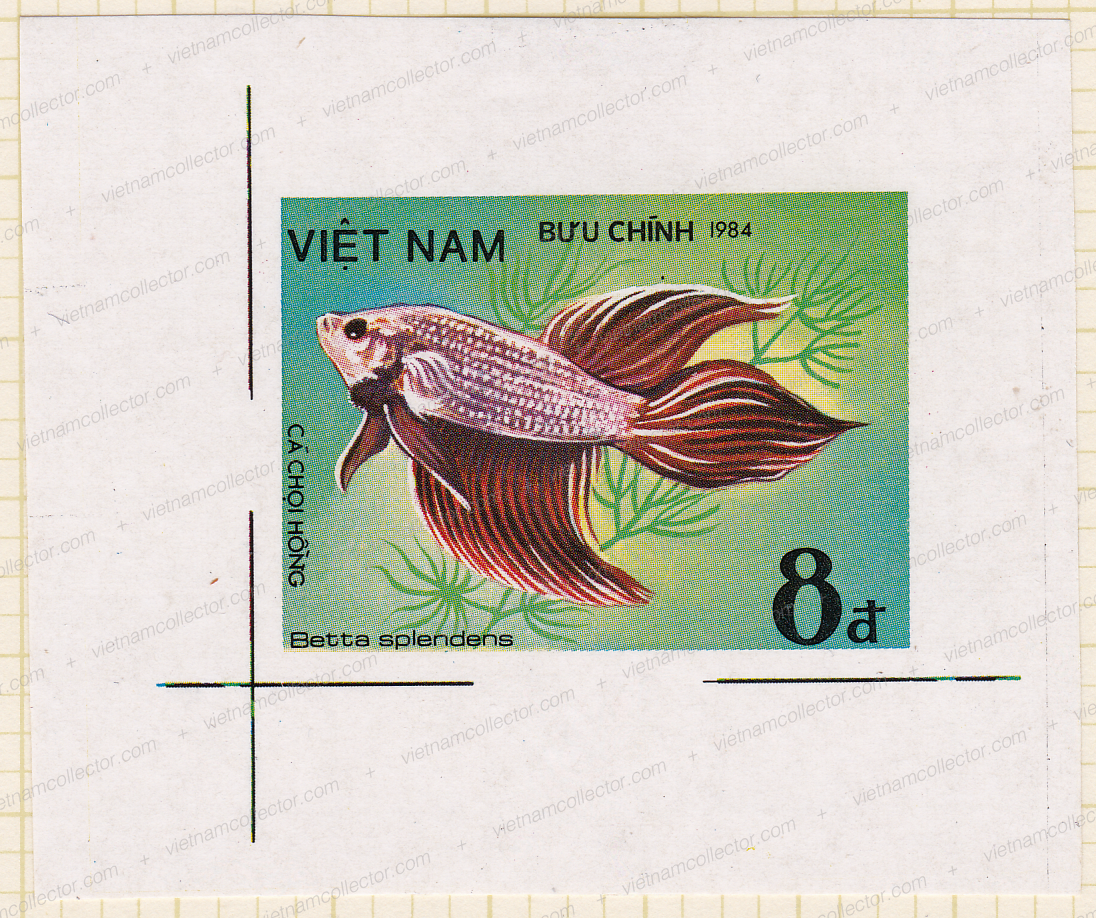 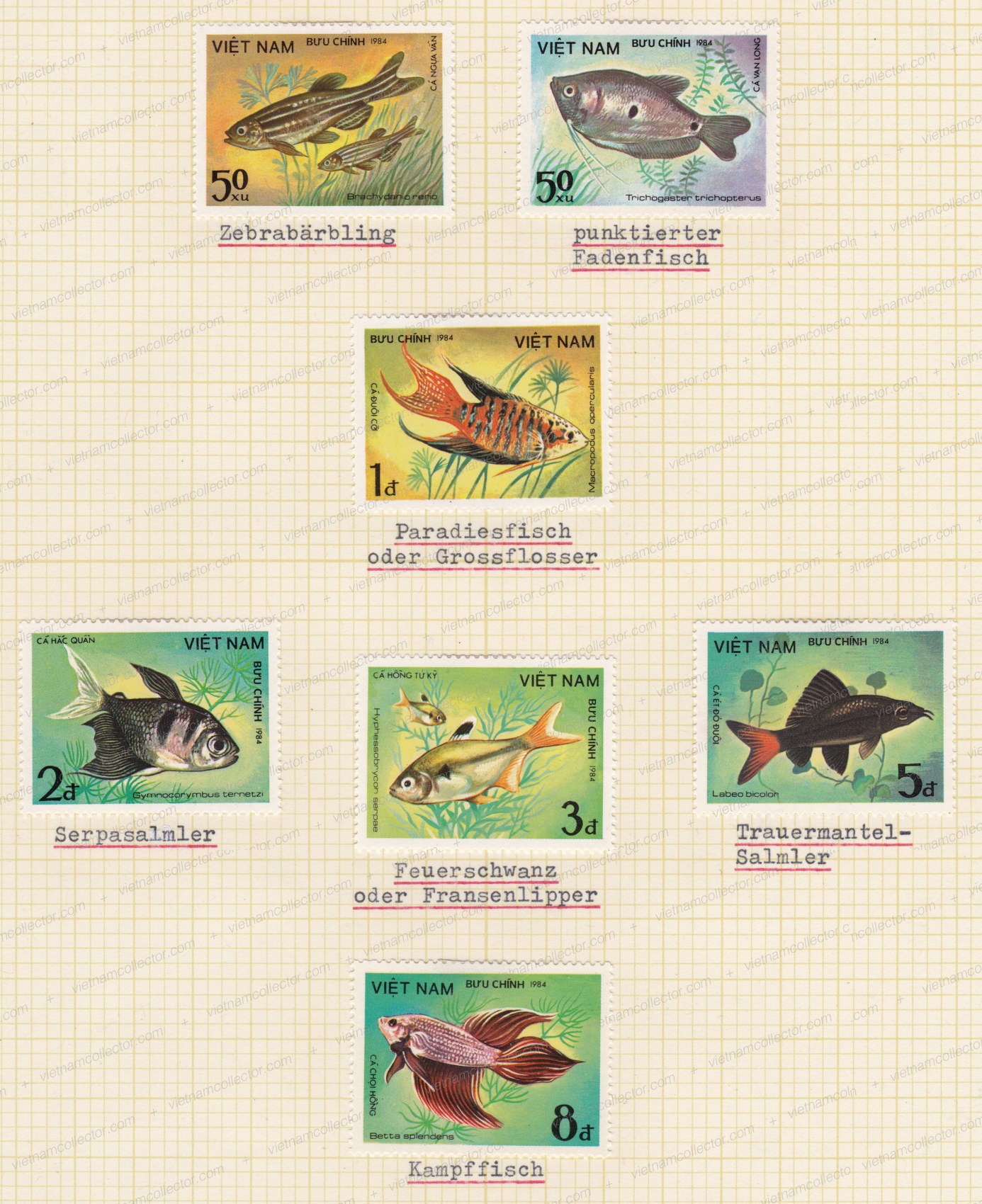 Here is the mint imperforate set 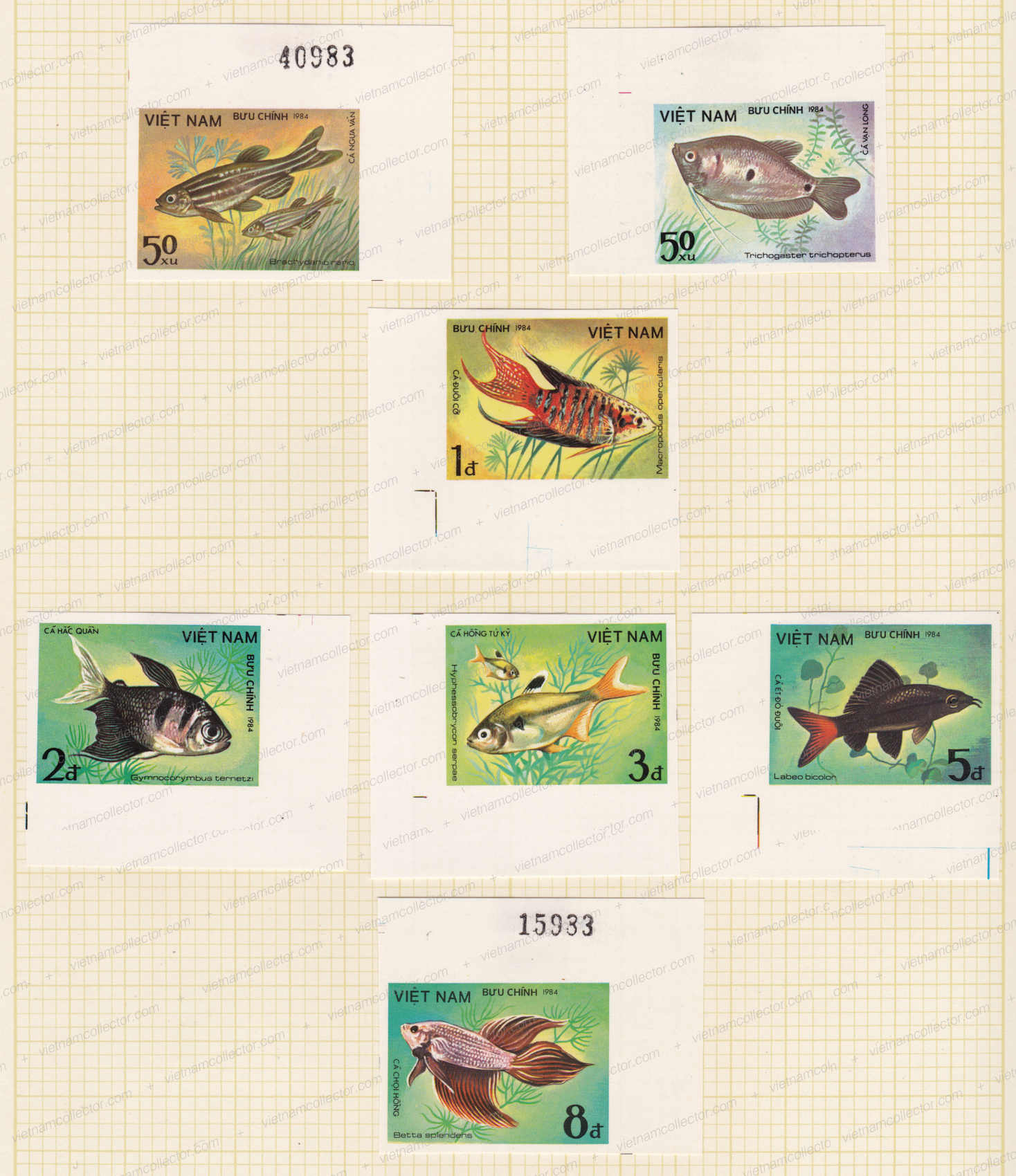 In addition to the stamps issued in large imperforate sheets this issue has also become known where each stamp is individually printed as imperforate trial proofs that were used to facilitate the postal decision making process. Very rare. 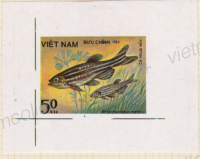 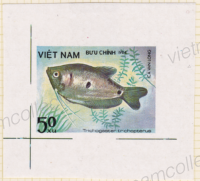 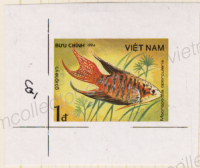 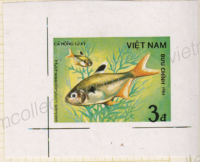 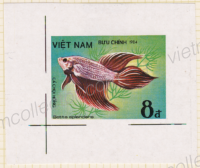 Here is a mint 50xu stamp that shows the plate error of “broken N in VIETNAM”. 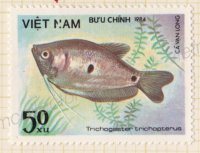 Mint stamp of the 2D value from the bottom left corner of the sheet that shows a faulty yellow color printing run that was  caused by a paper fold in the corner that was smoothed out for later print runs. 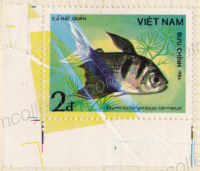 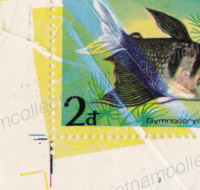 Mint copy of the 2D stamp with the plate error of “black dot in N of VIETNAM”. Registered air mail letter sent in December of 1986 from Ho Chi Minh City to Klewitz. The letter carries the entire perforated Fish set mostly with selvage on which the sheet count is printed plus other contemporary NVN stamps for an overall postage of 33.50D. The Dong was devalued by 10:1 on September 14th, 1985 and all the stamps on this cover were issued before that date. This means the postage in old Dong was only worth 3.35 new Dong (the red free frank is unfortunately illegible) at the time of mailing. Green Fulda custom cachet on front.

Registered air mail letter sent in October of 1986 as a mixed currency franking from Ho Chi Minh City to Klewitz. The letter carries the World Cup souvenir-sheet plus stamps from the Dam Construction, Hanoi Liberation, Dahlias, Reconstruction, Traditional Houses and Fish sets. Souvenir-Sheets on postally mused cover are very rare. The Hanoi Liberation, Fish and Dahlia stamps were still denominated in old Dong while all the other stamps were denominated in new Dong. The Vietnamese Government conducted a devaluation of the Dong on September 14th, 1985. This meant that all stamps issued prior to this date were only worth one tenth at the time of mailing. The overall postage hence amounted to  22.4 oD =2.24 nD. plus the stamps in new Dong (33D)  for 35.24 nD. Green Fulda custom cachet on front. 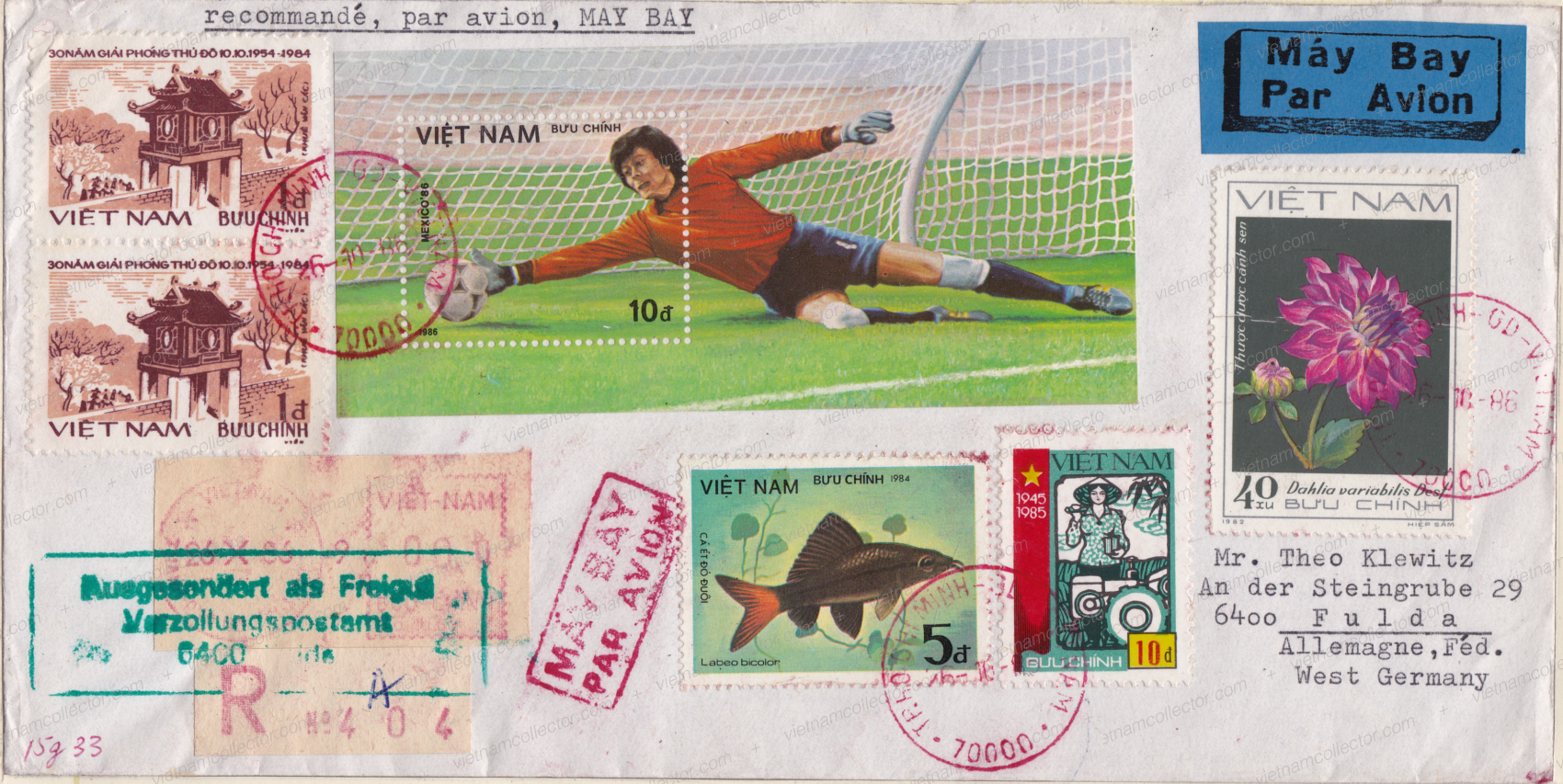 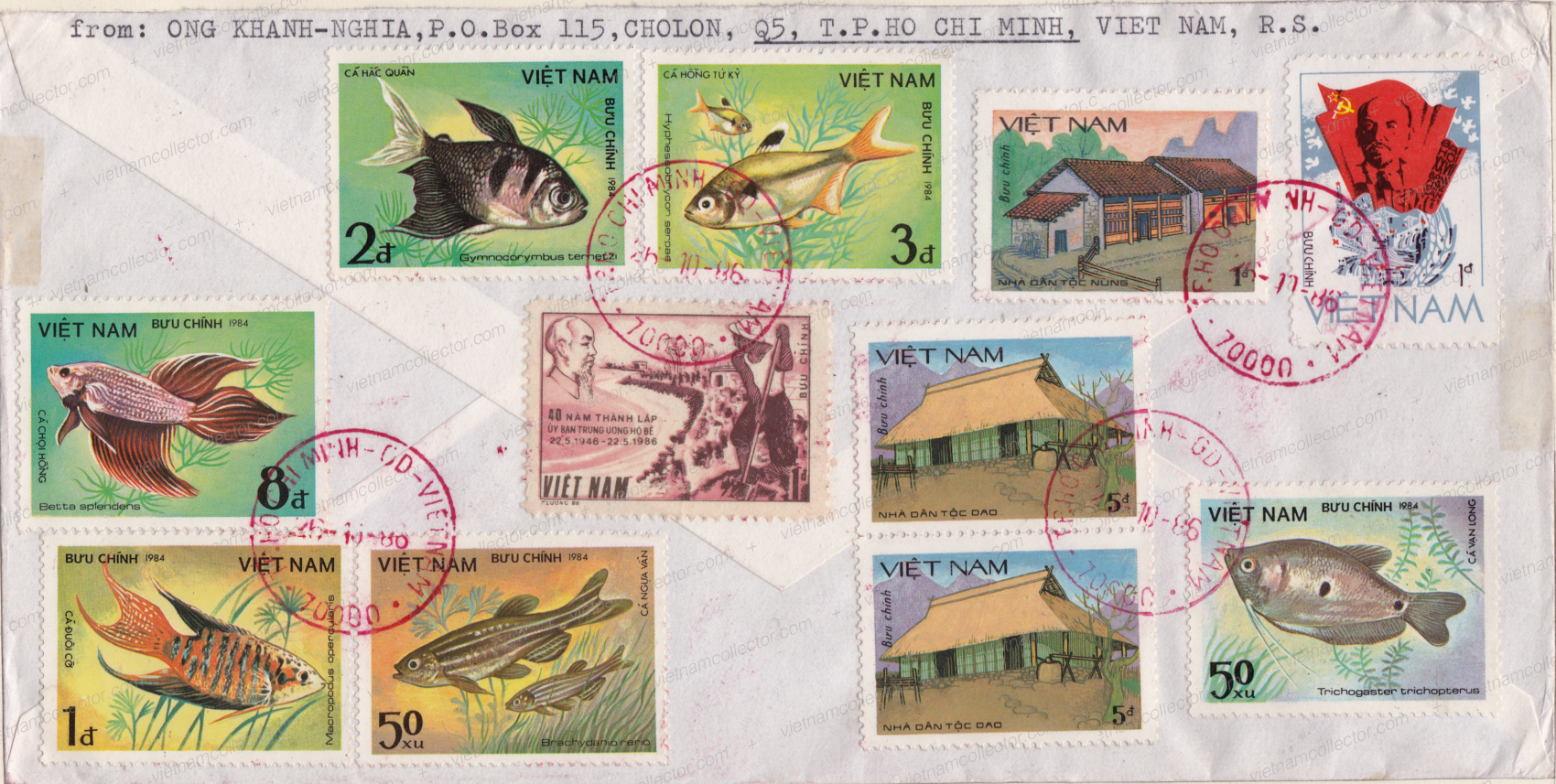 Registered air mail letter sent in October of 1985 from Ho Chi Minh City to Klewitz. The letter carries the stamp set and souvenir sheet for the Liberation of South Vietnam set plus stamps from the Fish and Liberation of Hanoi sets for an overall postage of 216.50D (including the red free frank for 27D). Souvenir-sheets on postally used cover are very rare. Fragment of the green Fulda custom cachet on front.