Unified Vietnam, 60 Years Soviet Union, December 30th, 1982, Michel Nr. 1284; A single stamp with a 30xu nominal was issued in perforation 11.0. The stamp production raised issues as especially the burgundy color process was rather uneven. Most stamps show color blisters within the burgundy printing run. These are normal for this stamp, only stamps without any burgundy color deficiencies are rare.

Here is the mint stamp. Note the many blisters inside the burgundy print.

Here is a rare mint block of four. Rare for the reason that the top left stamp shows no color blisters!

Other production errors did occur. Here is a mint block of four that shows a diagonal paper fold affecting the two left stamps.

This stamp was not officially released imperforate however a small number of imperforate trial proofs have come to market. Here is a mint block of four of them that also shows an over-inking of the burgundy color run. 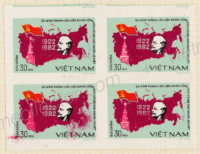 Imperforate trial proof pair that only shows the turquoise and yellow printing run.

Mint block of sixteen stamps that shows significant perforation errors. Many of the prongs have broken off leaving a number of imperforate areas in-between stamps. Also the printing plate was dirty during production leaving black paint traces in some parts of the block.

Rare registered letter featuring pairs of two different color shades of the stamp along with the missing perforation holes. The letter also shows the October Revolution set plus some Asia Games stamps for an overall postage of 13.80D.Fragment of green Fulda custom cachet on front.

Very rare registered letter featuring the imperforate Soviet Union stamp, a mis-perforated stamp plus a stamp with a paper fold. Imperforate and error stamps on postally used cover are very rare. The letter also carries an imperforate Military Free Frank from 1984 that was not intended for international postage. Together with the other NVN stamps and the red free frank for 5D the overall postage of the letter amounted to 16.62D. Green Fulda custom cachet on front. 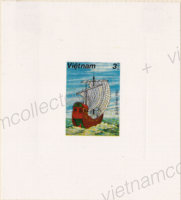