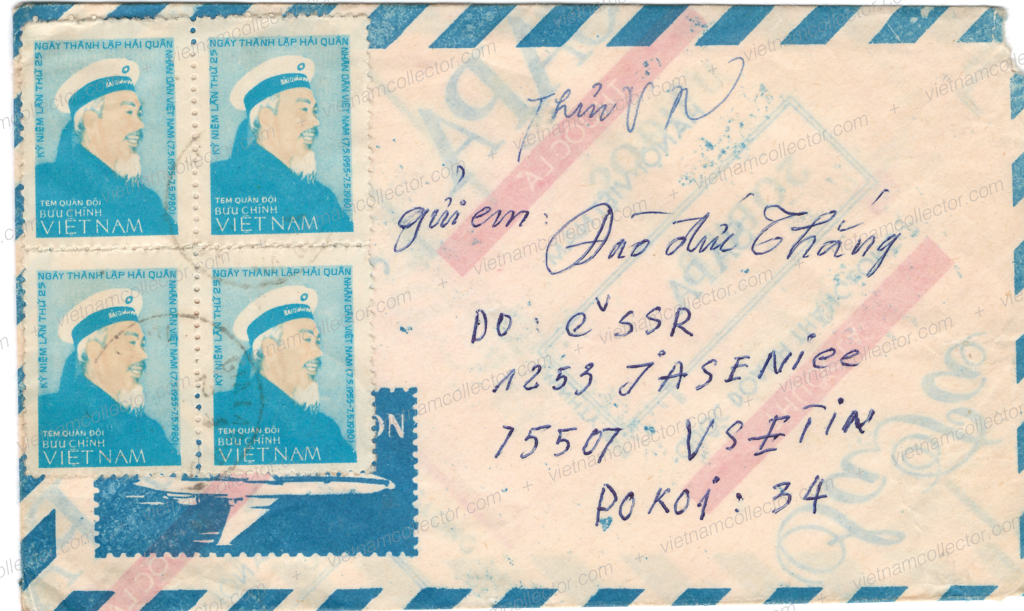 Unified Vietnam, 25th Anniversary of the Navy/Military Free Frank, August 5th, 1981; Michel Nr. M35-38; A total of four stamps were issued with no nominal value and in perforation 11.0 (except Michel Nr. 36 which is perforated 11.5:11.75). The stamps were produced by the Tran Phu Printing House. The confection of the larger sailor stamp was unusual with 117 copies per sheet (13 rows of 9 stamps). The small stamps were produced in sheets of 16 stamps and 16 rows which normally would amount to 256 stamps per sheet, however, in order to make live easier for postal clerk the last six stamp cliches at the bottom of the sheet were removed (or covered up) so that each sheet only contained 250 stamps. Stamps with attached empty fields are often offered as “errors” but they are in fact standard on every sheet. Michel states that the last two stamps were issued ion April 22nd, 1982 but that is likely to be incorrect. The joint August 5th, 1981 issue date comes from the official Vietnamese Postage Stamp Catalogue which probably has the better information.

A stamp with the same image as Michel Nr. M36 but with a 12xu nominal value and a Buu Chin inscription (Michel Nr. A1178) was also produced on August 5th, 1981 but was not released until years later as the postal rate in Vietnam had risen from 12xu to 30 xu in the middle of 1981 and so the stamp was no longer particularly useful.

Mint blocks of four of the small stamps.

Here is the green free frank from the second row from the bottom of the sheet with a vertically attached empty field. There is actually a ghost image of the removed cliche’.

Detailed scan of the empty field with the ghost image.

Local letter sent from Ban Me Thout (Dak Lak Province) in the mountains near Laos sent to Ho Chi Minh City. Ban Me Thout is not a naval town so this stamps was, despite having a sailor image, not issued specifically for the Navy. The stamp is hard to find on postally used cover.

Local letter sent from Vinh Be Thuy (small post office) to Tien Giang in January of 1984. 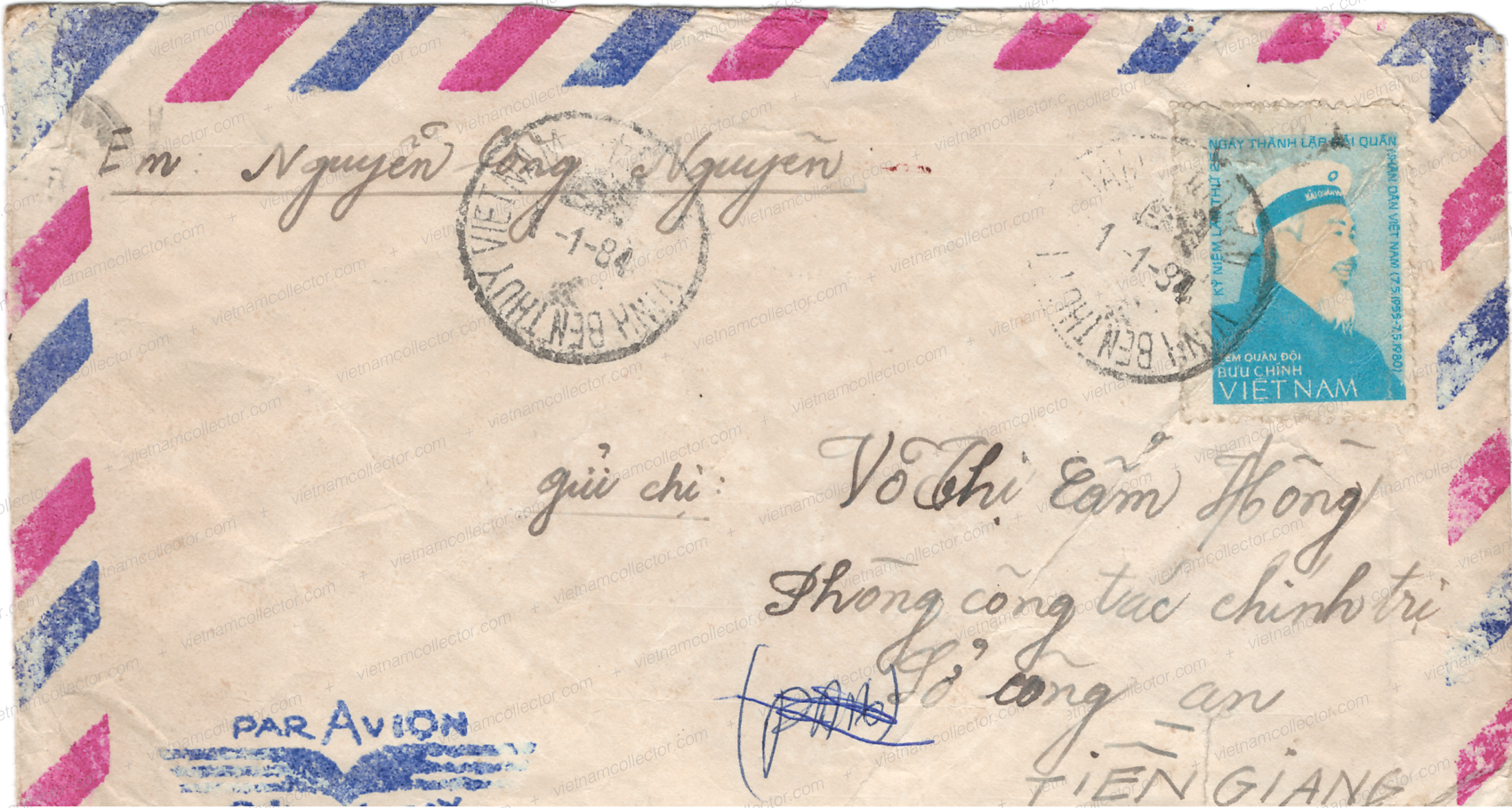 Local letter sent from Da Nag to Saigon in 1983. 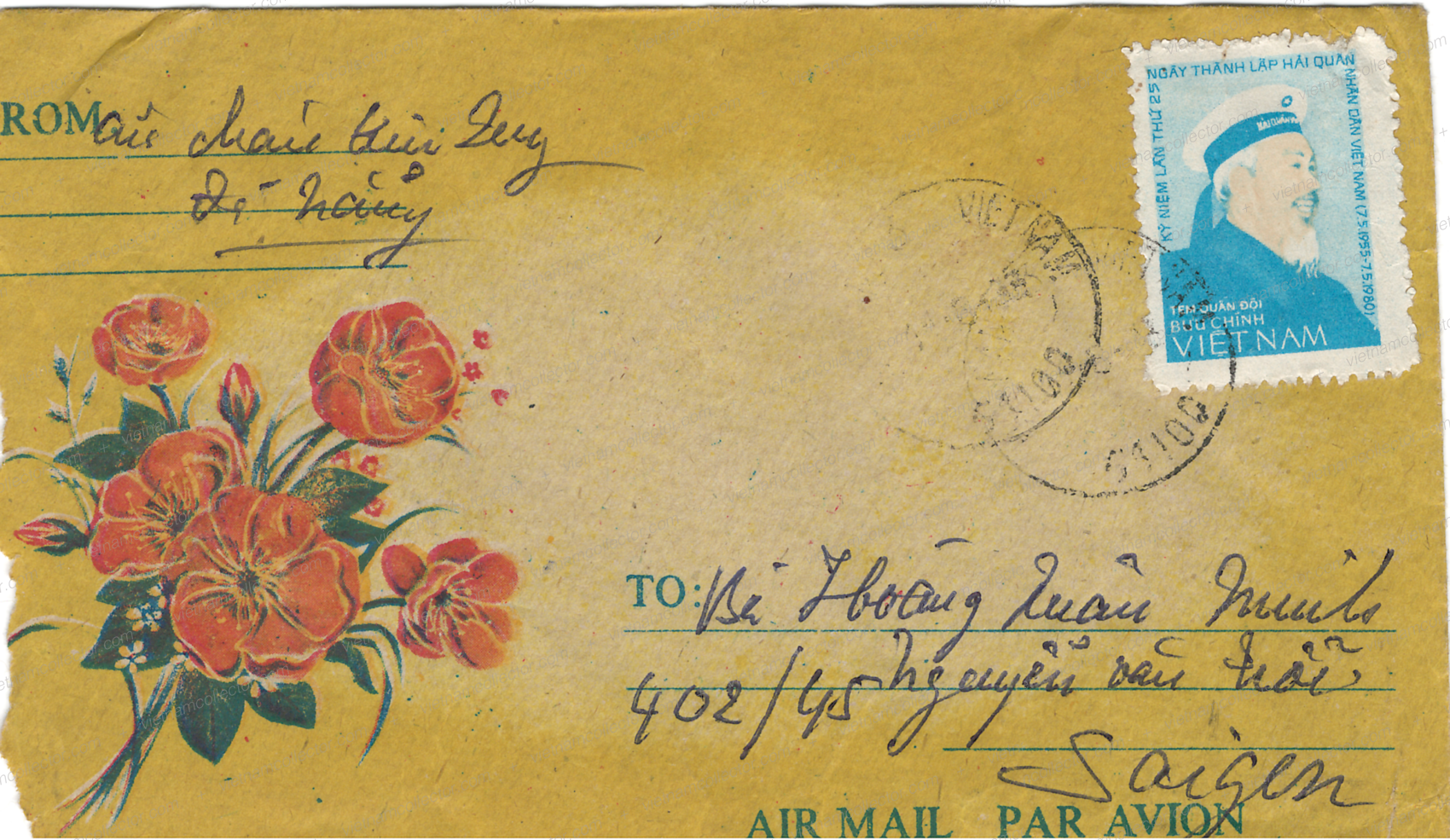 Rare international letter carrying a block four of the blue HCM as sailor stamp sent to a fellow Vietnamese in Czechoslovakia in March of 1983. Military Free franks were not valid for international postage as they carried no nominal value and ere handed out free of charge as a social benefit. Nevertheless, the Vietnamese postal clerk did not object and the letter was delivered without any postage due remarks on the cover.

Registered air mail letter sent from Nguyen Trai in February of 1984 to Klewitz. The letter carries the other perforated Intercosomos stamps from the set plus two of the 2D stamps from the Bulgaria set for an overall postage of 19.73D (including the red free frank for 4.25D). Note that one Bulgaria stamp is an error stamp on which the top inscription and nominal value is barely visible. Error stamps on postally used cover are very rare. The letter also carries a Military Free Frank issued in 1981. Military Free Franks were not valid for international mail due to their missing nominal value but clearly the postal clerk did not have any objections in this case. Green Fulda custom cachet on front.

Local letter sent by a militia women her sister in July of 1983 from Hanoi to Ho Chi Minh City.Hanoi machine cancel.

Local letter (full contents preserved) sent by a member of the military (Hom Thu 7T 485) within Ho Chi Minh City in June of 1982. Illegible arrival cancel on the reverse.

Local letter sent from Tan Binh (near the Chinese border) to Ho Chi Minh City in May of 1985.

Rare multiple franking of the green military free frank on a local letter of the second weight level sent from Chau Ghe (small post office) to Chi Minh in April of 1985.

Local letter sent by a member of the militia in 1983 from Dong That Province to Ho Chi Minh City. HCM City machine arrival cancel on the reverse.

Local letter sent within Ho Chi Minh City in August of 1984. The stamp shows a perforation error as it is oversized.

Local letter sent from Ho Chi Minh City to a member of the military (Hom Thu Nr. 7A 6930). The girl on the stamp appears to look towards her right. 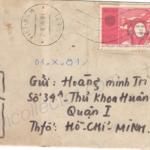 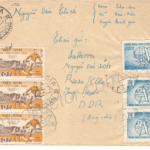 Opening of the new Stadium in Hanoi