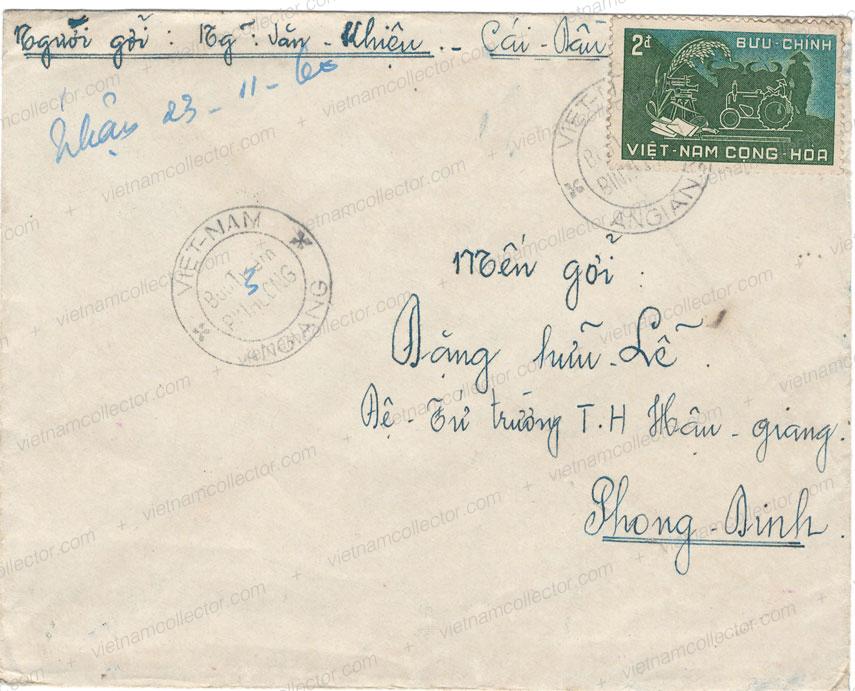 South Vietnam, Land Reform, July 7th, 1959, Michel Nr. SVN 184-187; Four stamps in nominals of 70c, 2D, 3D and 6D were issued in perforation 13. Land reform in South Vietnam refers to reforms proposed by the United States and implemented by South Vietnam. Seeking to undermine the popularity of the communistViệt Minh’s policies of land redistribution to poor peasants, the government of South Vietnam implemented their own land-redistribution policies during the Vietnam War (Wikipedia). 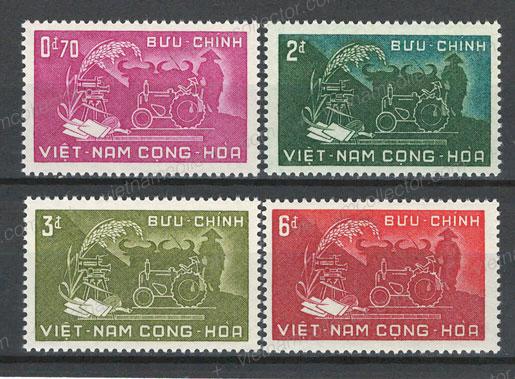 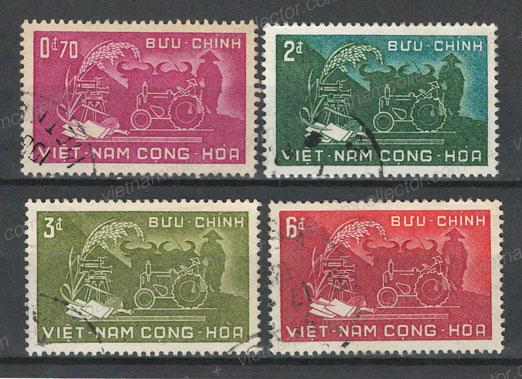 These stamps were not officially released imperforate, however a small number of imperforate trial proofs have come to market. Here is the set in imperforate pairs. 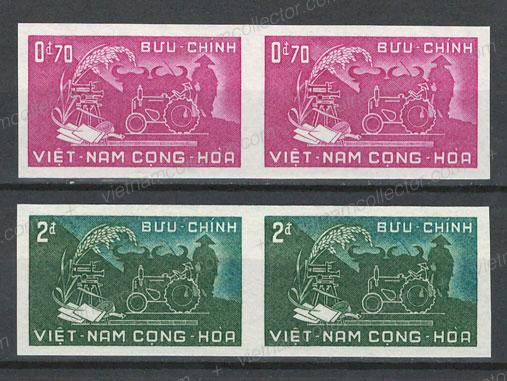 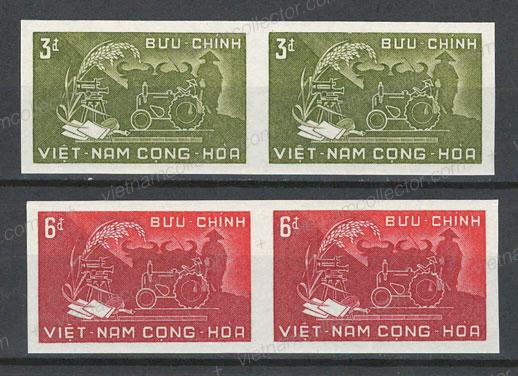 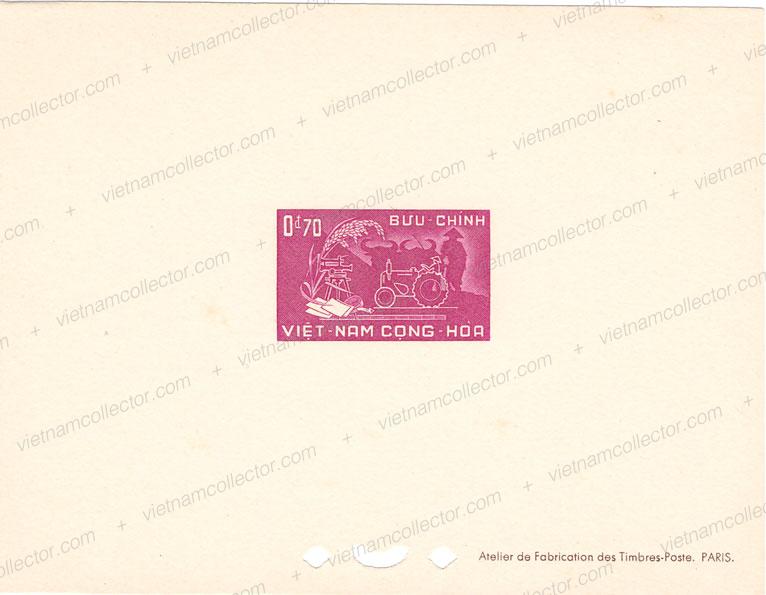 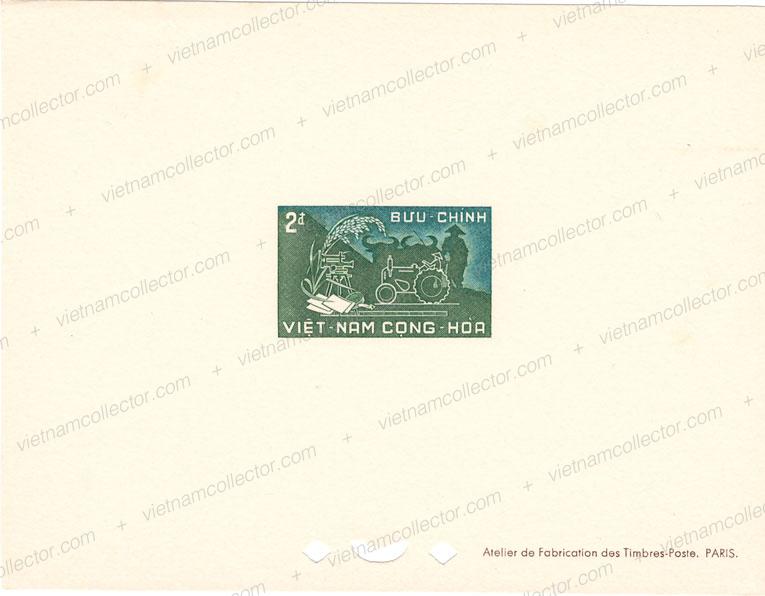 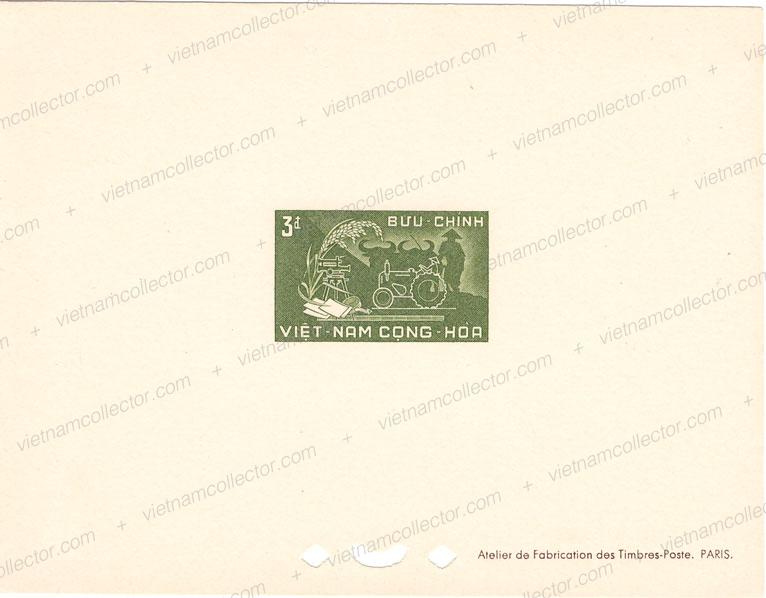 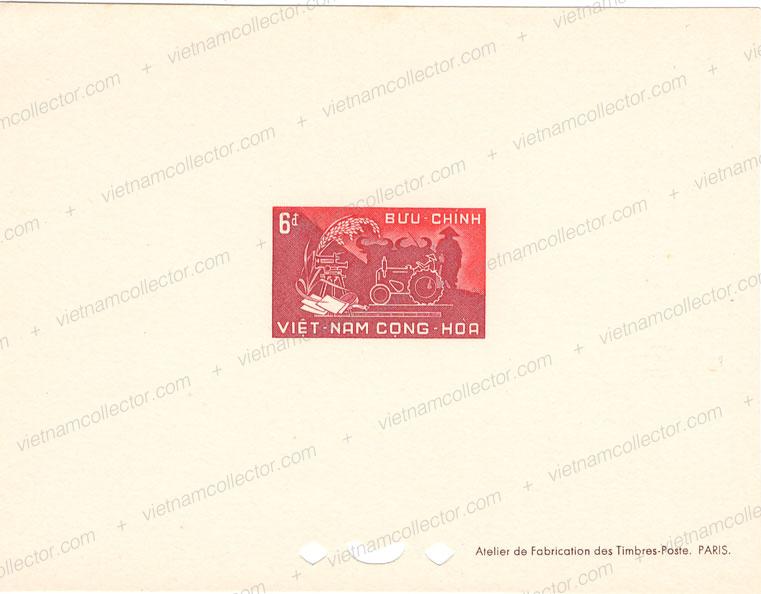 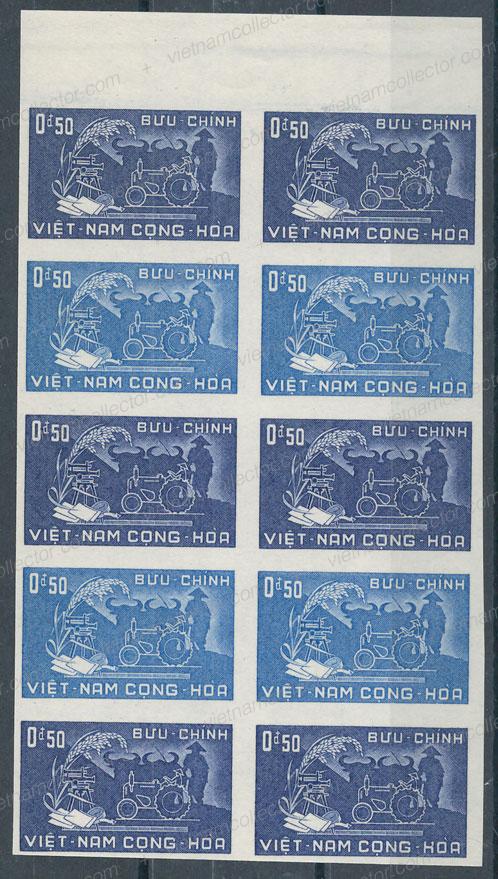 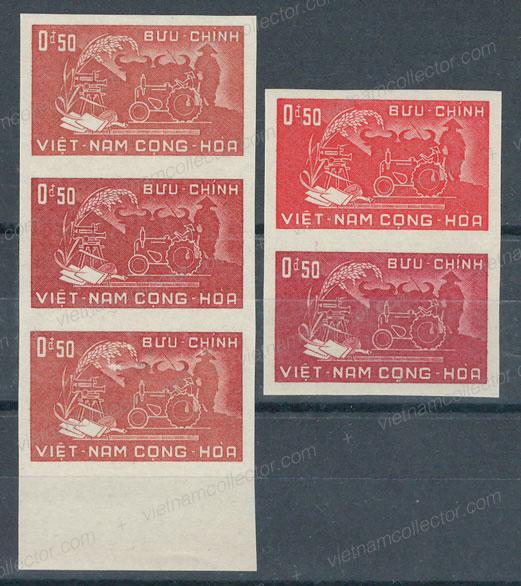 Mixed franking of the 80c Development of Agriculture and 70c Land Reform set paying an overall postage of 1.50D on a domestic letter sent by a member of the military from KBC 3318 to Saigon in April of 1962. Red KBC hand cachet illegible. Saigon machine arrival cancel o the reverse. Members of the military only paid 50% of the regular postal tariff. 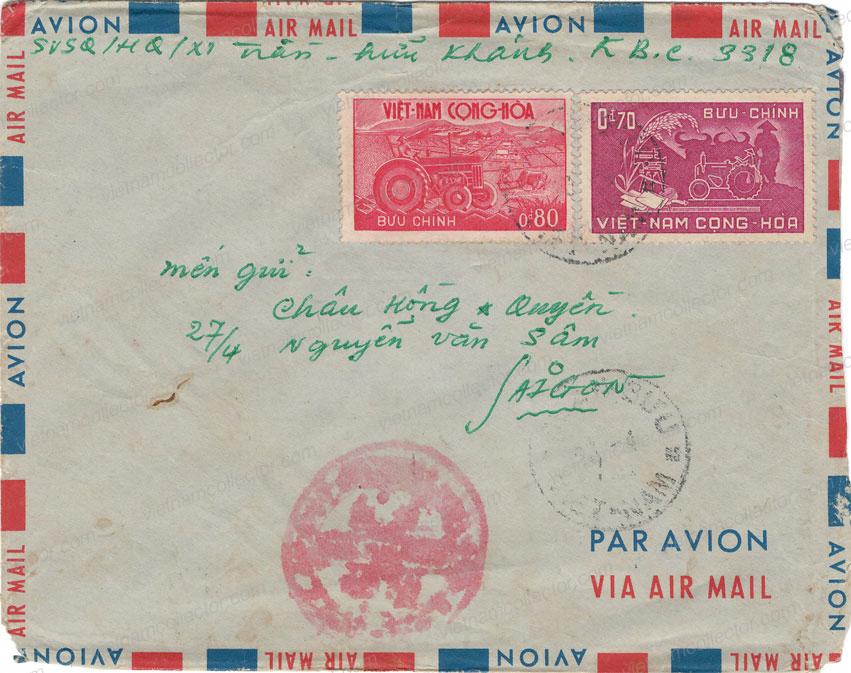 Single franking of the 2D value on a rare letter that was cancelled with a rural cancel from Angiang Province (dateless) and sent from Cau Tau to Phong Dinh. Chau Tau and Long Xuyen transit cancels on the reverse. The letter was mailed in November of 1960.

Detailed scan of the rural cancel 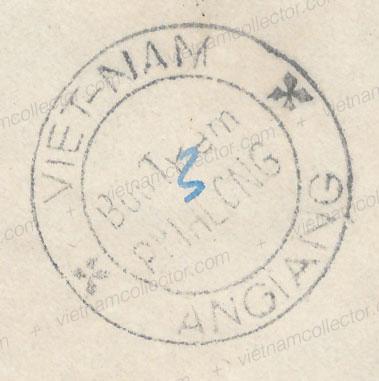 Single franking of the 2D value on a domestic letter sent from Tay Hoa to Hue in October of 1960. Hue arrival cancel on the reverse. 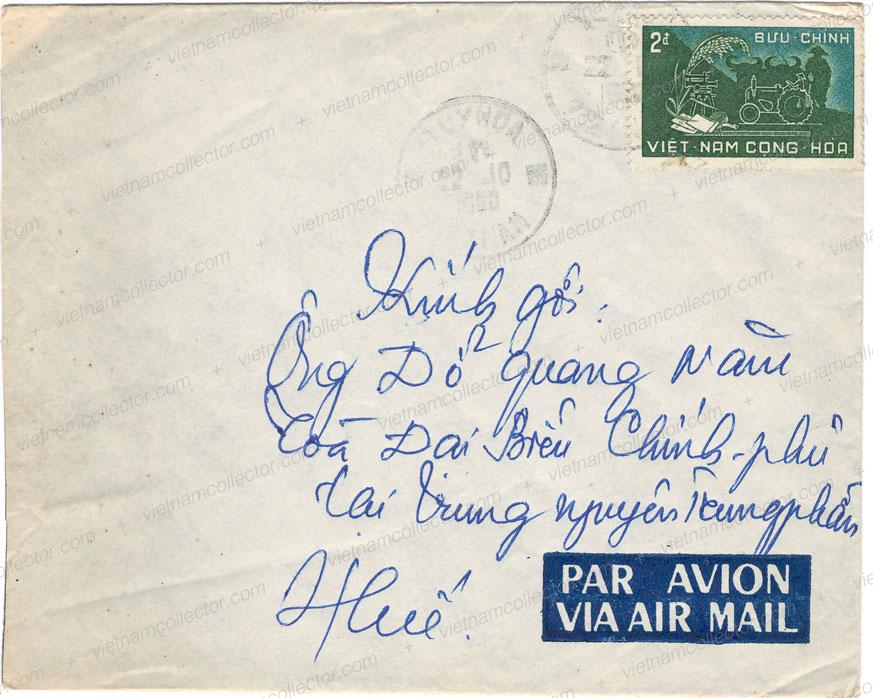 Mixed franking of the 3D Boy Scout stamps (2) together with stamps from the Land Reform and Children’s Day sets for an overall postage of 8.50D sent within Saigon in March of 1960. 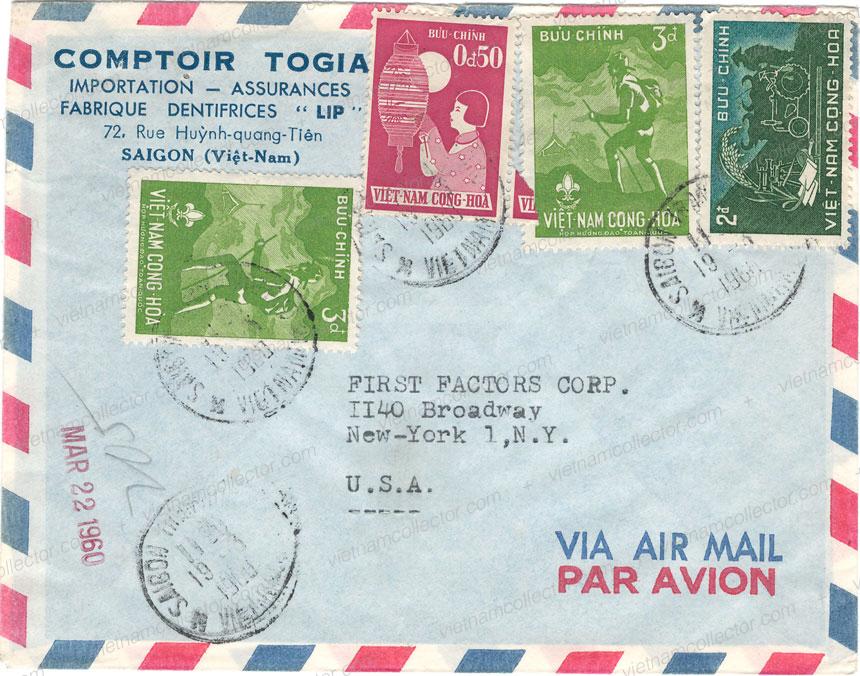 Single franking of the 3D value on a domestic letter sent from Tan Dhau to Kien Phong in August of 1962. Black propaganda hand cachet on front. Saigon machine transit cancel on the reverse.

Single franking of the 3D value on a domestic letter sent within Saigon September of 1962. 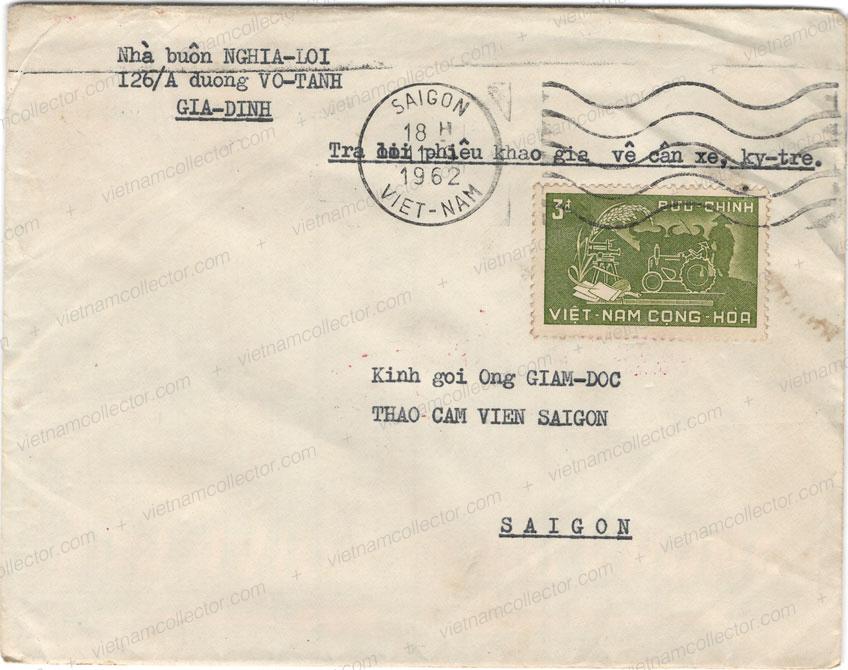 Single franking of the 6D value on a domestic letter mailed within Saigon in May of 1967. 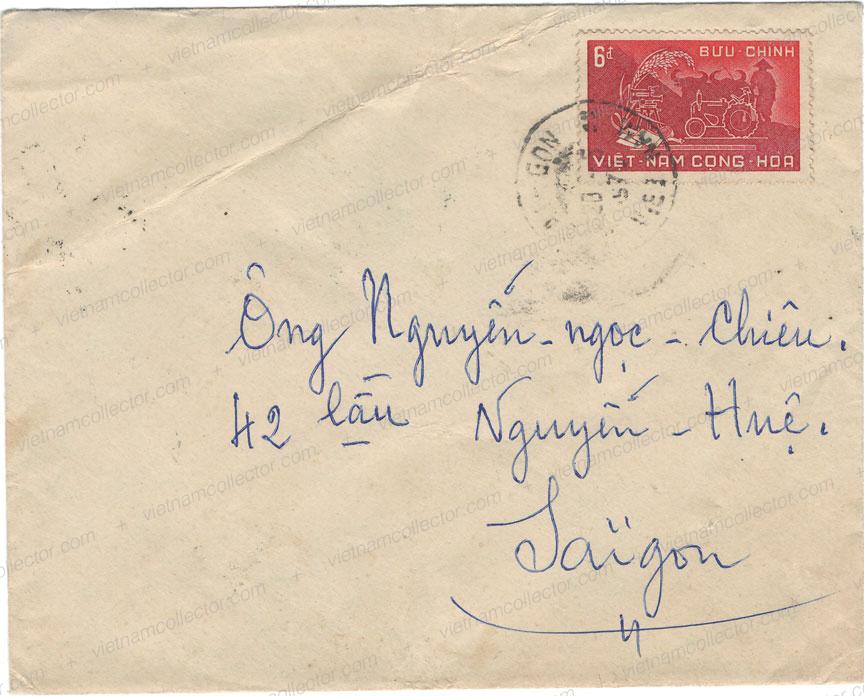 Single franking of the 6D value on a domestic letter sent from Saigon to Nha Trang in Marc of 1971. 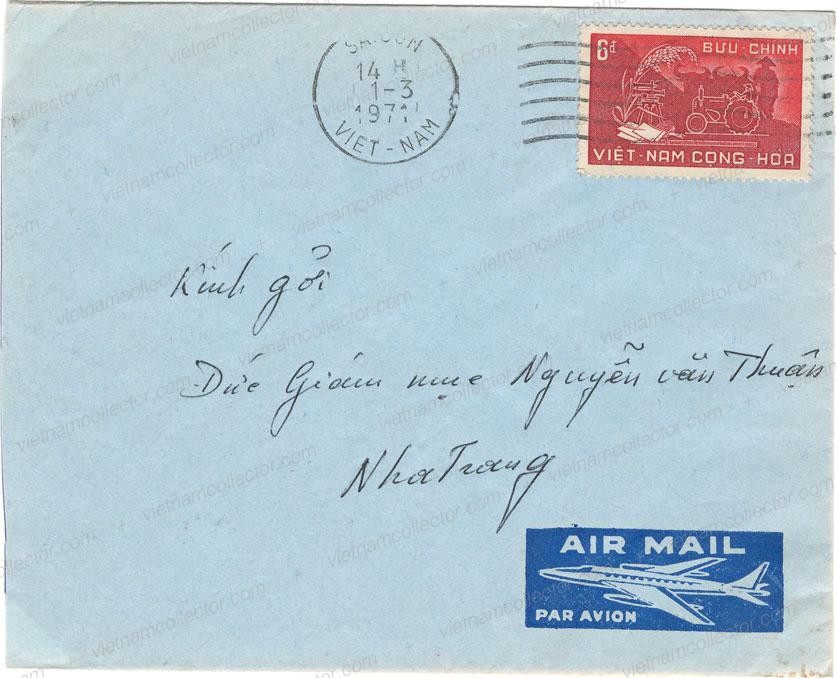 Mixed franking of the 6D Land Reform value (3) together wit stamps from the Election of Ngô Đình Diệm, Family Law and 4 Years Constitution paying an overall postage of 19.50D on an international letter sent from Saigon to the United States in June of 1961. 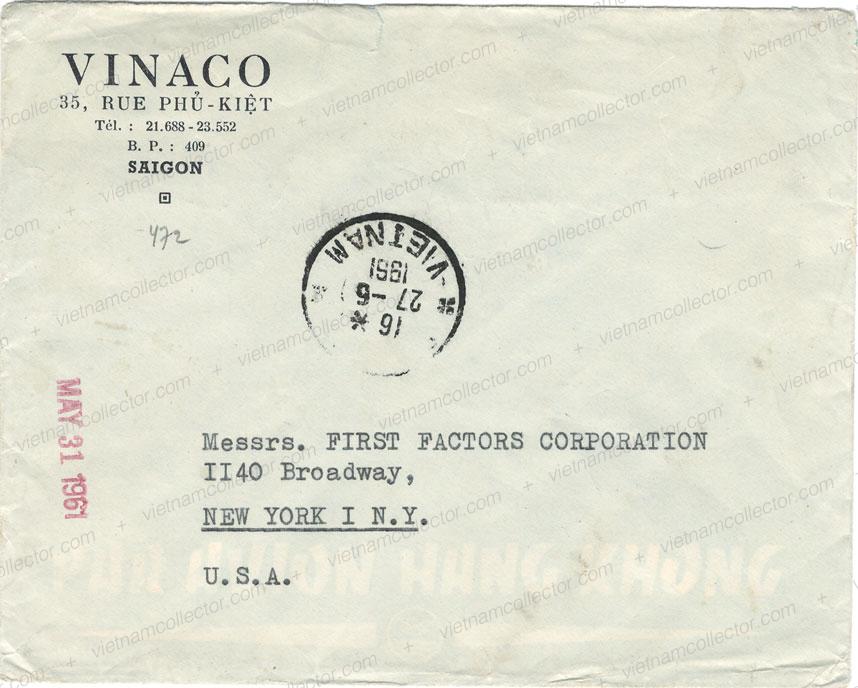 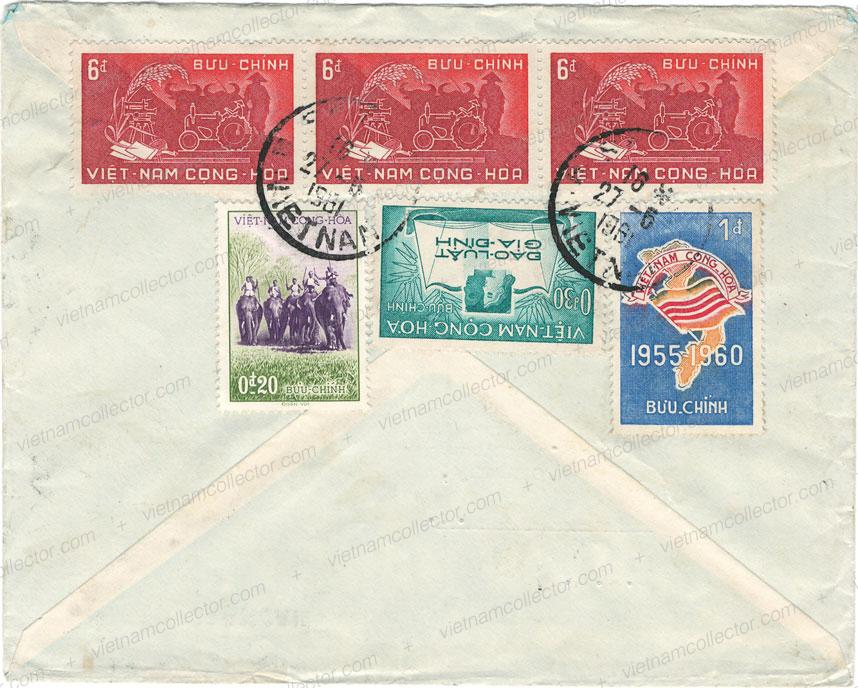 Mixed franking of the 10D General Mobilization stamps together with the 6D Agrarian Reform and 2D National Unity stamp paying an overall postage of 18D on an official letter sent from Saigon Tran Hung Bao to Switzerland in April of 1970. 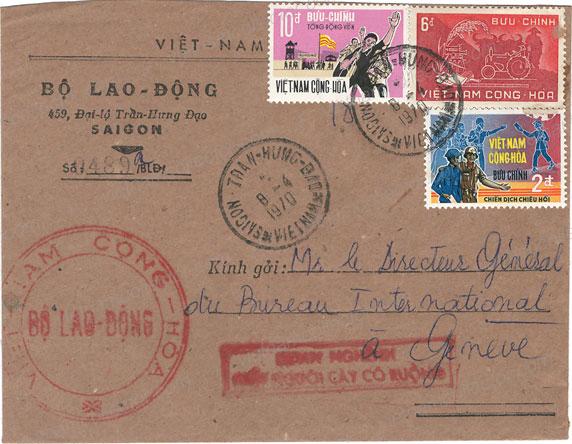 Mixed franking of the 6D Indigenous People stamp together with stamps from the Trans-Vietnamese Railway, Air Mail, General Mobilization, Agrarian Reform and Labor organization sets paying an overall postage of 80D on an international air mail letter sent from Hoi An to West Germany in December of 1969. 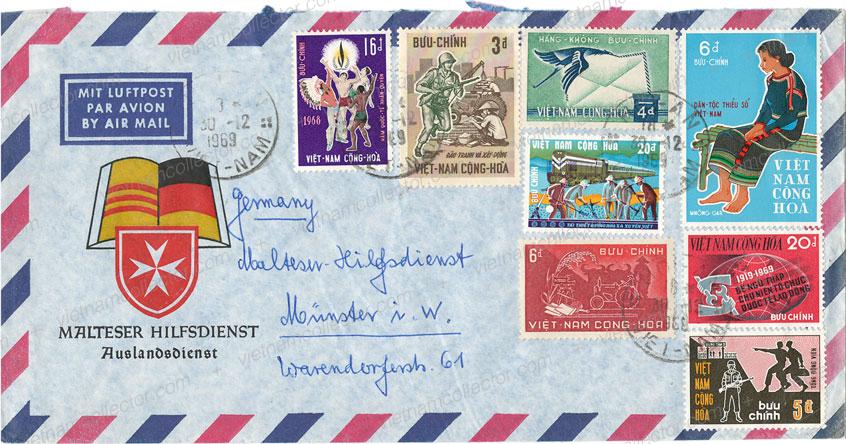 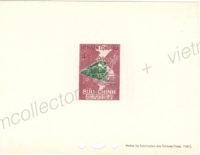