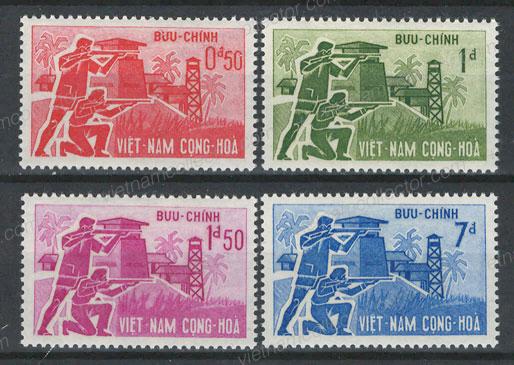 Mint blocks of four with matching side margins. First Day cancel applied to the margins. 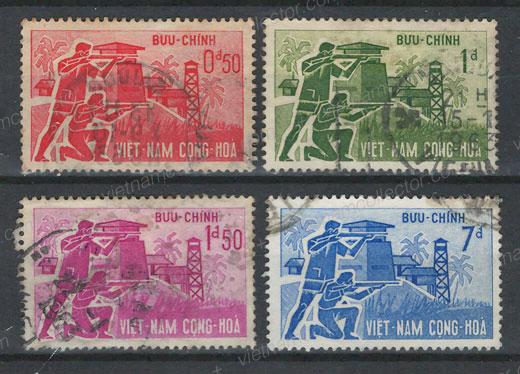 These stamps were not officially released imperforate, however, a small number of imperforate trial proofs have come to market. Here is the imperforate set in blocks of four. 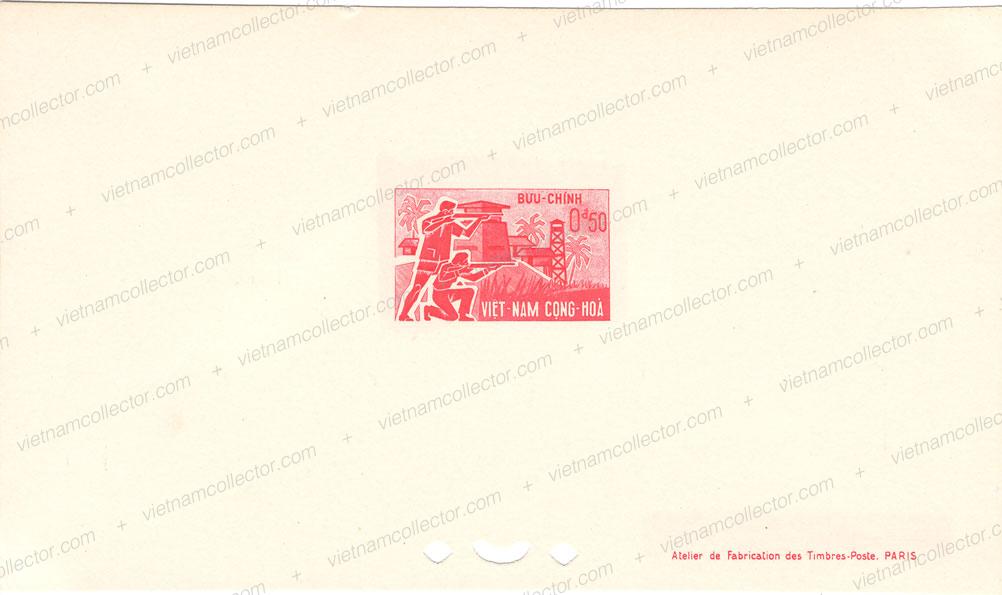 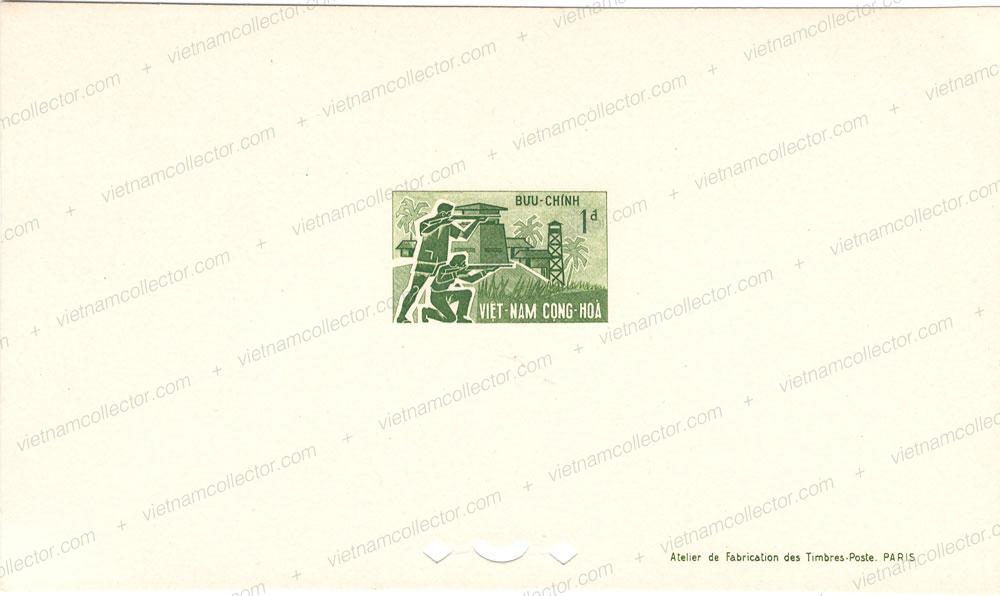 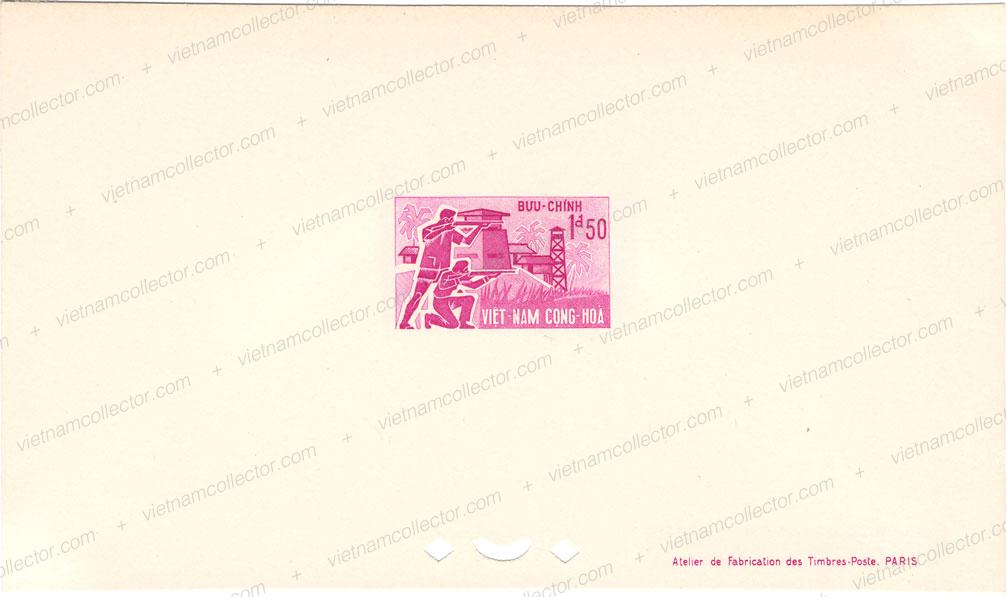 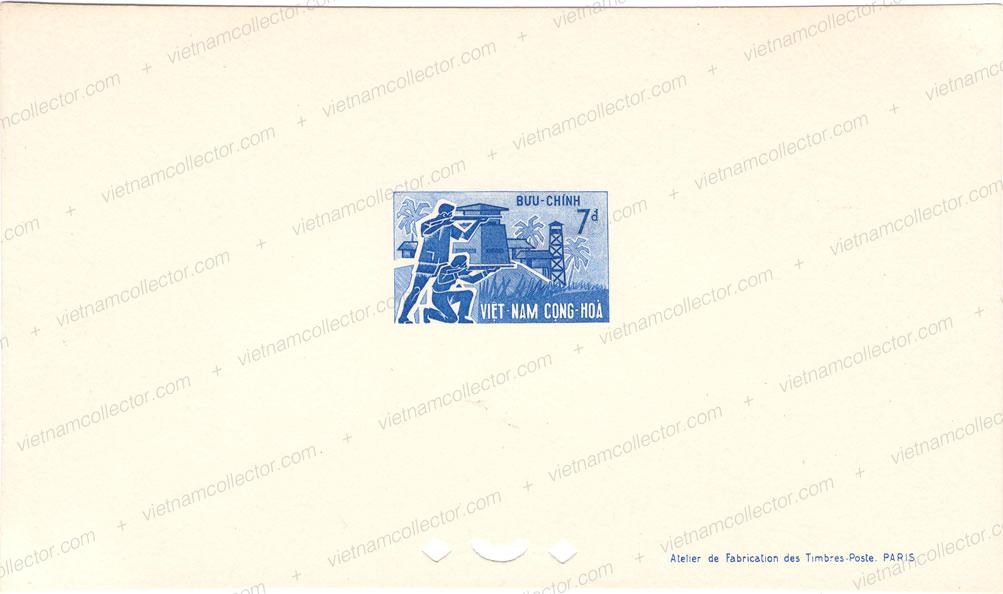 Color Trials; prior to authorizing the final printing run for stamps the Vietnamese Postal Authority requested a few sheets of color sheets on one particular value of a set in order to decide which final color combination would be best suited for each stamp within the set. The color sheets had the size of a standard sheet but contained alternating color options on the designated nominal value. While these sheets were only intended for internal postal use some of them came to market. Virtually all of these complete sheets were cut apart. So one mostly finds single color proofs or small strips of them. While they are actually very rare one can still obtain them for under $10 a piece (with some exceptions) as not many collectors appear to have an interest in them so far. Here are various color trials for the 1.50D value. 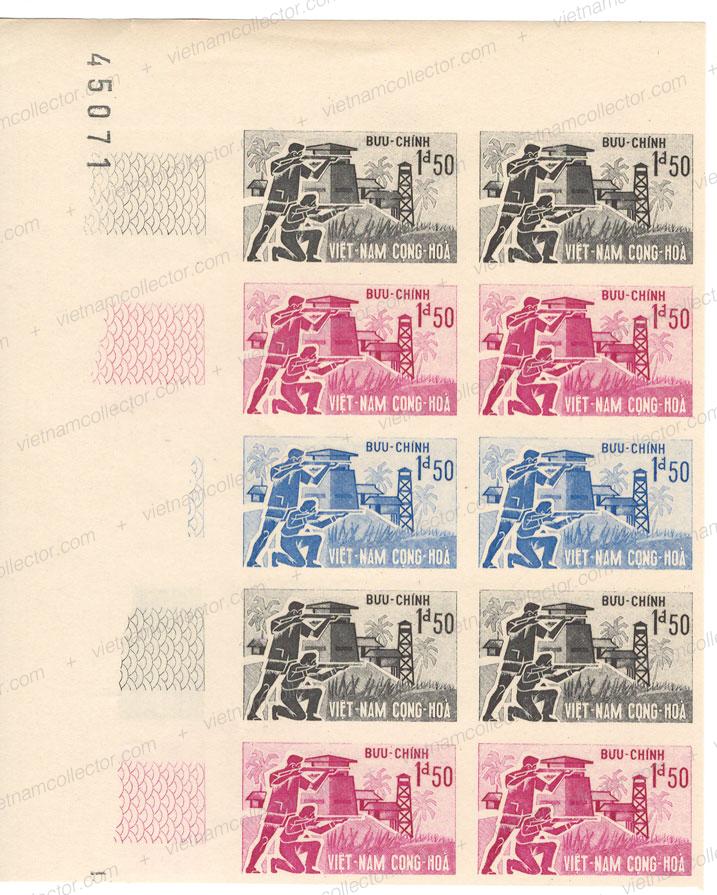 Rare multiple franking of the 50c value on a domestic letter (full contents preserved) paying an overall postage of 1.50D sent from Go Vap (small post office) to a member of the military (KBC 3318) in March of 1963. Letters to members of the military only had to pay 50% of the regular postal tariff. 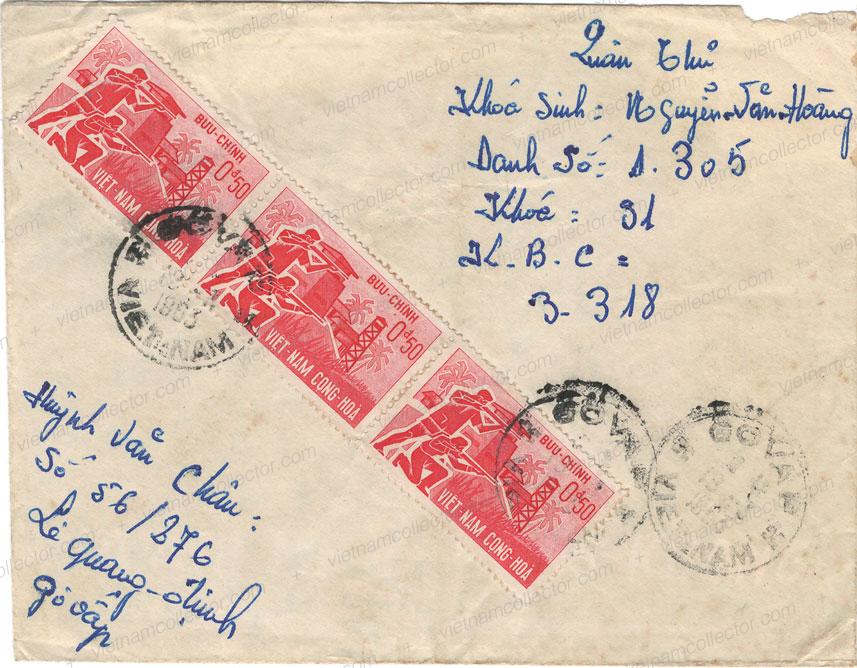 Mixed franking of the 50c Defense stamp together with the 1D Birthday of Ngô Đình Diệm paying an overall postage of 1.50D on a rare international printed matter mailing sent from Tourane (Da Nang) to the United States. 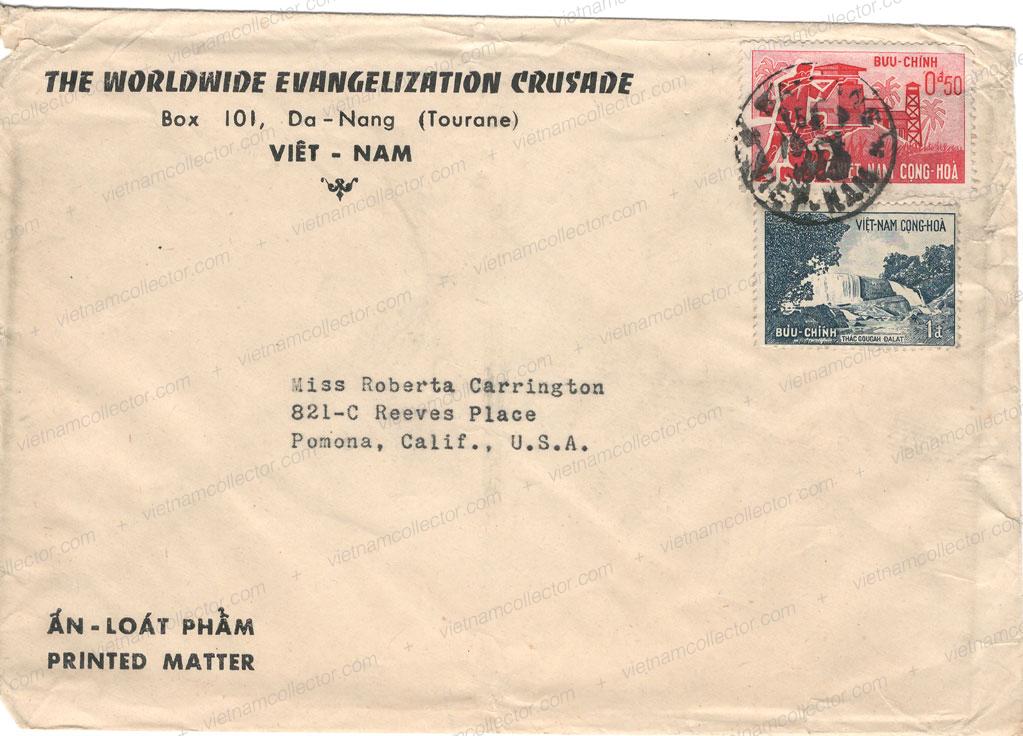 Mixed franking of the 50c and 1D Defense stamps paying an overall postage of 1.50D on a domestic air mail letter sent by a member of the military (KBC 4109)to a civilian in Saigon in November of 1962. Members of the military only had to pay 50% of the standard postal tariff. Cancelled by the mute Quan Buu military cancel. Illegible red KBC cachet on front. Partial Saigon machine arrival cancel on the reverse. 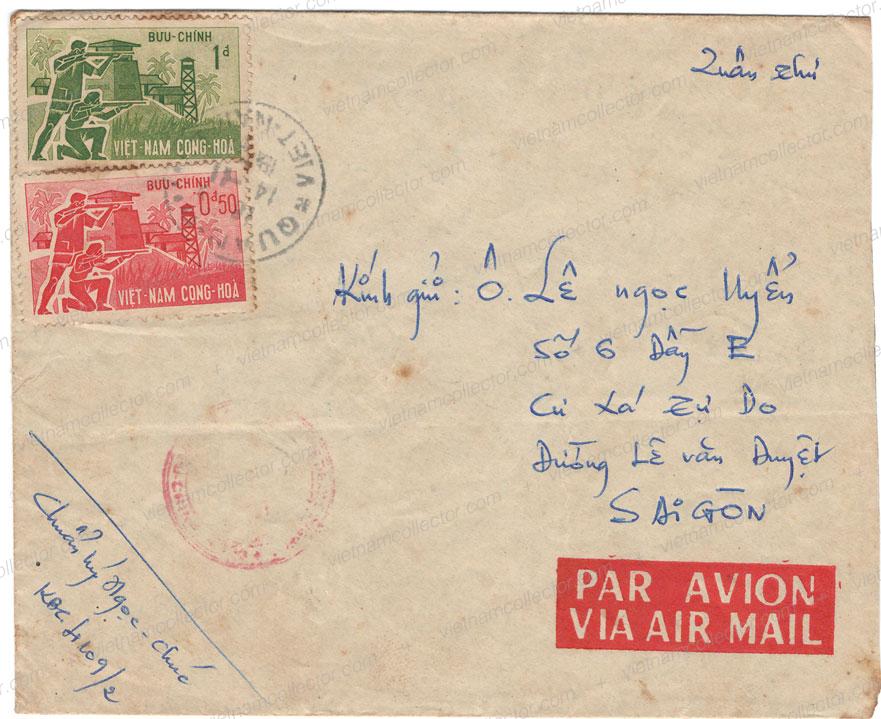 Mixed franking of the 1D Defense stamps (2) together with two 10P Landscape stamps paying an overall postage of 22D on an international air mail letter sent from Saigon to Belgium in February of 1963. 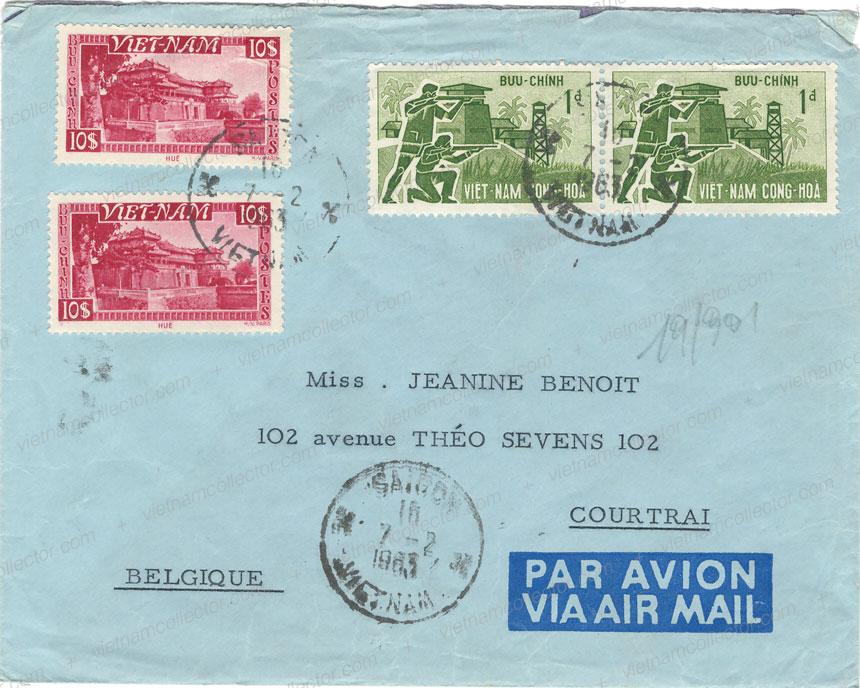 Single franking of the 7D value on a registered domestic air mail letter sent within Saigon in December of 1966. 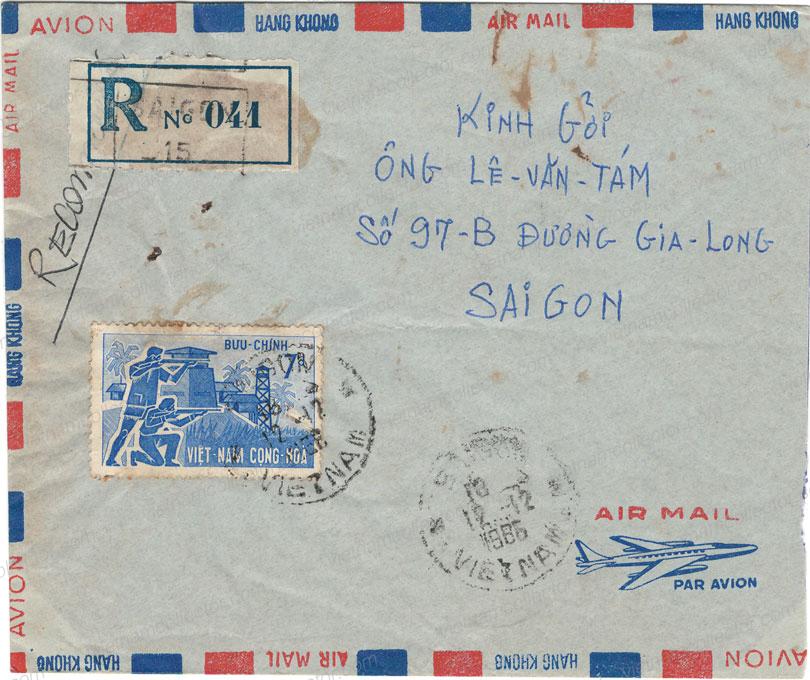 Mixed franking of the 3D values (2) together with stamps from the Buildings and Landscapes and Defense paying an overall postage of 20.50D on a registered international air mail letter sent from Saigon to France in April of 1965. Rare rural cancel from a suburban Saigon post office. French arrival cancel on the reverse. 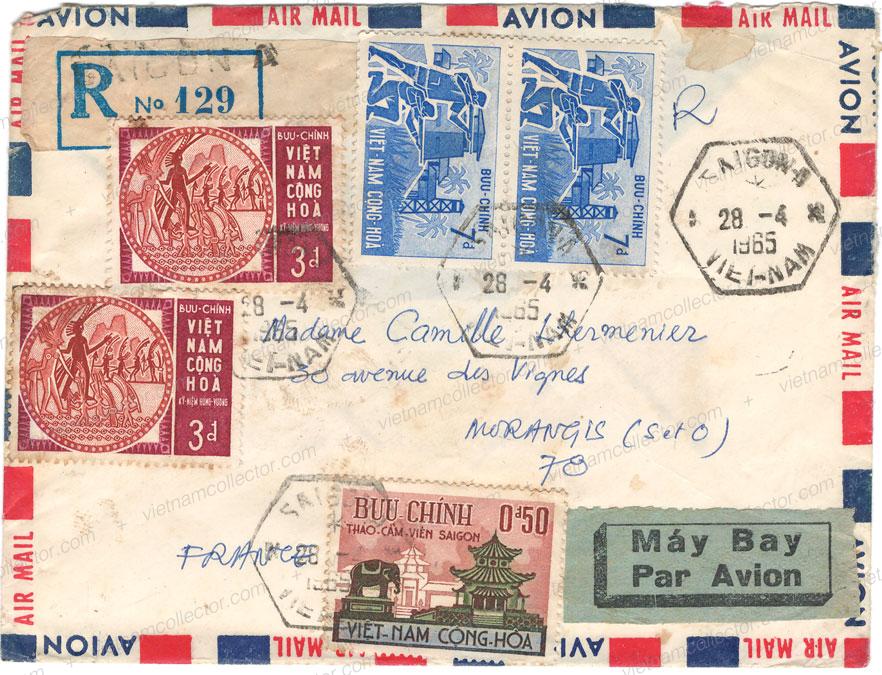 Mixed franking of the entire Defense set on a registered air mail letter sent from Tam-Ky to West Germany in October of 1962. 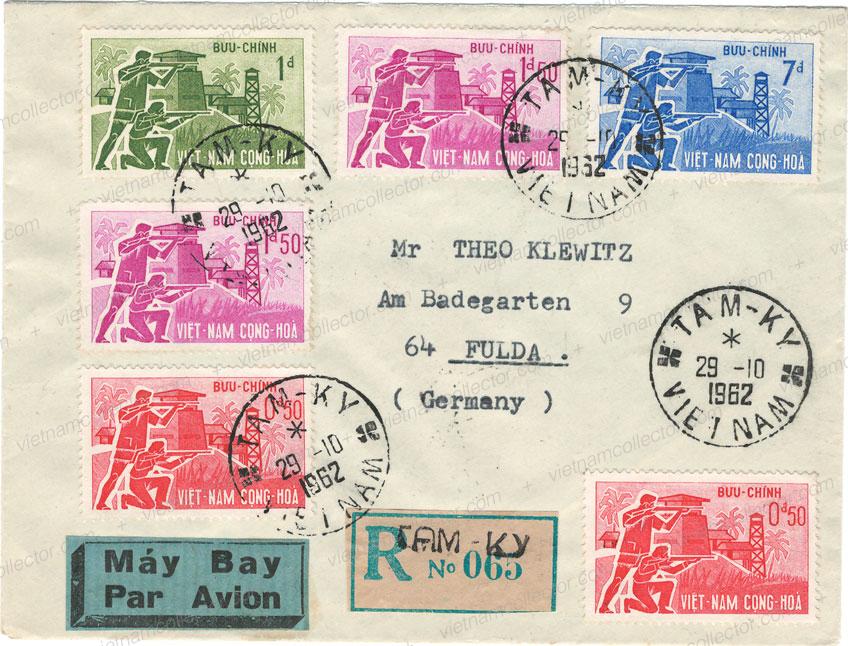