in 1946 the Viet Minh began issuing overprints on Indochinese stamps that had little to do with postal necessities but were more focused on revenue generation. So the high nominals were not used much for postal traffic but should be considered more as donation receipts from the Viet Minh. While previous overprints were denominated in the Centimes and Piastres of the old Indochinese Regime the last overprint series was denominated in the Xu and Dong of the new shadow Viet Minh Government that had started to produce its own banknotes in 1945.

Here are two samples of the Viet Minh currency. This 100 Dong note was printed in 1948: 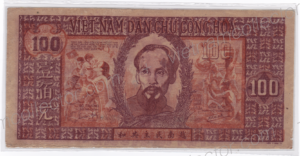 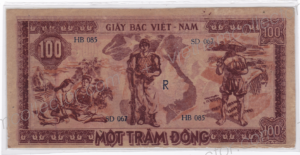 The standard letter rate was a mere 30c, so producing stamps that carried a new nominal of 1 to 15 Dong was not really required as very few items would have commanded such a high postage. The idea behind these surcharges was more connected with raising revenue through stamp collectors for the resistance effort of the Viet Minh. Already in 1945 the Viet Minh had made appeals to the local population to donate money, jewelry and other valuables to the Viet Minh in order to strengthen the resistance against the Japanese. This resistance effort then turned against the French upon their return, following the surrender of Japan,  in October of 1945. So, apart from the very small nominals of 30 to 60 cents (xu) these stamps had little postal function and as a result their are basically unknown on postally used covers. Also, at that time the stamps issued by the Viet Minh were not recognized by the Universal Postal Union (UPU) that regulates international postal regulations. As a result, they could only be used locally within Vietnam but not for international mail. 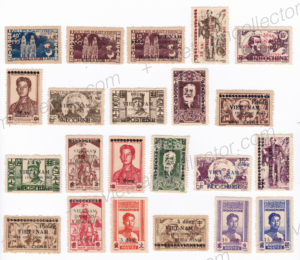 There are a few errors that appear on these stamps. One is on the 30 xu where the “H” in “China” is partially broken off on top so that the last letter appears as a “B” instead of an “H”. 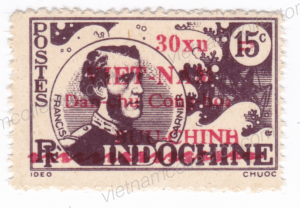 Also underlying production issues, of course, carry on to the overprinted stamps as well. Here is a specimen of the 30 xu value that remained imperforated on the right side. 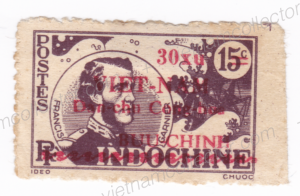 The 4 Dong and 10 Dong value show a plate error in the original stamp. The right stamp of each pair shows the elephant without an eyeball. The left stamps are just for comparison purposes.

One will occasionally find philatelic covers that were prepared to get these stamps cancelled. Here is a blanc envelope that carries the 30c (xu) value among an other Indochinese overprint and some early North Vietnamese stamps. The cover was cancelled on December 19th, 1954 so very much later than the issuance date of the stamp. 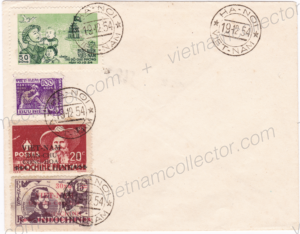 Philatelic letter prepared by “Maison Vietnam Philatelique” using one of the 9 Hao HCM stamps along with some Viet Minh overprints (including the 30 xu value of the 3.rd Overprint series). The letter was cancelled with the Hanoi Trung Uong Bac Bo canceller on November 8th, 1946. 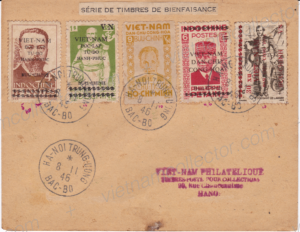 Below is a rare cover that carries the 2 Dong (Michel VM Nr. 38) and 4 Dong (Michel VM Nr. 42) nominal overprint. While the cover is clearly of philatelic origin given its 6 Dong postage (when only 30 xu were required) it is nevertheless rare to see these stamps being used on cover or even cancelled. Most buyers simply opted to put these expensive nominals into their stamp album and not use them. The circular cachet states “To assist the needy”  and “Let us celebrate” Also the date of the cancel is interesting . December 18, 1946 was exactly one day before the outbreak of open hostilities between the French and the Viet Minh on December 19th, 1946 that led to the Indochinese War. 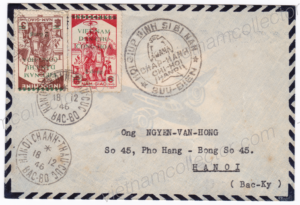 Here is the 30xu value in a correctly franked single franking on a local letter dated September 29th, 1946. 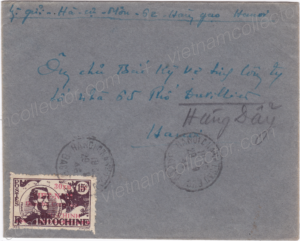 The next letter is more of a puzzle. It is a registered letter mailed within Hanoi on June 26, 1946. It has all the signs of a postally used cover but is under-franked with only 60 xu instead of the 90 xu that were required for national registered letters. Inter-city letters, such as this, carried a reduced postage of 50% of the national rate (i.e. 15 xu) but even then the overall postage should have been 75 xu and not 60 xu. R-label and cancel are genuine so this may simply represent a mistake by the postal official. 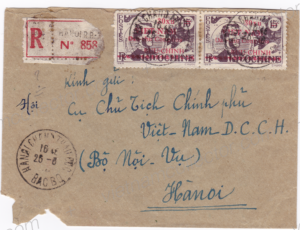 Very rare multiple franking of the 30xu value on a hand-made adversity envelope paying the registered letter rate of 90C. The letter is addressed to the leader of the Vietnam Youth organization (TNVN) in Binh Giang (Province Hai Du’o’ng). The letter was at least partially delivered by messenger as the remark “Resistance County Committee with request to hand over” illustrates. The large red Viet Minh Government circular hand stamp states “Democratic Republic Vietnam, Bac Ky (Tonkin), the number of the court, Province Lang Son, County Minh Gia. The letter was mailed on August 8th what is most likely 1946. The letter probably contained important court documents. 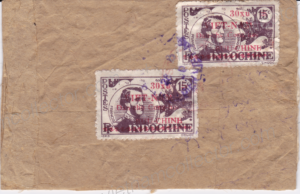 Below is a registered letter (R-label partially removed) mailed on July 9th, 1946 to another address in Hanoi. A July 10th arrival cancel is on the reverse. It is franked with a very rare mixed franking of the second and the third series of Indochinese overprints. It carries four 15c Rhodes stamps with black overprint and a single of the 30xu overprint. 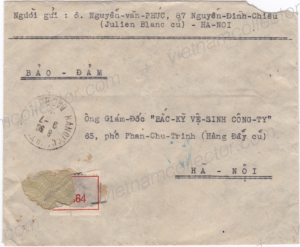 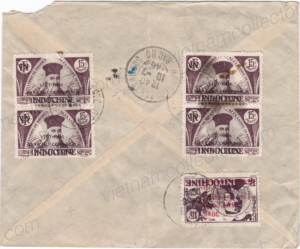 This is a a very rare piece that comes from the back of a letter that was mailed in June of 1949. At that time the standard letter rate amounted to 5 Dong which here is made up of four 5c stamps of the first overprint issue and one 30c stamp of the third overprint issue for a total of 50 cent. Due to rapid inflation the old stamps were sold and used at ten times the face value, so the overall postage is in fact correct. 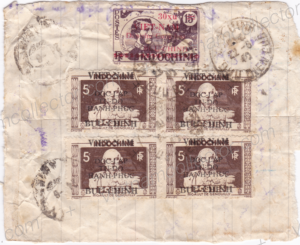 Here is a very rare complete letter that was also mailed in June of 1949. Again, the postage is up-rated 10 times so that the 50 xu that were attached amounted to the 5 Dong postage in force at the time. Thai Ninh Transit/Arrival stamp on the reverse. The letter took over three weeks to arrive. 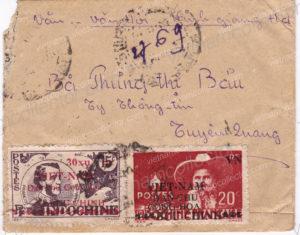 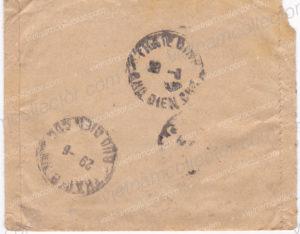 Given the high nominals for these stamps it is quite a challenge to locate any cancelled specimens. Apart from the complete set contained in the booklet depicted in the 2nd overprint series, the editor has not been able to complete another cancelled set in over 25 years of collecting Vietnamese stamps. This goes to show how ridiculous the Michel pricing, which lists mint and used with the same set price, really is for this issue. Again, they would be better off to price used specimens with -.- (cannot be priced due to lack of market activity). 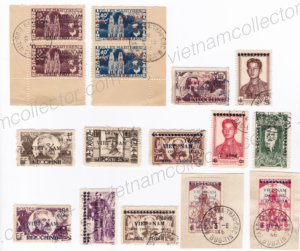 Complete sheets of the 3rd overprint issue are very rare. This probably has to do with the high nominal values involved that made acquiring a complete sheet an expensive proposition. All the editor could collect so far is an almost complete sheet (right vertical row is missing) of Vm Michel Nr. 44 (5d on 1c red-orange) 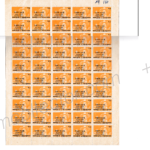 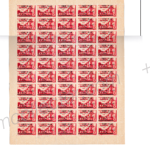