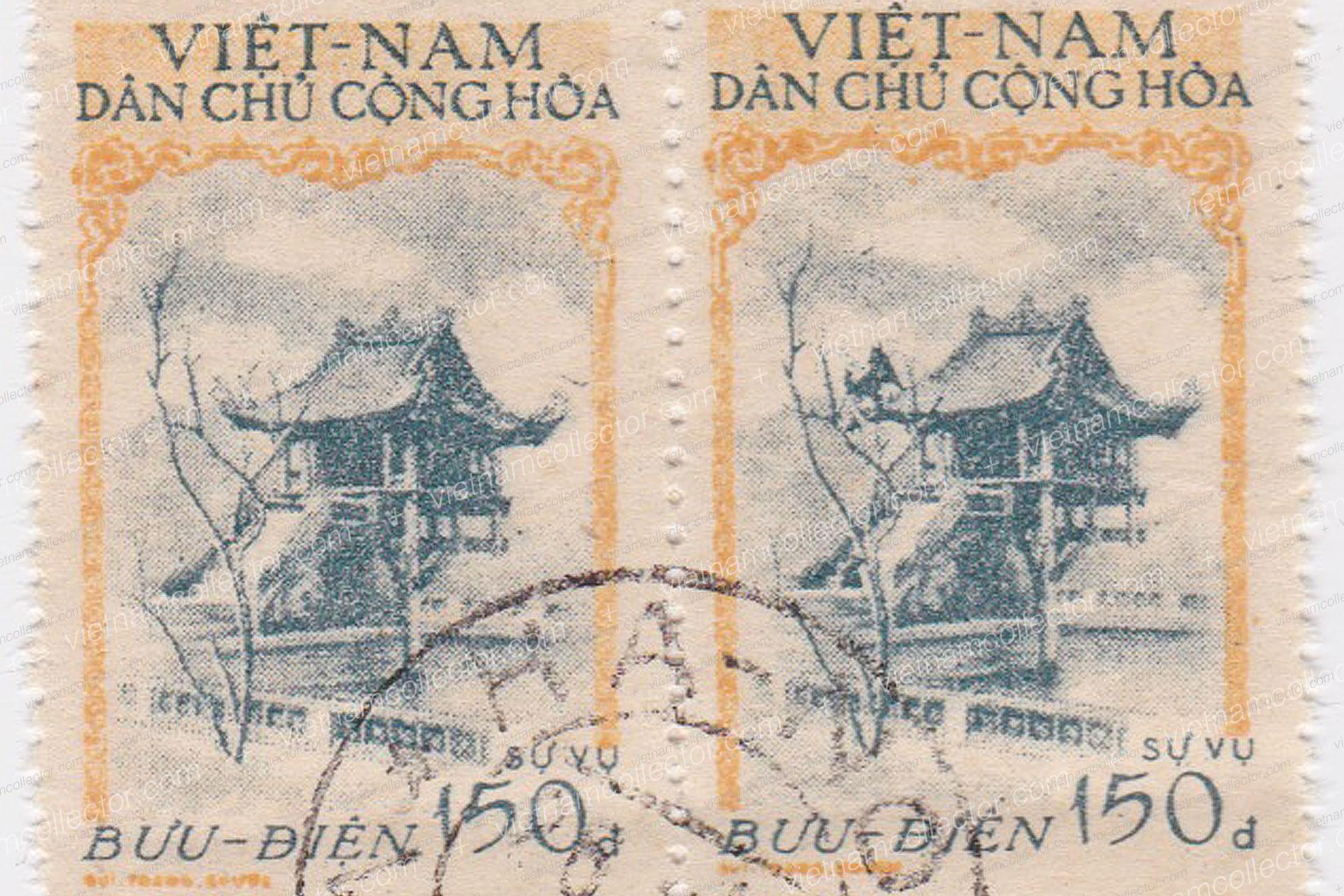 North Vietnam; Mot-Cot Pagoda, December 22nd, 1957 (green frame), March 12th, 1958 orange frame, Michel Nr. D21-22; On December 22nd, 1957 the Democratic Republic of Vietnam published a new service stamp denominated 150 (new) Dong in the colors blue-green /brown. According to the Michel catalogue this was on account of an increase in postage for a standard domestic letter in early December 1957 to 150 Dong (Michel Suedostasien 2018). In April 1958 another version in orange/dark grey green of this stamp was published for unknown reasons.

One can only surmise that the color contrast of the first issue was hard to see and hence postal authorities used a clearer color combination for the second one. Michel states that the perforation of the issue is 12.5 and the Vietnamese Postage Stamp Catalogue indicates the perforation at 13.0. So, the editor measured all of his stamps and found that the stamps come in 12.5 and 12.75. No 13.0 stamp was found however. The 12.75 perforation appears to be more common. Sheets contained 100 stamps. 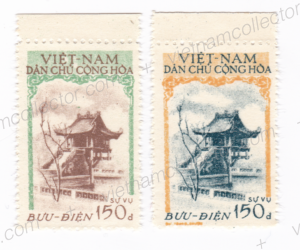 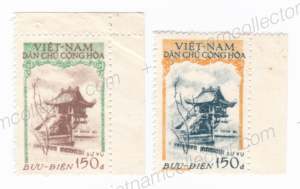 These are mint blocks of four, both perforated 12.75. The green framed block is missing the designer name and the orange framed frame does show the name of the designer. 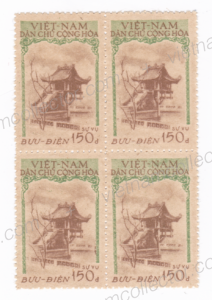 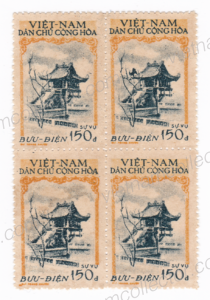 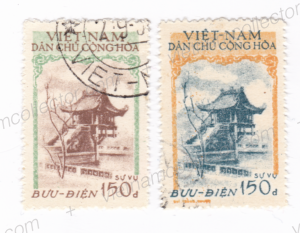 Postally used stamps are a lot rarer. This is the orange framed stamp perforated 12.5 showing the name of the designer. 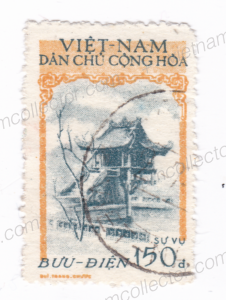 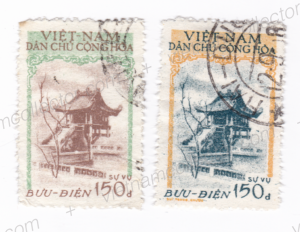 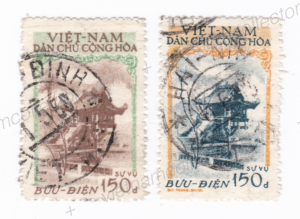 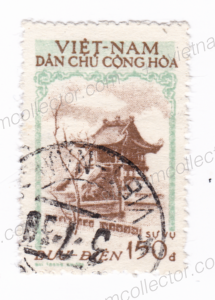 Initially it was thought that stamps with the missing designer name were caused by an intentional plate setting on different print runs. However, recent studies have shown (Duering, SICP, 2017) that it is most likely caused simply by wear and tear of the printing plate as stamps have been found that show only a partial fragment of the designer name as on the stamp below. This makes sense as the same plate was used to print both frame colors resulting in a lot of plate wear over time.

A re-occuring plate error occurs in the same spot for both color printings. It looks like a dark flag that is attached to the roof of the pagoda. Here are blocks of four (both perforated 12.5) that show the error on the top right stamp. 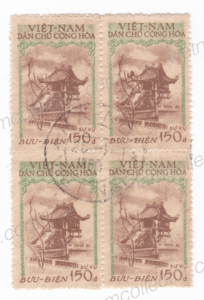 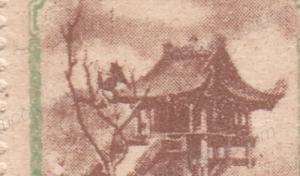 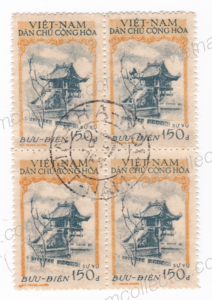 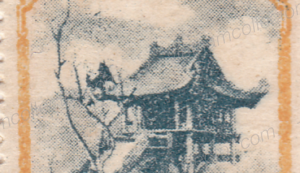 The field in question is E6 (or the 5th row down and the 6th stamp as seen from the left). Since the error appears in both printings it is a clearly a plate error and not an accidental printing flaw, as obviously the plate would have been cleaned in-between printings, hence removing any small errant objects that may have fallen on it. What is not known at this time is if the first print runs on the first issue already showed this plate error right from the start or if it occurred well into printing the first issue. If you have some complete sheets of the blue-green/brown stamp please take a look and see if you can find a sheet that does not show this flaw on field E6. That would be an indication that the error is only present on parts of the first printing. Given that the error only appears once per sheet it is obviously at least 100 times rarer than a stamp without it.

Since it was prohibited to remove stamps or envelopes from Government offices complete letters with service stamps are exceedingly rare. Most of the surviving specimen are letters that were sent abroad and that then were collected there. Here is a letter sent by the Committee of Catholic Vietnamese in Hanoi to the General Secretary of the Christian Democratic Union Party (Gerald Gotting) in Berlin, Germany. It carries a very rare multiple franking of the 150D value with the green frame in perforation 12.5. Both stamps do not show the name of the designer. 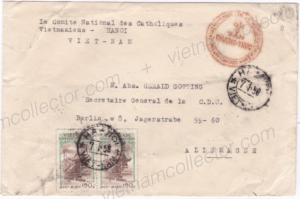 Very rare local letter mailed on March 17th, 1958 within Hanoi franked with a single of the 150D green frame (Perf. 12.5) without the name of the designer. 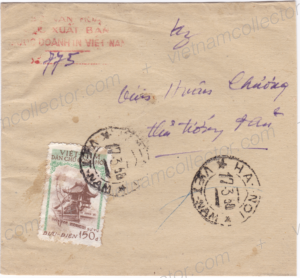 Letter with one of the orange framed stamps  to Klewitz in West Germany. The cover also is an interesting mixed currency franking of old and new Dong and a mixed franking of service stamps (Mot Cot Pagoda issue) and regular stamps. It is not quite clear how the sender obtained the service stamp as their distribution was limited to Government Bodies, foreign embassies and NGO’s (like the Red Cross for example). The 200 Dong in pre March 1959 stamps were devalued 1,000:1 which meant that in 1965 thew were worth 20 xu. The overall franking hence amounted to 1.12 Dong which is just a whisker above the required tariff of 1.10 Dong for a standard registered letter to Western Europe. 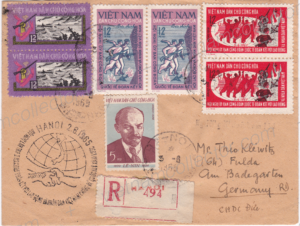 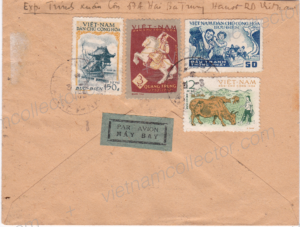 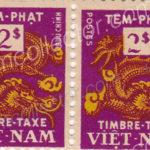 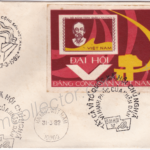