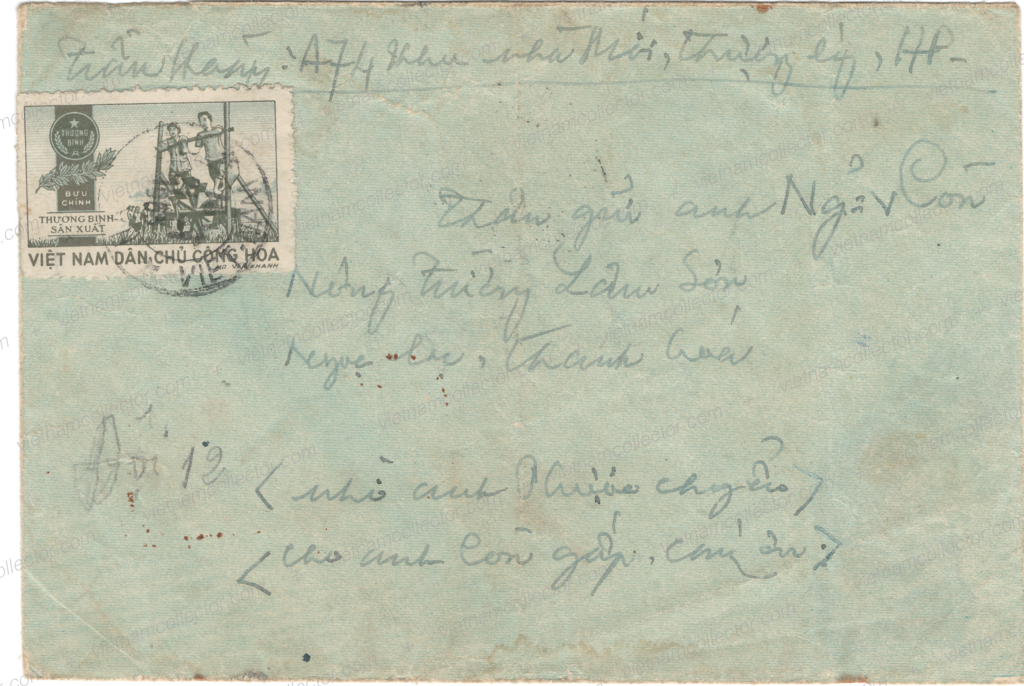 In March the official Government authorized vendor of Vietnamese philatelic stamps, published an information bulletin to dealers worldwide announcing the publication of a stamp showing no denomination.

The stamp was „released for free post for disabled soldiers“ and the printing run indicated that 1,000,000 copies were produced. The official Vietnamese stamp vendor So Xuan Nhap Khau Sach Bac indicates that the stamp was released on March 14th of 1959. The colors it was printed in was brown-olive. Here is a mint copy of the stamp.

There appear to be two printing runs of this stamp. On the one above the emblem shows a lighter brown and the ear in the center is fuzzy.

While on another printing run the emblem color is of a darker brown and the ear in the middle is much sharper:

According to a Xunhasaba bulletin produced in July of 1960 a stamp in identical design, but released on July 7th, 1960 but in the colors brown-olive/grey-green was also released in a quantity of 1,000,000.

Here is a sample of the mint stamp.

The primary intent of both stamps was to provide a social benefit to Vietnamese veterans, by handing over, quarterly, a number of free copies to eligible persons, free of charge. The stamps could then be used for a standard letter within Vietnam[1]. Michel and Scott catalogue the stamp under the designation M3 I and II and M3. Of course the official vendors made sure that the philatelic market was provided for, by offering individual mint stamps at 0.03 British Pounds (Exchange Rate used at the time was 10 Dong = 1 British Pound) with discounts for ordering 10 or even 100 copies. Interestingly, used (CTO) copies were offered at lower than the mint rates but one had to order a minimum of 10 copies for 0.10 British Pounds.

International letter franked with one 1959 Free Frank (First Printing) and one National Assembly stamp (12xu) sent to Klewitz in July of 1960. While Fulda was clearly in West Germany the sender indicated that it was located in “East Germany”confusing the postal clerk in Vietnam which qualified the letter for a 12xu tariff (West Germany would have cost a base rate of 50xu). Free Franks were not valid for international mail so either the Free Frank was simply cancelled as a favor or the letter was of the second weight level and hence two 12xu stamps were required.

Very rare international letter sent from Hanoi to East Germany. While the veteran free franks were not valid postage for international mail the postal clerk clearly had no issue in accepting the stamp on this international sending and no postage due marks were made. 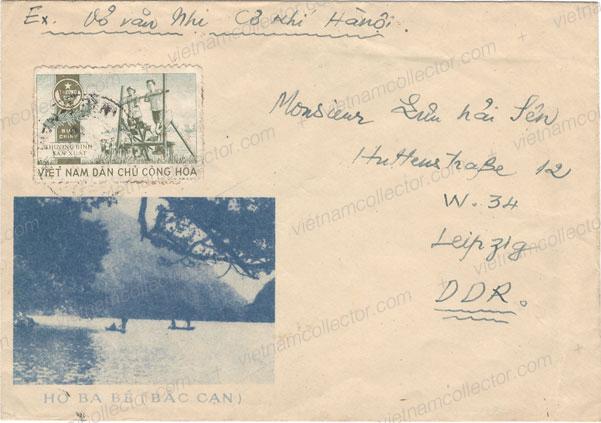 The stamps are not particularily rare, though mint copies are somewhat scarcer than copies cancelled to order. However, on cover and postally used, the story is very different. It is quite a challenge, but not impossible, to find a genuinely used copy or a complete letter sent by a beneficiary. This has to do with the fact that most local letters (on which these stamps were used) were destroyed in the multi-decadal war, the tropical climate or recycling due to raw material shortages.

Here is a very rare local letter using the brown stamp from Nghe-An to Hanoi in April of 1959, so shortly after issuance. 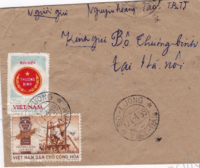 Very rare mailing featuring a mixed franking of the Fruits, 30 Years Communist Party and the brown Water Wheel stamp on a letter sent in January of 1960 from Hai Phong to Czechoslovakia. The veteran free frank was not valid postage for international mail however, this fact, appears to have been missed by a number of local postal clerks who accepted the stamp on international mail. 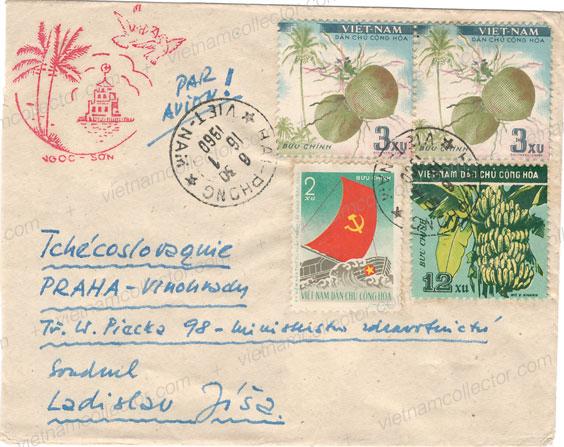 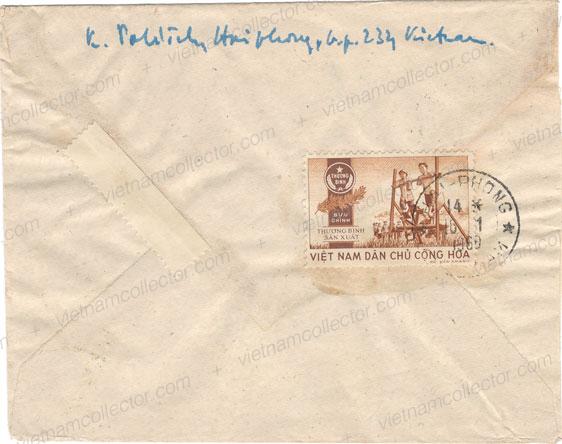 The most interesting story about the green stamp though is the fact that a slighlty different version of it appeared later on in the philatelic market. In the SICP Journal 109 from October 1991 Klewitz states that the second version was issued on July 7th 1960 but no official release publication has ever been found. The publication of this changed stamp design was not reported by Xunhasaba and it is not included in the Vietnamese stamp catalogue. In this version, the invalid badge on the top left shows the star and the grain heads in the same green-grey color as the laurel leaf below the badge. In the first print, these were left white. Here is the exceedingly rare mint copy (only 3 mint stamp are known to date).

Based on the editors personal daily observation of the international stamp market (E-Bay, Delcampe, Private Auctions) virtually all existing copies of this stamp variety are offered cancelled to order. In that state (CTO), the stamp is only slightly rarer than the original version with the white symbol and hence mass market material. Michel catalogues the revised design as M3 II but only lists prices for mint and postally used copies (€60/€150). CTO cancels are not listed for this stamp, though that would make a lot of sense so that less discerning collectors do not end overpaying for a CTO version that is at most worth $2. As we all know, dealers are known to use the highest price in any catalogue regardless if the stamp actually qualifies for such price.

Because the stamp is 99.9999% of the time offered in the CTO version with a Hanoi canceler, with the typical strike of the cancel over a block of four, it is the author’s belief that the changed design was basically produced for Xunhasaba to satisfy the additional demand of the stamp package trade. Here is the standard and easily obtainable CTO version with the typical Hanoi cancel struck across four stamps.

Apparently, interest in this stamp was so great as to warrant a second printing. The large majority of reprinted sheets were apparently cancelled immediately after printing and then sent out to dealers who could order 1,000 or more copies for inclusion in the then popular stamp packages. This was quite standard in the 1950s and 60s in other communist countries, such as the People’s Republic of China, that used its stamps for the generation of hard currency. In those cases, it was also typical to slightly alter the design of the stamp so that original print runs and reprints could be distinguished; though this is the first time this practise has been observed for North Vietnam.

Of course, once the editor was on to the reprint he began searching for a mint, postally used or a copy on commercial cover. The decade long search produced only meager results. The author was aware that a mint copy did in fact exist in the former Klewitz  collection so it was clear that at least a very limited quantity of the stamp must have been released in the mint version. 2016, he finally saw one on offer from a Vietnamese vendor and was able to acquire it after spirited bidding action on E-Bay. Clearly, a few other buyers were on to the mystery as well! However, after all the searching on Internet stamp websites, private auction houses or in private collections, so far, only three mint copies and six postally used copies (four of which are on cover) can be reported. Here is the one of the four covers the author was able to acquire over time.

Here is the second postally used cover (acquired from there Klewitz Collection) featuring the reprint sent on October 16th, 1961 from Hanoi to Ha-Nam. 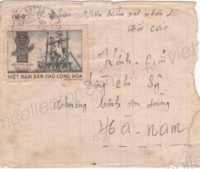 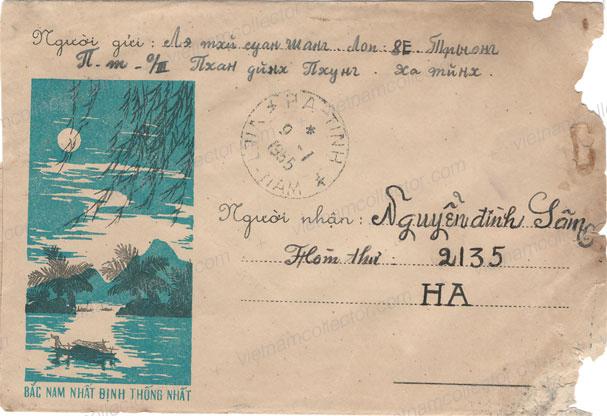 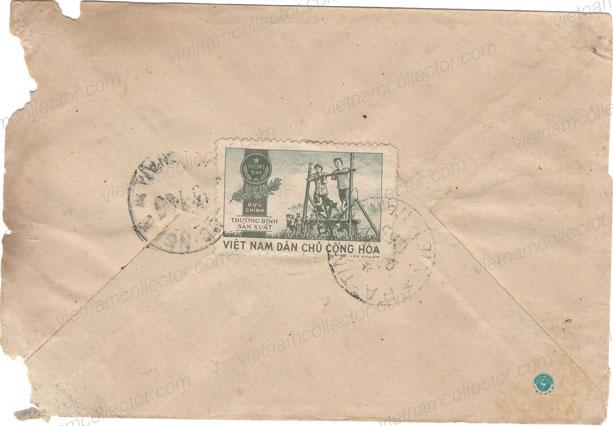 The other specimens on cover are owned by members of the Society of Indochinese Philatelists. Two postally used copies off cover have been reported to the editor. One is in the possession of a SICP member and the other was contained in the Khai collection but the whereabout today is not known. Please let the editor know if you have any mint or postally used specimens of this variety. While for now the stamp is presumed to be one of the most rare ones ever issued by the Democratic Republic of Vietnam, it could, of course, be that other copies are slumbering unrecognized in other collections. 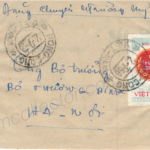 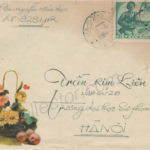