North Vietnam, Handicraft Fair in Hanoi (1st Series), May 30th, 1958, Michel Nr. D23-24; To promote the fledgling industrial production two official service stamps were issued in the denominations of 150 Dong and 200 Dong. Michel reports the perforation at 12.5 while the Vietnamese Postage Stamp Catalogue indicates 13.0. The editor measured all his stamps and found that most of them were indeed perforated 12.5 but a pair was perforated 12.75. No 13.0 stamp was found however. Perforation holes were very small though which resulted in generally poor perforation on this issue. Well perforated stamps deserve a surcharge. The stamps were issued in sheets of 100.

Here is a mint set with top selvage perforated 12.5.

Virtually all used stamps are cancelled to order like this set perforated 12.5.

Postally used sets like this set, perforated 12.5 are very hard to find. This had to do with the fact that it was prohibited for Government workers to take stamps or envelopes home. So surviving specimens usually come from envelopes that were mailed abroad and collected there. Postally used stamps are wort at least twenty times that of CTO stamps.

This is a very rare error of the 200D stamp. The stamp is printed on both sides. The front side shows the normal image of the stamp, while the back shows only the orange color (right side up). 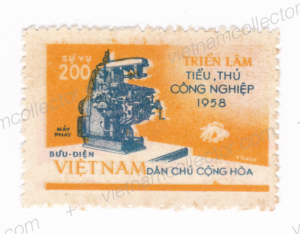 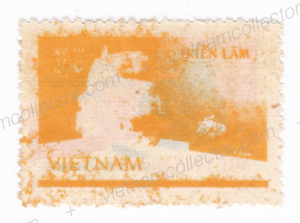 Postally used letters are exceedingly scarce for the reasons described above under postally used stamps. Here is an envelope that was sent from Hanoi to the Ethnographical Institute in Moscow (Soviet Union) and that carries both stamps of the set for a total postage of 350 Dong. Moscow arrival cancel on the reverse. 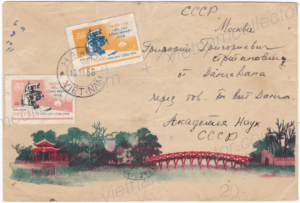 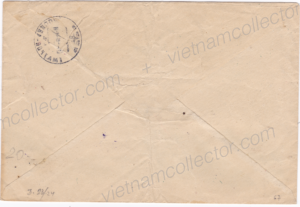 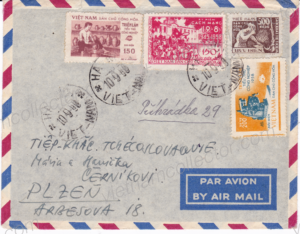 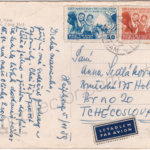 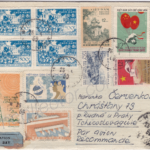