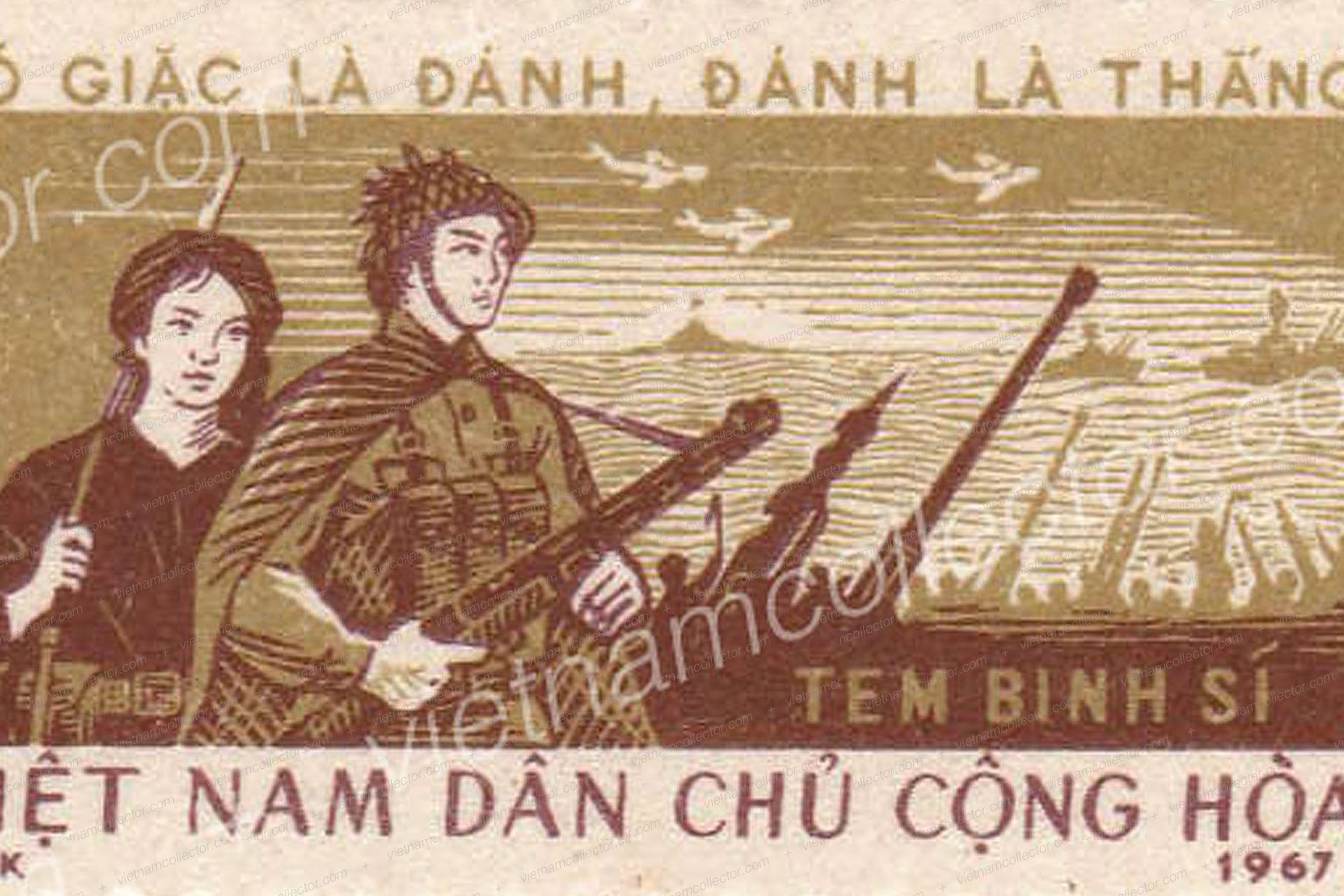 The North Vietnamese Postal Authorities issued so called “Free Franks” that were distributed to members of the military free of charge on a monthly basis. The stamps were good for a standard domestic letter of up to 20g for surface mail. Letters sent by air mail had to carry two of these stamps. Also, additional services (i.e. registered letters) had to be up-franked to match standard surcharges. The stamps were only valid inside the country but this was apparently not well known, even to postal personnel, as letters to foreign countries with these stamps were in fact transported and sometimes without any indication of a penalty.

A particular stamp design that depicts a soldier and a militia woman in front of various weapon outlines, airplanes and a ship was used a total of three times. The first stamp in turquoise blue/blue-violet issued in 1966) – Exhibit 1 – and the third stamp in olive-green/brown (issued in 1969) – Exhibit 2 – were identical in design. The red-brown/olive-brown stamp that was issued in 1967 (Exhibit 3) showed a slightly different design as the people in it were drawn differently and the back-ground shows two boats. Also the stamps 1966 and 1967 show the issue year at the bottom right of each stamp. The stamp issued in 1969 did not show a year.

Generally it is not very difficult to locate two of these stamps off cover. Specimens cancelled to order are the most plentiful and can be had for as little as a Dollar each. Mint specimens are harder to come by which probably has to do with the distribution method of these stamps. One could not simply walk into a post office and buy them but they had to be given to you within the military. This also explains why any multiples of these stamps (other than the CTO versions distributed to stamp dealers and collectors) are fairly rare. Most stamps were simply separated from each other as they were handed out to the staff. Nevertheless, even in the mint version, single stamps issued in 1966 and 1967 (Scott M11 and M12) can usually be bought for under $10 each. The olive-green/brown stamp (unlisted in Scott, Michel lists it as M16) on the other hand is another matter. It is rarely on offer at all and Michel lists a price of €200 for mint and €250 for used. Why this stamp is so much rarer is unknown to the author, but clearly much less of them do exist as evidenced by the lack of market activity. So, if one were to produce fake stamps one would clearly target the olive-green/brown stamp. This, however, is not what is happening so far.

A fairly well known purveyor of Vietnam and Indochinese fake stamps located in Taiwan and selling on E-Bay has, for a few months now, offered fake and fantasy versions of the 1967/1969 design version. The color of the fakes is very different from that of the originals (see Exhibits 3 and 4). They are printed on yellowish or brownish paper (the originals are on white paper). Also, the date of issue on the fakes is given incorrectly as “1971” at the bottom right. There is a slightly different version of the counterfeits which does not show any year of issuance (Exhibit 5 and 6). The singles of this version are sold imperforated and are on smooth, white paper. An imperforated souvenir sheet version is printed on rougher, brownish paper. The perforated stamps (both originals and fakes) show perforation 11. The appearance of the design is much crisper/clearer in the originals than in the forgeries which is not surprising as the fakes are simply photo copies of original design which in the process lost some detail.

So, overall these fakes/fantasies should not fool most collectors for now, however, they can become a problem once forgeries in the original color, design and paper are being produced. None of the forgeries is marked as such by the vendor, so miss-using them would not be too difficult. The biggest problem here could be that forgeries in original color/design could be used to produce counterfeit military mail with these stamps and that is exceedingly rare and so expensive. By the authors estimate and based on his market observation in the past 20 year, less than 10 original letters bearing any of these stamps on postally used military covers survive today. They rarely ever come to market and if they do, they tend to command prices upwards to $500 a piece. So make sure to inspect any potential purchase of these stamps on cover in great detail. 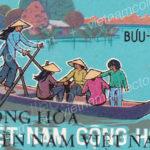