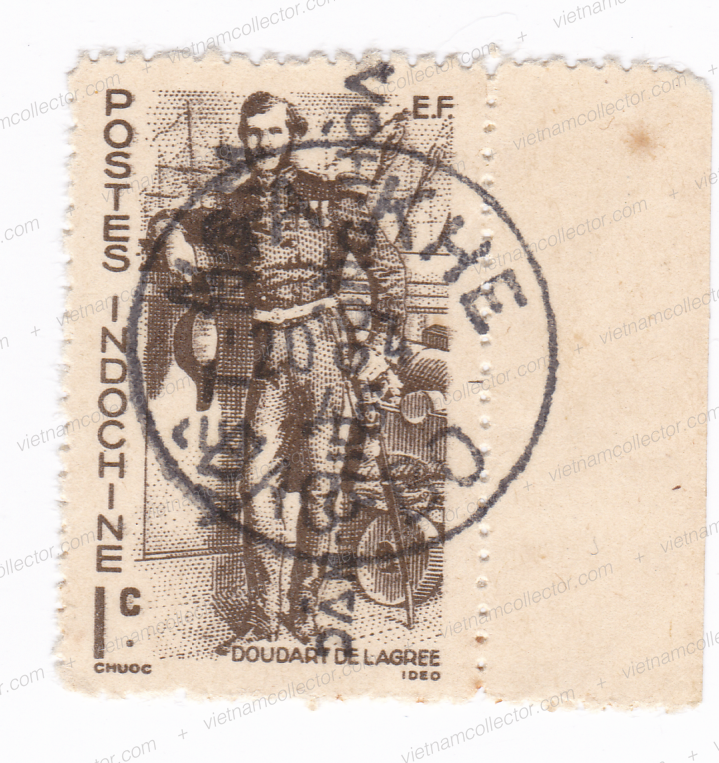 While many Vietnam collectors are familiar with the extremely rare local Ho Chi Minh stamps issued in South Central Vietnam between 1950-1954, and those stamps (and their forgeries) have been extensively described in various SICP Journals, nothing has been written  about the equally rare local stamps issued in Nga Khe. But before we delve into the subject, let us set the historical context for when these stamps were issued.

After the defeat and surrender of the Japanese in September 1945, British and French troops landed in Saigon on September 12, 1945, establishing limited control in the city. But it was not until later on, that month, that full control of Saigon and surrounding areas was regained from the Japanese that were still concentrated in the area, waiting to be disarmed and repatriated to their homeland.[1] The French intent was clearly to reestablish control over all of Indochina at the end of the war, but of course that would take time.

However, in the meantime, Ho Chi Minh had used the temporary power vacuum to declare Vietnamese Independence on September 2, 1945 in Hanoi and he was working with his American allies to gain recognition of the Democratic Republic of Vietnam[2]. America had turned to Ho Chi Minh as an alternative to French intelligence, that was eliminated after the French were imprisoned by the Japanese in March of 1945. The Viet Minh were not the only group in Indochina with a claim to power. After the Potsdam Conference in July of 1945, Indochina had been divided at the 16th parallel, with British forces responsible for the South and Chinese troops responsible for the North. With the Chinese troops under Chiang Kai-Shek entering the country also in September of 1945, hundreds of anticommunist nationalists were returning from exile. These included supporters of the  Vietnam Nationalist Party and the Revolutionary League. The situation was, therefore, rather messy so the Chinese Nationalist occupiers finally forged a national unity Government under the leadership of Ho Chi Minh/Viet Minh, that also included the right wing Nationalist Party and the Revolutionary League. This Government came into existence in early 1946 just as the French, having returned to the south, were preparing to re-enter the north.[3]

From a postal point of view, the Viet Minh, had already prepared for leadership by overprinting existing Indochinese stamps with Viet  Nam Dan Chu Cong Hoa/Democratic Republic of Vietnam (Scott 1L1-1L31)in November of 1945[4]. Given the extreme raw material shortage at the time, this was a rational and practical thing to do. However, with the difficult economic and political situation at the end of 1945 and in early 1946 challening the new administration, these stamps were initially not widely distributed and basically only available in the Hanoi area for a while. While word of the new Government formation had reached other parts of the North, the stamps had not. So, officials of the post office at Nga Khe, in Phy Ly province, took matters in their own hand. Instead of continuing to use the stamps of the hated French Indochinese Regime, that were officially still valid,  they created their own „Viet Nam Dan Chu Cong Hoa“ overprints in January of 1946 to document their new national pride. Former SICP member Theo Klewitz discovered these stamps and reported them to the Michel catalogue[5]. No other catalogue lists these stamps to-date, which probably explains why so few collectors are aware of them. So far, the following Indochinese stamps with the genuine local overprint have been identified (all numbers by Michel):

While the overprints were never authorized by Hanoi prior to their release, they clearly can be considered as legitimate since they fulfilled a local need in changed political circumstances that, given the chaotic conditions in the country at the time, simply could not yet be fulfilled by the new Central Government. The stamps were postally used on letters originating in Nga Ke as of January 1946 and they were accepted as valid postage in other parts of the north. Genuine covers that travelled through the mail from January through April of 1946 are great philatelic rarities with museal character, as most of these letters were either lost or destroyed in subsequent years. Even the loose stamps are very rare and only occasionally come up for sale. Their existence is probably attributed to the fact that Hanoi outlawed the use of any Indochinese stamps without overprints created by the Central Government after April 20, 1946 (which is also a tacit agreement that the stamps were legitimate when they were issued). The officials in Nga Khe therefore decided to cancel all remaining locally overprinted stamps on that last day and sold them into the philatelic market.[6] Therefore, these stamps off cover are basically only known with a centrally placed Nga Khe cancel. Below are eight of the nine Nga Khe stamps that show the genuine overprint along with the genuine Nga Khe cancel that is also found on postally used covers. 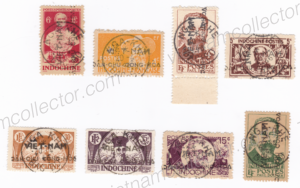 Of course, as is typical for Vietnamese overprints, after Klewitz had informed the philatelic community of these stamps, forgers got into action. They produced reprints, which differ in various ways from the originals. The easiest way to determine an original from a forgery is by looking at the „N“ of „Viet Nam“. In the originals the diagonal line of the „N“ ends approximately in the middle of the second vertical of the „N“ while in the forgeries it ends at the bottom of the second vertical . 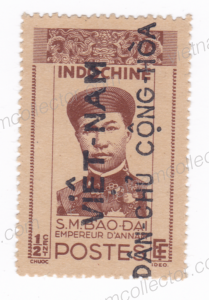 So far all mint Nga Khe overprints have turned out to be forgeries.

The „A“ in „Dan“ and „Hoa“ in the originals looks like a triangle slightly open at the bottom left, while the „A“ in the common forgeries has the horizontal line in the center of the „A“. Finally the ink used in the overprint of the originals has a slight fuzzy and lighter appearance as it was soaked up differently by the paper. The reprints appear much bolder and with clearer outlines. The cancel of the reprints, is in most cases, also different from the originals. The original cancel does not show a circumflex (a triangle open at the bottom) above the „E“ in „Khe“ while the forgeries do. There appear to be at least two different cancels used on the original overprints, though. Both are missing the circumflex but one cancel has a closed „4“ in „46“ while the other has an open „4“, however this could also simply be a matter of how strongly the cancel was struck, as the top part of the vertical line of the „4“ is weak at best. 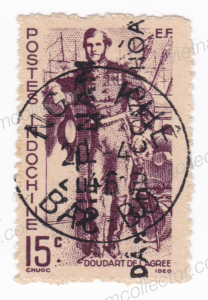 Recenly the author has located a stamp that on it’s face looks genuine . The „A“ in „Dan“ and „Hoa“ looks identical to the originals, as does the color and outline of the overprint. Also the cancel is the same as can be found on the originals. However, the „N“ in „Viet nam“ clearly has the characteristic of the reprints (diagonal line ends at the bottom of the second vertical). This may be evidence of a new, more dangerous forgery, as it is unlikley that the small place of Nga Khe prepared two different overprint types. The small postal volume in this village would simply not warrant that. The author would be greatful for input and comments you may have on this newly found variety. 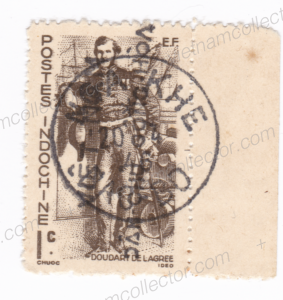 Beware of unused specimens. No genuine unused specimens are known to exist as the stamps were all used up. Also beware of  Indochinese stamps, other than the ones listed above, that carry the overprint. While theoretically possible, they would have to show the correct charcteristics in overprint and cancellation described herein to pass muster.

Another forgery is now marketed by a seller on E-Bay. It basically consists of a photo copy of an original stamp with original overprint and cancel. There are no markings on the back of the stamp that identify it as a forgery. It is easy to spot though as the forgery shows the typical washed out colors on the stamp image and cancel that is typical for photo copies. It also printed on snow white paper while the originals are printed on yellowish paper. Finally the forgery is perforated 13.75 while the originals are perforated 11.25-12. 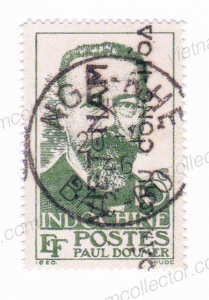 Michel has valued these stamps at €50 for the longest time. This stems from the fact that these stamps are very rarely offered, often trading hands in private sales from one collector to another and that just does not provide enough data points to establish a current market price. Catalogue makers are also hopelessly above their heads in keeping catalogue values updated as they simply do not have enough staff to analyze all public auction sales. You can see this on a daily basis on E-Bay where actual sales prices often differ greatly from catalogue prices. Expect to pay between $350 to $500 for a genuine Nga Khe specimen off cover. For a postally used cover $2,500 to $3,000 certainly would not be a too high of an ask. Also, if you want to collect a „complete set“,  you have to be very patient. The author has had an eye out for these stamps for the better part of 20 years but is still missing two values.

[2] A History of the Vietnamese, K.W.Taylor

[3] A History of the Vietnamese, K.W.Taylor

[5] as per SICP member Frank Duering

[6] as per SICP member Jean Goanvic 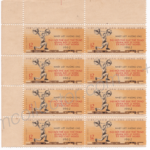 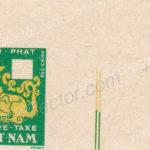