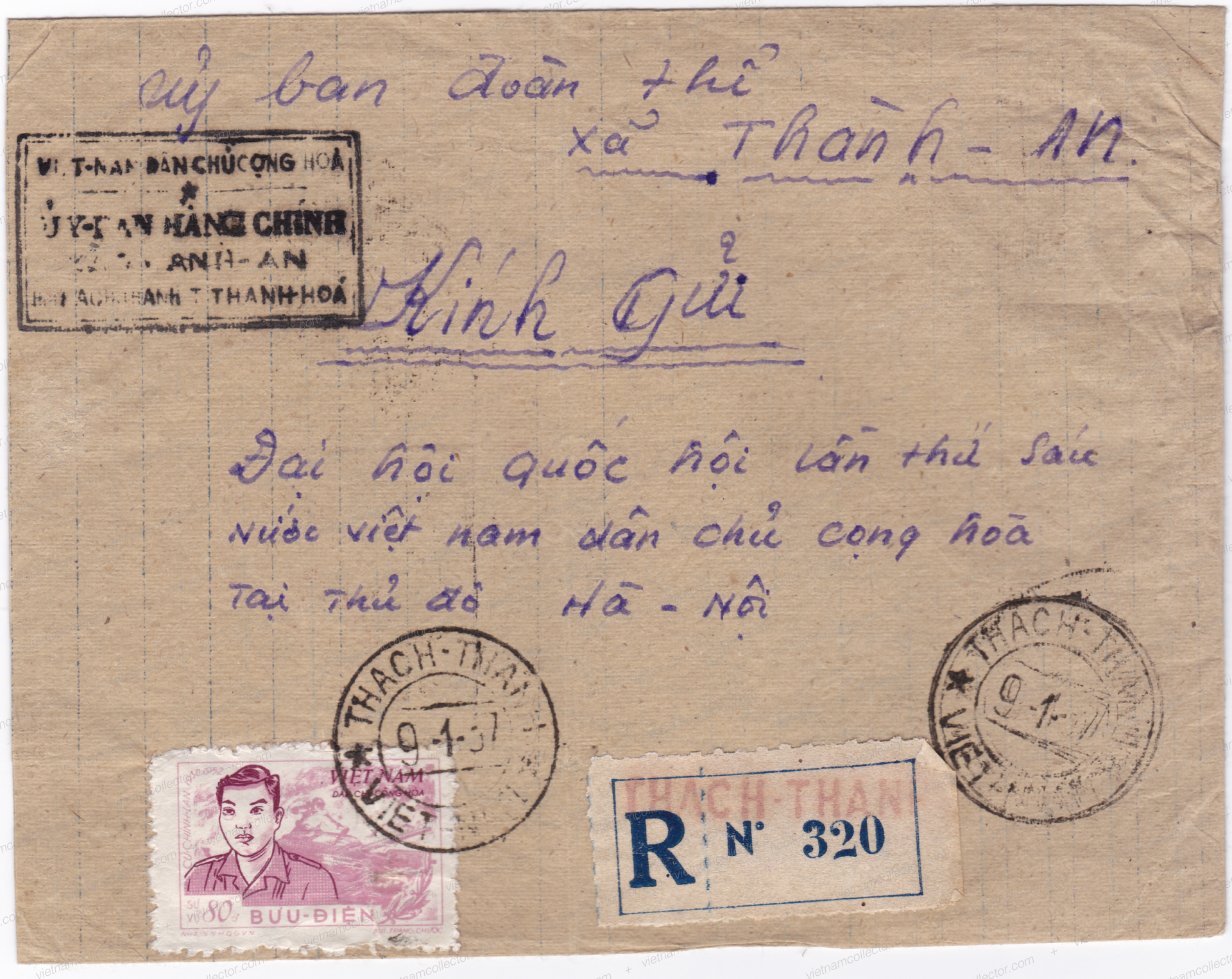 North Vietnam, Cu Chinh Lan, Service Stamps, June 1956 (Michel Nr. D10-16); In order to facilitate official mail from one Government office to another the postal authorities issued service stamps that were not available to the general population but were sold to collectors overseas. The set issued in honor of Cu Chinh Lan featured seven values in the denominations of 20D, 80D, 100D, 500D, 1,000D, 2,000D and 3,000D. The Vietnamese Postage Stamp Catalogue reports that nominals up to 500D were issued in a confection of 196 stamps to the sheet, while the highest values (1,000-3,000 Dong) were issued in sheets containing 100 stamps. The standard letter rate at the time was 80 Dong which means that this value had a number of print runs resulting in different color schemes for that particular stamp as listed by Michel. It is not clear why the rare large nominals were necessary for official mail but they may have been designed for packages of files exchanged by the various offices. This issue comes in various states of perforation. Some of the production was very clean and has neat perforation while others appear roughly perforated. Th rough perforation is either the result of trying to perforate too many sheets at the same time or perforation combs that are too short for the task. Here is a mint set in perforation 11.5.

This is a are mint set in blocks of our. 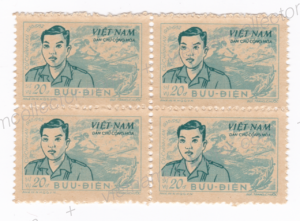 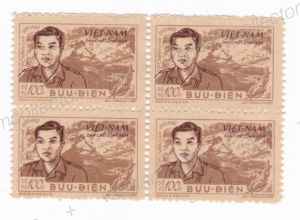 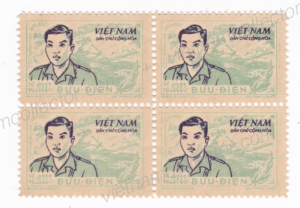 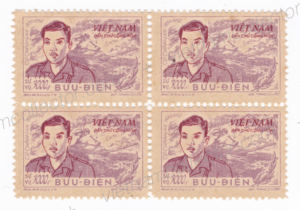 There are some clear color difference on the 20D value but the editor thinks that they are more a function of the degree of saturation of color rather than really different colors.

Michel reports a total of four different colors of the 80D value (lilaq-rose/dark-lilaq; rose/dark-lilaq; rose-orange/brown-red; light-rose-orange/light-brown-red) but the editor has difficulties to confirm these various colors that were reported by Klewitz to Michel. Certainly the last two are probably just a function of color saturation. If not, the above example of the various color on the 20D value would also justify a new catalogue entry. At any rate here are the various color shades the editor has on file of the 80d value. None of them matches the description in Michel and this by using the official Michel Color Guide! The colors match more closely light-red-carmine/vivid-carmine than any of Michel’s listed colors. The only way to determine if these are really of different color would be by employing a professional color-spectrometer but the editor does not have access to such an expensive machine.

The editor is not aware of any errors on this issue. Sometimes crafty sellers will offer color “kisses” like the one below on the back of the 3,000D value as errors. Don’t fall for the ruse. These “kisses” occurred fairly frequently when still wet printed sheets were stacked on top of each other leaving some paint residue as a mirror image on the back of the stamps. One can of course collect them but they are not worth more than a “normal” stamp. 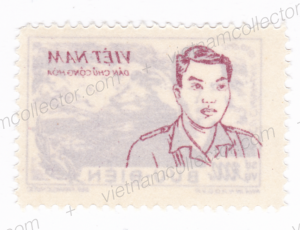 Since mail went from office to office and it was prohibited to take envelopes home, most of the used stamps were either destroyed upon receipt or later on when the envelopes that ended up in Government archives were raided or destroyed in the decade long war that had befallen the country. Therefore, the most likely way to get these stamps in used condition is to obtain a cancelled to order set as the one below. These were sold by the State Philatelic Agency Xunhasaba at a discount to the face value to stamp dealers.

Cancelled to order block of four of the 20D value 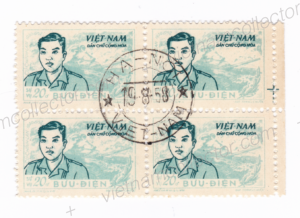 Actually postally used specimens are very rare as they only could survive when a Government worker took these stamps illegally or the mail was sent abroad and the stamps were collected there. As a result they are pretty rare. The most likely value to survive is the 80D one as it was used most often. Here are all the  postally used stamps the editor was able to collect in over 25 years of collection activity. Witness the different shades of the 80D value.

Most of the surviving mail with service stamps was sent abroad. Xunhasaba, the official philatelic stamp marketing agency of the Government was authorized to use service stamps but they often used mixed frankings of service and standard stamps as shown below. Here is a printed matter mailing using a single of the 20D service stamp among other early NVN stamp. Note, that the bulletin that announces the issuance of the Red Cross stamp of 1961 (Michel Nr, 164-65). The franking is a mixed currency franking of old and new Dong. Remember the old Dong was devalued 1,000:1 on March 1, 1959. This means the total franking here totals 520 old Dong /1,000 = 0.52 New Dong or 52 Xu plus the stamp of 30 Xu for a total of 82 Xu. 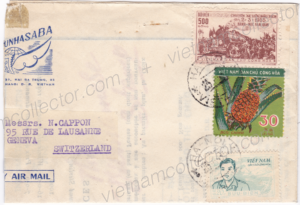 This is a similar printed matter mailing from Xunhasaba announcing the same Red Cross stamps in 1960. 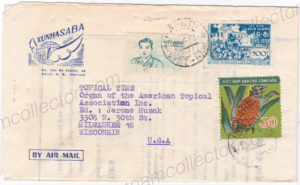 December 1958 mailing of the philatelic department of this State owned publication company that represents the official stamp bulletin for the Jade Tempe series. The printed matter is franked with the 20D official Cu Chin Lan stamp plus two official stamps from the Country Defense issue from 1958 for an overall postage of 370D. 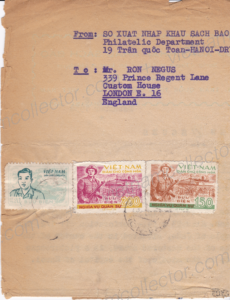 Very rare official letter sent in 1957 to the Editor of the World Radio Handbook in Hellerup, Denmark. Denmark was a very scarce destination in the late 1950’s. The letter is franked with a block of four of the 80D Cu Chin Lan stamp (light-brown-red/lively red-brown according to Michel Color Guide) for an overall postage of 320D. 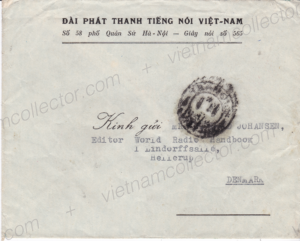 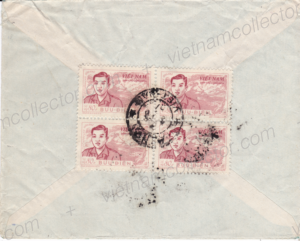 This is the reverse side of a printed matter mailed by Xunhasaba to an English stamp dealer consisting of a bulletin that announced the issuance of the stamp for the 8th anniversary of the Geneva Agreement on July 20th, 1962 (Michel Nr. 223). Ir carries a Hanoi-Berlin red hand stamp in the front indicating that it was transported on a direct flight route from Vietnam to East Germany. It is franked with a single stamp f the 100 old Dong value which at the time was worth 10 Xu. It also carries a  block of six of the 12 Xu “Fruits” stamp from 1959 (Michel Nr. 111) for a total postage of 82 Xu. 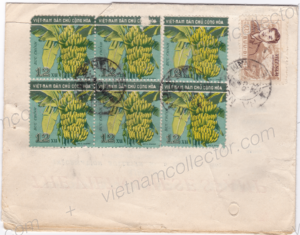 Mailing of another state owned enterprise that was involved in the distribution books and periodicals to London, England. Letters to England in the late 1950’s were very rare. The letter carries a mixed franking of standard and official stamps. In this case a pair of the 300D Dam stamp (Perf.13.0) and the 500D Cu Chin Lan stamp was used for an overall postage of 1,100D. 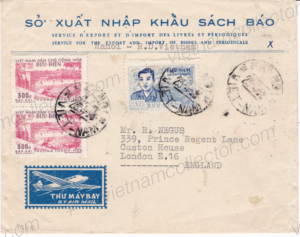 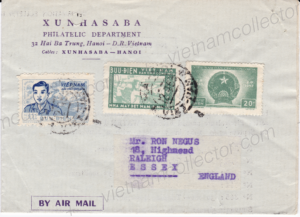 Very rare piece, probably from a large envelope sent from University in Hanoi as “Printed Matter” to the Ethnographical Institute (Academy of Science) in Moscow in the Soviet Union. The top left cachet is from the Vietnamese customs office. At that time even outgoing parcels were inspected (Ta Phi Long, 2018). It carries the two largest and hence rarest values of the official set of 2,000D and 3,000D. Sent in November, 1956. 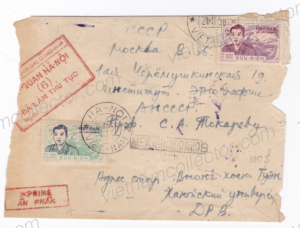 Local official letters rarely survived. The only specimens the editor knows are all ex Klewitz. Klewitz had a high level political contact in the North Vietnamese Government that supplied him with unusual mail pieces. As a senior Government official he probably felt unencumbered by the prohibition to take inter-office mail envelopes. Klewitz did not speak Vietnamese. He therefore worked closely with the East German linguist Gregor Schwirtz who did. Schwirtz was also a prolific collector of Vietnamese stamps and obtained the following pieces from Klewitz.

About this piece Schwirtz wrote: Service Letter to the Government from December 28th, 1957. Additional 50D standard stamp (note the deep dark color of the 20D service stamp). An increase in the postal tariff at the end of 1957 for local letters (even Official Mail) to 150 Dong caused a shortage of suitable nominals and therefore standard stamps were used in mixed frankings.” Given the abbreviated address this letter probably just traveled inside the city of Hanoi. Hanoi arrival cancel on the reverse. Very rare! 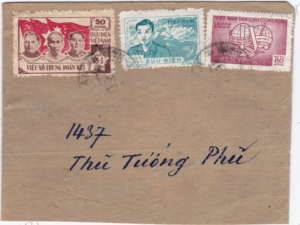 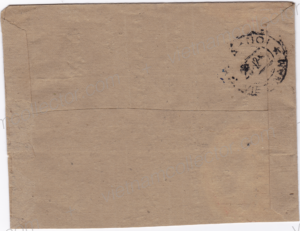 Another piece (ex Klewitz/Schwirtz). This was Schwirtz’ comment: “Official Letter from Hai-Duong, June 30th, 1956. Due to an increase in the postal tariff mixed franking with standard stamps; Rare”. Carrying a single 80D service stamp and four 10D stamps of the Agricultural Reform set. Transit and arrival cancels on the reverse. 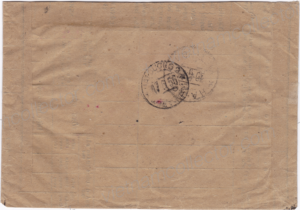 Here is another ex Klewitz/Schwirtz letter. Schwirtz comments: ” Sender: Administrative Committee of Than An, District Thach Thanh, Provinz, Than Hoa. Registered Official Mail from Thach -Tanh, January , 9th, 1957.” Interestingly the registered letter only carries the standard letter rate of 80 Dong which means that Official Mail was exempted from the surcharge for registration. The letter was addressed to Hanoi and according to the arrival cancel it only took two days to get there! Than Hoa transit cancel on the reverse. Exceedingly rare! 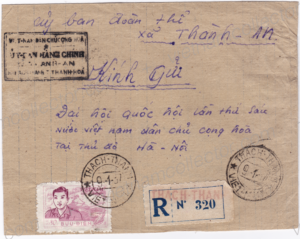 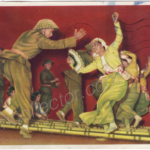