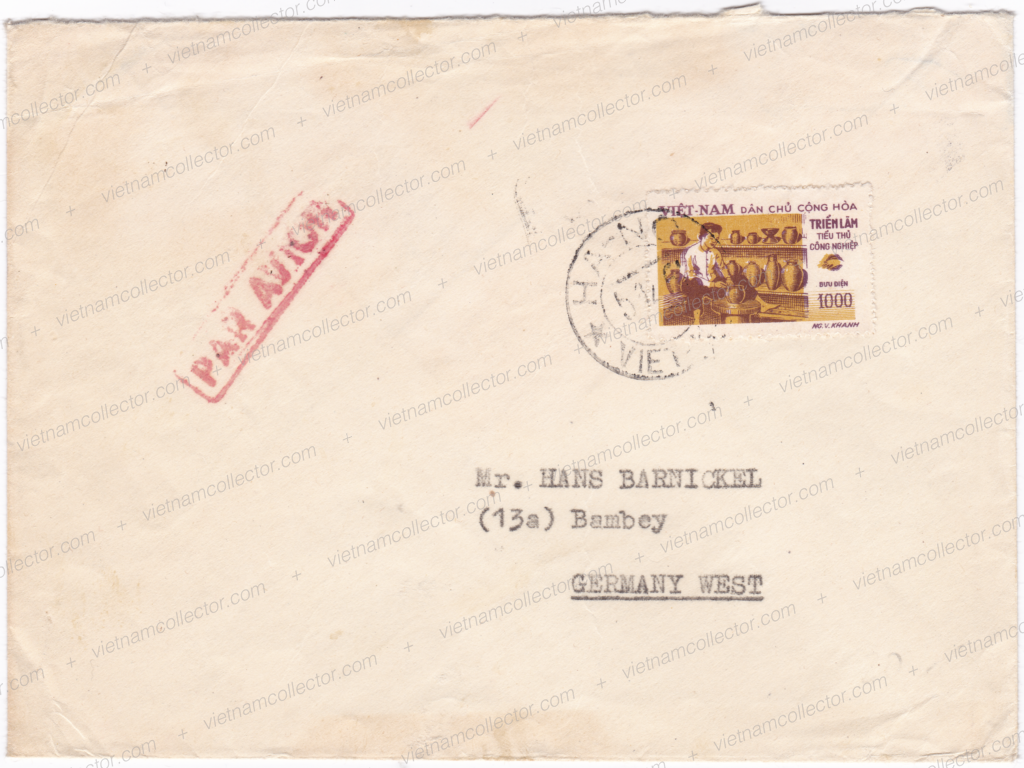 North Vietnam, Anti Illiteracy Campaign, January 6th, 1958, Michel Nr. 67-69; At the end of 1957 the standard domestic letter rate increased from 100D to 150D. As a result the postal authorities issued three new stamps in the nominals of 50D, 150D and 1,000D to promote the anti illiteracy campaign started by the Government. The sheets contained 100 stamps each. It was Ho Chi Minh’s position that the French had kept the local population uneducated in order to make it easier to rule over them. Now, that the French were gone he obviously had to address the issue in order to not look hypocritical. Concrete statistics about illiteracy in Vietnam in the 1940’s and early 50’s are not available but some scholars have estimated that during the French rule 80-95% of the local population was illiterate (De Francis, 1977: 240). This and the general poverty of the population explains why local letters from that era are very scarce.  The campaign was apparently vastly successful as by the end of the 1950’s 93.4% of the 12 to 50 year old were literate (http://http://www.linguapax-asia.org/pdf/publications/literacy-for-dialogue-in-multilingual-societies-2011/083-091-shaun-kingsley-malarney.pdf). Again, catalogue makers do not agree on the perforation the set was issued with. Scott reports 12.5 while Michel and the Vietnamese Postage Stamp Catalogue report 13.0. In checking his sizable holdings the editor has actually found four perforation variations: 12.5, 12.75, 13.0:12.5 and 13.0, so clearly not all the them have found their way into the catalogues yet. It appears that the 12.5 perforation is the most common with all the others quite a bit scarcer. Because the perforation holes were very small, perforation on this issue is generally poor. Stamps with good perforation do warrant a surcharge.

Here is the complete mint set in perforation 12.5.

The editor also found a mint single of the 1,000D value that is perforated 12.75. This is the rarest of the perforation varieties based on empirical studies. 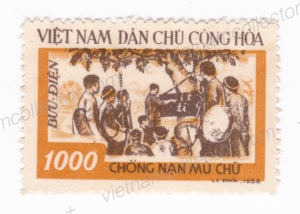 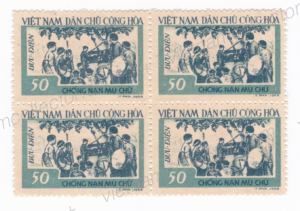 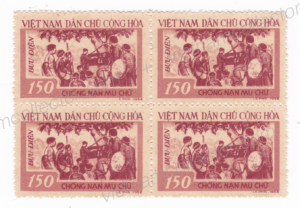 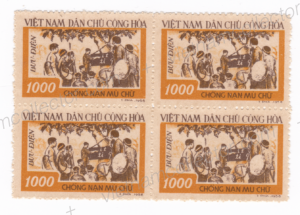 Color “kisses” do occur on some stamps when still wet sheets were stacked on top of each other leaving a mirror image on the reverse of stamps like on this stamp here. 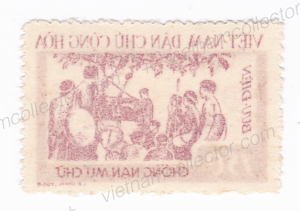 Most used stamps you will find are cancelled to order like this set perforated 12.5.

A lot more rare are postally used stamps like this pair that is perforated 12.5. They are at least ten times rarer than CTO stamps. 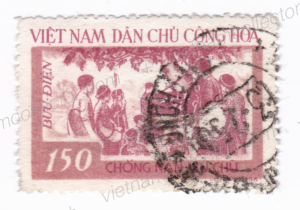 While the stamp on this letter is damaged on the left this is still a very rare single franking of the 150D stamp. It was mailed in April of 1958 from Cam Giay (small post office) to Phu To. Phu To arrival and Hanoi machine transit cancel on the reverse. Most local letters were destroyed in the multi-decadal war, destroyed by the tropical climate or by recycling due to raw material shortages. 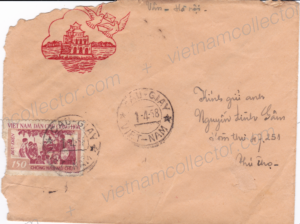 Complete letters are pretty scarce. Here is an air mail letter sent in January, 1958 to Czechoslovakia using a single stamp of the 50D extension value (Perf. 12.5) among other early NVN stamps for a total postage of 650D. 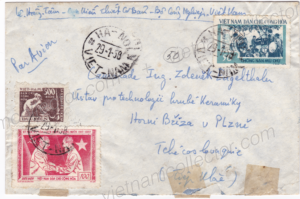 Mixed franking between normal stamps (including two of the 50D Illiterate Campaign stamps) and the complete set of the official Union Congress set on an envelope sent by a member of the East German Consulate to East Germany in February of 1958. The overall postage amounted to 1,100D. 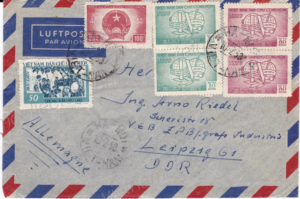 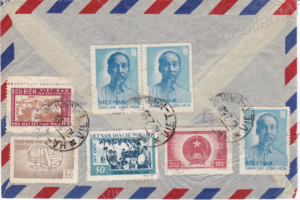 It appears that post cards sent by air mail had the exact same rate of 650D as seen here on a postcard sent to Czechoslovakia in March of 1958. The 150D stamp is perforated 12.5. 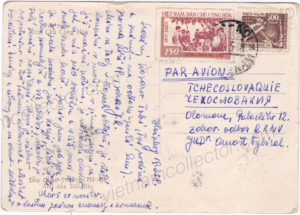 Here is another postcard from January of 1958 which only shows a postage of 550D, made up of a 50D Illiteracy stamp plus one 500D Production and Thrift stamp. This clearly shows that there was some variance on how postcards were actually franked. 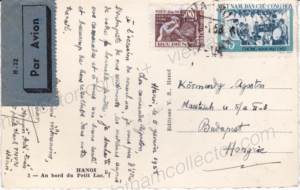 Here is a very similar letter, also with the 50D extension value (Perf. 12.5) along with other early NVN stamps for the standard surface letter rate to Eastern Europe of 300D. 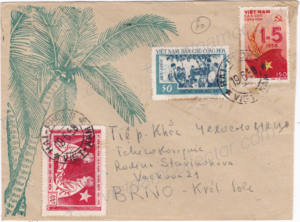 This is interesting mixed currency franking from September, 1959 sent by air mail to Poland. It carries one of the 50D extension value (perf. 13.0) worth 5 Xu in the new currency (the devaluation in March, 1959 of the old Dong was 1,000:1) along with two stamps issued in New Dong for an overall franking of 20 Xu. It is not clear why the rate to Poland by air mail was lower than to other Eastern European countries like Czechoslovakia but, in general,  we still know very little about postal tariffs in North Vietnam in the 1950’s. 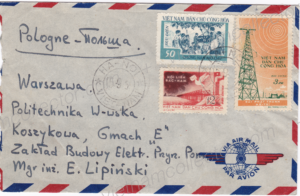 This letter is all franked in Old Dong but since it was mailed in April of 1960 to Czecheslovakia the mixed franking (that includes one of the 50D extension values perforated 12.5) of 800 Old Dong equated to 80 Xu in New Dong. Clearly this air mail letter must have been heavier than the standard 20g that cost 650 Dong. 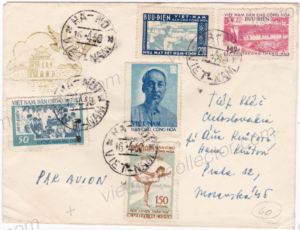 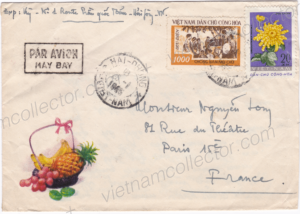 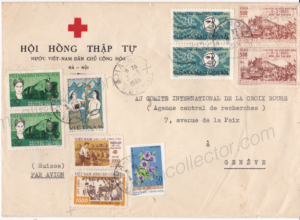 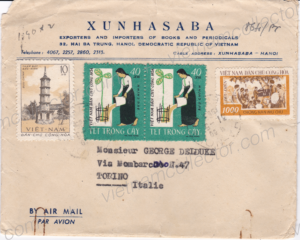 Rare Single franking of the 1,000D stamp on an air mail letter from Hanoi to Brno in Czechoslovakia mailed in June of 1959. 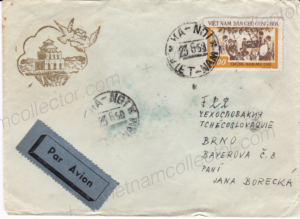 Package wrappers from the era are vertically non-existent as most of them were simply thrown away after the package was received or the stamps were cut out from the wrapper and taken off paper for collection purposes. So, while these package wrapper look mangled they still represent one of the rarest postal history items of early North Vietnam. The first registered package was sent June 8th, 1958 from Hanoi to Leipzig, East Germany and is frank with a pair of the 1,000D value (Perf.13.0) along with other early NVN stamps for a total postage of 2,160 Dong. You can see that the postage was annotated at the bottom lefty the postal clerk. However, the post office in Leipzig determined that the postage was in fact insufficient and they therefore attached a small label that stated “Vom Empfaenger einzuziehen” or “To be collected from recipient” . The East German clerk annotated 1,200D in pencil so the postage was 40D short. This was converted into 0.30 East German Pfennig. The package arrived on June 27th, 1958 so it only took less than three weeks to make the journey. The wrapper also carries the green hand stamp from the Leipzig customs office and a violet hand stamp from the Leipzig post office that states if there are any protestations (presumably if the content was damaged) the wrapper had to be presented long with the green customs card. 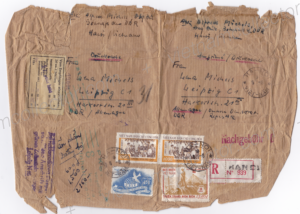 The second wrapper was also sent from Hanoi to Leipzig, East Germany on March 2nd, 1958. It was received on March 24th, 1958 or about three weeks after was posted. It was franked with a single of the 1,000D value and three of the 150D value (all Perf. 13.0) for a total postage of 1,970 Dong and, again, the postal clerk in Leipzig determined that the postage was insufficient.A label that stated “Vom Empfaenger einzuziehen” or “To be collected from recipient”  was attached and o.30 East german Pfennig were collected as postage due. Red hand stamp “Nachgebuehr” or “Postage Due”. Very rare despite condition issues. 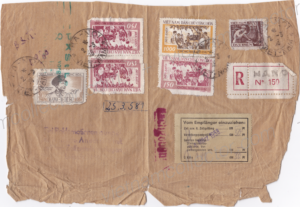 Registered air mail letter sent as mixed currency franking in April of 1985 from Ho Chi Minh City to Klewitz. The letter carries the Illiteracy Campaign set from 1958 which was devalued by 1,000:1 on March 1st, 1959 so worth only 1.2D. Together with the stamps from the Friendship, Harmful Insect and Union Conference sets the overall postage of the letter amounted to 53.89D (including the red free frank for 1.77D). Green Fulda custom cachet on the reverse.