Here is a cancelled to order set

Rare regional letter (ex Schwirtz) sent from Hanoi to Sihanoukville in Cambodia from March of 1960. Since the letters weight (20g) is annotated on the envelope this letter documents that the standard air mail letter rate amounted to 60xu at the time (the two stamps in Old Dong had been devalued by 1,000:1 on March 1st, 1959). The addressee was unknown in Sihanoukville so the letter was stamped with “Unknown” and “Return to Sender” and then returned to Vietnam. 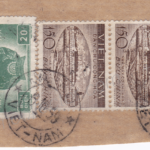 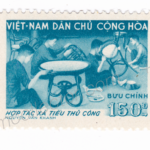