North Vietnam, 98 Years International Red Cross, May 8th, 1961, Michel Nr. 162-163; Two stamps were issued in perforation 11:0. One with a nominal of 1 xu (extension value) and one with 12 xu (standard domestic letter rate). Again these stamps come wither on horizontally ribbed and vertically ribbed paper, depending on the direction the paper was fed into the printing machine. There is no difference in value.

Here is a mint pair with horizontal ribbed paper: 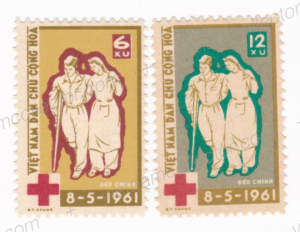 Color errors do occur. Here is a 6 xu stamp (ex Klewitz) that has a background that is olive-yellow in color as compared to olive-orange on a normal stamp. 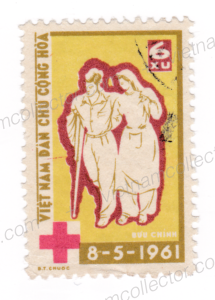 The error stamp is on the right. The left stamp is of the normal background color. 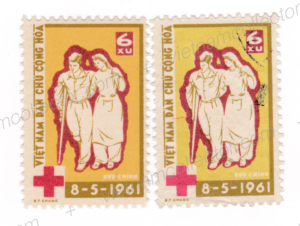 Here is a letter (ex Klewitz) that features the complete set of stamps mailed in May of 1961 to West Germany. The 18 xu franking was insufficient as the standard letter rate to Western Europe at the time was 50 xu but it apparently was transported without any penalty. This is probably because the sender wrote “CHDC Due” at the bottom of the address which stood for East Germany. The standard letter rate to East Germany was only 12 xu. Note the error in the hand cancel. The “1” in “61” is upside down. 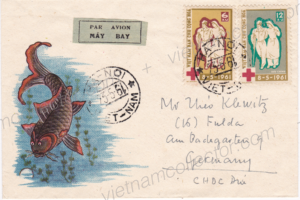 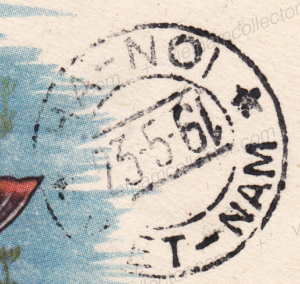 Rare single franking of the 12xu stamp on a postcard sent from Hanoi to Hungary in August of 1961. Note that the cancel shows the same error as above (upside-down 1 in 61). The sender of the card was apparently not aware that the postcard postage (6xu) was not identical to the letter tariff (12xu) so paid too much postage for the sending. 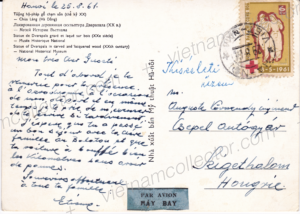 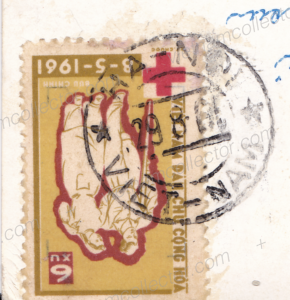 This is a registered letter mailed to Klewitz in June of 1961. It contains a single 12 xu stamp of the Red Cross issue and  a number of other 1961 North Vietnam postage stamps for an overall franking of 73 xu. This would appear to be insufficient postage as the standard letter rate to Western Europe amounted to 50 xu and the international registration fee was 60 xu, nevertheless the letter was registered and transported without any penalty. This probably was caused by the fact that the sender wrote “CHDC Due” at the bottom of the address which stood for East Germany. The standard letter rate to East Germany was only 12 xu. Please note the stamp set commemorating the First Space Flight was used perforated and im-perforated. Im-perforated stamps on postally used covers are very rare. 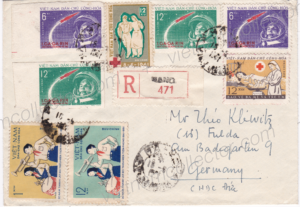 Very rare express mail letter sent to Klewitz in August of 1977. It carries some of the im-perforated dragon fly stamps plus other NVN stamps. There are also two of the Red Cross stamps. Im-perforated stamps on postally used cover are very rare. The overall postage amounted to 3.71 Dong. Bad Nauheim transit and Fulda arrival cancels on the reverse. 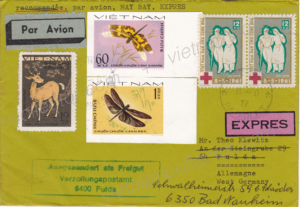 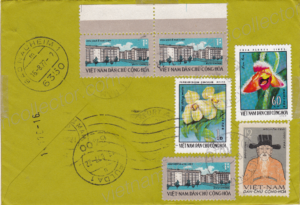 Rare registered express mail letter sent to Klewitz in September of 1980. It carries a variety of NVN stamps including one of the Red Cross stamps. Green Fulda custom cachet on front. Hand -made Express Label. 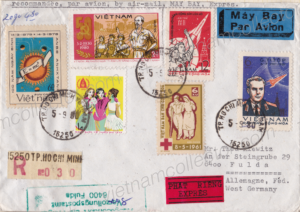 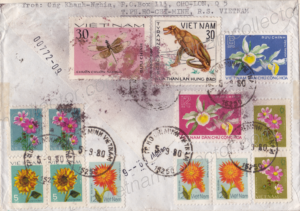 Rare registered express mail letter sent to Klewitz in December of 1980. The letter carries two of the 1 Dong Day of the Child stamps plus two 6 xu Flower stamps (one with and one without the designer name). It also shows a 2 Dong Lenin National Liberation Front (Vietcong) issued in 1970. NLF stamps were denominated in South Vietnamese Dong and hence they were not valid for postage in North Vietnam. Nevertheless it appears that the postal clerk did not object to the invalid stamp. There is also one of the Red Cross stamps. The overall postage amounted to 5.01 Dong. Fulda arrival cancel on the reverse. Green Fulda custom cachet on front. 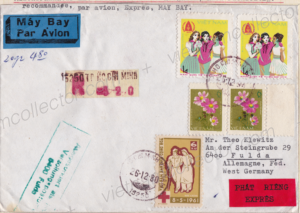 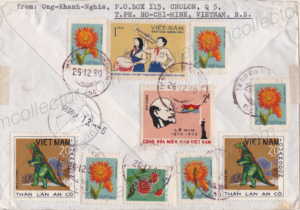 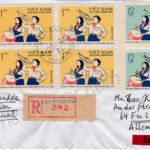 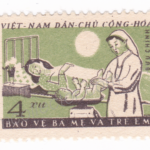