North Vietnam, 2.Congress of the Labor Union Association, February 10th, 1961, Michel Nr. 151; A single stamp with a nominal of 12 xu (standard domestic letter rate) was issued in perforation 11:0. The stamp comes on horizontally and vertically ribbed paper. One can only tell the differences in paper by looking at the back of the stamp and by holding it into good light. The ribbing was a function of the direction the paper was inserted into the printing process. The stamp was issued in an edition of 1,500,000. Below is the official Xunhasaba bulletin issued on occasion of the stamps release. 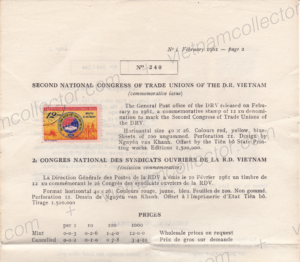 Here is a block of four with horizontally ribbed paper. The numbers at the top selvage are value indicators that were intended to assist postal clerks in calculating overall cost of a purchase. The top selvage listed the overall cost for the stamps in the first row (one stamp cost 0.12 Dong, two stamps cost 0.24 Dong etc). 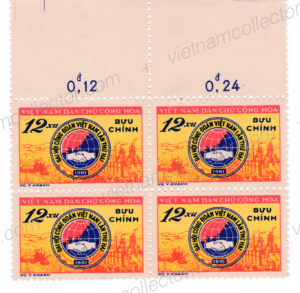 Here is vertically ribbed mint pair from the bottom left of the sheet. The numbers on the right selvage showed the entire cost of a row of stamps (0.60 for one row of 5 stamps, 1.2 Dong for two rows of 5 stamps, etc.). The “5” at the bottom indicates the row number (in this case the 5th row in the sheet). 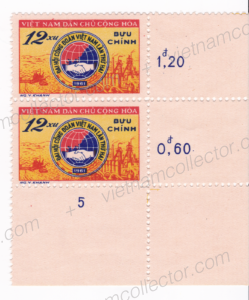 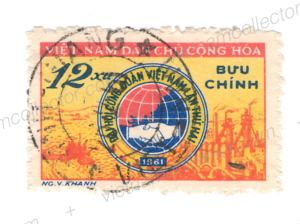 A color variation is known from the Klewitz collection. Here the blue color in the medallion is not dark blue but ultramarine (a lighter shade of blue). 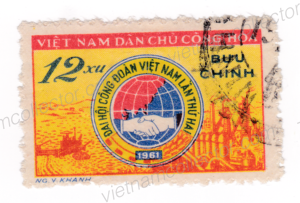 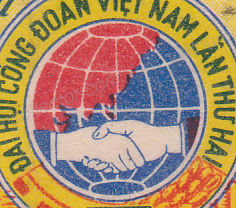 This is a First Day Cover (ex Klewitz) that was actually sent through the mail. It is only franked with 12 xu which is too little postage for West Germany . The standard letter rate to West Germany was 50 xu so the letter was under-franked by 38 xu. However, no postage due marking were applied and no postage due ever collected. This was most likely caused by the sender writing “CHDC Duc) which stood for East Germany. The standard letter rate to fellow socialist countries amounted only to 12 xu, so in the eyes of the postal clerk the franking was just perfect. 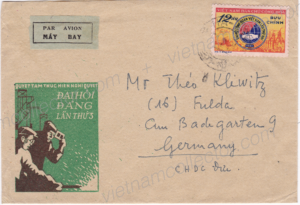 Rare single franking of the 12xu stamp on a letter from Hanoi to Czechoslovakia in March of 1961. 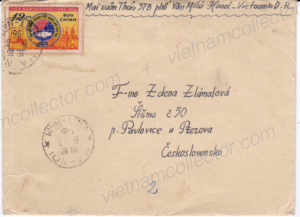 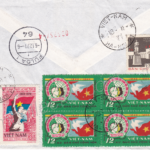 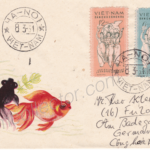